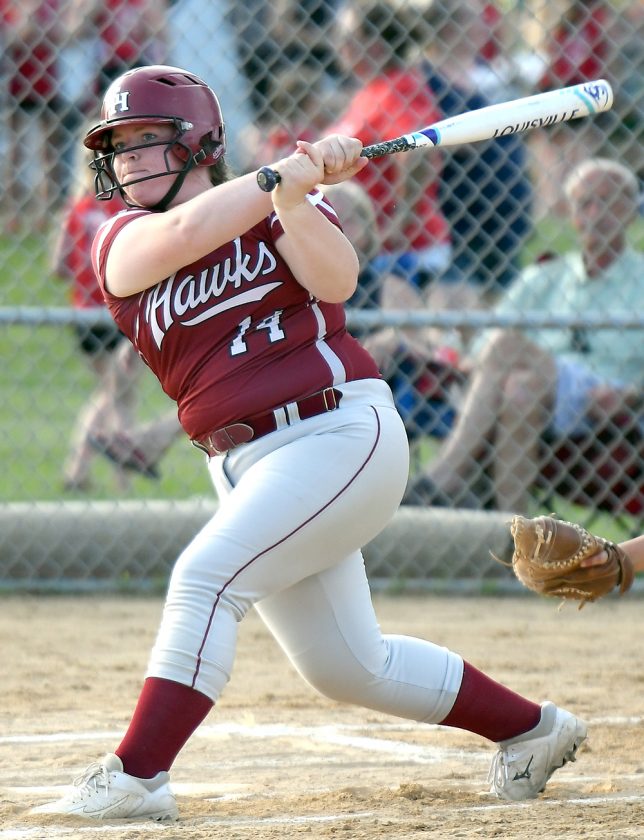 ALLEMAN — One pitch, one swing and goodbye.

Thanks for playing, North Polk.

Cortney Harris didn’t need much, just one Bailey Hougham offering right down the middle of broadway, and she sent it on a ride in the ninth inning here Friday night. Her two-run home run broke up a 4-all tie and propelled South Hamilton to a key Heart of Iowa Conference road victory, 6-4.

“It was no doubt it was over the fence,” South Hamilton head coach Harry McMaken said of Harris’s dinger, her second of the season. “It was so sweet and for her it’s so cool.”

What could have been a night of bitter disappointment was saved by the long ball. South Hamilton (9-2, 6-1 HOIC) led 4-1 after 61⁄2 innings, only to watch North Polk (7-7, 4-1 HOIC) plate three runs in the bottom of the seventh to force extra innings.

“The girls felt they had it won going to the bottom of the seventh, but then the momentum shifted,” McMaken said. “But the girls just stayed calm. They were determined to win this game and that was really nice to see that kind of character.”

Jessi Harms was a standout in the pitcher’s circle. She went eight innings for the Hawks and sat down eight on strikes. Taylor Volkmann took over in the ninth to earn the save. After allowing a lead-off single, Volkmann struck out the final three batters.

South Hamilton out hit North Polk 12-10, led by Volkmann and Breanne Diersen who were 3 for 4 and 3 for 5, respectively. Harris had two hits and drove in a game-high three runs.

Trailing 1-0 after five innings, the Hawks scored twice in the sixth and two more in the seventh to take the three run lead.

Back-to-back infield singles by Harms and Hailey Diersen produced runs in the sixth. Harris drove in her first run on a seventh-inning ground ball and Skartvedt followed with a RBI sac fly to right field.

An Ellie Owen double to lead-off the seventh ignited North Polk’s late rally. The Comets had three extra-base hits in the game.

HAWKS DROP 2 AT VAN METER: South Hamilton came home from the Van Meter softball tournament with a pair of losses on Saturday.

Krista Swenson drove in both South Hamilton runs against Treynor (9-1) with a sixth-inning single. Breanne Diersen, Jessi Harms and Hailey Diersen all singled as well.

Treynor pitcher Sydni Huisman struck out 13 batters. She also smacked two hits, drove in two runs, and scored the winning run in the eighth on a wild pitch.

Taylor Volkmann accepted the loss in the circle. The Hawks’ senior struck out eight.

South Hamilton out hit St. Edmond (5-7) 8-5, but the Gaels plated three runs in the second inning and never looked back.

Harms went 2 for 3 with a double and triple, while Cortney Harris had two singles and an RBI in the loss. Lily Skartvedt singled and had two RBIs. Emma Lewis and Breanne Diersen both ripped doubles and Volkmann added a single.

Harms worked four innings in the circle and took the loss. Volkmann came on in relief in the fifth inning.