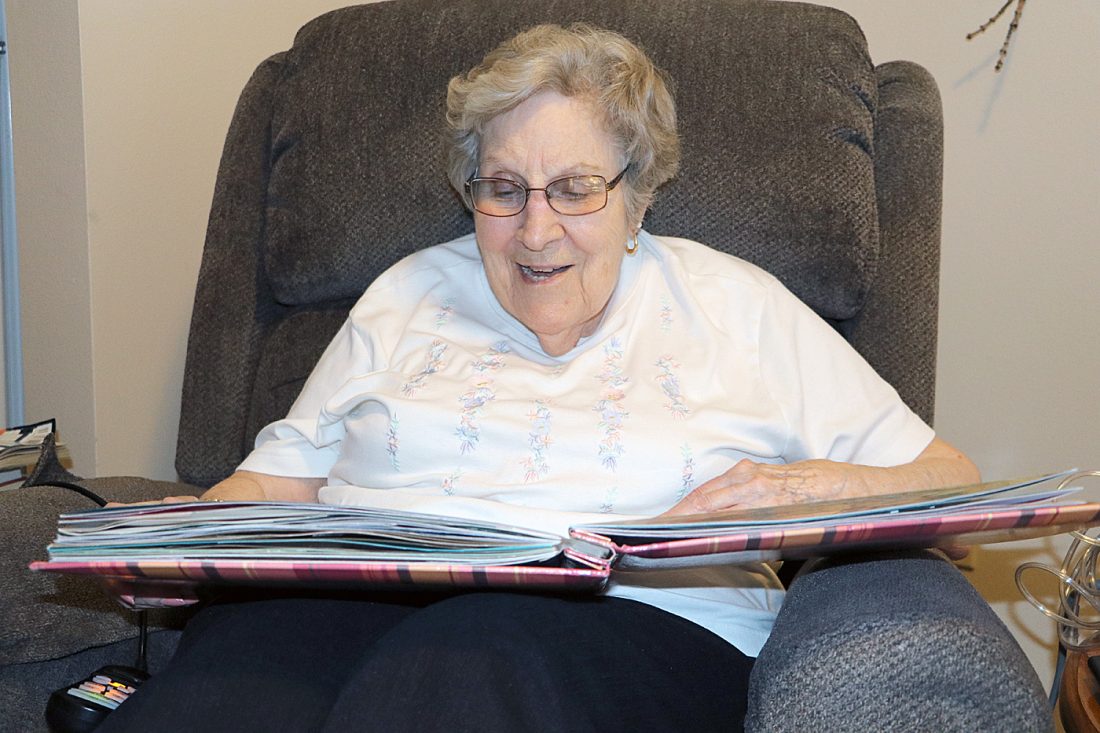 Cleta Cupp is not a native of Webster City, but the 89-year-old Windsor Manor resident certainly played a crucial role in preserving an important part of the community’s history.

“It was a real fight,” Cleta recalls of the 1990s when as president of the Webster City Women’s Club, she helped lead the charge to save the Jane Young House and keep it close to where it’d had always been in the town.

“I wish I’d have written it all down,” Cleta said now, thinking about how impressive the story might be for future generations.

She didn’t have time to write everything down back then, but a few of her memories from that time are clear.

The city had decided to build onto the library. “They wanted the lot where the Jane Young House stood,” she said, for the proposed expansion.

Cleta had been a member of the Webster City Women’s Club for a few years, and a good friend, Erma Flygstad, convinced her to take over the presidency of the 100-plus-member group. It happened at about the same time that the city was discussing the future of the Jane Young House.

At a meeting of the Women’s Club – a club that still exists to maintain and plan events for the Jane Young House – “it came up that the city had been talking about this, and one lady said, ‘How many of us are going to do anything (about it) at our age?'”

That’s all that needed to be said, according to Cleta. She and a few others were going to do something about it. They knew the city-owned two other houses and lots in that vicinity, and they wanted to keep the Jane Young House standing on one of those, to be close to its original location.

“We got out and got 1,100 names on a petition and took it to a city council meeting.”

It was a big meeting, with many in attendance, she recalled. “One of the women took out a full-page ad in the newspaper (regarding efforts to save the Jane Young House),” Cleta said. And that wasn’t all.

“We gave out pins, took donations of any amount.” Supporters even got involved with the famous artist, P. Buckley Moss, who painted the Jane Young House. The local radio station helped as the paintings were auctioned off. “We had two $500 bids … we got some really big money on those.”

The Women’s Club surprised a lot of people, Cleta recalled, by raising enough money to have the house saved and moved to another lot.

Looking back on it, she’s not quite sure how she kept up with everything, including the fact that she was also finishing up as president of the Lutheran church women’s group at that time. But, she did. “I’m just a person that I’m going to finish something … I believed the house needed to be saved. It needed to be done, and I was not afraid to ask people to help,” she said. “I’m still that way. If I believe in something, that’s the way it’s going to be.”

Cleta grew up in the Paton-Dana area of Iowa on a farm. She went to Paton School until about fifth grade when her family moved into the town of Dana, and she attended school there. “I was one of three in the Dana Class of 1947,” she said.

She worked as a nanny for a local family after high school, saving money to attend Tobin Business College in Fort Dodge, and she eventually went to work for a Fort Dodge company as a bookkeeper.

She met her first husband, Roger Johnson, after being introduced to him by her friend, Eleanor Voss. Roger was a body shop worker and a farmer. He and Cleta had three children: Gary, Marty and Ranae.

“We were married 20 years,” Cleta said, noting that cancer took her first husband when he was just 42 years old, and she just 40.

Cleta and Roger had come to Webster City in 1966 for his work. Cleta worked in the office of that body shop for a time, then went back to working as the manager of a company called Your Inc. out of Fort Dodge. Eventually, that company set up an office in Webster City, and Cleta no longer needed to commute.

Cleta married her second husband, Ernie, in 1974. Ernie had a gas station business in Webster City.

Eventually, the couple was looking for something new to do, and they had the opportunity to buy the flower shop by the old hospital. Cleta’s daughter-in-law, Gloria, had experience in floral arrangement and could help them. “So we did it,” said Cleta, and she loved the work.

“I had always loved interior design and that kind of thing,” she said. She learned to make beautiful floral arrangements. In fact, she helped design two floral arrangements that are prominently displayed this winter in Windsor Manor’s front lobby. “I’d still be doing it today if I could. My hands don’t want to cooperate anymore.”

Her love of interior design and floral arranging and her instinct to fight for things she believes in came together beautifully during her time with the Webster City Women’s Club and the Jane Young House Foundation.

“I loved that we were doing so many things to save the house and maintain it,” she said. She remembers fondly the work of wallpapering and painting at the Jane Young House, much of the time with her good friend Martha Bentley.

“We had old, heavy green drapes, and we took them all down. We had floral wallpaper that had come from England – very expensive. I couldn’t climb up, so Martha would get up there, and we’d figure out which wallpaper flower needed to go where,” said Cleta, explaining that they specifically placed some of the floral wallpaper elements to cover where the curtain rods had been. “We had so much fun.”

Recently, some of today’s members of the Webster City Women’s Club’s presented a program at Windsor Manor. Cleta was front and center to see the pictures of all the work that’s been continuing. “I was interested in all of it. I think they’ve done a great job,” Cleta said.

She knows many of the women who are in the group today… some had started toward the end of her membership. She’s thankful that the work of the Women’s Club in preserving the Jane Young House is ongoing.

“I thought it would just be forgotten because there were no young people in the group for a while. But, by the time I quit (the women’s group), they were starting to get going with some younger members,” Cleta said.

In her opinion, preserving history is an essential undertaking for any community. “Its value is for our future children. They need to know (the community’s history) and study it.”

During the fight for the Jane Young House in her day, Cleta also became convinced that she wasn’t alone in her love for history and preservation. She saw incredible support for saving that home of Kendall and Jane Young, early residents of Webster City.

“I think people really want their historic places to be preserved. The fight to save that house, that piece of history, that was the main part of my involvement in the women’s club. And I have no regrets. It was definitely worth it.”