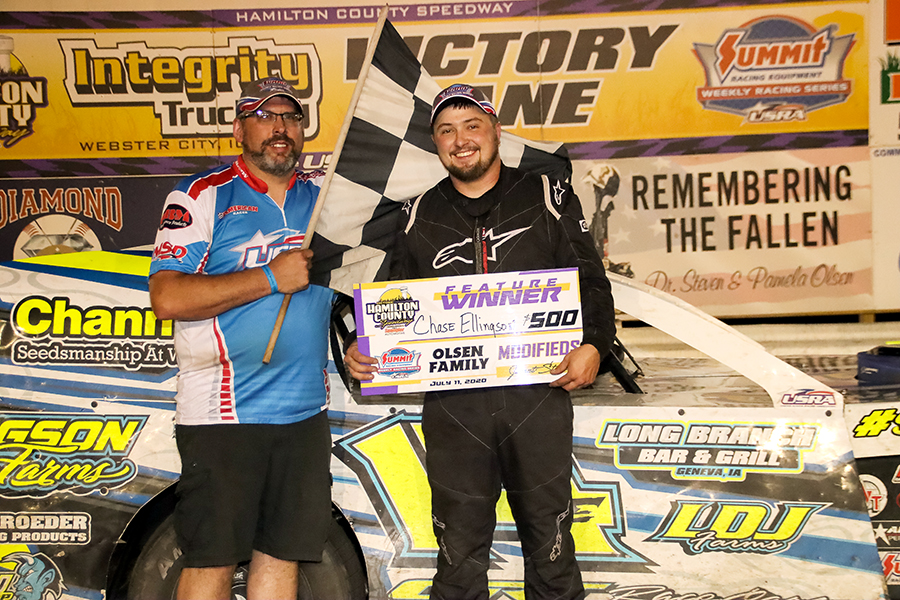 Besting a dozen others was Jeff Aikey of Cedar Falls as he held off seventh-starting Charlie McKenna of Ames to claim the victory. Ryan Griffith of Webster City, who started ninth, finished third followed by Curtis Glover of Knoxville and Paul Conrad of Colo.

Scott Olson of Blairsburg wound up third, while a pair of long travelers — Kollin Hibdon of Pahrump, Nevada, and Dylan Thornton of Orcutt, California — rounded out the top five finishers.

The Stein Heating & Cooling USRA B-Mods featured the third racer of the night to win from the front row when Jason Bass of Fort Dodge took the checkers while Ty Griffith, who started 11th, became the third driver to start deep in the field and claw his way to a second-place finish.

The Diamond in the Rough USRA Hobby Stocks welcomed a familiar face to Integrity Trucking Victory Lane as Eric Stanton of Carlisle picked up the win over ninth-starting Scott Dobel of Manly.

Jade Lange of Humboldt continued his impressive run in the MyRacePass USRA Tuners by picking up another win over Matt Oberhelman of Fort Dodge, Ryan Bryant of Mason City, John Gill of Marshalltown and John Dahlsten of Pomeroy.