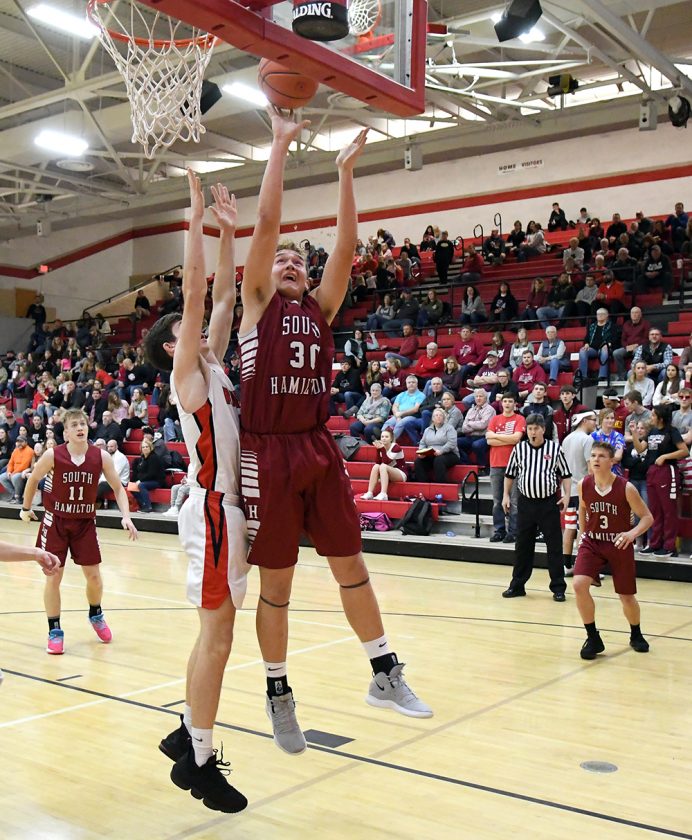 JEFFERSON — Matt Juber’s career as a head coach was all of five quarters old when he found himself experiencing a case of deja vu Friday night.

One quarter down. Twelve points up.

Only this time, he made sure his players knew it wasn’t the time to let their feet off the gas. In fact, it was time to go faster. And that’s exactly what they did.

South Hamilton led Greene County 21-9 after one quarter — the exact same score as the Hawks’ season opener against South Central Calhoun last Tuesday, a game that fell apart after that, which resulted in a 65-41 Titans’ victory.

But unlike in the opener, there was no let up. The Hawks extended their lead to 20 points at the half and steamrolled the Rams after the break as well for a 71-27 win, which was also Juber’s first chance to experience a triumph as the guy in charge. 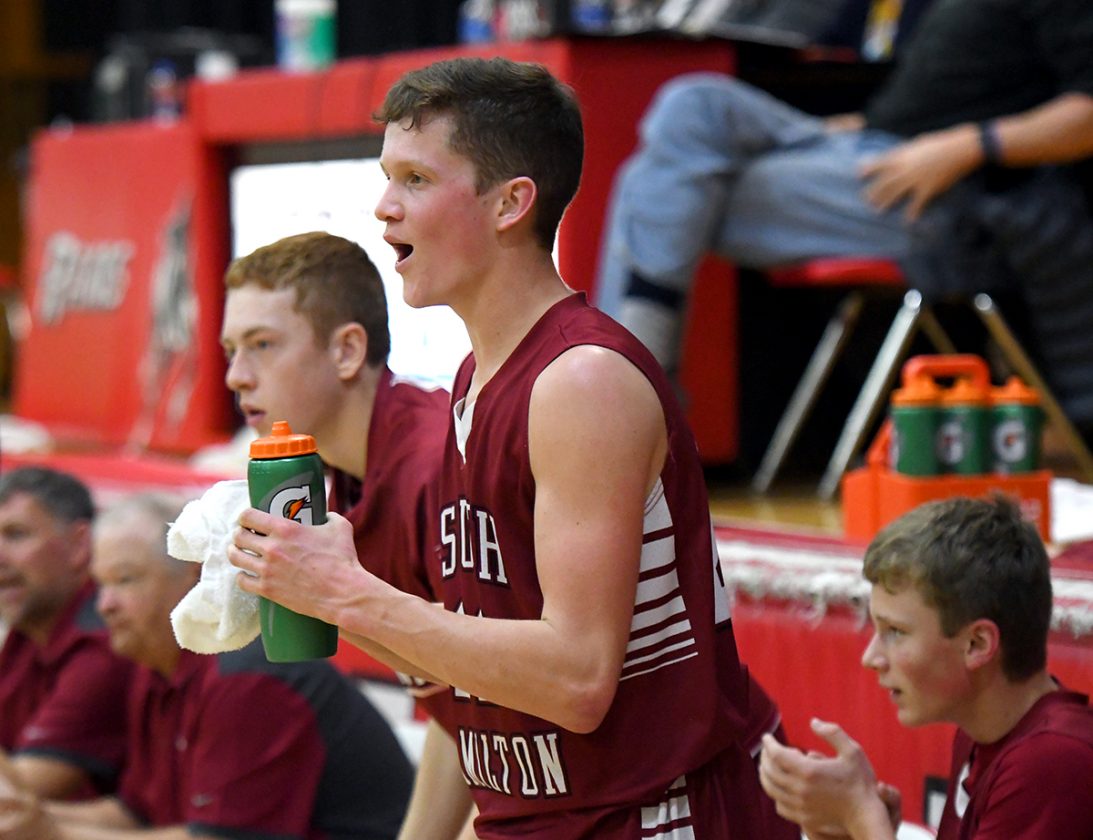 Kyler Hodnefield gets off the bench to celebrate a bucket by teammate Austin Busch during the late stages of South Hamilton’s 71-27 rout of Greene County on Friday in Jefferson. DFJ photo/Troy Banning

“It feels good and I’m happy for the kids,” Juber said. “They had a small taste of how good they could be (against SCC), but then it went downhill fast. So I’m proud of them because they came out (on Friday) and put a four-quarter game together. They know deep down that’s what they have to do.”

The minute Juber spent with his players in the huddle between the first and second quarters was poignant. He saw the score. He understood the situation. And he made sure his players got it too.

“Coming off Tuesday, we had a sour taste in our mouth,” Juber said. “I challenged the guys in practice the next day and asked ‘are we going to learn from it, are we going to be motivated to improve, or are we going to let the highs and lows dictate how we play?’ So that’s what I reminded them (on Friday) when they came over at the end of that first quarter. It was the same situation and it could have gone one of two ways.”

With a pair of 6-foot-5 centers — starter Cade Balvanz and reserve Carter Hewitt — at its disposal, South Hamilton (1-1, 1-0 HOIC) fed the beast, so to speak, relentlessly against the undersized Rams (1-2, 0-1 HOIC). After a six-point opening period, Balvanz poured in eight more in the initial three minutes of the second on his way to a game-high 17. 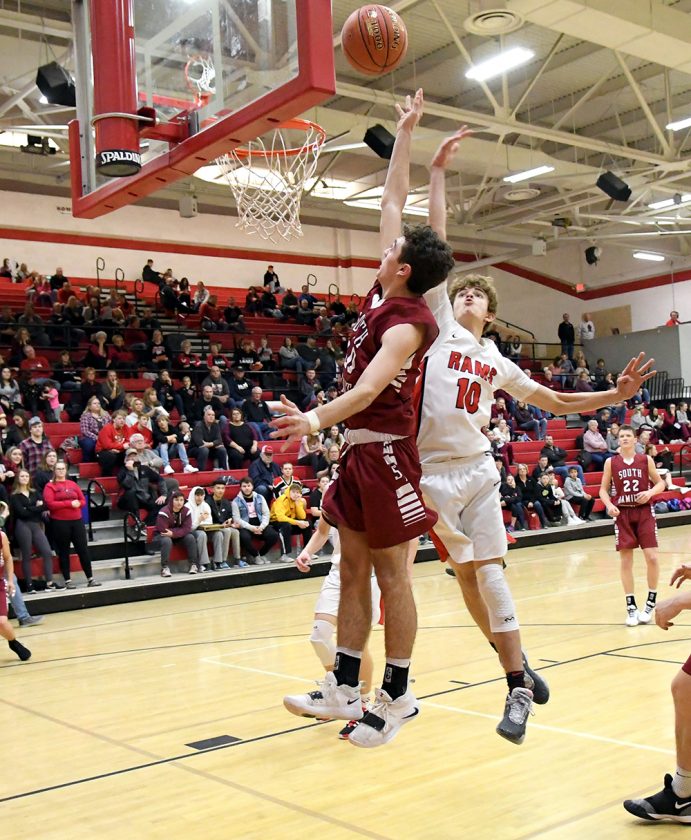 “We have an advantage almost every night with our size, so we have to be ready to play inside-out,” Juber said. “The guys knew what we had and they did a good job for the most part of spacing the floor and looking into the bigs.”

And the rebounding, it wasn’t even close. The Hawks had just three fewer offensive boards than Greene County did total rebounds. South Hamilton finished with a 43-17 edge, led by Quinton Grove with 11. Balvanz and Doran Lutjen had seven each.

Carter Morton had 11 for Greene County, but he had to work for every scrap he got. Grove blanketed him early on and others shifted onto him as the game progressed.

“We started Q (Grove) on Morton just so we made sure he didn’t get going early, but everyone else knew they were going to have a chance at him,” Juber said. “With the offense we have to replace this year, we need Q there too. We can’t burn out his legs just on defense, so we have to have guys willing to step up.” 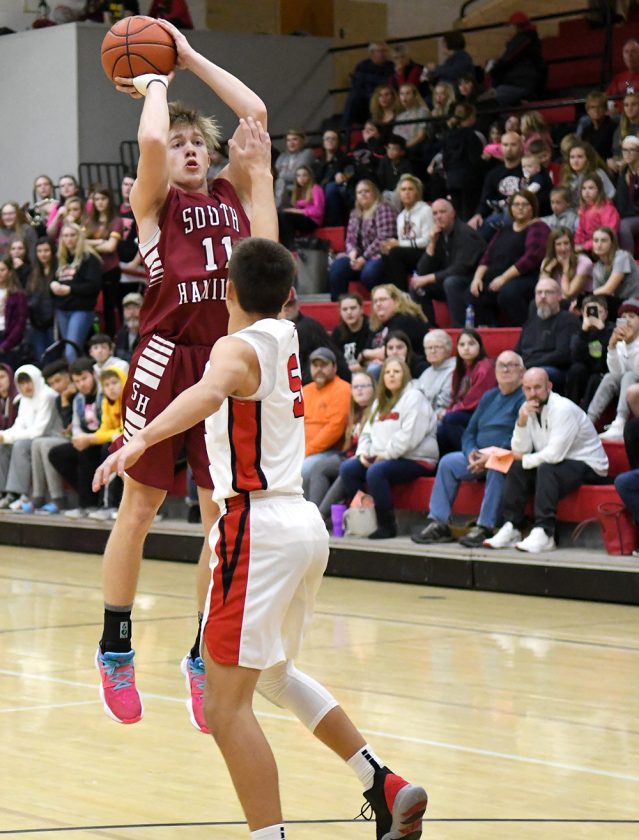 South Hamilton’s stingy defense limited the Rams to just nine field goals and 23 percent shooting. The Hawks connected on 43 percent of their attempts.

The 20-point halftime cushion quickly increased early in the third on back-to-back buckets by Lewis. South Hamilton outscored the Rams 22-5 in the third, aided by a pair of triples from Hegland late that extended the margin to 35 points.

The entire fourth quarter was played under a running clock.

South Hamilton will play in front of its home crowd for the first time on Tuesday when it welcomes rival Roland-Story to Jewell for a 7:30 p.m. tip-off. 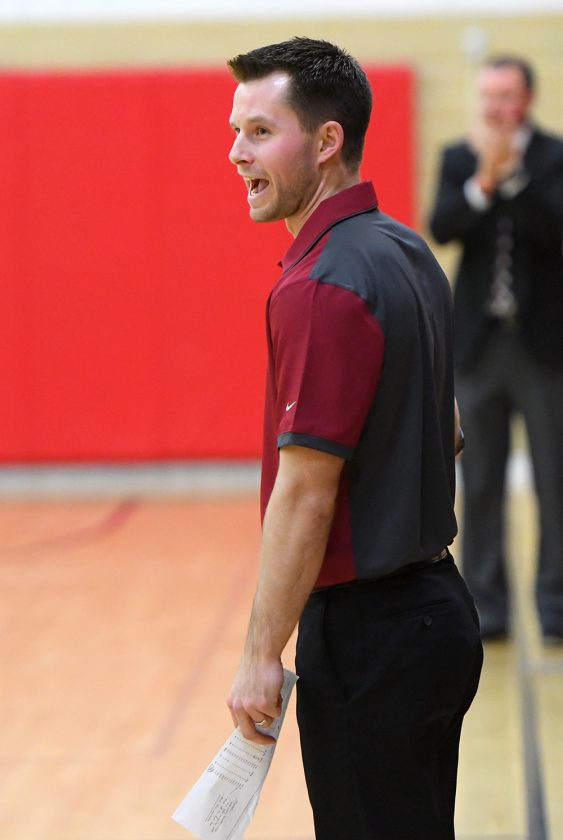 Kyler Hodnefield gets off the bench to celebrate a bucket by teammate Austin Busch during the late stages of South Hamilton’s 71-27 rout of Greene County on Friday in Jefferson. DFJ photo/Troy Banning