Lynx have exceeded expectations, and OL a big reason why 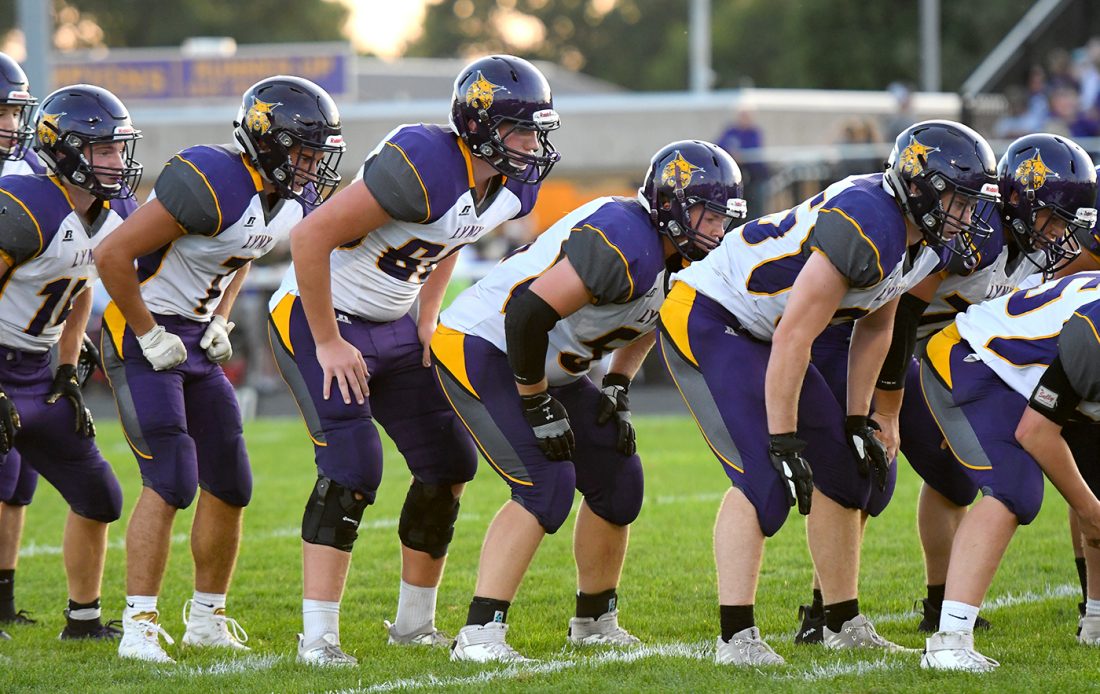 Webster City’s offensive linemen and running backs line up behind center Casey Kolbeck before breaking into formation against Spencer back in September. The rapid growth of the Lynx line has been a big reason for the team’s 5-2 record entering tonight’s homecoming game against Dallas Center-Grimes. DFJ photo/Troy Banning

WEBSTER CITY — This was supposed to be a transition season. That’s a nice way of saying a rebuilding season, but nevertheless, pretty much everyone predicted that a winning season probably wouldn’t be in the cards for the Webster City football team.

There were so many holes to fill, a depleted roster and a gaggle of questions that simply didn’t have answers when camp began in late summer.

Lynx head coach Bob Howard very rarely wavers; he wants and expects to win every game. But even the Hall of Fame coach with 340 career victories had his doubts in the lead-up to the season.

“At this point, I thought we could be anywhere from 7-0 to 1-6 … I really didn’t know,” Howard said this week as he prepared for one of the toughest tests of the season — tonight’s homecoming showdown with ninth-ranked (Class 3A) and co-district leader Dallas Center-Grimes (6-1, 3-0). “We had a lot of young kids that were going to have to step up.” 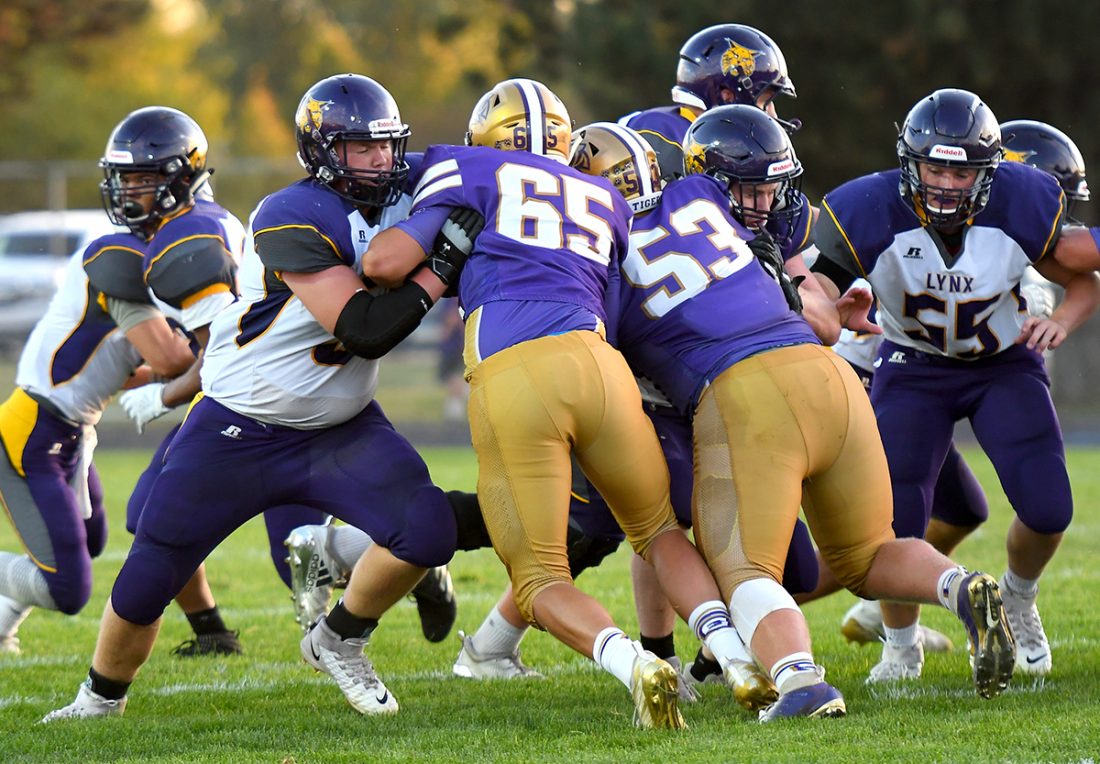 WCHS offensive tackle Beau Klaver (left) sets the edge on a running play against Spencer in September. The Lynx have the No. 2 rushing offense in Class 3A. DFJ photo/Troy Banning

WCHS (5-2, 2-1) enters tonight’s 7:30 p.m. kickoff with a winning record locked up. There’s still an outside shot — it’s remote, but a shot — the Lynx can reach the state playoffs as well if they win out and get lucky.

But whatever happens in the final two games, when the final chapter is written on the season, it will be one of success and, yes, surprise.

So how has WCHS gone from a predicted doormat to a playoffs contender? Howard has his theories.

“The offensive line has kept getting better every game with a bunch of young kids and a bunch of inexperienced kids,” he said. “They’ve been a big part of it because we’ve been able to run the ball against basically everybody.” 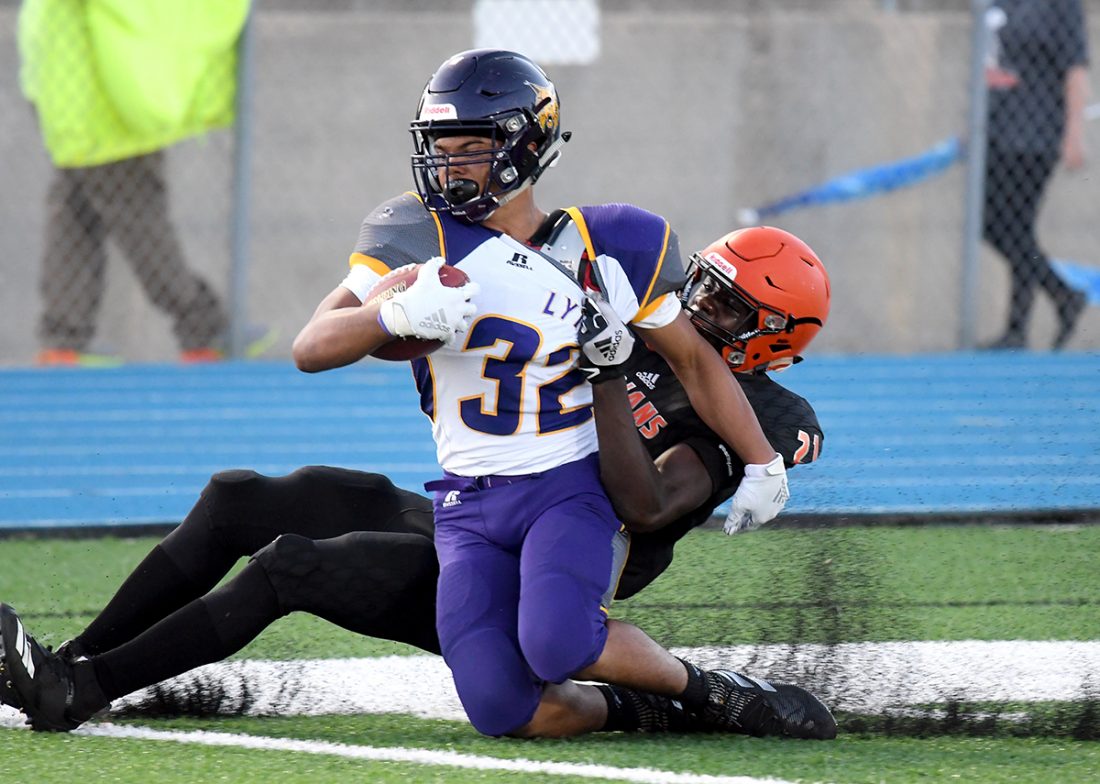 WCHS tailback Trey Mathis (32) gets ripped to the turf from behind against Waterloo East last month. Mathis leads Class 3A District 2 in rushing and is No. 2 in the class. DFJ photo/Troy Banning

Only center Casey Kolbeck, a senior, is a returning starter up front. Guard Will Tasler, another senior, missed all of last season. Junior tackle Trey Shannon, sophomore tackle Beau Klaver and sophomore guard Truman Klein are all first-year starters, as is sophomore tight end JJ Moore. Throw in junior blocking back Jack Van Diest and WCHS has a group that knows how to do its job.

They haven’t just been up to the challenge though; they’ve thrived. And the proof is in the numbers.

WCHS boasts the No. 2 running game in 3A with 2,055 yards, trailing only fourth-ranked and unbeaten Independence (2,109 yards) by a slim margin. The Lynx haven’t been held below 200 yards on the ground in a game this season, have twice topped 300 yards and put up a season-best 408 in last week’s 27-21 road win at Humboldt.

“I wasn’t sure before the season started how fast the line would come around,” Howard said. “They’ve still got a long way to go, but they’ve played pretty well.”

It doesn’t hurt to have quality ball carriers and WCHS has two that are capable of breaking a big play at any moment.

Junior star-in-the-making tailback Trey Mathis is No. 2 in 3A with 1,102 yards and leads the class with 21 touchdowns. He has six games where he’s topped 100 yards — he fell short against Perry simply because the Lynx didn’t need him to carry the load in a 50-13 rout — and gashed Humboldt for a career-high 306 yards seven days ago.

Senior wingback Garrett Whitmore has been the greatest of wingmen for Mathis. Whitmore has three 100-yard outings and is No. 3 in District 2 with 658 yards and six TDs.

“It’s obviously helped that we have a very talented back (Mathis) and a very fast back (Whitmore),” Howard said. “That’s two real threats in the backfield.”

The defense has more than held its own as well. It’s given up points, but also made plays, highlighted by junior defensive back Tyler Olson, who leads 3A and is second in the state with nine interceptions, just one shy of tying the single-season school record of 10, set by Dylan Steen in 2017.

The youth movement has been successful as well. WCHS has upwards of 10 freshmen and sophomores that play on a weekly basis.

“In 3A, we’ve been able to have the success we’ve had with as many young kids that we have against the same schedule we had last year,” Howard said. “Maybe they’re young enough and they don’t know any better, I don’t know. But all of our kids play hard.”

WCHS will have to play hard, and well, this evening against a DC-G team that has won six consecutive games since a Week 1 loss to Pella, 14-0. The Mustangs have the No. 4-ranked defense in 3A and have allowed 200 rushing yards to just one opponent this fall. They’ve limited three opponents to less than 100 yards on the ground, and last week Boone finished with minus-5 yards rushing.

So something has to give tonight.

“They’ve got a lot of speed on defense, but their biggest advantage is their numbers,” Howard said. “They pretty much two-platoon across the board, so they have separate scout teams.”

DC-G’s offense is led by junior quarterback Ty Walker, who has thrown for 791 yards and nine scores. Lead backs Luke Busby and Zach Brand have rushed for 315 and 253 yards, respectively, and they’ve scored a combined six TDs.

Walker was at the helm for the Mustangs a season ago when WCHS won the match-up, 35-21. Walker was intercepted five times in the game, including once by Olson.

A win would certainly keep the Lynx postseason hopes alive, but Howard says that’s of no concern in the hours leading up to kickoff.

“We’re just worried about the chance to beat a really good team and take another step,” he said. “But if we don’t play well we won’t beat them.”

Webster City’s offensive linemen and running backs line up behind center Casey Kolbeck before breaking into formation against Spencer back in September. The rapid growth of the Lynx line has been a big reason for the team’s 5-2 record entering tonight’s homecoming game against Dallas Center-Grimes. DFJ photo/Troy Banning

WCHS offensive tackle Beau Klaver (left) sets the edge on a running play against Spencer in September. The Lynx have the No. 2 rushing offense in Class 3A. DFJ photo/Troy Banning

WCHS tailback Trey Mathis (32) gets ripped to the turf from behind against Waterloo East last month. Mathis leads Class 3A District 2 in rushing and is No. 2 in the class. DFJ photo/Troy Banning