Too many mistakes for Lynx in district loss to Carroll 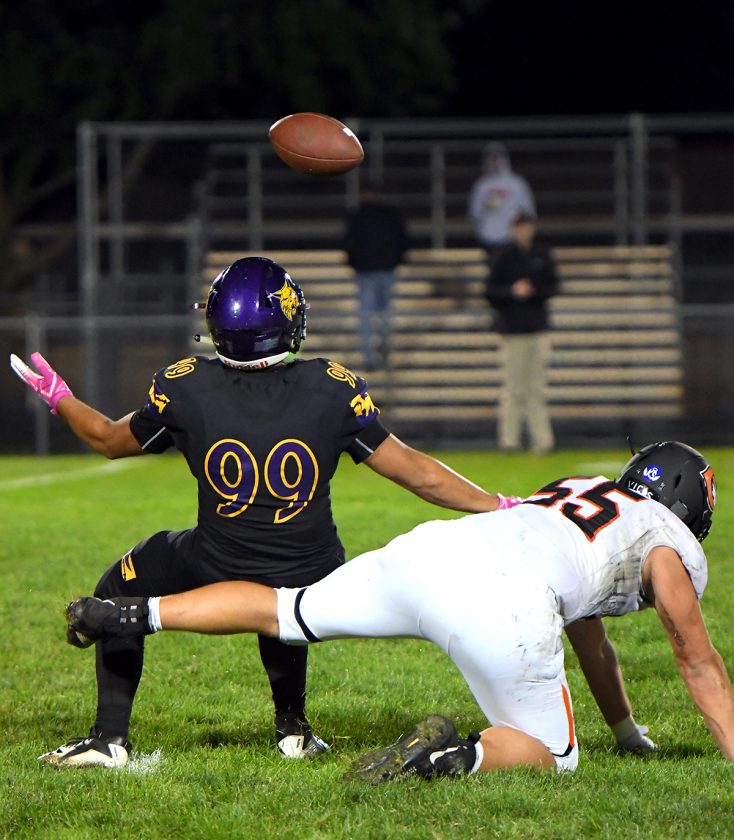 The ball sails through the air after Webster City punter J.J. Moore (99) had his punt blocked by Carroll’s Chase Gladden (55) late in the fourth quarter on Friday at Lynx Field. The Tigers scooped it up and ran it in for a touchdown to seal their 28-13 victory over the Lynx. DFJ photo/Troy Banning

WEBSTER CITY — Bob Howard was Forrest Gump and his Webster City football team was the box of chocolates at Lynx Field Friday night.

From one play to the next, the head coach never knew what he was going to get.

And against defending Class 3A District 2 champion Carroll, that simply didn’t fly.

Looking to fire quickly out of the district starting blocks, WCHS instead stumbled and watched Carroll feast on mistakes to claim a 28-13 victory. The Tigers (2-3, 1-0 District 2) have now won seven consecutive district games.

“A lack of consistency beat us (Friday night),” Howard said after WCHS (3-2, 0-1 District 2) dropped its second consecutive decision. “The offense was very inconsistent. I thought we were better prepared for that and I thought we were over some of that stuff. Obviously we’re not because that’s what bit us.” 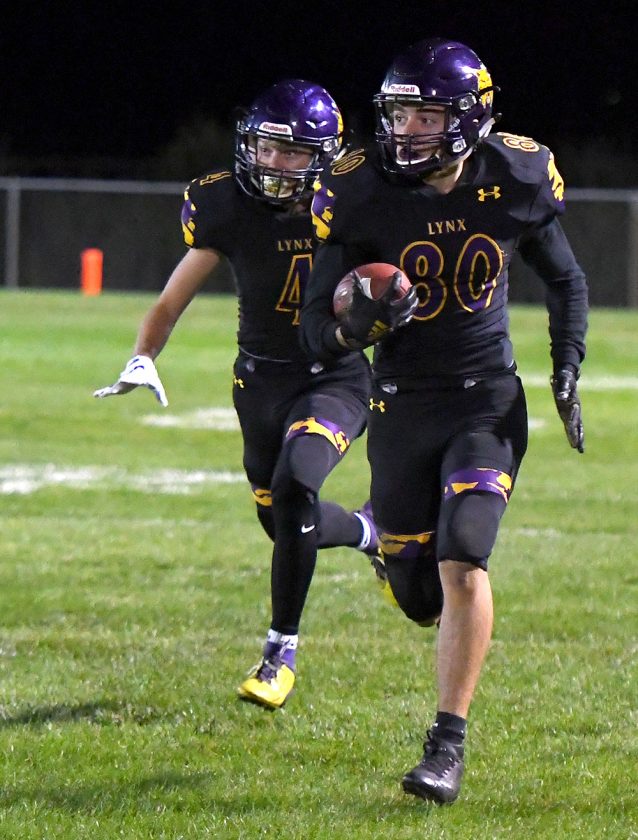 WCHS cornerback Tyler Olson (80) races down the field following an interception, his seventh of the season, on Friday. DFJ photo/Troy Banning

The glaring issues included seven penalties that cost WCHS 78 yards, including a block in the back that wiped out a Tyler Olson interception return for a touchdown, a pair of fumbles that were drive killers, an interception that gave Carroll a short field and — count ’em — 11 negative running plays that constantly put the Lynx behind the sticks.

And when you run a ball control offense predicated on consistently churning out first downs like WCHS, none of the above is going to work.

“It’s kind of hard when you start out first-and-15 every time,” WCHS senior blocking back Jack Van Diest said.

Howard took it a step further and said many of the wounds were self-inflicted.

“I don’t have a lot of great plays for first-and-20,” he said. “We need four yards a play and that doesn’t compute when three of the possessions in the fist half were first-and-20 or second-and-18, that ain’t going to work.” 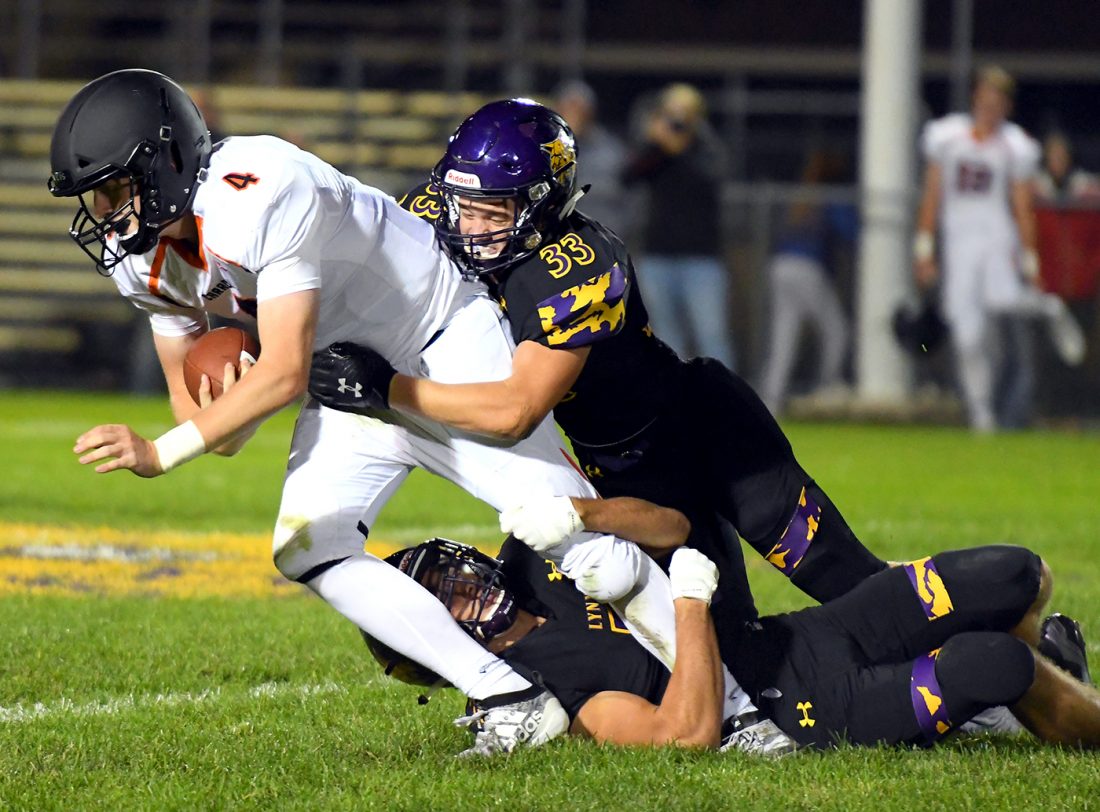 It started out so beautifully though, and that added to the frustration. On the game’s opening possession, WCHS marched 90 yards on 13 running plays and scored on a two-yard touchdown run by Trey Mathis. He had 32 yards on the drive and wingback Garrett Whitmore gouged the Tigers for gains of 33 and 15 on his way to a 57-yard drive.

The excursion ate more than 51⁄2 minutes off the clock and appeared to be a statement by the Lynx.

But over its final five first-half possessions, WCHS was thrown for a loss eight times. Whitmore’s last four carries before the break all went backwards and the Lynx never sniffed the end zone.

“There was a difference in discipline (by Carroll) after the first drive,” Whitmore said. “Consistency across the board is something we need to work on.”

Carroll’s pass rush made the Lynx offense one-dimensional as well. Spinback Gabe Humphrey was flattened on nearly every passing attempt, the first of which was picked off by Slade Sibenaller at the WCHS 36 early in the second quarter. Tigers’ fullback Ryan Johnston had the payoff less than two minutes later with a 1-yard plunge across the goal line to even the game at 7. 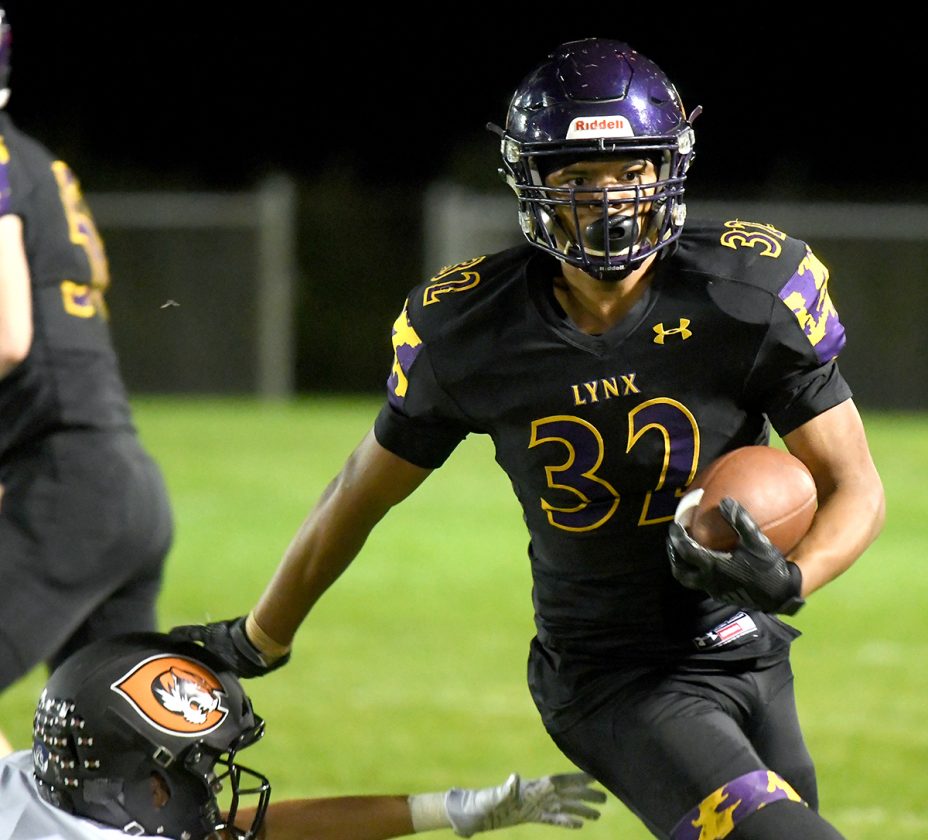 The first completion of the game for Carroll all-district quarterback Colby Vincent was a big one late in the first half, as he hit Tory Feldman on a slant across the middle for 39 yards that pushed the ball deep into Lynx territory. Vincent and Feldman hooked up again on a 10-yard pass near the sideline, and Johnston capped the 80-yard drive with another 2-yard TD to give the Tigers a 14-7 lead at intermission.

Still trailing by 7 as the fourth quarter began, WCHS received a jolt from Mathis when he took the opening play of the period up the middle and to the house on a 56-yard sprint. But a mistake on the extra point attempt left the Lynx trailing by a point.

Carroll made the failed PAT a moot point anyway.

Converting on three fourth-down plays, including fourth-and-7 at the WCHS 22, Carroll covered 71 yards and took 7:52 off the clock before Johnston found the end zone again from 2 yards out with 3:57 remaining.

Down 21-13, WCHS still had a chance as it took possession at its own 29. But a pair of running plays went nowhere and on third-and-12, Carroll defensive lineman Chase Gladden trucked Humphrey off the edge to set up fourth-and-long. 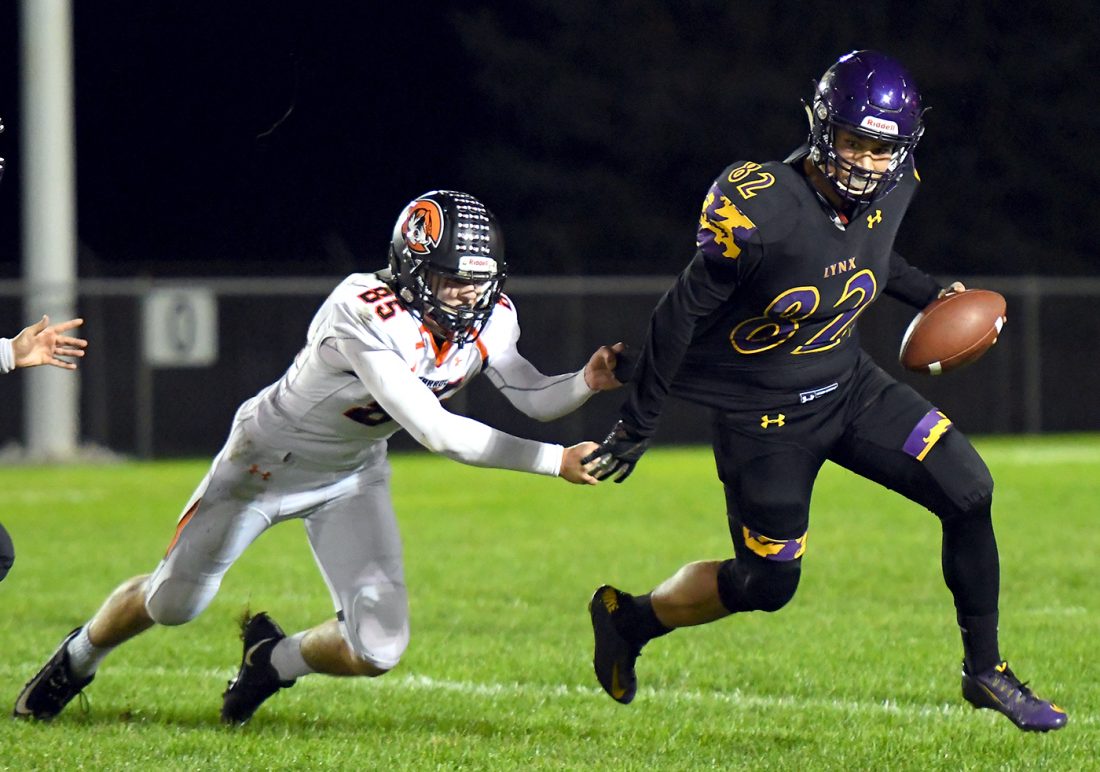 Webster City’s Malachi Montes (82) is grabbed from behind and tackled by Carroll’s Eliot Tidgren (85) for a 10-yard loss during the first half Friday night at Lynx Field. DFJ photo/Troy Banning

The Lynx opted to punt, hoping they could get a quick stop and one more possession. But that thought quickly evaporated when Gladden again came around the left end and blocked the punt attempt of J.J. Moore. Luke Woosley scooped it up off a hop and went 15 yards untouched to the end zone to give Carroll an insurance TD.

Gladden, a menace when the Tigers dropped WCHS 28-14 in 2018, again made his presence known, although Howard felt his team held its own.

“We did fine with (Gladden) … other than the blocked punt, he didn’t hurt us,” Howard said. “But they’re better. They’re bigger, faster, stronger and they’re seniors. That’s kind of the story.”

Carroll finished with 236 yards to 228 for WCHS. The Lynx were limited to 93 second-half yards and just 37 without the long TD jaunt by Mathis.

Mathis rambled for a game-high 135 yards on 25 carries, and his two TDs upped his season total to 15, the most in 3A. Whitmore finished with 65 yards on 11 totes, while Humphrey was limited to 10 rushing yards and 3 of 8 completions for 28 yards.

Olson’s third-quarter interception of Vincent was his seventh of the season, also the most in the class and No. 2 on the state leaderboard regardless of class.

Vincent completed 6 of 13 passes for 115 yards, while Johnston accrued 70 yards rushing on 20 attempts.

Back-to-back losses certainly isn’t what WCHS had in mind, but the players also know there’s a lot of season remaining, and that starts with a trip to winless Perry (0-5, 0-1) on Friday.

Jamin Stuhr added six tackles from an end position and Mathis had five, including the Lynx only sack of Vincent.

The ball sails through the air after Webster City punter J.J. Moore (99) had his punt blocked by Carroll’s Chase Gladden (55) late in the fourth quarter on Friday at Lynx Field. The Tigers scooped it up and ran it in for a touchdown to seal their 28-13 victory over the Lynx. DFJ photo/Troy Banning

Webster City’s Malachi Montes (82) is grabbed from behind and tackled by Carroll’s Eliot Tidgren (85) for a 10-yard loss during the first half Friday night at Lynx Field. DFJ photo/Troy Banning

WCHS cornerback Tyler Olson (80) races down the field following an interception, his seventh of the season, on Friday. DFJ photo/Troy Banning