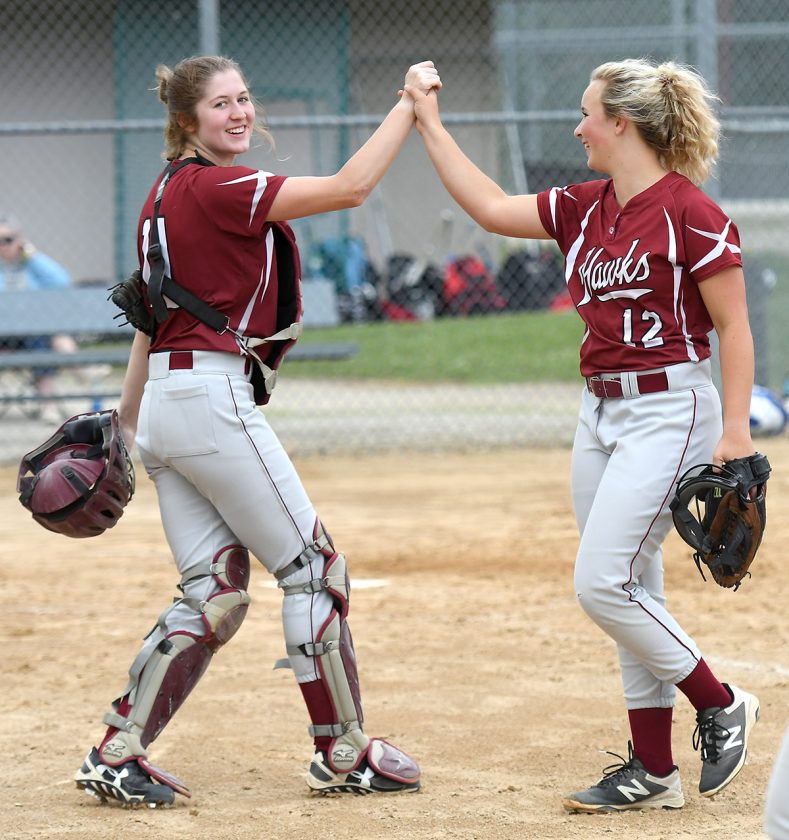 ROLAND — Working on a potential perfect game as she stood inside the pitcher’s circle in the middle of the fourth inning Friday afternoon, Taylor Volkmann laughed as she conversed with South Hamilton head coach Harry McMaken.

Were they talking strategy? Not really, rather “just dumb stuff,” Volkmann recounted. They were killing time, allowing the Hawks’ infield to warm up as they prepared to face Perry’s bats for the fourth time.

Why wasn’t Volkmann throwing warm-up pitches? That’s not her style, never has been. Were it not for the seemingly necessary throw down to second base, she wouldn’t even lob one toss to catcher Breanne Diersen.

Get it and go, that’s Volkmann’s philosophy. And it’s worked pretty dang well over her carer.

“I warm up before the game, but (during the game) I never really warm up,” she said. “I really don’t want to get more tired and throw more pitches than I have to.” 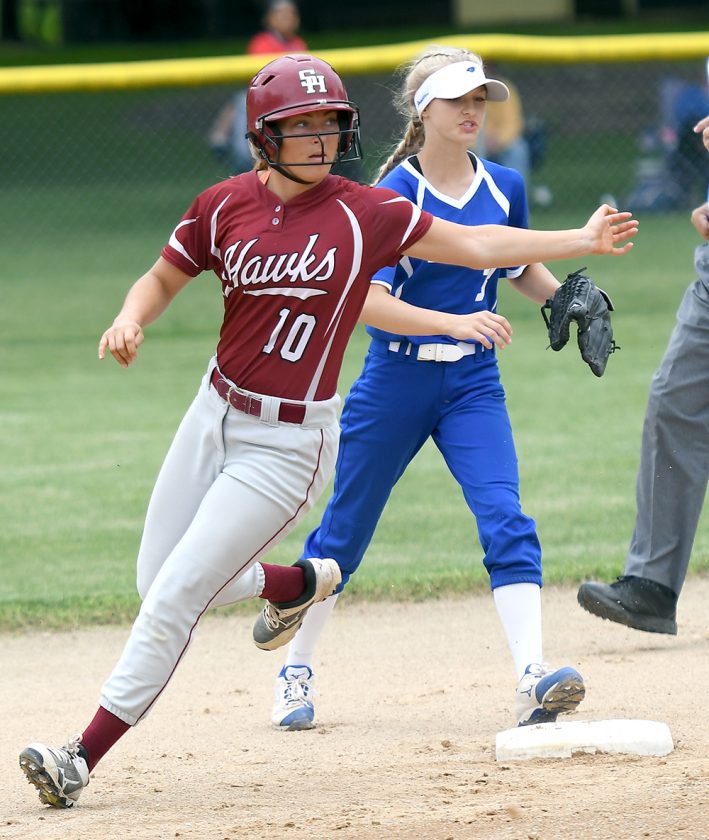 South Hamilton’s Leah Jacoby (10) looks back towards the plate as she rounds second base during Friday’s 8-0 win over Perry. DFJ photo/Troy Banning

And maybe, just maybe, there’s a psychological method to her madness.

“It sends a little message to the other team,” McMaken said. “It kind of says I don’t have to warm up and you still aren’t going to hit me.”

Perry received that message loud and clear at the Roland Kiwanis Tournament. The Blue Jays flailed away unsuccessfully at Volkmann’s array of screwballs and riseballs during South Hamilton’s 8-0 rout.

Volkmann threw 83 percent of her 80 pitches for strikes and fanned 14 of the 22 batters she faced. She also reeled in three weak pop-ups on the infield, leaving the other eight Hawks playing defense to pick at the scraps of the other four outs.

“She was really good, really efficient,” McMaken said of Volkmann. “It was just a really good pitching outing out there.” 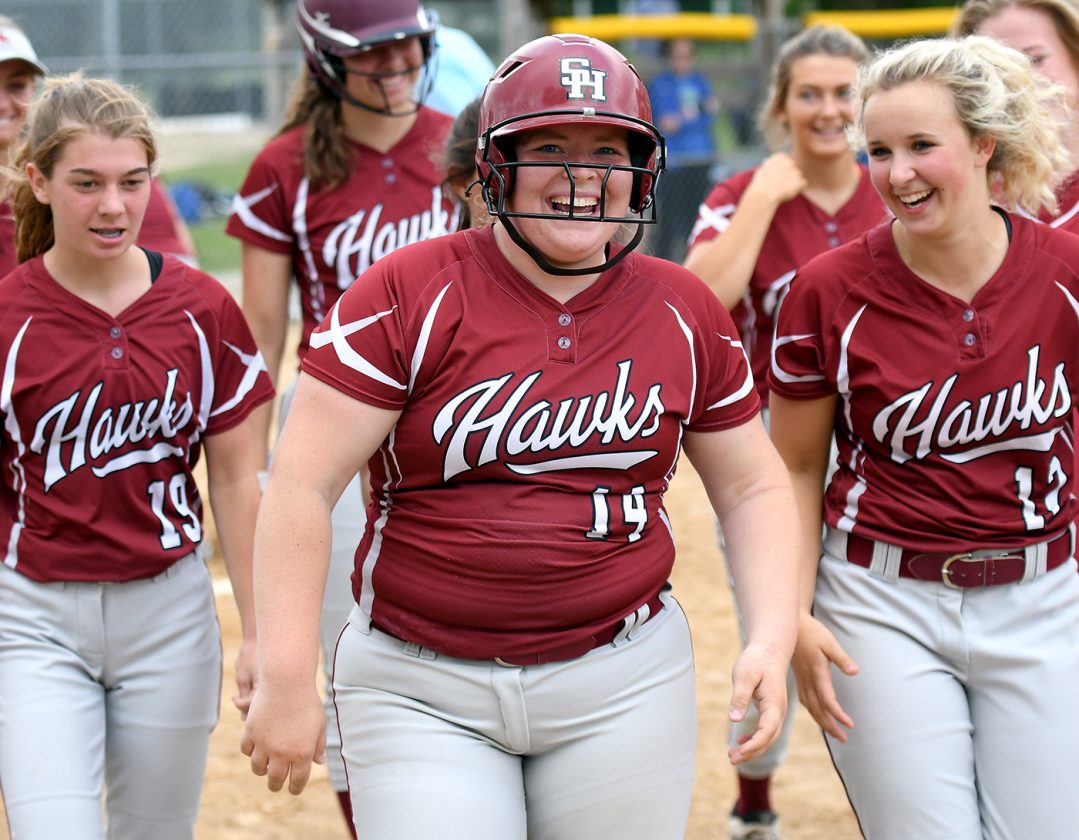 Cortney Harris smiles as she makes her way back to the dugout following her three-run home run in South Hamilton’s 8-0 victory over Perry at the Roland Kiwanis Tournament Friday afternoon. DFJ photo/Troy Banning

Only a Kennedy Tunink flare single to right field to lead-off the sixth inning stood in Volkmann’s way of a perfect game. It was a riseball that, well, didn’t really rise and Tunink punched it into shallow right in front of Hailey Diersen.

“I knew eventually they would probably catch on and hit one of the balls, but it is what it is,” Volkmann said.

During one stretch between the second and fifth innings, Volkmann retired 10 straight by herself — seven on strikeouts and three on fly balls.

Volkmann also did damage at the plate, where she went 4 for 4 with a double and two RBIs. Her bloop double in the third inning scored one and was part of a four-run flurry that put South Hamilton (11-4) in command.

“Once one of us hit we all kind of hit,” Volkmann said after the Hawks lashed 10 knocks. 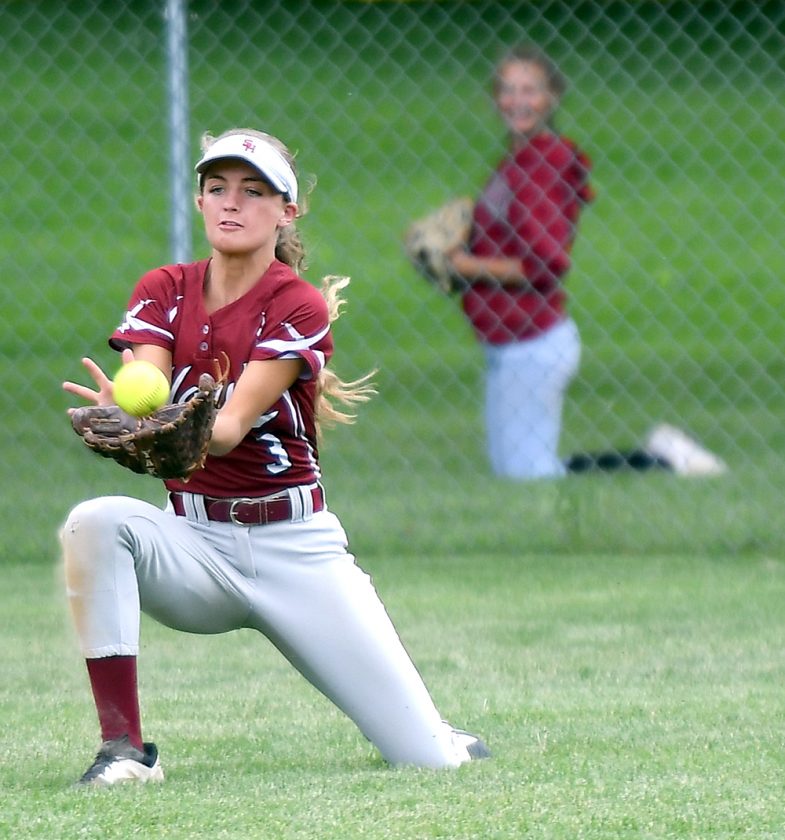 South Hamilton left fielder Emma Lewis makes a catch from her knees on a shallow pop fly to end the game against Perry on Friday. DFJ photo/Troy Banning

Cortney Harris delivered the exclamation point — a fifth-inning three-run blast to left-center off Perry relief pitcher Jayna Kenney. Harris jumped on a pitch over the meat of the plate and left no doubt on her fourth home run of the season.

“We were a little lethargic over the first couple of innings, but once we picked it up it just opened up the floodgates,” McMaken said.

Volkmann drove in her second run with a line-drive base hit to right in the sixth. She was thrown out at second attempting to stretch it into a double.

Breanne Diersen laced a single and drove in the game’s first run on a sacrifice fly to left field. Krista Swenson plated another run with a frozen rope single to left. Emma Lewis, Hailey Diersen and Lily Skartvedt all added singles. 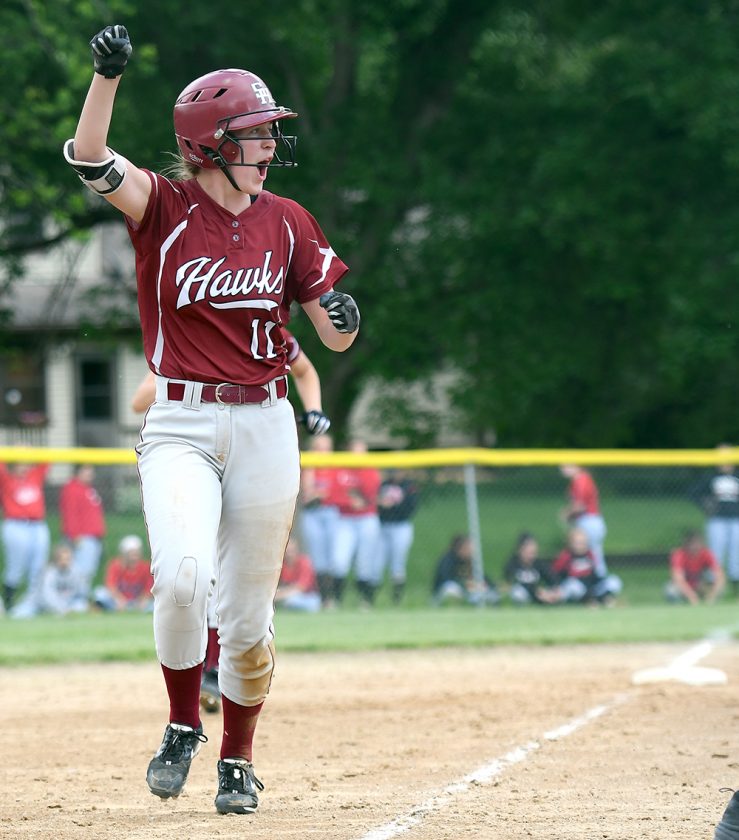 Volkmann struck out 12 and allowed just five hits in a losing effort.

Swenson went 2 for 3 at the plate. Volkmann and Skartvedt both singled and drove in a run.

Swenson belted a two-run home run in the first inning, part of a 15-hit attack for the Hawks (12-5). Breanne Diersen laced three hits and plated three runs. Harris roped two doubles and had two RBIs, while Swenson was 2 for 3 with three RBIs. Mackenzy Grady added two hits, including a double, and two RBIs.

Volkmann fanned seven in the circle.

Lewis went 2 for 4 with a RBI for South Hamilton (12-6). Harris and Leah Jacoby both singled.

Cortney Harris smiles as she makes her way back to the dugout following her three-run home run in South Hamilton’s 8-0 victory over Perry at the Roland Kiwanis Tournament Friday afternoon. DFJ photo/Troy Banning

South Hamilton’s Leah Jacoby (10) looks back towards the plate as she rounds second base during Friday’s 8-0 win over Perry. DFJ photo/Troy Banning

South Hamilton left fielder Emma Lewis makes a catch from her knees on a shallow pop fly to end the game against Perry on Friday. DFJ photo/Troy Banning