Ferrell notches six birdies and an eagle, shoots 3-under 69 to win Lynx Invite 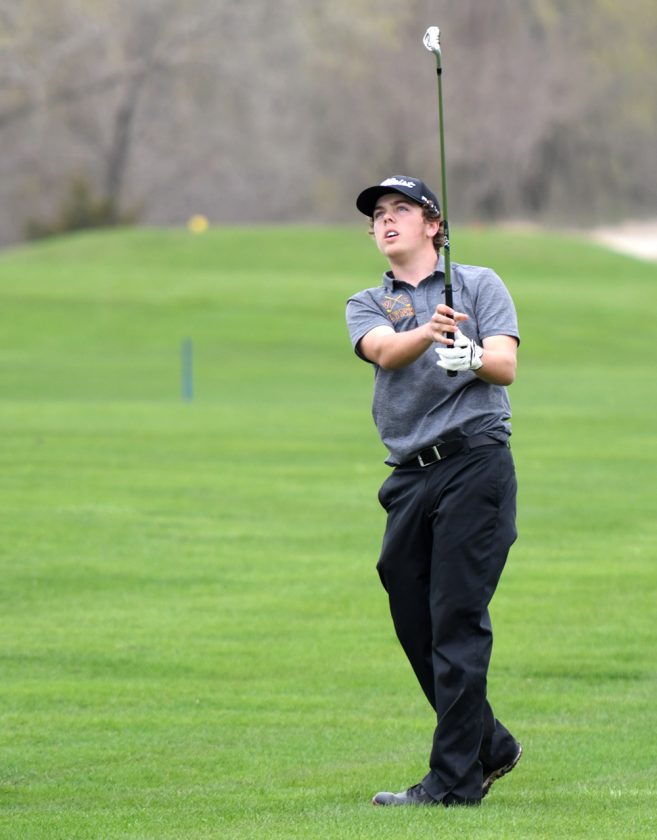 WEBSTER CITY — Nathan Ferrell now has proof that it’s possible to shoot in the 60s and still turn beet red with embarrassment during a round of golf.

The Webster City senior had it all going — long drives, crisp irons, a red-hot putter — on the hilly terrain at Briggs Woods Golf Course on Thursday, the end result being a 3-under-par 69 and five-shot victory at the Lynx Invite.

But there was one noticeable hiccup: A bogey at the short par-5 11th hole, arguably the easiest hole on the course. What happened?

“I stood on the tee and hit about the worst shot I’ve hit in three years,” he said. “I topped my drive and it didn’t even make it halfway across the pond. Truthfully, it was pretty embarrassing because my family was there watching. But that’s what golf is, it’s eliminating the bad shots and have as many good shots as possible.”

Ferrell certainly did that.

His round included six birdies and an eagle at the par-5 12th hole, not exactly a bad way to make up for the blunder one hole earlier. He started his round with back-to-back birdies at Nos. 1 and 2 and ended it with another birdie at the 18th. His card was littered with 3s, 10 of them in all.

Birdies at Nos. 4 and 6, followed by back-to-back pars took him to the ninth at 5-under. But a slice drive got him in trouble, the result a double-bogey 6 that forced him to make the turn at 3-under.

“I was frustrated, but I knew what holes I had coming up,” Ferrell said. “I knew I could make some birdies.”

Finishing with a birdie at 18 for a sub-70 round allowed Ferrell to forget about the select few mistakes earlier in the round.

“I wanted to birdie (18) so bad,” he said. “For a lot of the back 9 I was a little tentative looking at the hazards instead of the hole, but on 18 I looked at the hole and went for it.”

Ferrell’s blitz of the course helped to propel WCHS into second in the team standings with a 323, trailing only tournament champion Nevada (312). Clear Lake (331) was third.

Drake Doering fired an 80 for the Lynx, while Trey Lyons and Chase Rattenborg turned in matching 87s.

Doering and Ferrell both shot 77 to lead WCHS. On the card-back, Doering placed seventh and Ferrell was 10th.