Webster City residents Ted and Linda Williams sit together at Sports World, the local business owned and operated by the family. They’ll host their friend and Pro Football Hall of Fame member Carl Eller, depicted in the statue in the background, for a signing on Saturday. DFJ photo/Troy Banning

Carl Eller, a 2004 inductee into the Pro Football Hall of Fame and a founding member of the famed Purple People Eaters for the Minnesota Vikings, will be in Webster City to meet fans and sign autographs on Saturday.

He’ll set up shop at Sports World, locally owned and operated by Ted and Linda Williams, from 10 a.m. to 12:30 p.m. He’ll sign anything and everything — cards, hats, shirts, posters, you name it — with no charge to the public. Pictures, the more the merrier, are welcome as well.

“I’m excited about coming down and getting to see (Sports World) and meeting some of the Vikings’ fans,” Eller, a six-time Pro Bowl selection who played in the NFL from 1964-79, said. “I think it will be a fun time and I’m really looking forward to it.”

What brings Eller to central Iowa, some three hours south of his home in Minneapolis? In a word: Friendship. It’s a relatively new relationship, one that was born during a somber chapter of life, but through mutual pain and tragedy came respect and affection.

Left to right, Molly Eller, Carl Eller, Linda Williams and Ted Williams pose together for a photo at the Gift of Life Transplant House fundraiser in Rochester, Minnesota, this past July. The couples became friends when they stayed at the house during the spring of 2017. Carl Eller was a 2004 inductee into the Pro Football Hall of Fame. He played in the NFL from 1964-79 and competed in four Super Bowls for the Minnesota Vikings. Submitted photo

It was an early morning in late spring, 2017, and Ted and Linda Williams were in their own little world as they sat and ate their breakfast at the Gift of Life Transplant House in Rochester, Minnesota.

Being in that house was both a blessing and a curse.

A Type I diabetic since the age of 9, Linda was on the transplant list for a combined kidney and pancreas transplant at the Mayo Clinic, which was scary enough. But for 18 months, from early 2016 to the fall of 2017, she spent six days a week in Rochester for treatment to combat calciphylaxis, a rare and deadly disease associated with kidney failure.

It was torturous and the prognosis was not good. Calciphylaxis can cause blood clots, painful skin ulcers and infections, and more than 50 percent of those diagnosed are dead within one year.

Just a few months earlier, in late February of 2017, Linda was dealt another blow, one she was still coming to grasp with emotionally as she huddled around her breakfast that morning.

Home from Rochester for a few days of rest and what was supposed to be relaxation, she developed a tiny red sore on the little toe of her right foot, a minor injury Ted and Linda think occurred when she wore a pair of boots that pinched her toe. But because of her poor circulation from the diabetes, that sore turned into an infection, one that seeped into the bone.

The toe eventually turned black and the infection spread. Shortly after, Linda had to have her right leg amputated just below the knee.

“That was obviously devastating,” Ted said in a hushed tone. “But, by God, she recovered from that too.”

Despite the unrelenting afflictions, being at the Gift of Life really was a blessing. It was a home of respite; the physical tolls on Linda and the Williams family were enough, but at least they had a place where they could stay that wouldn’t financially bankrupt the couple.

“It’s a place for transplant recipients and the whole idea of living there is so people don’t have to pay for hotels and things like that, just like the Ronald McDonald House,” Ted said. “It really is a great place.”

Individuals staying at the Gift of Life are offered free room and board, but they must fix their own meals and they’re encouraged to spend time outside of their living quarters and mingle with the other occupants.

And so, on that morning in the spring of 2017, that’s what Ted and Linda did. As they sat together another couple asked if they could join them for breakfast, and being your average hospitable Iowans, the Williams said of course.

That couple: Molly and Carl Eller. Yes, the Carl Eller, although Linda didn’t know him from Adam.

“To me he was just Carl,” Linda said. “I had no idea who Carl Eller was or that he was a famous football player.”

Ted, an avid sports fan all his life, couldn’t quite place him either during that first interaction.

“I had these suspicions that I know this guy from someplace because he looked familiar,” Ted said. “But they just said ‘we’re Carl and Molly,’ they didn’t use last names.”

Carl was dealing with his own health crisis at the time. The rough and tumble defensive end who played in four Super Bowls and still holds the Vikings’ sacks record, had received the news that he had multiple myeloma, a blood cancer related to lymphoma and leukemia. He was staying at the Gift of Life while he awaited a bone marrow transplant in an attempt to save his life.

And as the four sat together, they shared their stories. The pain. The fright. The futures they didn’t know if they were ever going to get to live. The friendship continued to blossom throughout their stays.

Even after Ted learned that, yes, he was bonding with that Carl Eller, the conversations rarely drifted to football. And in Carl’s eyes, he was learning about a couple that was just as determined and ferocious as anyone he encountered on the gridiron.

“I have such great respect for Ted and Linda,” Carl said. “She’s such a courageous woman with what she’s been going through. And, you know, having a profile of this rough, tough Purple People Eaters guy, my image and my perception of things like manhood were kind of a format that I used as a model. But Ted presented himself as such a terrific role model and such an image of manhood, and that was something I hadn’t seen or experienced. It kind of gave me a new definition of what manhood is really about. They’re a remarkable example of the human spirit.”

Carl’s bone marrow transplant was a success and his health steadily improved. Eventually, his time at the Gift of Life came to an end, but not before he and Molly — newlyweds at the time — promised they would see Ted and Linda again when they held a wedding reception for friends and families in the Twin Cities.

Linda, who was still without a permanent prosthetic at the time, vowed to them: “I’m going to walk into that reception.”

And several months later, walk she did.

The reception was nothing short of eye candy for Ted, as he rubbed shoulders with the likes of Vikings’ Hall of Fame head coach Bud Grant and legendary players Jim Marshall and Alan Page.

But when Molly and Carl stood to address their guests, it was their words that meant the most to Ted and Linda.

“Both of them spoke and thanked their friends and family and all of this,” Ted recalled. “But then they said we want to give a special shoutout to Ted and Linda Williams for coming all this way, and I was like, what, they’ve got all of these people here and they want to single us out? That was special.”

Linda’s health gradually improved too. To the surprise of her doctors, she survived her first bout with calciphylaxis, although it’s a disease with no cure. Yes, it could come back and it’s a part of their lives as Linda continues to undergo dialysis three times per week while she patiently waits for a transplant.

“It’s in the back of our minds that it could come back, but she is doing remarkably well,” Ted said.

And Carl and Molly were two of the people to congratulate her soon after.

“They were excited when the election was held and they wanted to know the results,” Ted said. “It’s all worked out really well.”

The months passed, and Ted and Carl continued to communicate through calls and texts. The couples met up again this past July when the Gift of Life held its annual fundraiser and golf tournament where Carl and Molly were the guest speakers. There were various items up for auction, much of it Carl Eller memorabilia, and there was one item — the grand finale piece — that piqued Ted’s interest.

“It was a huge statue of Carl in his uniform and the artist had painted it,” Ted said. “When they brought it out, Linda looked at me and I looked at her and we said, yep, we’ve got to have that. We hadn’t bid on anything and I knew that if I got that, it was going down here (at Sports World).”

Determination is a hallmark of the Williams family. That statue, complete with a Carl Eller autograph near the left shoulder, now resides in the west front window at Sports World on Main Street in Webster City.

Ted was thrilled to take ownership. Carl was as well.

“He just said, ‘Ted, that was awfully nice of you to do that. You didn’t have to,'” Ted recalled. “We’d been trying to figure out a time to get together and he said ‘what if Molly and I just come down to Webster City some Saturday and I’ll sign autographs and people can take pictures?’ So a few weeks ago he called me and we set it up for Oct. 20.”

Similarly to Linda, Carl continues to live with his cancer, which has no cure. Both survivors stepped into the pit of hell and somehow walked out the other side with a love of life. And each other.

“It’s quite a deal to go through and my view (at the time of the diagnosis) was cancer is like a death sentence,” Carl said. “But, right now, my health is good and the treatment has gone well. It still is an undertaking and something I’m getting used it. You need a lot of support because it’s a different way of living.”

Saturday — as Carl meets and greets fans while Molly, Ted and Linda stand close by — will be all about living. There will be smiles and laughter, and stories of better times than what they endured on that first meeting.

Webster City residents Ted and Linda Williams sit together at Sports World, the local business owned and operated by the family. They’ll host their friend and Pro Football Hall of Fame member Carl Eller, depicted in the statue in the background, for a signing on Saturday. DFJ photo/Troy Banning

Left to right, Molly Eller, Carl Eller, Linda Williams and Ted Williams pose together for a photo at the Gift of Life Transplant House fundraiser in Rochester, Minnesota, this past July. The couples became friends when they stayed at the house during the spring of 2017. Carl Eller was a 2004 inductee into the Pro Football Hall of Fame. He played in the NFL from 1964-79 and competed in four Super Bowls for the Minnesota Vikings. Submitted photo 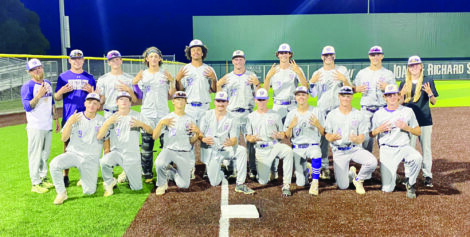