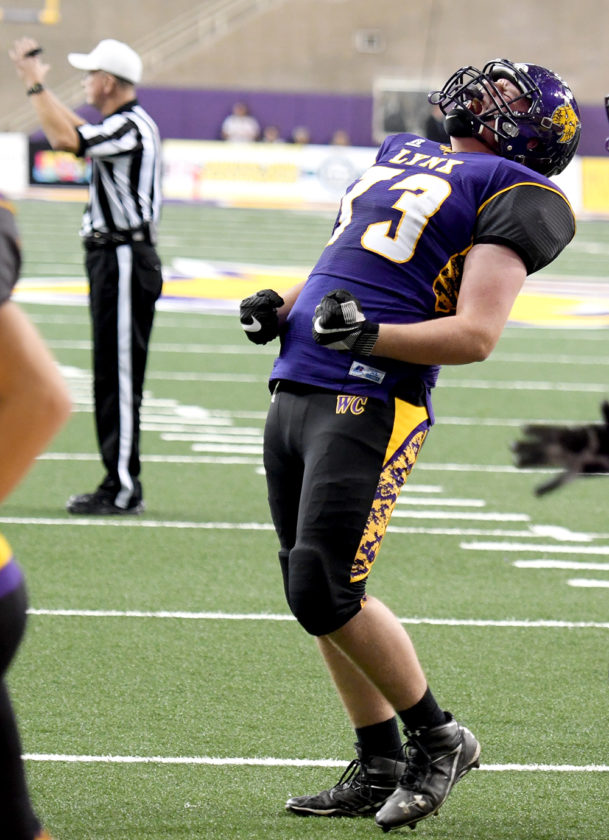 Webster City senior offensive tackle Nathan Reed lets out a scream following the Lynx only touchdown in a 6-3 victory over Glenwood in a Class 3A semifinal contest on Thursday inside the UNI-Dome in Cedar Falls. No. 6 WCHS will face No. 1 Pella for the state title on Thursday at 7:06 p.m. DFJ photo/Troy Banning

All of the television cameras and print reporters had exited the interview room and so had most of the players when I got the chance to sit down in a school desk and have my regular postgame chat with Webster City head coach Bob Howard late Thursday night.

The 40-year veteran of the prep scene who owns three state championships had just watched his team — one that was unranked in August and had to play its final six games of the regular season like they were all playoff contests just to assure itself of a postseason berth — lock up a berth in the Class 3A state championship bout.

The weariness that usually takes over Howard’s body in the moments after the final horn was nowhere to be found. His players were happy, no doubt, to take the program to the state finals for the first time ever. But the coach was even happier.

Webster City 6, Glenwood 3. Load up the bus again, folks. We’re all headed back to the UNI-Dome.

“It’s been so much fun to be with this team and now, win or lose, we get to go the maximum number of days we can go with them and that’s neat,” Howard said after collecting the 322nd victory of his career. “I’ve had some teams that have been awfully mentally tough and this may be the best one yet. This group is a helluva football team.”

Next up: Mount Everest. The sixth-ranked Lynx (11-1) will be the decided underdog when they step onto the turf to face two-time defending state champion and top-ranked Pella (12-0) on Thursday at 7:06 p.m. The Dutch won their state-leading 40th consecutive game on a miraculous touchdown pass on the final play to upend No. 2-ranked Cedar Rapids Xavier, 34-30, in the other semifinal at about the time you were all getting home Thursday night.

Pella is big. Pella is talented. And Pella knows how to win. But I’ll have plenty to say about the Dutch later this week. For now, let’s get back to the Lynx defensive dominance against Glenwood.

The beauty of the game being televised was that I was able to record it and go back and watch it again this weekend. I took six pages of notes and would love nothing more than to relay every key moment in the victory, but since I doubt you want to spend 45 minutes reading, I’ll make it as brief as possible.

Watching it live or on playback, the performance of the WCHS defense was equally impressive. Consider this: On the second play of the game, Rams’ tailback Cole Loeffelbein raced through a hole the size of the Grand Canyon and galloped 50 yards deep into Lynx territory. Why didn’t he score? Because the two Zanes — Carter and Williams — chased him down and tackled him from behind. It led to a field goal and was the last time Glenwood sniffed a scoring opportunity.

During the Rams’ final eight drives of the game, they reached the Lynx side of the field just twice and never moved the ball inside the 40 yard line. They finished with just 163 yards of offense.

“We just don’t lay down,” WCHS senior spinback and linebacker and punter and kicker (he’s got a lot of jobs) Drew Fielder said. “Cooper (Lawson) does a good job of telling us to bend, but don’t break, and we never broke. We just stayed tough and made the plays when we needed it.”

Williams’ play all night leapt off the TV screen, as did the quickness of defensive end Riley Mishler and the unrelenting power of nose tackle James Cherry. Williams and Fielder essentially put an end to Glenwood’s thoughts of running the option early in the game. Williams came up and played the run well and also executed flawlessly when the Rams attempted to pass.

One of the biggest plays Williams made came on third-and-10 on Glenwood’s final possession of the game. Quarterback Andrew Blum rolled out to his left and uncorked a pass deep down the field just before he was trucked by Lawson. Loeffelbein appeared to have position at the Lynx 40, but just as the ball got there so did Williams. He batted the ball down to prevent a potentially big play.

“He made those plays against Norwalk and he made them against Boone, and it was a big one when he batted that one down,” Howard said. “Zane’s never played defensive back until this year, he’s a linebacker. But he’s turned into a very good defensive back.”

The game probably never should have been that tight late though. Offensively, WCHS let numerous opportunities go by the wayside. The Lynx had drives stall at the Rams’ 21, 20, 5, 38, 4 and 38. Yeah, not great, but, in the end, it didn’t come back to bite them in the behind.

“If we could have scored on one of those, the game’s over,” Howard said. “I don’t think I did a very good job of calling plays.”

WCHS scored the only points it would need late in the first half on a six-play, 31-yard drive that, not coincidentally, featured some of the game’s best blocking. Senior guard Ashton High came through huge on the final two plays with trap blocks to spring Fielder, first for 10 yards and then for the final 6 to the end zone.

As it turned out, game over.

Lynx fullback Hunter Hayes also has to share in the blocking limelight. He’s not big and oftentimes he goes unnoticed next to the big boys like Lawson, Nathan Reed and Zac Lucero, but his efforts were apparent when I was able to rewind plays over and over again.

Payton Kannuan didn’t score the touchdown, but the senior wingback softened the Rams’ defense up with a handful of nice runs to the outside in the first half. The Rams were determined to not let tailback Robert Frederiksen beat them and they succeeded. But that left them susceptible to Kannuan’s speed and he made them pay. Howard says he’s just one example of what makes this team so unique.

“I don’t remember a 3A championship game with one of the prime players being 5-foot-5 and 140 (pounds),” Howard said. “Payton is just one example and Robert is the ultimate example of what he did.

“I want all of my senior classes to have no regrets and all of my great teams, that’s where they were at. There was nothing else that they could have done and that’s the way it is with this team. I’m just really excited and really happy for these kids because they deserve it.”