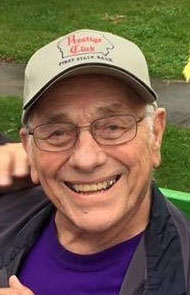 Erwin Dean “Duffy” Christianson of Webster City, Iowa, died at Mercy Hospital in Des Moines of congestive heart failure on September 12, 2019. At 85 years young, Duffy went to be with the Lord he loved. The funeral will be held at 2:00 p.m., Saturday, September 28th, 2019, at Asbury United Methodist Church in Webster City. The visitation will be held in the church prior to the funeral, from 11:30 – 1:30 p.m.. The family has chosen Boman Funeral Home (www.bomanfh.com) to care for their needs. In lieu of a memorial, contributions may be made to Asbury United Methodist Church or Kendall Young Library

The youngest child of Evan and Theline (Anderson) Christianson, Erwin was born in Lake Mills, Iowa on March 16, 1934. Erwin attended Lake Mills High School, graduating with 58 others in the class of 1952. He attended Iowa State Teachers College and graduated with a degree in Music Education/Vocal Performance in 1956 and then received a master’s degree in Choral Direction from the University of Northern Iowa in 1963. Erwin was united in marriage to Linda Neuhart on December 3, 1955, in Charles City, Iowa.

In 1956, “Mr. C.” began teaching High School choral music in Webster City. He would serve in this role, directing countless musicals, choir performances, and special concerts over the course of 33 years. He also taught music at Iowa Central Community College, the elementary schools, and led the songs for the Main Street Kiwanis Club, for which he was a charter member of 45 years. Duffy was the Choir Director at Asbury United Methodist Church for 27 years, from 1972 – 1999. He enjoyed serving as a lay leader/liturgist at Asbury and was the coffee guru for the Man-to-Man worship group. He called WC football games and sang the national anthem from up in the rickety old press box. Duffy sang for countless weddings and funerals in Webster City for more than 50 years. And for nearly a decade, he sang with the First United Methodist Church in Gilbert, Arizona during the winter months.