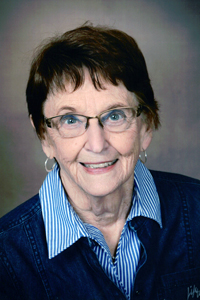 Pat Noller, 86, of Webster City, died Sunday, August 25, 2019, at the Mercy Medical Center in Des Moines. A Celebration of Life will be held 10:30 a.m. Thursday, August 29, 2019, at Asbury United Church in Webster City, with Rev. Jeff Flagg officiating. Burial will be at Graceland Cemetery immediately following the service. Visitation will be Wednesday from 5:00 p.m. to 7:00 p.m. at Foster Funeral & Cremation Center.

Patty Lou Williams, daughter of Kenzie and Inez Hardin Williams, was born October 23, 1932, at St. Joseph Hospital in Ottumwa. She graduated from the Sigourney High School in 1951 and later attended Webster City Junior College. On July 1, 1951, she married Willis Eugene Noller at the United Methodist Church at Sigourney. The couple resided in Sigourney, Iowa. In August of 1952, they moved to Webster City. She was a homemaker and assisted part-time at Foster Funeral Home. Gene died April 14, 2012.

In addition to her husband, she was preceded in death by her parents; son-in-law, Joe Kesler; brother, Kenzie Williams, Jr. and nephew, Patrick Williams.

Pat cherished her many summers at Clear Lake, Iowa, and her winter home in Mesa, Arizona. Pat’s biggest passion was traveling which she passed on to her daughters.