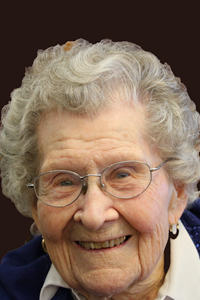 Gladyce Carlson, 103, of Webster City, died Friday, January 4, 2019 at Southfield Wellness Community. Funeral services will be held on Friday, January 11, 2019 at 11:00 a.m. at Asbury United Methodist Church with Pastor Jeff Flagg, officiating. Burial will be held at Lawn Cemetery near Boxholm. Visitation will be one hour prior to the service at the church.

Gladyce Therese Nordstrom, daughter of Oscar and Selma Chingren Nordstrom, was born February 23, 1915 at Grant Township in Boone County. She graduated from Boxholm Consolidated schools. She married Ward Carlson on October 12, 1940 in Des Moines. Gladyce was a homemaker and later worked at Spurgeons.

In addition to her parents, she was preceded in death by her husband; grandson, Kevin Cruze; brothers, Bernnard and Warren Nordstrom; sister, Ruth Wood.

In lieu of flowers, memorials may be directed to Asbury United Methodist Church.