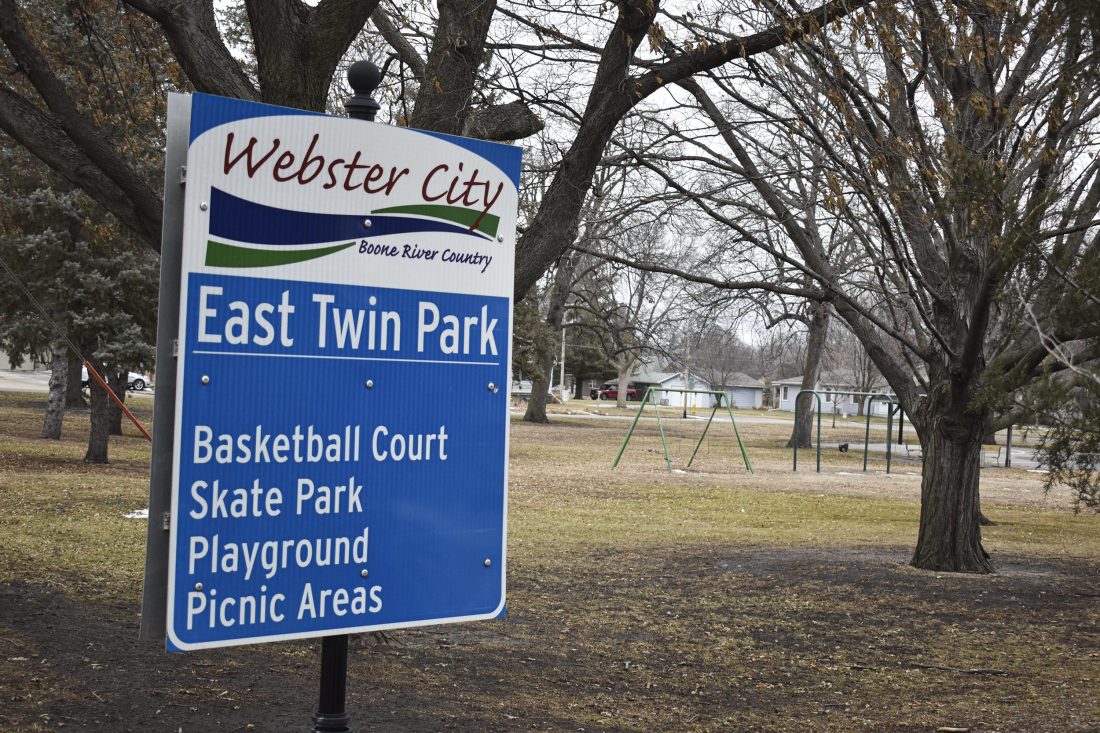 — Daily Freeman-Journal file photo East Twin Park will soon see some new accessible playground and fitness equipment, thanks to a large grant from the Wellmark Foundation. But officials say donations are needed to help meet the matching fund criteria.

With all of the COVID-19 news, some may have forgotten about the efforts to save and revitalize East Twin Park. But behind the scenes, people have been working to make the updates a reality.

Back in May, a large grant was received that will provide the city an opportunity to revitalize East Twin Park, which will include the installation of new ADA accessible recreation equipment. The grant from the Wellmark Foundation was awarded in the amount of $96,928.

“It just seemed like the perfect opportunity to apply for that grant for East Twin Park because of the attention that the park received when it was almost sold and because of the donations that were received,” said Webster City Vitality Director Lindsay Henderson. “When you apply for a grant, you have to be able to show that the community really cares.

“And I think we showed that.”

The community came out in strong support for revitalizing the historic park. Crowds packed the City Council chambers back in January to urge the council not sell the park. The site had been considered as a new location for the Dollar General Store. But the council listened to the community members and voted unanimously to turn down the proposed purchase agreement.

Shortly after that council meeting, a Facebook group was organized to give park supporters a place to share ideas and donations started to roll in from current and former Webster City residents.

Henderson explained that the grant will allow the city to replace playground equipment with something that would be accessible to all. In the Parks and Recreation Master Plan, East Twin Park had already been identified as what Henderson calls “the active park.”

“You’ve got skate park and the basketball court and so it made sense have the playground equipment and we’re also going to have some outdoor fitness equipment,” she said. “The Wellmark grant will help pay for that part of the park improvement.”

The playground and fitness equipment are just one phase of the updates and improvements envisioned for East Twin Park. The project will also involve adding some walkways to get to and from the new equipment.

“We don’t want to have accessible equipment that you can’t get to,” she said. Also planned are some diagonal handicapped parking spaces.

Some of that site preparation work will be done as in-kind work by city crews.

Down the road, Henderson said future improvements could update the shelter, possibly adding restrooms, and a parking lot could also be part of the plans. But those pieces are not part of the Wellmark grant.

“This is just about the playground and fitness equipment,” she said.

One of the caveats of the grant is that the city must come up with matching funds. About 50 percent of the matching funds can be in the form of in-kind donations.

“With our estimates so far, we’ve got about 35 percent in-kind. So we’ll need to raise more in cash,” she said.

At last week’s meeting, the council agreed to sign the Wellmark grant agreement to meet the match. Henderson said she hopes to see some strong community support for the project.

“I want people to remember that when all of this got started, someone set up a fund with the Enhance Hamilton County Foundation for Friends of Webster City Parks and Recreation. Funds can be earmarked for any park,” she said. Every dollar helps.

Those who would like to make a donation can contact Darcy Swon, Enhance Hamilton County Foundation Development Director, at 515-835-0437, or at dswon@enhancehamiltoncounty.org.

One noticeable improvement at the park already has been the removal of the skate park chain-link fence.

“That just opens everything up,” she said.

Another idea discussed with the parks and recreation commission was the painting of the sidewalls at the skate park.

Henderson said there is paint available and she hopes to get the job done in the next few weeks. And, she’s looking for a couple volunteers to help with the project.

“I’d really like to see some youth – like between ages 12 to 18 — come out and help. We probably need two or three at a time. They can reach out to me at city hall if they are interested.

Of course, any one who volunteers would have to sign a city waiver, be willing to wear gloves and a face mask and to abide by social distancing guidelines.

“We’ll liven it up,” she said of the skate park project. “It will be super colorful.”