Win-win:?WCHS?senior and all-time wins leader to compete at Division I?level and receive an education from one of country’s leading academic institutions 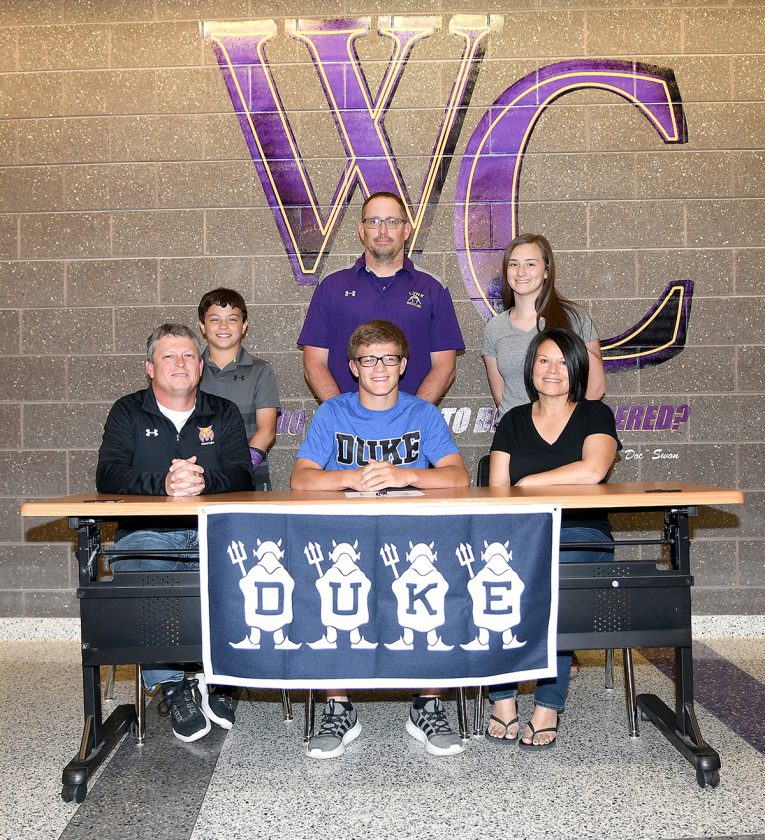 Webster City senior Drake Doolittle (front, center) announced yesterday that he has committed to wrestle at Duke University in Durham, N.C. By his side for the announcement were his parents, (front) Tod and Judy Doolittle, (back) brother Carson Doolittle, WCHS head wrestling coach Chad Hisler, and sister Hannah Doolittle. DFJ photo/Troy Banning

Webster City senior Drake Doolittle (front, center) announced yesterday that he has committed to wrestle at Duke University in Durham, N.C. By his side for the announcement were his parents, (front) Tod and Judy Doolittle, (back) brother Carson Doolittle, WCHS head wrestling coach Chad Hisler, and sister Hannah Doolittle. DFJ photo/Troy Banning

WEBSTER CITY — Wrestling and academics, Drake Doolittle has always excelled at both. So it’s fitting that he’s headed to a nationally known college where he’ll get the chance to showcase his talents in both arenas.

Yes, that Duke — the home of the Cameron Crazies that owns one of the top academic reputations in the country. And he couldn’t stop smiling as he talked about his decision.

“This is what every wrestler dreams of when you’re a little kid,” Doolittle said. “To be in this position where I’m able to wrestle at the (Division I) level, that’s the pinnacle of the sport almost. And when wrestling is over, I’ll still have that education from Duke that will last the rest of my life.” 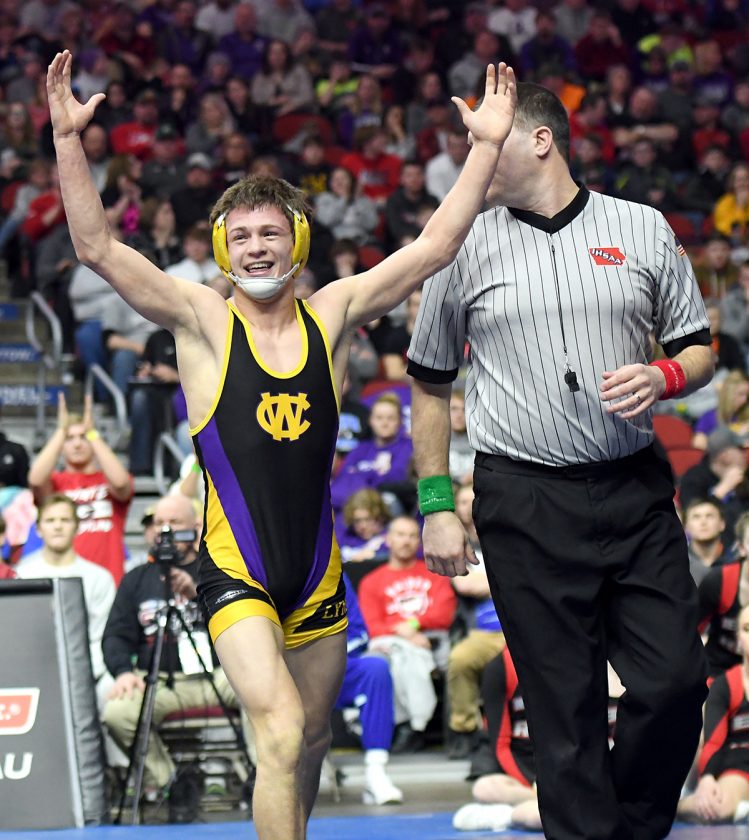 Doolittle capped one of the top careers in the history of Webster City wrestling with a Class 2A 120-pound state championship in February. He became the fifth Lynx wrestler to attain state gold and the first to do so after reaching the state finals and coming up short. He was the state runner-up at 113 as a sophomore in 2017.

Just one of two WCHS wrestlers to win four state medals — he placed third at 113 as a freshman and fifth at 120 as a junior — Doolittle exited the program with nearly every individual record. He set all-time marks for wins (175), pins (114), takedowns (553) and team points (1,190). He’s also the only Lynx grappler to win four North Central Conference titles.

WCHS head coach Chad Hisler sees past the records and achievements though.

“When you start coaching and you envision the type of kid you’d want to coach, it’s Drake,” Hisler said. “He’s a good human being, not just a good wrestler and student.”

Truth be told, Doolittle thought February’s state title was the final chapter in his wrestling career. He was ready to head to Iowa State and be a student. Until Duke came calling. 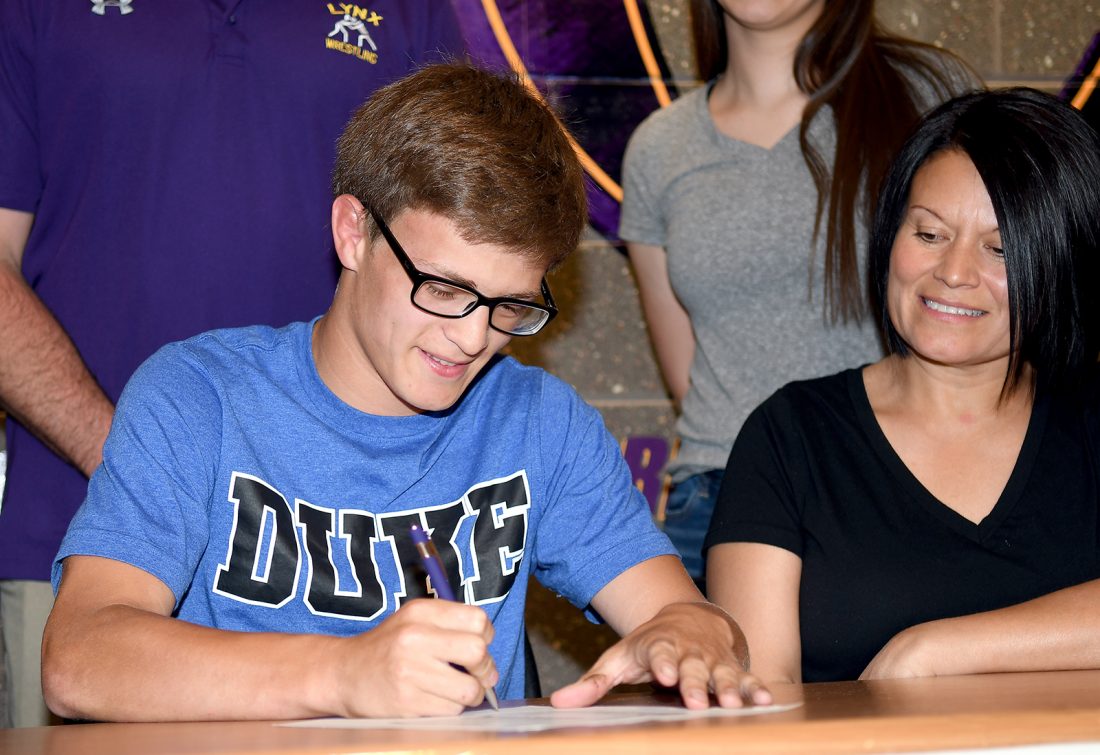 “They followed me through the state tournament and then we started talking from there,” Doolittle said.

Doolittle finally got the chance to visit the campus recently and it was love at first sight. It didn’t take him long to make his decision once he returned home.

“It was awesome there,” he said. “It’s a nice campus and then I got to work out with (the wrestling team members) and that was eye-opening. It just felt right and that’s what led me to make my decision.”

Doolittle projects as a 125-pounder at the collegiate level. The Blue Devils, led by head coach Glen Lanham for the past seven seasons, finished fifth at the ACC tournament and 24th at the NCAA championships earlier this year.

After losing just 16 times as a prep, Doolittle knows he’s going to start at the bottom once he reaches Duke. He’s looking forward to the challenge.

“Being at the bottom in high school, I was never really there,” he said. “It will be good for me to learn from it and grow.”

Always humble, always polite and always team-first, Hisler says Duke is getting the best Webster City has to offer in Doolittle.

“It wouldn’t surprise me one bit to see Drake wrestling at the NCAA championships one day,” Hisler said. “He gets the chance to go to an unbelievable academic university and he gets to wrestle. It’s great for all of the other kids in Webster City to see what hard work can do.”