Lynx prepare for Class 4A regional semifinal, wait for opponent

Ballard and Boone meet tonight for right to take on WCHS?on Saturday 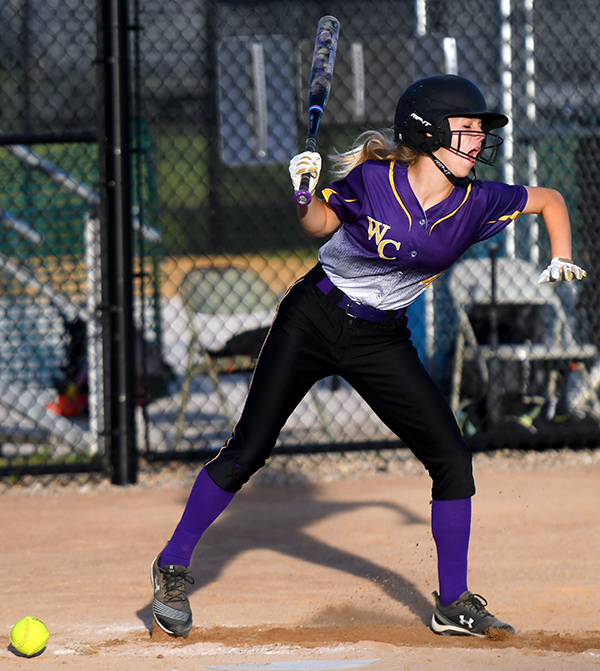 Webster City’s Addie Tesdahl reacts after being hit by a pitch against CGD in Clarion earlier this season. Lynx head coach Jess Howard says the eighth grader will miss Saturday’s Class 4A regional semifinal due to an ankle injury. DFJ photo/Troy Banning

WEBSTER CITY — The regular season didn’t end exactly like the Webster City softball team envisioned. The remedy for that disappointment? A strong run in the postseason.

And that begins this weekend.

Looking to rebound from back-to-back losses, the Lynx (7-6) will host a Class 4A Region 2 semifinal against either 13th-ranked Ballard (8-7) or Boone (12-8) on Saturday at 7 p.m. The winner will advance to Tuesday’s regional final at a site to be determined where, most likely, eighth-ranked Dallas Center-Grimes (17-9) will be waiting.

Ballard and Boone, rivals in the Raccoon River Conference, will meet this evening in a regional quarterfinal. Ballard knocked off Boone during the regular season, 5-1, but the Toreadors are 8-1 in their last nine games.

WCHS head coach Jess Howard will be in Huxley this evening to scout both teams, but she says it really doesn’t matter who the Lynx play. She knows they’ll have their hands full with either opponent.

“They’ve both got girls one through nine that can do damage,” Howard said. “They know how to play good softball and they go up against good teams in the conference they’re in. It’s going to be a good game for us to be able to have that competition.”

Ballard and Boone both have plenty of power, as they’ve combined to belt 27 home runs in this shortened season. And both have a player that can alter the course of a game with one swing. Ballard is led by Skylar Ribgy, who hits .568 with seven home runs and 27 RBIs, while Boone is paced by Emma Dighton, who rakes at a .500 clip with nine dingers and 37 RBIs.

But the Lynx will head into the postseason without one of their leading sticks. Eighth grader Addie Tesdahl, who missed the final two games of the regular season with an ankle injury, will be sidelined in the postseason as well. Her .345 batting average is No. 3 on the team.

“She did a good job at the bottom of the order for us and showed a lot of growth in the shortened season,” Howard said of Tesdahl, who has manned right field. “So losing anything that you’re used to being there is hard to replace, but we’ve got some girls that are stepping up and making some plays.”

The WCHS offense starts with its all-state lead-off hitter Kelly Stoakes. The lefty-swinging sophomore enters the regional with a .514 batting average and .614 on base percentage. Simply put, when she gets on base, good things usually happen.

Alayna Finucan, another sophomore who hits from the left side, isn’t far behind with a .429 average. Taylor McKinney (.296) and Jenna Miller (.278) have plenty of pop as well.

Miller, a junior, will be in the circle on Saturday. The now four-year veteran pitcher takes a 7-6 record and 3.38 ERA into the contest.

What: Class 4A Region 2 semifinal.

At Stake: Spot in Tuesday’s regional final round.