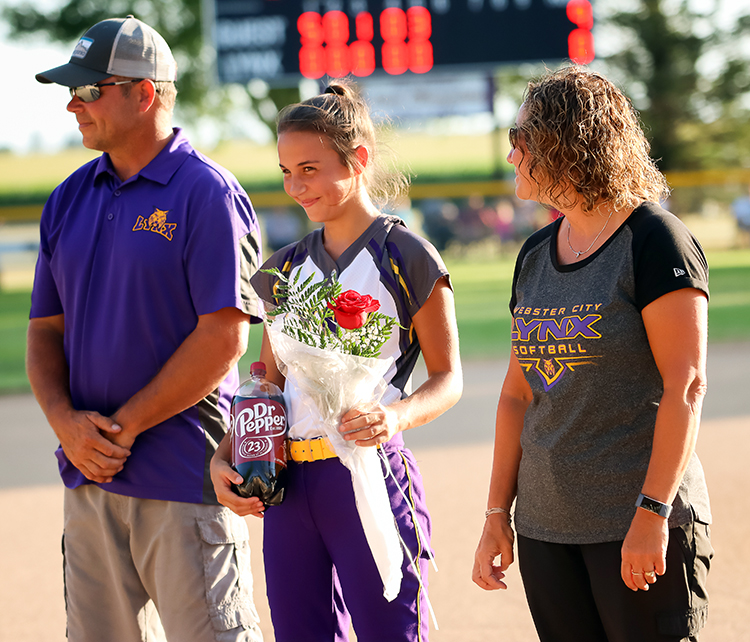 Tatum Goings (center), alongside parents Bub and Angie, is honored during Senior Night festivities prior to Webster City’s game against Roland-Story on Monday at Lynx Field. Photo by Jodie Casey

WEBSTER CITY — This was a lemon, there’s no other way to put it, and the Webster City softball team now has only a few days to turn it into lemonade.

Senior Night didn’t go according to plan for the Lynx on Monday, as they struggled at the plate during six of the seven innings and ultimately fell to non-conference opponent Roland-Story, 7-2, at Lynx Field.

The Norsemen (10-10) unleashed a five-run flurry in the top half of the seventh to break a 2-all tie en route to the victory.

“We’ve got to learn from it anytime there’s a letdown,” WCHS head coach Jess Howard said. “We have to be strong in every single inning.”

Outside of a sixth-inning hiccup, Norsemen pitcher Madison Geise was able to put it on cruise control. She took a no-hitter into the fourth inning until Tatum Goings produced a two-out single. Geise surrendered just three hits and fanned eight. 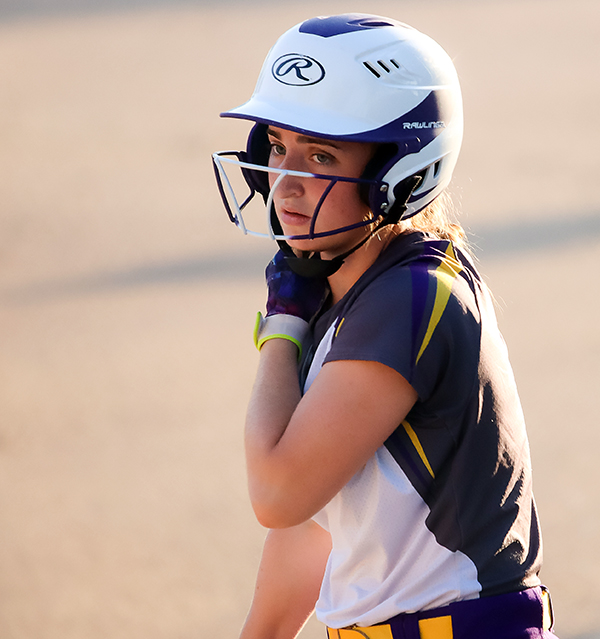 Geise also did plenty of damage at the plate with three singles and two RBIs. Her battery mate, Macy Friest, added two hits and two RBIs, as the Norsemen finished with nine hits off WCHS junior hurler Jenna Miller.

Ahead 1-0 after one inning, Roland-Story extended its lead to 2-0 in the fifth on a run-scoring single by Friest.

WCHS finally showed some life at the plate in the sixth, and it all occurred with two outs. Miller reached on an error, and Alayna Finucan came through with a double to give the Lynx a pair of runners in scoring position.

Right on cue, Faith Anderson mashed a Geise offering for a two-run single that evened the clash at 2. 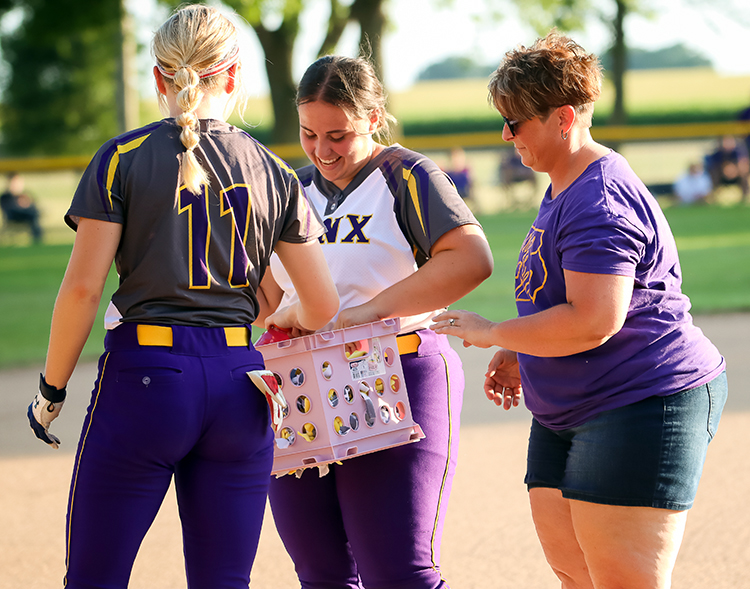 Roland-Story answered the bell by sending nine batters to the plate in the seventh. The Norsemen rattled off three hits, were issued two free passes by Miller and took advantage of an error to plate five runs. Friest’s RBI base hit put them in front to stay, and Geise provided some insurance three batters later with a two-run single. Lydia Oetker also drove in a run.

Miller was touched for nine hits in the loss. She walked three and struck out six.

Three Lynx seniors — Goings, Taylor McKinney and Harper Kopriva — were honored prior to the start of the contest.

WCHS will need to have a short memory as it now sets its sights on the postseason. The Lynx will host a Class 4A Region 2 semifinal on Saturday against either 13th-ranked Ballard or Boone at 7 p.m. Ballard (8-7) will host Boone (12-8) on Thursday for the right to take on WCHS. 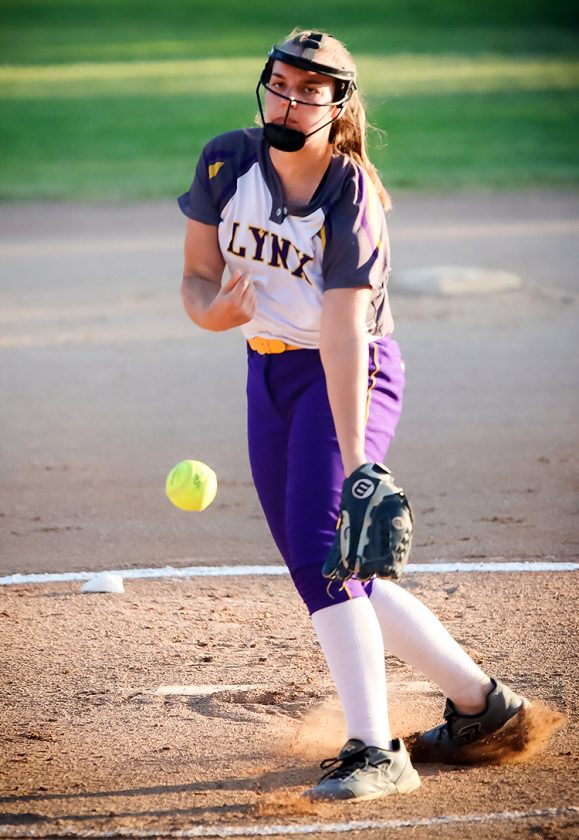 WCHS pitcher Jenna Miller goes to the plate with a pitch against Roland-Story Monday evening at Lynx Field. Photo by Jodie Casey

“We’re really going to focus on our mental game,” Howard said. “We’ve got to be ready to play every out, every inning and every pitch.”

Gilbert and Perry will meet in the other Region 2 quarterfinal on Thursday. The winner will advance to play ninth-ranked Dallas Center-Grimes on Saturday. 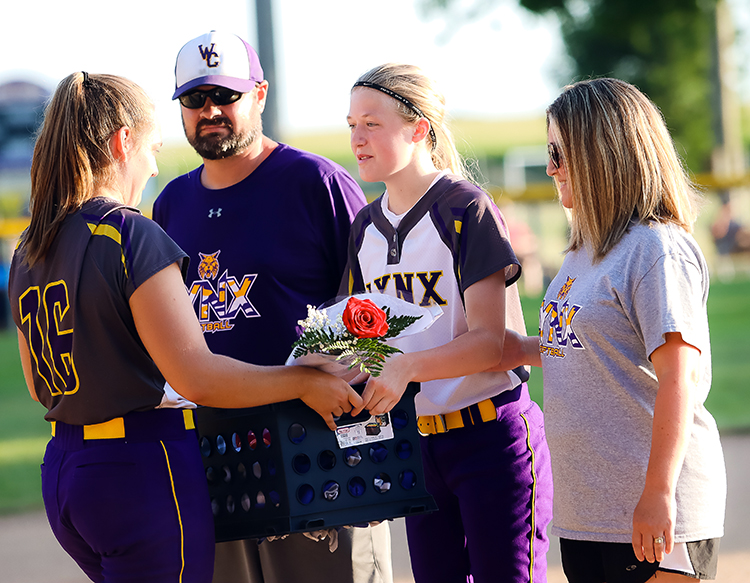 Tatum Goings (center), alongside parents Bub and Angie, is honored during Senior Night festivities prior to Webster City’s game against Roland-Story on Monday at Lynx Field. Photo by Jodie Casey

WCHS pitcher Jenna Miller goes to the plate with a pitch against Roland-Story Monday evening at Lynx Field. Photo by Jodie Casey