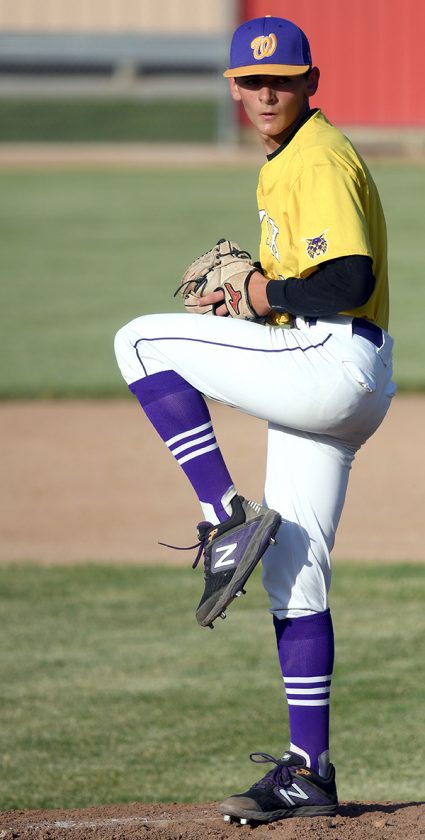 CLEAR LAKE — Adison Kehoe says it’s unfair to expect Tyler Olson to do Tyler Olson things each and every time he takes the ball and steps onto the mound. Webster City’s head baseball coach may be right, but if it’s not broke, well, you know the rest.

Olson, a WCHS junior, showed once again why he’s considered one of the top pitchers in Class 3A on Monday, as he baffled Clear Lake’s batters over seven innings in an 8-1 Lynx victory. Clear Lake’s one run in the fifth inning was unearned.

“It is unfair to always expect him to give you the innings and quality starts that he does, but he knows what he’s capable of doing,” Kehoe said of Olson, who surrendered just five hits and piled up 11 strikeouts in his second complete game in as many outings this season. “But as a true baseball fan, it’s a joy to watch him operate on the mound.”

In just his second season in the WCHS rotation, Olson now has a 13-1 career record with a 0.57 ERA and 126 strikeouts in 85 innings of work. He’s won seven consecutive starts since the one and only loss of his career to Humboldt on June 26, 2019 — a contest in which Olson allowed just one earned run.

Kehoe calls Olson’s ability a thing of beauty, one he needs to appreciate more.

“Sometimes I take things for granted too much when he pitches,” Kehoe said. “The things he’s done and is doing, you don’t see that very often.”

WCHS (3-1, 1-0 NCC) opened up defense of its North Central Conference crown by giving Olson all the run support he would need in the second inning. The Lynx touched Clear Lake starter Andrew Formanek for four runs in the frame and ran him off the mound by the third inning.

WCHS rattled off 10 hits by seven different players and made just one defensive mistake behind Olson to cruise to the win.

“This was far and away the best game we have played this year,” Kehoe said. “Granted, there are still things to work on, but the score and result speak for themselves.”

No. 9 hitter Connor Hanson continued to shine, as the freshman went 3 for 4 with two RBIs and two runs scored. After taking just seven varsity at bats a season ago, Hanson is hitting north of .500 during the early portion of this season.

“Connor is one of those kids who will be there before and after practice to get reps in,” Kehoe said. “So what’s currently going on is 100 percent him grabbing the bull by the horns and making himself into a better all-around baseball player. You get a kid like that in the No. 9 hole, it makes the lineup more potent, that’s for sure.”

An RBI single by Hanson opened the second-inning floodgate, all of which came with two outs. He also plated another run with a base knock in the fifth, as WCHS tacked on three more runs to push its lead to 8-0.

Hanson also roped a double, the team’s only extra-base hit in the game.

Chase Rattenborg went 2 for 4 with an RBI and two runs scored at the top of the Lynx lineup. Olson, Ty McKinney, Devon Stoakes, CJ Hisler and Trey Lyons all had one hit. Stoakes collected one RBI.