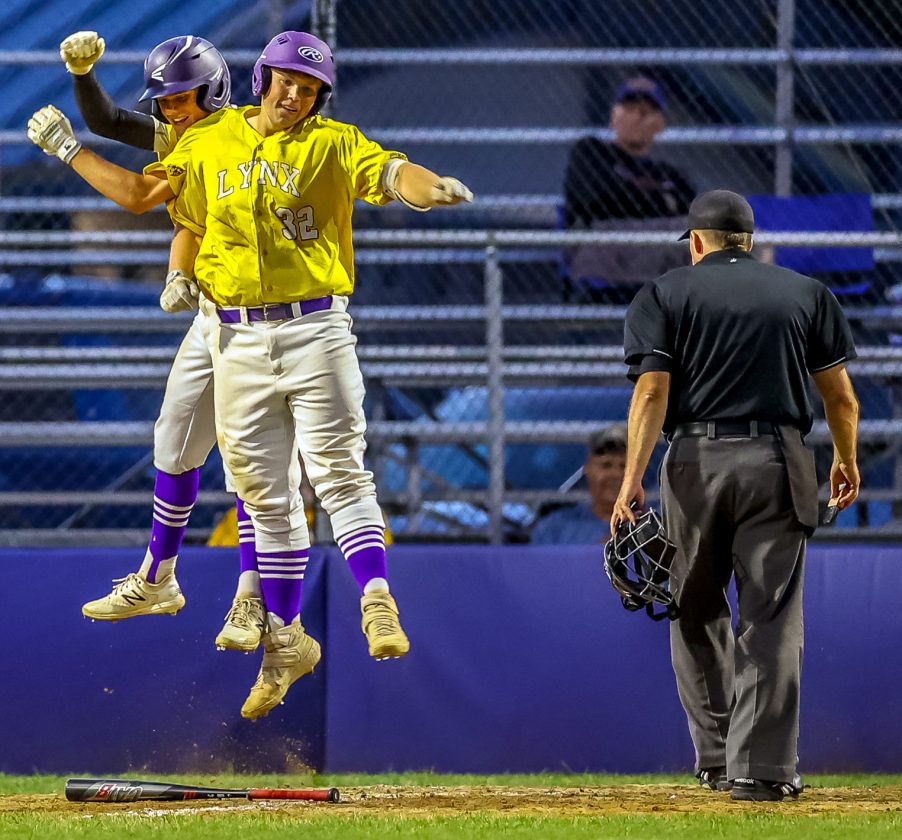 Beau Klaver (32) and Ty McKinney celebrate following Klaver’s sixth-inning grand slam against Humboldt Wednesday night in Humboldt. Klaver drove in all five of the Lynx runs in a 7-5 loss. Photo by Rick Thompson

HUMBOLDT — The North Central Conference standings weren’t in play here Wednesday night, but if the Webster City baseball team learned one thing it’s that claiming a second straight league title is going to be anything but a walk in the park.

Humboldt (3-1) took advantage of some early miscues to build a big lead and then withstood a Beau Klaver grand slam late to knock off the Lynx, 7-5, in what was considered a non-conference contest. The two teams will meet again on July 8 in Webster City where the NCC crown could very well be on the line.

WCHS head coach Adison Kehoe loathes losing, and the same could be said for moral victories, but he walked away from the setback with positive thoughts for the way his club battled back from a 6-1 deficit.

“As weird as this sounds, I’ve probably never been as pleased after a loss in all of my years of coaching,” he said. “This was by far our most team-oriented game that we’ve played and it showed that we’ve very capable of erasing a deficit. Until there are three outs in the seventh inning, we’re capable of stringing things together very quickly.”

Klaver, a sophomore, had 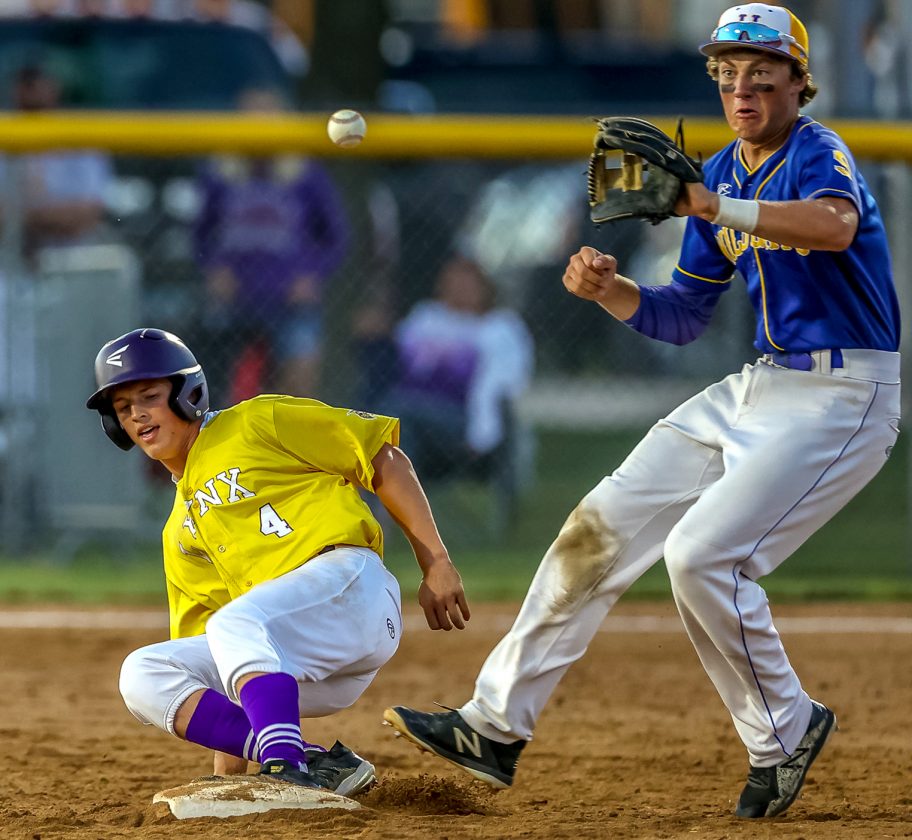 WCHS freshman CJ Hisler (4) slides back into second ahead of the throw during Wednesday’s game against Humboldt in Humboldt. Photo by Rick Thompson

a monstrous night at the plate. He drove in the Lynx first run on an RBI single in the second and then brought the team back into contention in the sixth with his bomb to left field that cleared the bases. He finished 2 for 3 with five RBIs.

“Beau is another one of those kids that will do the things you ask and then he does more,” Kehoe said. “A game like that will build his confidence immensely.”

WCHS (4-2) finished with nine hits off Humboldt hurler Cade Witzke, who went the distance to earn the win. Witzke struck out five.

Ty McKinney also had two hits in the loss, one coming in the sixth that ignited the Lynx rally, and CJ Hisler joined him with a pair of singles. Devon Stoakes, Tyler Olson and Connor Hanson all added a base knock.

Humboldt got to WCHS starting pitcher Zach Dyvig for five second-inning runs. Two of the runs came on a bases loaded bean ball and a bases loaded walk. Dyvig allowed five runs and struck out three in two innings of work.

Trey Lyons and Hanson both worked in relief. Lyons went three innings and was touched for just two hits; he fanned five. Hanson came on in the sixth and gave up one hit; he walked two and struck out two.

WCHS will return home on Monday for a league game against St. Edmond. The Gaels (3-2) opened their season last week by beating Humboldt, 3-1.

Beau Klaver (32) and Ty McKinney celebrate following Klaver’s sixth-inning grand slam against Humboldt Wednesday night in Humboldt. Klaver drove in all five of the Lynx runs in a 7-5 loss. Photo by Rick Thompson

WCHS freshman CJ Hisler (4) slides back into second ahead of the throw during Wednesday’s game against Humboldt in Humboldt. Photo by Rick Thompson