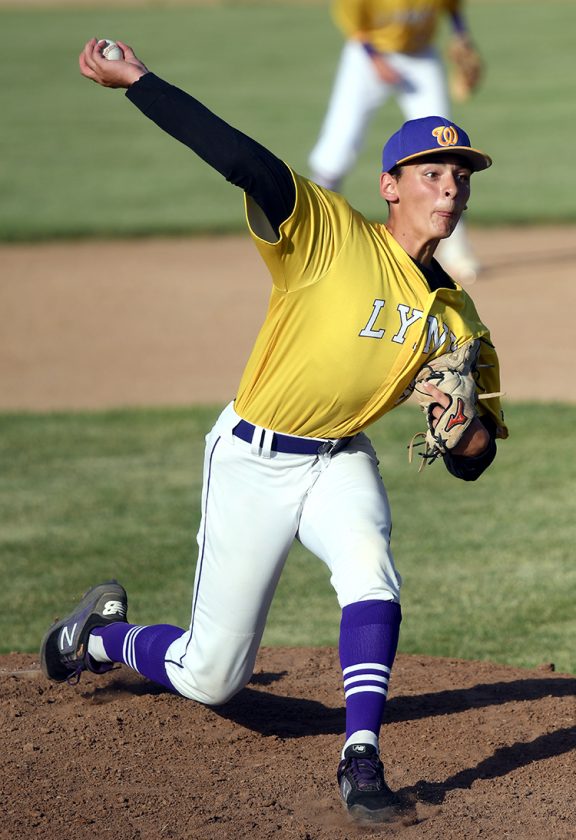 Webster City junior Tyler Olson goes to the plate with a pitch during Monday’s season opener against Hampton-Dumont/CAL in Hampton. Olson tossed a complete-game two-hitter with 13 strikeouts in the Lynx 4-0 victory. DFJ photo/Troy Banning

HAMPTON — Tyler Olson went 332 days between starts on the mound, but you never would have known it by his performance Monday night.

The Webster City junior wasn’t rusty. He was straight up filthy.

Coming off a Class 3A first-team all-state season in 2019, Olson picked up right where he left off last July by handcuffing Hampton Dumont/CAL over seven innings. He twirled a complete-game two-hit gem that featured 13 strikeouts against just one walk in a 4-0 WCHS victory.

And those two hits he allowed? He had the last laugh with pick-offs at first base.

“During COVID, a lot of pitchers took 21⁄2 months off, but Tyler was working every day,” WCHS assistant coach Jordan Moen said. “He was spot on. He knows there are still things to work on, but he was great.” 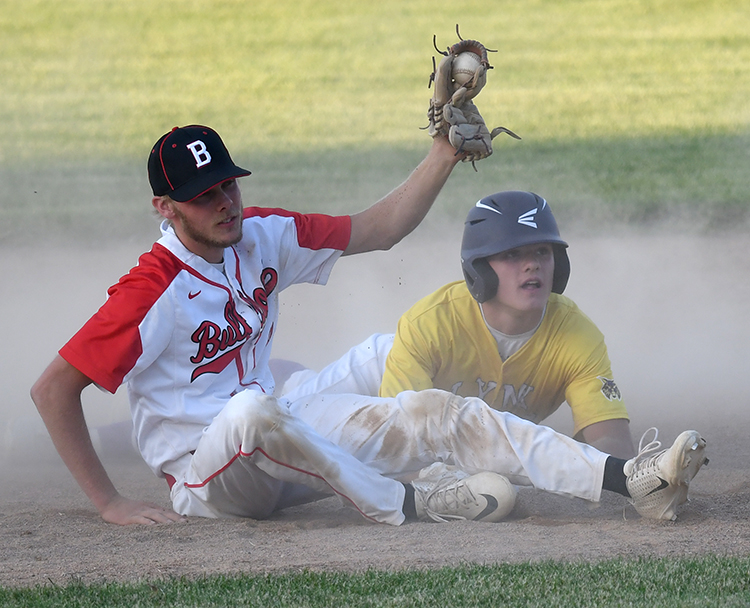 Since the start of the 2019 season, Olson is now 12-1 with a 0.62 ERA and 115 strikeouts in 782⁄3 innings of work. He threw 95 pitches on Monday, most of them for strikes, and he worked at a fevered pace that never allowed the Bulldogs to get comfortable in the box.

“The first game always feels good,” Olson said. “You’re nervous in the beginning, but after you get over that first inning you’re set for the rest of the year.

“Last year (Hampton-Dumont/CAL) hit me pretty well and I’ve thought a lot about that since we first saw our schedule. I didn’t want that to happen again.”

Olson whiffed two batters in each of the first five innings and only one ball — a first-inning fly out — left the infield during that span. He capped his performance by fanning three batters in the seventh to preserve the shutout. 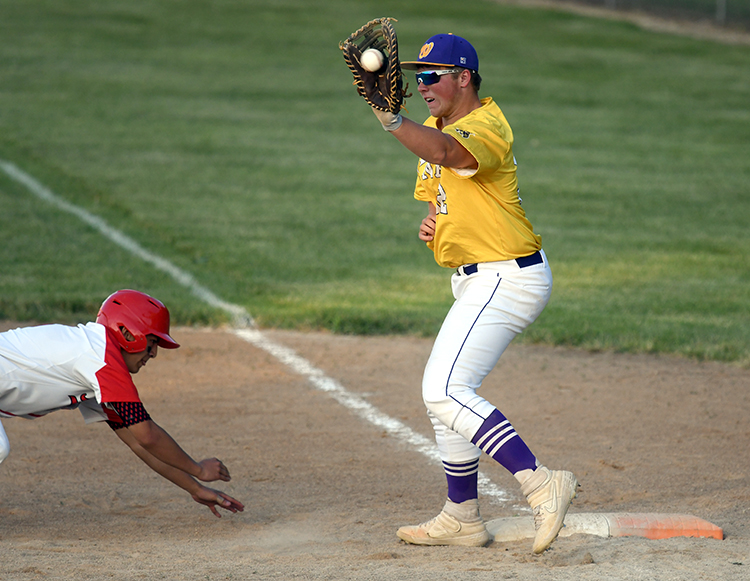 “He was hitting his spots all night,” WCHS catcher Devon Stoakes, who had the best seat in the house for the Olson Show, said. “He was loving his curveball. Even when he’s behind in the count, he’s confident he can throw it for a strike. If you’re confident, you might as well throw it.”

What makes Olson so tough — oftentimes impossible — to hit is his ability to keep batters guessing, and the Bulldogs had no clue throughout. His fastball and curveball looked identical out of his hand and the Hampton-Dumont/CAL batters were never able to pick up what was coming at them.

“If you have the same arm motion, it’s going to be difficult to read pitches,” Olson said. “At this level, you don’t see too many kids who can efficiently read spin on a ball.”

The victory took a backseat to just playing for many of the players. After a nearly three-month shutdown of prep sports due to the coronavirus pandemic and uncertainty that there would even be a season as late as a month ago, everyone agreed that just putting on the uniform was a thrill.

“It was way better than sitting in my (bedroom) for three months, that’s for sure,” Stoakes said. “It’s a little different (due to regulations), but I’m loving it. It’s fun to be back out and it’s what we need.” 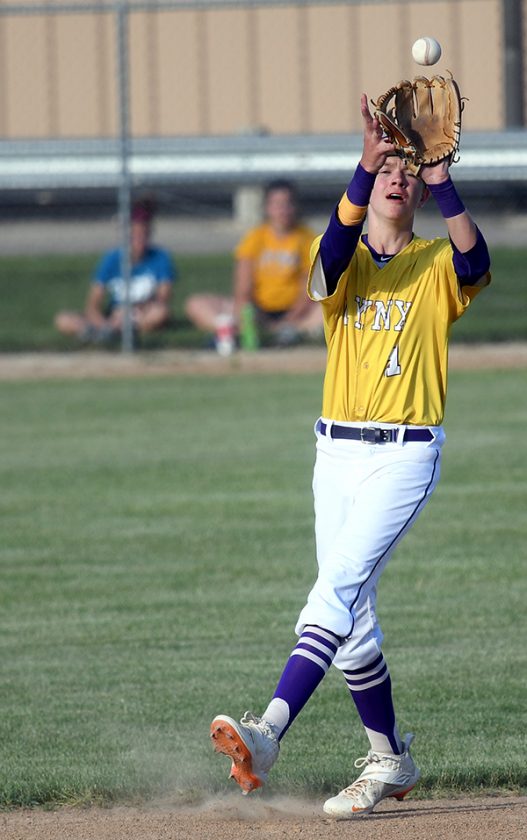 “It’s been a blast,” Moen said. “All of this hand-sanitizing and disinfecting is worth it. The kids are pumped to be back.”

WCHS (1-0) shelled out nine hits on the night and scored two runs in the opening inning to seize the advantage right away. The Lynx tacked on a run in the third and another in the seventh.

Olson, Ty McKinney and Connor Hanson all laced two hits, while Stoakes, Beau Klaver and CJ Hisler added one each. Olson, McKinney and Stoakes found the gap for doubles.

Olson collected the first hit of the season — a rope into left field that put WCHS in business in the first. Courtesy runners Keegan Hisler and Skyler Scott both eventually scored on wild pitches. 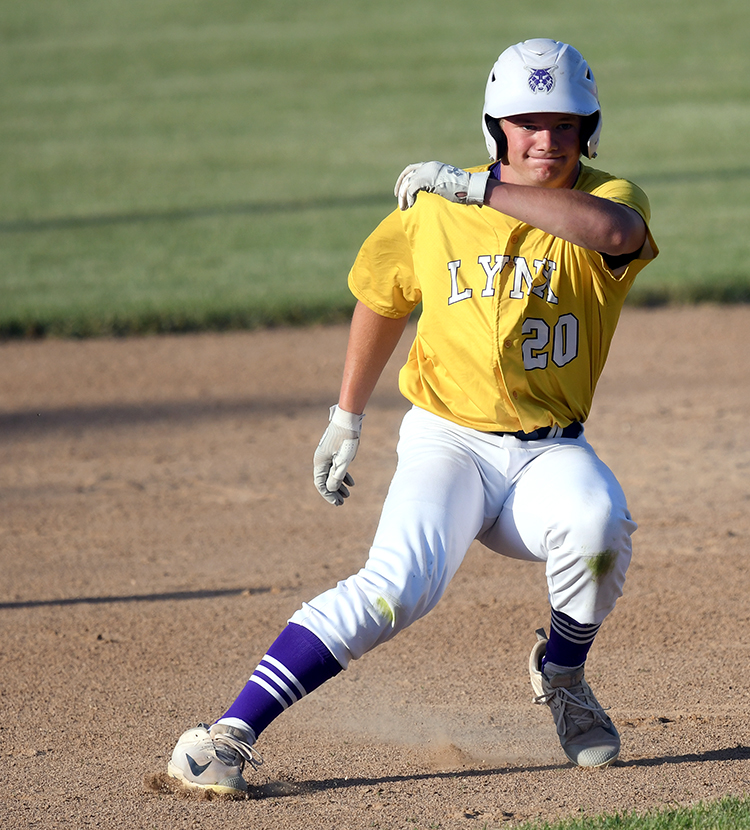 Klaver singled back up the middle in the fourth, moved to third on McKinney’s shot down the left-field line, and scored on a throwing error. Stoakes and Olson blistered back-to-back doubles in the seventh.

It wasn’t a perfect showing — there were some nerves and several base running hiccups — but it was what WCHS needed.

“It’s a big deal to get the kinks and nerves out,” Stoakes said. “I know we return a lot, but we’re still young, so this was good.”

Cal Heeren broke up Olson’s no-hit bid with an infield single in the third inning, and Marco Guerrero added a sixth-inning single to right-center for the Bulldogs (0-1). But both were quickly erased by Olson’s quick move to first, yet another weapon in his arsenal.

“I feel like that’s always been there, but maybe not that quick,” Olson said of his pick-off move.

Although WCHS and Hampton-Dumont/CAL are North Central Conference rivals, this was designated as a non-conference contest. The match-up that counts towards the league standings will happen next month in Webster City.

The Lynx will make their home debut this evening against Algona, which will also be a non-conference game. Olson won’t be available to pitch, but he was feeling like he could after Monday’s game.

“Right now, I feel like I can go more,” he said. “I’d say I could go (tonight) again, but that’s probably not going to happen.”

Webster City junior Tyler Olson goes to the plate with a pitch during Monday’s season opener against Hampton-Dumont/CAL in Hampton. Olson tossed a complete-game two-hitter with 13 strikeouts in the Lynx 4-0 victory. DFJ photo/Troy Banning