Instant Classic: No. 2 ’Cats win 9-inning thriller over No. 15 Lynx

McKinney, Miller crank HRs, rivals combine for 5 in all 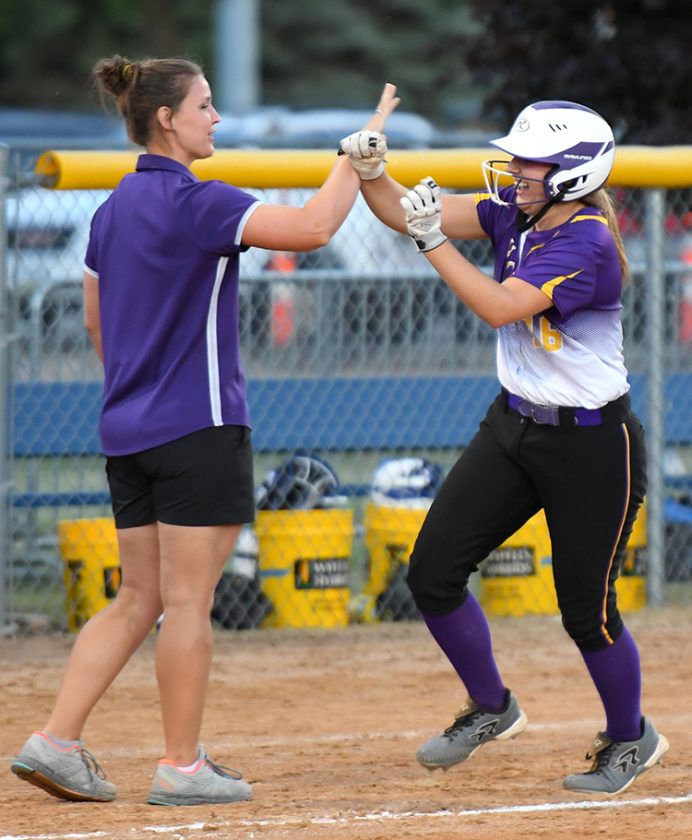 HUMBOLDT — The postgame meeting in right field was quiet and quick, and the Webster City players quickly, and silently, collected their belongings from the dugout and trudged toward the bus Wednesday night.

Head coach Jess Howard didn’t leave the field immediately though. She stood alone near the bag at first base, staring straight ahead with her hands on her hips, mentally lamenting what might have been.

This one hurt. Bad. Why? Because the Lynx wanted it. Bad.

Second-ranked (Class 3A) Humboldt and 15th-ranked (4A) WCHS put on an instant classic that went nine innings, featured five home runs and was decided by a deep fly ball and collision at the plate. The four-time defending North Central Conference champion Wildcats survived, 6-5, and essentially eliminated the Lynx from league title contention.

“The girls did a good job of fighting, and that’s the No. (2) team in 3A and we came out to win,” Howard, the Lynx head coach, said after the near-miss. “That’s a night where you wish you were the home team, giving you that one last chance. It didn’t go our way this time, but we showed we can compete.” 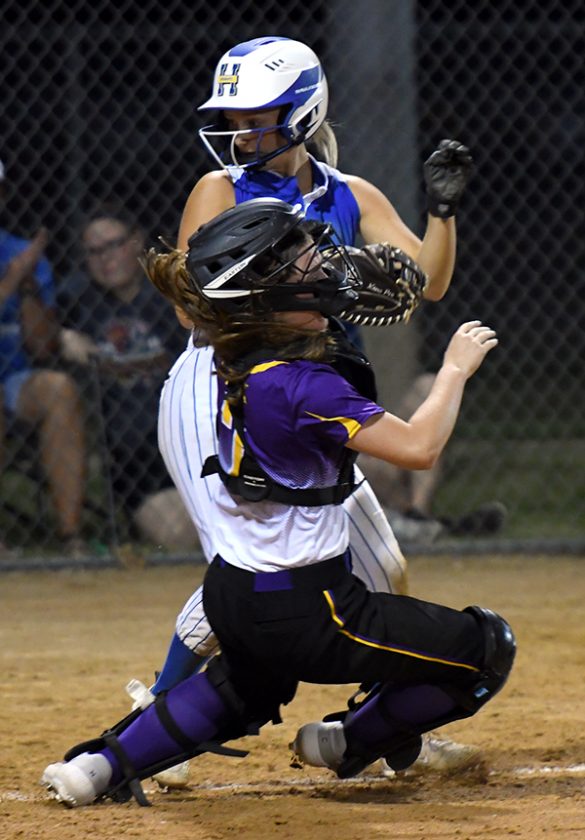 Taylor McKinney and Jenna Miller both went yard for WCHS (3-3, 2-2 NCC), while Ellie Jacobson, Mady Lange and Kendal Clark all turned the spacious diamond into a launching pad for the Wildcats. The two teams combined for 13 hits.

WCHS knew it was in for a nervous bottom of the ninth with the lethal top of Humboldt’s lineup set to step into the batter’s box. A one-out walk to Jori Hajek set things in motion and she quickly moved to third on a stolen base and throwing error. A few pitches later, Lange lofted a deep fly into right-center. Tatum Goings made the catch and quickly fired towards the plate. Her throw moved up the line, which forced Lynx catcher Kelly Stoakes to step into the base line to try to make a play. Hajek and Stoakes collided a few steps from the plate; Hajek was awarded the base on interference for the walk-off win.

Stoakes, the Lynx sophomore all-state phenom, laid on the dirt for a few moments before walking back to the dugout.

“She’s fine, just had the wind knocked out of her, and she had to do whatever she could to try to make that play,” Howard said of Stoakes. “You think about the situation and what you do … their three through six hitters are tough to go against.”

Lange went 2 for 3 with three RBIs against Miller, the Lynx junior hurler. 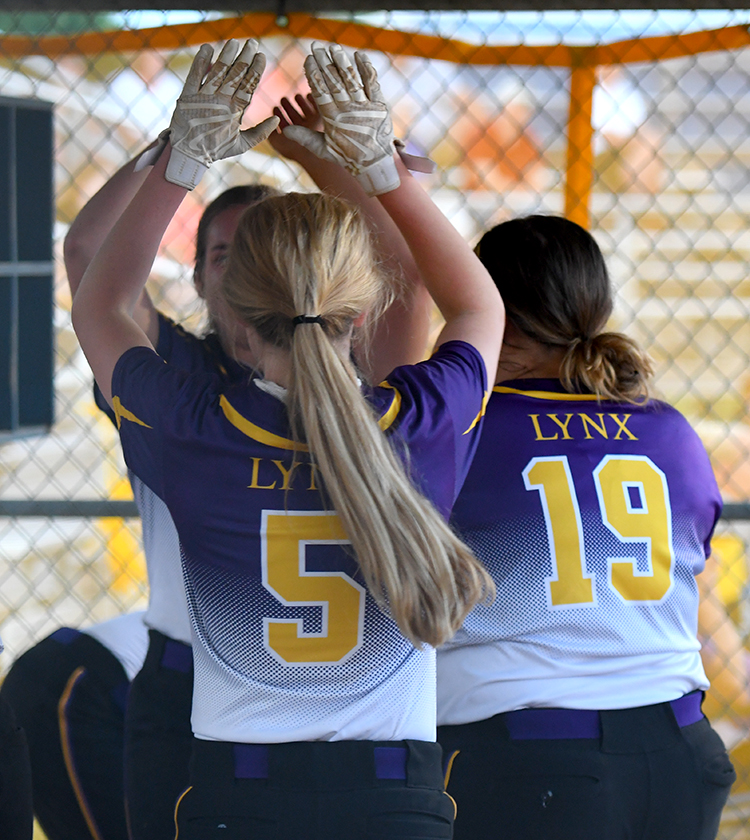 Jacobson, Humboldt’s all-state pitcher, helped herself in the first inning when she turned on an inside offering from Miller and hit a screaming two-run home run to left field.

WCHS drew even in the third when McKinney gave Jacobson a taste of her own medicine. With Stoakes aboard on a single, McKinney found a pitch in her wheelhouse and deposited it over the fence in left.

And the home run derby was just beginning.

It remained that way until the sixth when WCHS brought its own top of the order to the plate. Stoakes ignited the rally with a lead-off double to left-center and McKinney walked. Two batters later, Miller put a charge into a Jacobson pitch and deposited a no-doubt three-run home run to left to put the Lynx in front, 5-3. 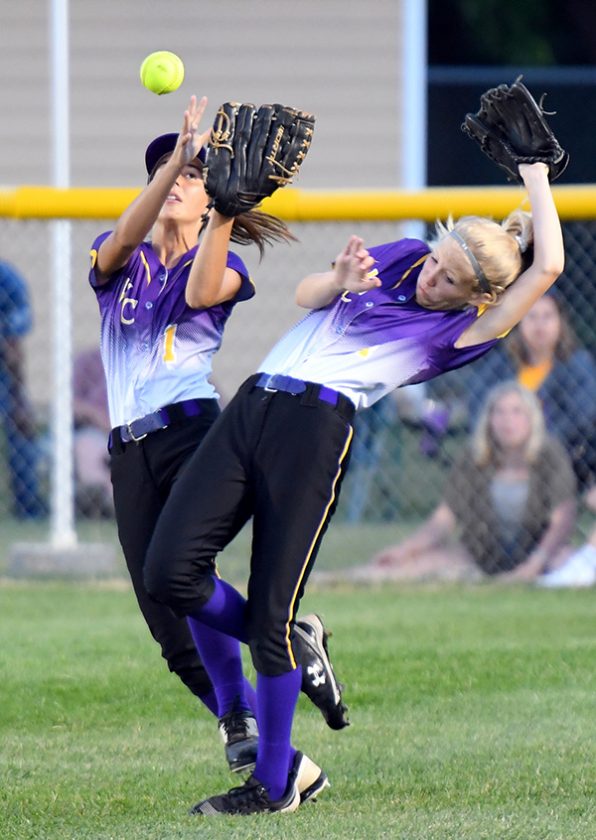 Webster City outfielders Tatum Goings (left) and Addie Tesdahl collide on a pop-fly hit in the gap against Humboldt on Wednesday in Humboldt. DFJ photo/Troy Banning

Stoakes (three) and Miller (two) accounted for five of the Lynx six hits.

“As a spectator, you’ve got two top pitchers in the state going at it and you’ve got hitters that are ready to battle them every single time,” Howard said. “(Jacobson’s) got a breaking ball that goes every way but straight, so for them to take advantage of that and get in her head was huge.”

Clark trimmed Humboldt’s deficit in half with a single swing in the bottom of the sixth — a solo shot to right-center.

Humboldt forced extra innings in the last half of the seventh courtesy of, once again, the top of the lineup. Carlie Thompson roped a lead-off double to left-center and eventually scored on a Lange sac fly to left that stayed just inside the park.

With Hajek standing on third as the potential winning run with just one out, Howard elected to intentionally walk Jacobson and Clark to load the bases. The chess move paid off, as Addie Thompson popped up a bunt and Lynx first baseman Faith Anderson raced in to make the catch. Hajek drifted too far off third and Anderson whipped the ball to McKinney for a double play that ended the threat. 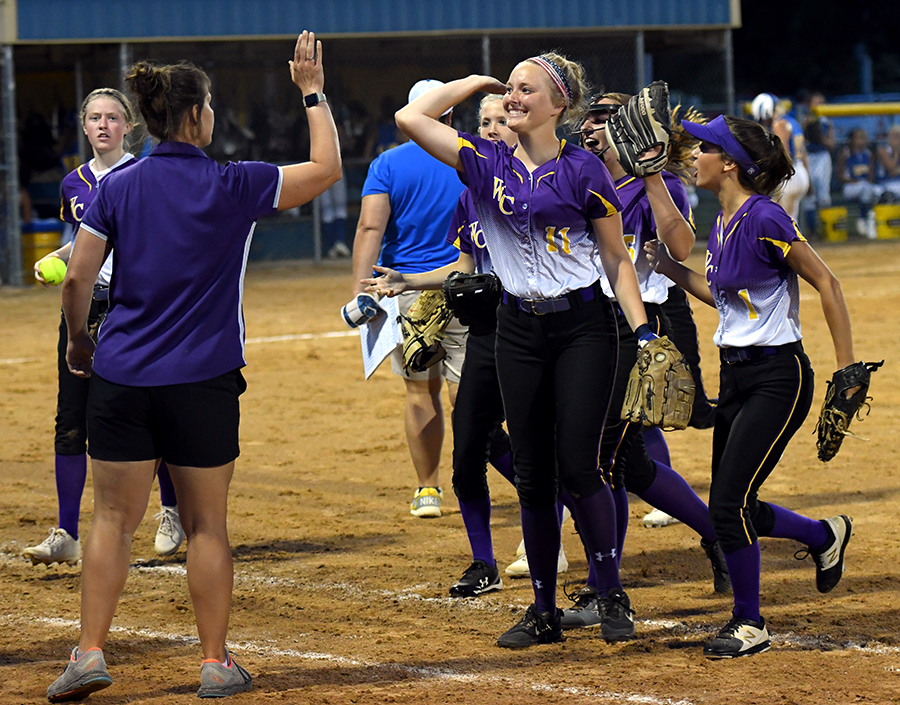 Miller finished with five strikeouts in a losing effort. Jacobson fanned 13 and kept the bottom half of the Lynx order to a combined 0 for 18.

Now trailing Humboldt and ninth-ranked (3A) Algona by two games in the league standings, Howard knows her team’s league title hopes have vanished. But she says there’s still plenty to play for.

“This is a year that winning the conference would be great, but it’s not a true conference running (due to the shortened schedule),” she said. “So what we’re taking away from this is what we’re capable of and we’re going to take that into (tonight).”

WCHS will be at Iowa Falls-Alden this evening.

Webster City outfielders Tatum Goings (left) and Addie Tesdahl collide on a pop-fly hit in the gap against Humboldt on Wednesday in Humboldt. DFJ photo/Troy Banning