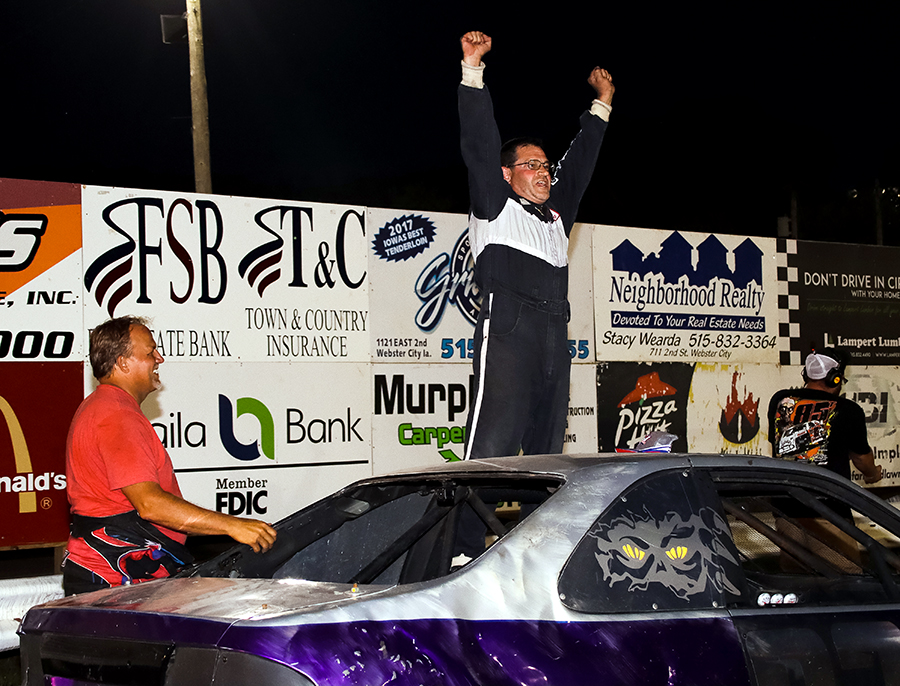 Jesse Brown of Nashua got his first taste of victory this season in the Seneca Foundry USRA Stock Cars. Last year’s track champ, Reid Keller of Webster City, settled for the runner-up paycheck while Bill Crimmins of Fort Dodge, polesitter Bob Sutherland of Blairsburg and John Campbell of Belmond rounded out the top five.

Another 2019 track champion, Ty Griffith of Webster City, was able to find his way into Integrity Trucking Victory Lane in the Stein Heating & Cooling USRA B-Mods. Dustin Steinbrink of Austin, Minn., nailed down a second-place finish while Jason Bass of Fort Dodge, Brandon Toftee of Otho and Doug McCollough of Webster City were third, fourth and fifth, respectively.

Diamond in the Rough USRA Hobby Stocks welcomed Jeremy Crimmins of Fort Dodge to the winners circle as he fended off the challenges from the two most prolific racers of 2020 so far — Scott Dobel of Manly and defending national champion Eric Stanton of Carlisle — for the win. Bryce Sommerfeld of Fort Dodge was fourth. Webster City’s Roger Haupt crossed the finish line fifth.

John Gill of Marshalltown celebrated a wire-to-wire win in the main event for the MyRacePass USRA Tuners. Ryan Bryant of Mason City settled for second place with Alex Hayes of Lone Tree taking third. Another Lone Tree racer, Ryan Havel, was fourth and Jade Lange of Humboldt rounded out the top five.

The dust will have barely settled on the historic Hamilton County Speedway driven by Spangler Automotive when the lights shine brightly again this evening and Wednesday for the Great American Stock Car Shootout.

Every racer will have the chance to pocket some serious cash and every racer will be part of the King of the Hill race. All drivers in all three classes (Seneca Foundry USRA Stock Cars, Stein Heating & Cooling USRA B-Mods and Diamond in the Rough USRA Hobby Stocks) will run two heat races from two different starting spots on Tuesday.

The event will put the spotlight on the best of the best in each divisions, with Stock Cars and B-Mods competing for valuable points in the Christie Door Company Iron Man Challenge.

Passing points will be used and the top 12 drivers will be locked into a Dash for Cash to determine the lineup for the first six rows of the Wednesday night’s main events. The remainder go to Last Chance Races on Wednesday.

Diamond in the Rough