Hisler, Bargfrede and Stansfield put together PowerPower presentation for city officials on benefits of new court

Local youths would like to see a basketball court placed in this open space at Wehrheim Park in the southwest section of Webster City. They’ve put together a proposal for the city that they hope will make the project come to fruition. Submitted photo

Local youths would like to see a basketball court placed in this open space at Wehrheim Park in the southwest section of Webster City. They’ve put together a proposal for the city that they hope will make the project come to fruition. Submitted photo

WEBSTER CITY — Local teenagers Keegan Hisler, Delainey Bargfrede and Josh Stansfield would like to see basketball come to Wehrheim Park in the southwest section of Webster City, and they’re doing everything they can to make it happen.

After presenting their idea of a basketball court at Wehrheim Park to the Webster City City Council in February, the trio spent the last few months researching what the project would entail and recently completed a PowerPoint presentation that has been given to city officials.

Wehrheim Park currently has recreation equipment — a jungle gym, slides and swings — that they feel are better suited for younger kids. A large section of the park is currently unoccupied, and the teenagers feel it would be perfectly suited to house a basketball court.

In their PowerPoint presentation, Hisler, Bargfrede and Stansfield say a basketball court would be beneficial to all of the children that live in the neighborhood. They also say it would promote an active, healthy lifestyle and give kids additional opportunities to enjoy outdoor activities.

After speaking with city officials, the group put together cost estimates for the project. With concrete, they estimate a total cost of approximately $28,000; the figure drops to approximately $16,000 if the concrete is replaced with asphalt. Those figures don’t include the possibility of lighting or fencing around the proposed court. 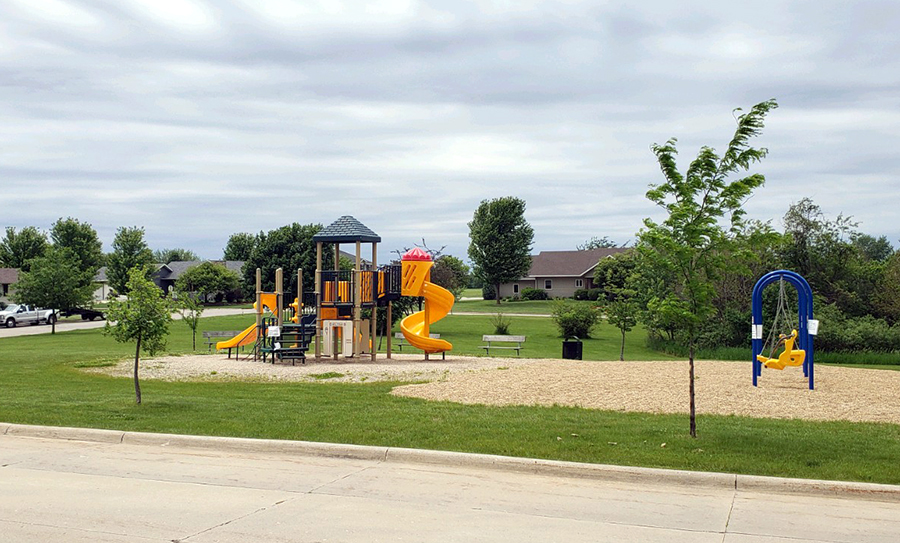 After putting the finishing touches on their PowerPoint presentation, which included video statements from other teenagers that live in the area, Hisler, Bargfrede and Stansfield handed it off to Breanne Lesher, the assistant director of recreation and public grounds with the city. The teenagers are hopeful the city’s parks and recreation department will discuss their proposal at its June meeting, and also offer up suggestions for any additional steps that need to be taken to get the project off the ground.

Meredith Bargfrede, a life-long Webster City resident and the mother of Delainey Bargfrede, says the kids are willing to assist the project in any way they can, whether it’s through fundraising or helping to bring sponsors on board.