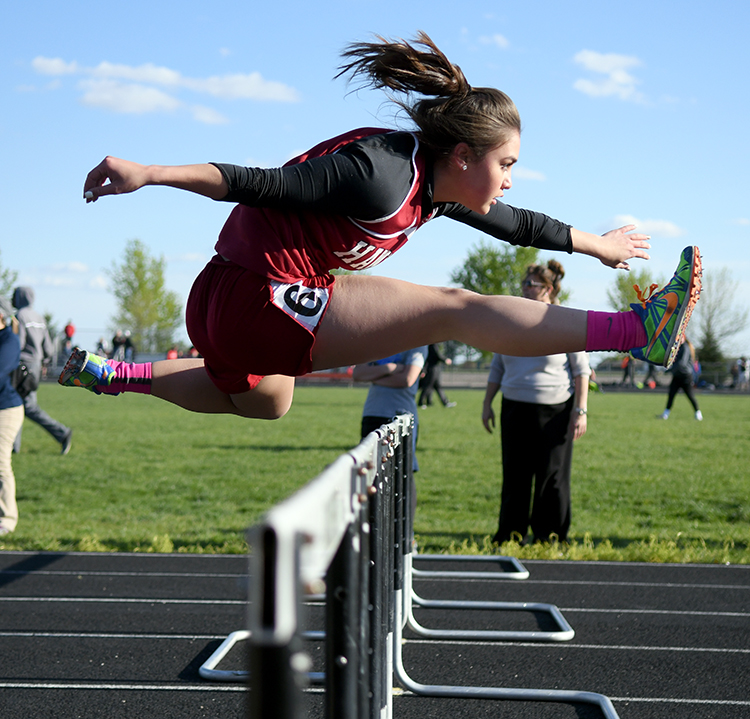 South Hamilton’s Hailey Cavan eyes the finish line on the anchor leg of the shuttle hurdle relay at a 2018 track and field meet. Cavan was denied the opportunity this spring to become a three-time state qualifier in the 100 hurdles. DFJ file photo/Troy Banning

WEBSTER CITY — Nothing is a given in sports, everyone knows that, but Hailey Cavan and Ashlyn Hay know they should both be in Des Moines this week. That was the ending they had envisioned, right up until the moment the coronavirus pandemic squashed the track season like a bug hitting the windshield of a car doing 65 miles per hour down the interstate.

The state track and field meet was scheduled for Thursday through Saturday at Drake Stadium. The sights, the sounds, the smells — two of the area’s premier female athletes will miss them all.

“It’s really sad,” Cavan, a South Hamilton senior and state qualifier in four events in previous seasons, said. “Not having the chance to run again, that’s the hardest thing.”

Hay knows exactly where Cavan is coming from. As one of the top Class 3A long jumpers in the area, it would have taken a catastrophic performance at the state qualifier to keep her out of the state field for the third consecutive season.

But the catastrophe known as COVID-19 came in March. 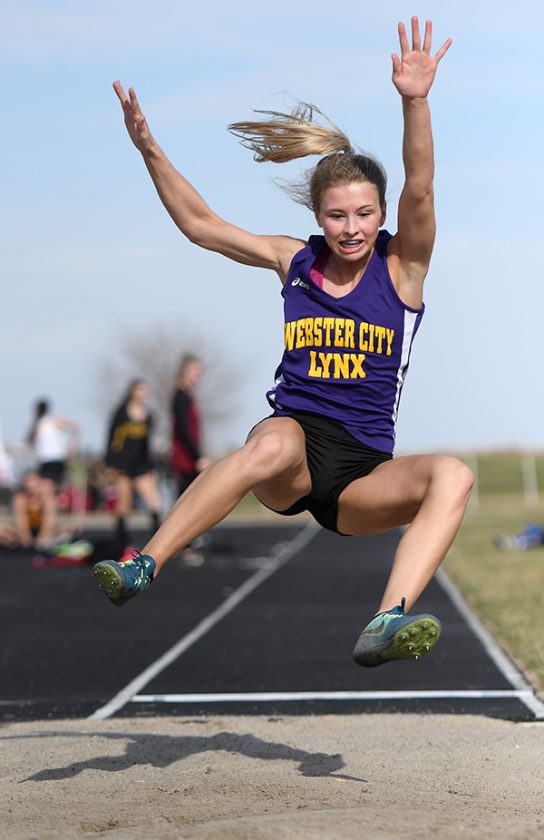 Webster City’s Ashlyn Hay lands in the sand during the long jump at the Bengal Relays in Gilbert last spring. Hay was a two-time state qualifier in the event. DFJ file photo/Troy Banning

“I’ve had a lot of memories popping up on my phone this week and it makes me realize what would be happening this week,” Hay said. “I’m bummed, but it’s reality now and I just have to accept it.”

Track athletes all across the state began preseason practices and some had the chance to compete in an indoor meet or two before the season was shut down in March. The announcement that the season would be canceled came a month later.

Cavan had dreams of a magical senior season. A state qualifier in the 100-meter hurdles as a freshman and junior, as well as a member of two state-qualifying shuttle hurdle relays, she thought this was her chance to contend for a 2A medal. But more than just individual goals, she saw the spring as a chance for her South Hamilton team to make some noise.

“I definitely think I could have made it to state in the 100 hurdles, and I think we would have had a really solid 4×100 team,” she said. “It was definitely going to be a year where we could compete.”

But it’s about more than the races. So much more, like the annual water fights the South Hamilton girls had at Adventureland Inn during their trip to state. Those bonding moments, Cavan will never get those opportunities again.

“That team atmosphere, that’s something I’m really going to miss,” Cavan said. “Being around (head coach Dan) Brodie and all of my teammates is what I will miss the most.”

Hay was excited for many of those same experiences.

“The little time I had with my team this year, I realized that it would have been such a great year,” Hay said. “We had so many hard-working girls that didn’t complain and were just there to run, and I think we would have come together as a team and done a lot of amazing things.

“Track is such a good sport because it teaches you so many things. Going out on your own and pushing yourself, but there are also those events where you can push yourself and your teammates.”

Hay, with three state-qualifying events under her belt entering her senior campaign, had individual goals as well. The last two state meets didn’t go as she had planned, particularly in the long jump, but she felt she put in the necessary work to achieve her goals in her final season.

“I feel like I did a lot more this year in the offseason so that I would be better for state,” she said. “It’s really hard to not get that chance.”

Cavan and Hay both said goodbye to the sport. Cavan is headed to Iowa State University in Ames in the fall to study kinesiology, while Hay will make her home in Cedar Rapids at Kirkwood Community College where she’ll study agriculture production management.

Hay isn’t done competing though. Once a competitive dancer, she took the leap and tried out for Kirkwood’s dance team and was accepted onto the squad.

South Hamilton’s Hailey Cavan eyes the finish line on the anchor leg of the shuttle hurdle relay at a 2018 track and field meet. Cavan was denied the opportunity this spring to become a three-time state qualifier in the 100 hurdles. DFJ file photo/Troy Banning

Webster City’s Ashlyn Hay lands in the sand during the long jump at the Bengal Relays in Gilbert last spring. Hay was a two-time state qualifier in the event. DFJ file photo/Troy Banning