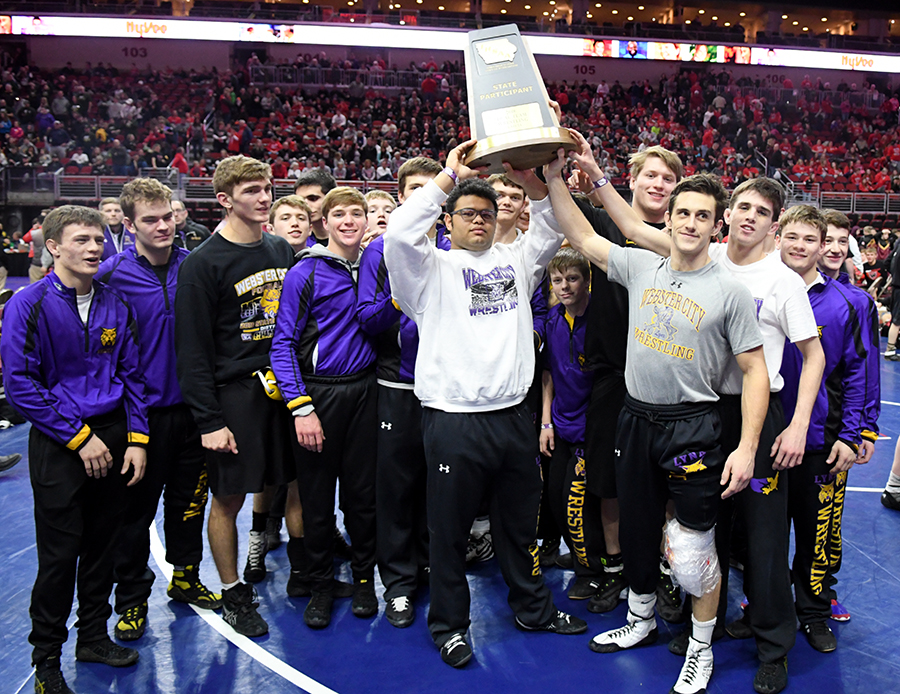 Members of the Webster City wrestling team hold up the Class 2A fifth-place trophy at the 2018 state duals in Des Moines. The Lynx have been a strong dual team over the past decade, but open weights and forfeits have left many programs unable to compete, prompting calls by some to reduce the number of weight classes. DFJ file photo/Troy Banning

Members of the Webster City wrestling team hold up the Class 2A fifth-place trophy at the 2018 state duals in Des Moines. The Lynx have been a strong dual team over the past decade, but open weights and forfeits have left many programs unable to compete, prompting calls by some to reduce the number of weight classes. DFJ file photo/Troy Banning

WCHS sophomore Cam Phetxoumphone won the Class 2A 106-pound state title in February. Under Pennsylvania’s proposed restructuring of weight classes for 2020-21, 106 would essentially be eliminated and fused with 113 for a new 110-pound class. DFJ photo/Troy Banning

WEBSTER CITY — Dan Brodie never has and never will tell his wrestlers to phone it in at a dual meet. But he’s also pragmatic; there are nights that his team has no chance, and that can get frustrating for everyone involved.

“There is a level of frustration because nobody likes looking up at a scoreboard and seeing it so one-sided,” Brodie, South Hamilton’s veteran head wrestling coach, said. “When it’s 72-6, that doesn’t help the psyche at all.”

It’s not that South Hamilton hasn’t had its fair share of quality wrestlers in years past. It just hasn’t had enough of them.

This past season, South Hamilton was forced to forfeit nearly 27 percent of the weights in its 23 dual meets. Its opponents sent no one out to compete more than 18 percent of the time. In 10 of the duals, either half or more than half of the 14 weight classes were forfeits. 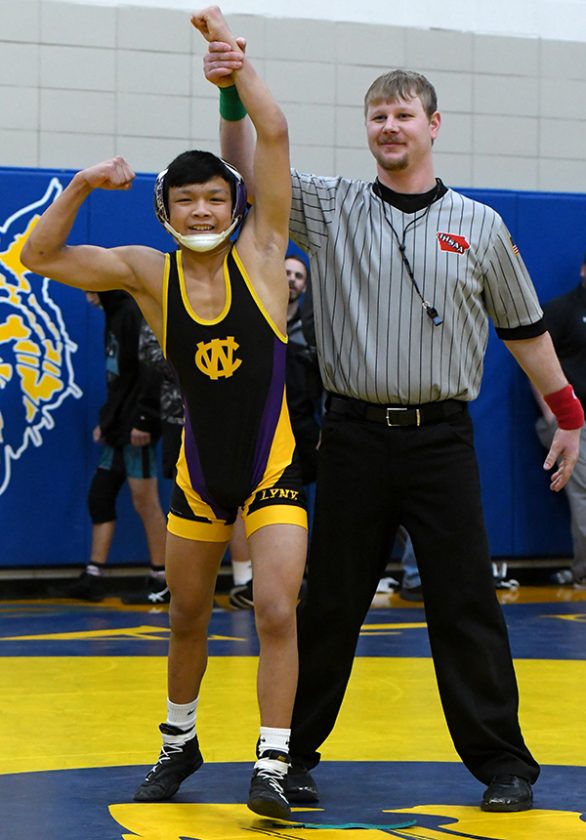 WCHS sophomore Cam Phetxoumphone won the Class 2A 106-pound state title in February. Under Pennsylvania’s proposed restructuring of weight classes for 2020-21, 106 would essentially be eliminated and fused with 113 for a new 110-pound class. DFJ photo/Troy Banning

But this isn’t just a South Hamilton problem. The rise in forfeits has long been an issue, one that has been exacerbated in recent years in even the most tradition-rich states like Iowa and Pennsylvania.

Pennsylvania wants to do something about it too. Reports out of the Granite State say the Pennsylvania Interscholastic Athletic Association is preparing to petition the National Federation of State High School Associations to reduce its number of weight classes to 12 for the 2020-21 season.

Lewie Curtis, who oversees wrestling at the Iowa High School Athletic Association, says that a reduction of weight classes was discussed by the NFHS in April, but it opted to keep the status quo for the time being. However, he says the subject is still on the table for the 2021-22 season.

“I think there’s going to be something done next year,” Curtis said. “If Pennsylvania is doing that as an experimental rule or to provide some information for the NFHS, then I probably think there’s a good chance.

“Dual-meet wrestling is under the gun. It should be really exciting, maybe the most exciting part of wrestling, but in some cases it’s not that way.”

The downside, of course, is a reduction would take away opportunities for kids to compete. Webster City has long prided itself on fielding a full team for dual meets and its depth has led to four trips to the state duals since 2011, the most recent in 2018 when it placed fifth (Class 2A).

During the 2019-20 season, the Lynx gave up just five forfeits in duals (1.9 percent). Their opponents forfeited 19.5 percent of the time.

“Most years we’ve been able to field a team, but I know there are a lot of schools that can’t,” Chad Hisler, Webster City’s head coach, said. “I would like to see more studying done on the subject, but I don’t necessarily want to see opportunities taken away from kids. If you take away two weights, that’s six state champions.”

Cam Phetxoumphone, a WCHS sophomore, went 42-0 and won the 2A 106-pound state title in February. Any reduction in weight classes would likely include the smallest kids.

“Wrestling does provide smaller kids a chance to compete,” Hisler said. “I think a study needs to be done to see what weights forfeit the most.”

If a reduction is a probability, then the question is how many should be eliminated? Curtis says he would be in favor of trimming it to 11 or 13 — an odd number that would make it easier to determine dual-meet winners in the event of a tie.

“In dual meets this past year, we had criteria going to seven, eight or nine on the list to determine the winner,” he said. “If you’re going to reduce it, then you should either go to 11 or 13 and then the criteria is who won more (weights).”

Another possibility is reducing the number of weight classes for dual meets, but keeping it at 14 for tournaments, which would include sectionals, districts and state. However, it’s unclear how that would work for wrestlers who would be forced to make weight in multiple classes on one day or two days notice week after week throughout the season.

Also, Curtis says it’s not feasible to suggest that a reduction could occur at smaller schools only. Premier 1A programs like Don Bosco and Lisbon routinely compete in duals against 2A and 3A teams, and they win more often than not.

“It’s not like any of these things you couldn’t create a rule, but I kind of doubt that would happen,” Curtis said. “Situations like Don Bosco and Lisbon, they are really solid and dual meets are something they’re very good at. It’s hard to say to them that you get 11 and Waverly-Shell Rock gets 14, especially when they wrestle each other.”

But Don Bosco and Lisbon are outliers among the small schools. At South Hamilton, it routinely forfeited from 106 to 120 this past season.

“For us small schools, it’s really hard to find 14 different body types that are serviceable at those weights,” Brodie said. “Dropping it to 12 would help smaller schools fill out a lineup and you’d see more competitive duals. It would hurt the large schools though.

“There are people I would hope are a lot smarter than I that are looking into these situations.”

In April, the IHSAA did intact several changes to the 2020-21 Iowa wrestling season.

Regarding dual meets, schools will now have the opportunity to opt out of postseason events — the regional and state duals. Schools would need to inform the IHSAA of their desire to opt out by the first competition date in either late November or early December.

“A change needed to be made,” Curtis said. “We had some schools that just didn’t want to be a part of it and we told the committee that we were the ones forcing them to go. It’s a step in the right direction … we had some situations where we were throwing 32 teams out there (for team regional duals) and 14 of them would have rather stayed home and practiced.”

In past years in 1A and 2A, the team champion and runner-up at each sectional has advanced to the regional duals. Going forward, regional qualifiers will now be comprised of sectional champions and the next eight highest ranked teams by the Iowa Wrestling Coaches Association.

And starting in 2020-21, state tournament seeding will now include all 16 wrestlers in each bracket. In the past, the top eight have been seeded, with the other eight participants randomly drawn into the bracket.