I WAS A KID AGAIN 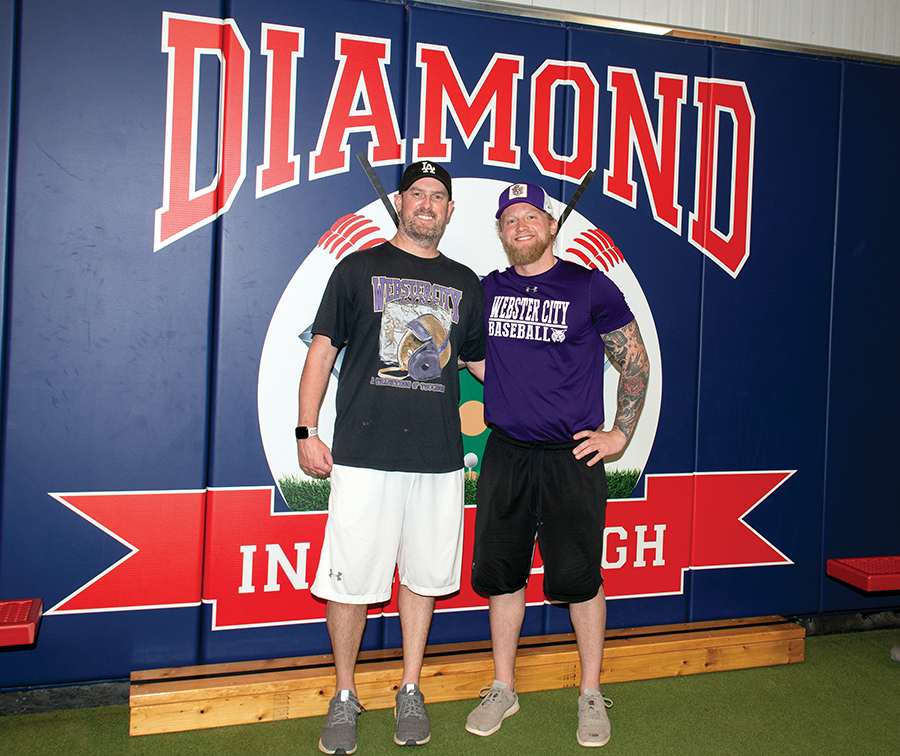 Daily Freeman-Journal sports editor Troy Banning (left) and Webster City head baseball coach Adison Kehoe pose together at Diamond In The Rough on Monday. Kehoe’s work with pitchers has helped to transform the Lynx program over the past three years.

It was about two weeks ago that I received an intriguing text message from Webster City baseball coach Adison Kehoe. The gist of the message: How would I like to go through one of his pitching workouts and write about it?

Let’s see here — I’m old (44 last month), out of shape, and I haven’t seriously thrown a baseball in almost 26 years. That’s right, 26 years. It was in Victor, Iowa, July of 1994, in my final high school baseball game, to be specific. Yep, I still remember it.

With all of that running through my mind, it took me less than 10 seconds to text Kehoe this response: That sounds absolutely fantastic!

No matter how old our bodies get, we’re all still young at heart.

When I was a kid, and I’m talking about from the time I was five years old, I was a baseball player. Other sports came later, but during those early years in the mid-1980s, the diamond meant everything to me. 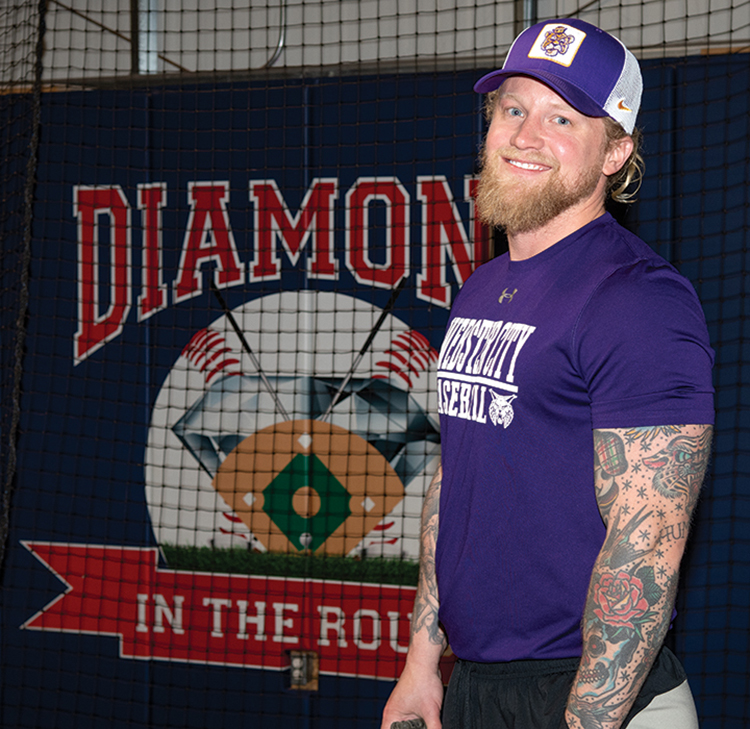 Webster City baseball coach Adison Kehoe has led the Lynx to two North Central Conference titles in his three seasons at the helm. All-state pitchers Max Hackbarth, Dylan Steen and Tyler Olson combined for a 37-6 record with 494 strikeouts in 3091⁄3 innings under Kehoe’s direction over that time. DFJ photo/Troy Banning

I was a pitcher and I wasn’t bad, if I can say that with any sense of modesty. I was left-handed, I was small and I sported a thick pair of glasses, but I threw hard and didn’t give up many hits. In one seven-inning Little League game, I fanned 20 batters. Yep, I still remember that too and I’m sure my dad could give you a batter-by-batter recap if you wanted.

I think I still threw hard(ish) in high school, but I had no control. Seriously, my fastball was as likely to clear the umpire’s head as it was to find the strike zone. And so I transitioned more to the field, pitching only occasionally when my coach was in a good mood. During my senior season, I struck out 18 in one game, but also walked eight and plunked a couple other batters. I’m guessing my arm was dragging after that one.

How hard did I throw? I honestly have no idea. I never had a radar gun on me. Back in the early 1990s, that simply wasn’t the norm.

With all of that in mind, I drove to Diamond In The Rough on Monday fully expecting to embarrass myself in front of Kehoe and DITR owners Kim and Dave Stoakes. I was at peace with that too.

So how did I do? Kehoe chuckled when I asked the question and it made me nervous.

“If you would have told me you would throw 40 to 50 percent strikes, which you did, and all of a sudden you’re consistently clocking in the upper 70s with it being 20-plus years, I would have said you’re out of your mind,” Kehoe said. “Let’s put it this way, I’d ask you to come back.”

I hit 80 on the gun once, at least Kehoe told me I did. He may have just been being nice, but I’m going to run with it anyway.

I had no idea what the workout was going to look like when I walked through the doors, and 90 minutes later I exited with a couple of conclusions. One, Kehoe knows what he’s doing and, two, it’s not a coincidence that three Webster City pitchers — Max Hackbarth, Dylan Steen and Tyler Olson — have combined to earn five first- and second-team all-state accolades since he took over the program in 2017.

Kehoe started off by testing my flexibility. Right about the time he grabbed my left leg and extended it upwards, my quad muscle screamed at me that this might not have been such a good idea.

We transitioned to a warmup — a simple game of catch like I played with my dad and brother more times than I can count when I was a kid. After that, it was time to check out my pitching form.

Kehoe watched me throw two pitches, that was all he needed to see. My mechanics were decent, he said, but I was off-balance and I was all arm with a high release point. Over the next five minutes, he offered up more coaching than I received in all of my younger years. He pushed me to rely on my hips and legs, and to keep my arm lower and closer to my body at the point of release.

Was it comfortable? Absolutely not. Did I throw several pitches straight into the ground? Absolutely.

Next came the extended bullpen — work off the mound from 70 feet rather than the normal 60 feet, 6 inches. Again, uncomfortable, but as Kehoe said, there’s a method to his madness.

“The first thing I always say to pitchers is when you’re here, you have to be comfortable with the idea of being uncomfortable,” Kehoe told me. “I’m going to put you in different positions with your arms, your hips that, I promise, not a lot of kids have done before. But when they finally have that ah-ha moment, it brings it all together.”

Chaos throwing, as Kehoe calls it, added to the variance. Five different weighted balls were placed in front of me and I had to think — always think, Kehoe said — about the different ways to use my body and arm with each one.

“The tools we have, like the weighted balls and the bands, allows us to have access to things for your entire body,” Kehoe said.

And then came the real fun — the burn out throws. My only regret is no one was there with a video camera.

Backpedal, pivot and throw as hard as you can. Or crow hop into it and let it fly. Those were the choices. I’ve got Kehoe screaming at me to get me amped up, and I gave it everything I had. My follow through included a face plant or summersault every time, something that Kehoe assured me he sees on a regular basis from his players.

In those moments, I was a kid again. Truly, I haven’t had that much fun in years. Personally, I think Kehoe could start a side business for has-been players like me. I’m guessing there are a lot of individuals that would pay just to see if they’ve still got it (or at least some of it).

This was just one of the workouts that Kehoe puts his pitchers through on a weekly basis in the lead-up to a season. He pushes hard and demands a lot, both mentally and physically, but the payoff is in the results he’s produced.

“Doing things that are out of the ordinary, once the game stuff starts, they’ve been uncomfortable enough,” Kehoe said. “A game isn’t as weird or intense as we make it out here. And when it comes to our circuit training, our chaos throwing and our connection throwing, it gets intense. They go against each other. I’ll say, ‘This week, who’s beating Tyler?’ It’s a competition.”

And now for the aftermath … that was rough.

As I write this two days later, my body still hurts. A lot. Hips, thighs, ankles, back — they’re all screaming like my daughters do when I tell them I’m going to post a TikTok dance for their friends to see. The middle finger on my left hand is twice the normal size and purple. Surprisingly though, my left arm — shoulder, muscles and elbow — all feel fine. Go figure.

Ice has been my best friend over the past 48 hours. That’s not changing anytime soon either.

But if Kehoe asked me if I was ready for Round 2, I’d quickly tell him absolutely once again. To get the chance to be a kid again, if only for a moment …

Daily Freeman-Journal sports editor Troy Banning (left) and Webster City head baseball coach Adison Kehoe pose together at Diamond In The Rough on Monday. Kehoe’s work with pitchers has helped to transform the Lynx program over the past three years.

Webster City baseball coach Adison Kehoe has led the Lynx to two North Central Conference titles in his three seasons at the helm. All-state pitchers Max Hackbarth, Dylan Steen and Tyler Olson combined for a 37-6 record with 494 strikeouts in 3091⁄3 innings under Kehoe’s direction over that time. DFJ photo/Troy Banning

I’d be crazy not to.