From Prep to Pro, Part II: THE GRIND

Ullestad starts his career on the ground floor with help from family, friends 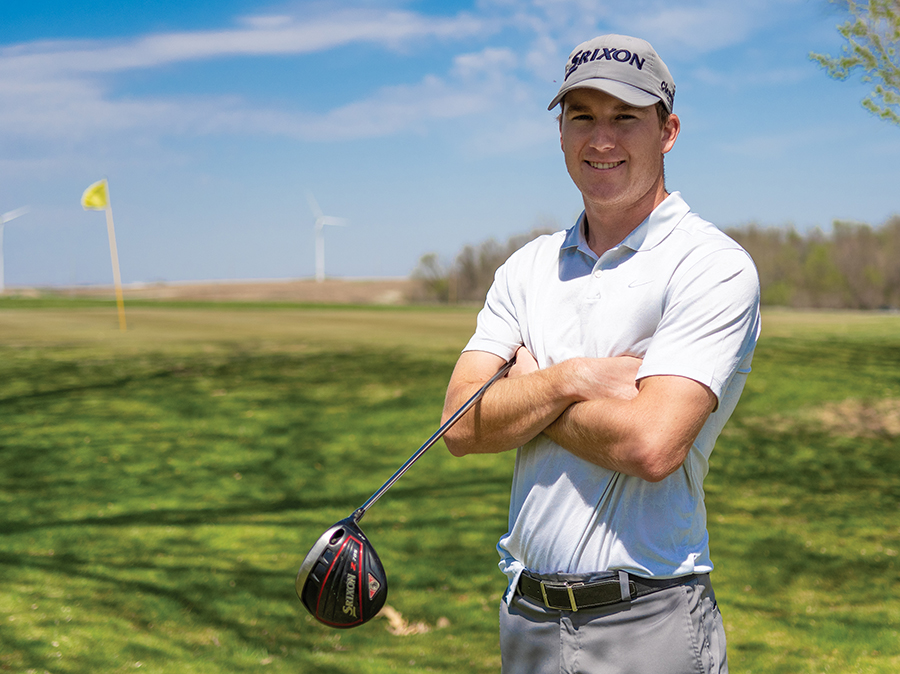 Trevor Ullestad, a 2014 South Hamilton graduate, poses with his Srixon driver at the Jewell Golf and Country Club last week. Ullestad is attempting to become a successful professional golfer and he’s had help from family and friends along the way. DFJ photo/Troy Banning

Trevor Ullestad, a 2014 South Hamilton graduate, poses with his Srixon driver at the Jewell Golf and Country Club last week. Ullestad is attempting to become a successful professional golfer and he’s had help from family and friends along the way. DFJ photo/Troy Banning

It’s Monday morning, May 20, 2019, and the conditions are less than ideal at Point Grey Golf and Country Club in Vancouver, British Columbia. The temperature hovers in the mid-50s, not bad for the southwestern Canadian province, but it’s raining.

And Trevor Ullestad is standing on the first tee, attempting to qualify for the Freedom 55 Financial Open — the first stop on the Mackenzie Tour — without golf shoes. His own clubs, fitted specifically for his body and bent perfectly to reflect his swing, are absent as well, a victim of baggage handling in Dallas. They’re on an airplane somewhere, bound for Vancouver International Airport, but that doesn’t do Ullestad any good as he grips the unfamiliar driver and prepares to tackle the 543 yards that separate him and the green.

“That was a nightmare trip,” Ullestad, a 2014 South Hamilton graduate, says as he thinks back to his first excursion north of the border in his journey as a golf pro. “My connecting flight was in Dallas and there were huge thunderstorms and delays. I got to Vancouver that (Saturday) night and my clubs didn’t come. My clubs still weren’t there on Monday, so I almost had to rent some crappy clubs from the course, but a guy let me use his clubs and they were an inch shorter and just not anything like my clubs. I got the clubs an hour before I was supposed to tee off and then it started raining 10 minutes before I teed off. So I was playing in the rain with no golf shoes and with not my clubs, but somehow I shot 2-over. I was actually pretty happy about that.”

Ullestad has a lot of stories like that. None that can match the constant misfortune at every turn, but enough to illustrate the day to day grind of trying to achieve the nearly impossible on the pro golf circuit. 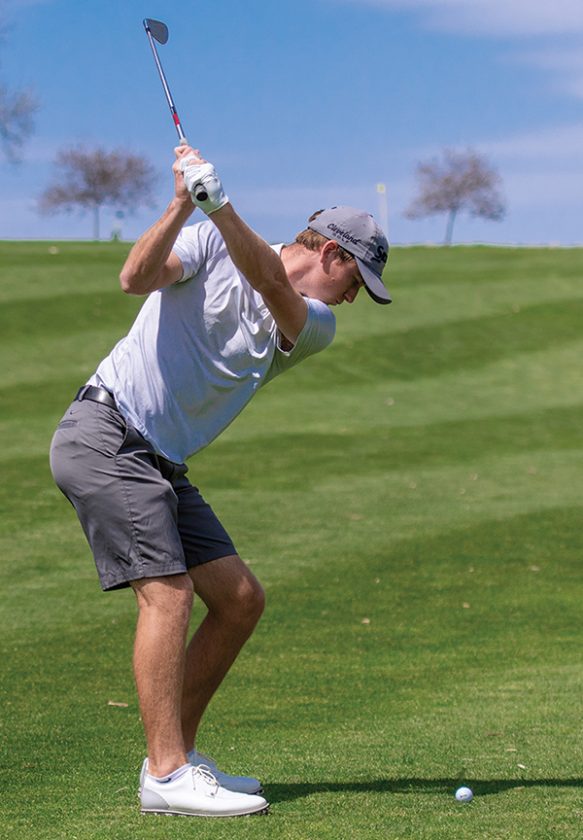 He doesn’t live in the PGA Tour bubble of Cadillac courtesy cars and golf course attendants carrying his bag from the trunk to the tee box. He doesn’t have a caddie and he’s not hitting Pro V1s on the practice range.

But the dream of all of those things is why he accepts the hardships. Today’s grind is tomorrow’s prosperity.

“It’s really hard,” Ullestad said. “There are so many guys that you think are going to make it to the PGA Tour and just never do. There are guys on the mini-tours that would make cuts and keep their card on the PGA Tour right now, but they just haven’t played well enough at the right time to get there.

“I don’t want to say it’s all luck because you’ve got to play really well, but you’ve got to be lucky enough to do it at the right times in the big events and show up when you need to.”

And the pressure to make enough money simply to survive is equally draining. 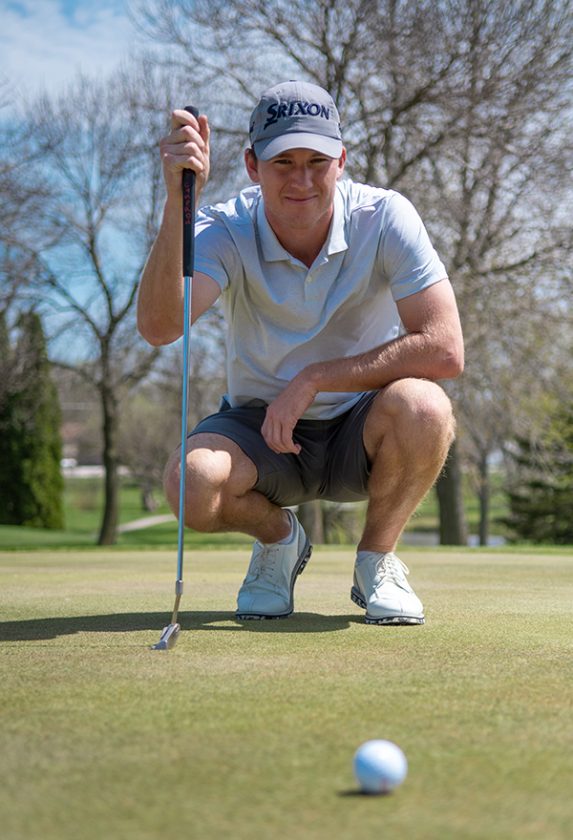 Ullestad was lucky enough to get the attention of Srixon, a well-known company that specializes in golf and tennis equipment and apparel. He wears a Srixon hat and uses Srixon clubs, all supplied to him at no cost, but the company isn’t paying him. He doesn’t have corporate sponsors or a blank check that affords him the luxury of a bad week or month.

Instead, Ullestad has relied on family members and close family friends to help offset the massive financial burden. Just to enter a tournament can cost upwards of $1,100. On the small tours around the Midwest, the payoff could be as much as $25,000 for a win, but the purse drops significantly further down the leaderboard.

He’s finished in the money in some tournaments, but he still needs support.

“I’ve been lucky enough to have some people support me, but everything I make goes right back into it,” Ullestad said. “Some people say ‘here’s my (credit) card and go have fun for the year and try to make it,’ but I’m not in that situation and that’s OK.

“My family and family friends support me like crazy and I couldn’t do it without them. They’ve pushed me to keep going when I’ve had doubts or wondering if I’m doing the right thing. But they say you’ve got to keep going and that’s huge.”

Ullestad hasn’t had to sleep in his car during his travels, but plenty of other aspiring pros have and do on a weekly basis. He half-jokes that he’s contemplated buying an SUV and throwing a padded mattress in the back, but for now he settles for a cheap motel or an Airbnb as he moves from one place to the next.

The thought of selling shares in himself is an idea. The concept is someone can buy a share or multiple shares in his career, and then recoup the investment or even make money when Ullestad cashes in.

“I hate asking people for money and luckily I haven’t had to do that too much,” he said. “But I haven’t made any money doing this. It’s more of an experience at this point, but hopefully I can pay it back some day.”

Ullestad doesn’t run from the truth. He knows that the title “professional golfer” probably sounds glamorous to many people, and it can be. He’s just not there.

“I don’t have kids and I don’t have many responsibilities at this point, so I’ve got to do this why I can,” he said. “My biggest fear is regret. I came all that way (from Jewell, Iowa) to here to give myself a chance to take a shot. If I don’t make it, that’s fine, but I don’t want to be old and look back wondering why I didn’t try.”

But even at the so-called Triple-A level, it’s not what many would expect. The truth is, he had bigger galleries of fans back when he competed for South Hamilton.

“More people go to high school tournaments than some of these pro tournaments,” he said with a chuckle. “You can be trying to qualify for a Korn Ferry event on a course that’s just not very nice. The greens have been aerated with bumps all over the place and you’re playing for your livelihood.”

He was scheduled to compete in the Mackenzie Tour Q-School in March when the coronavirus pandemic shut everything down, which is why he sits back in his hometown now and waits to restart his career.

All he can do presently is practice and try to stay mentally sharp. He can spend upwards to six hours a day at the course, the most meaningful portion spent around the greens. That’s where successful pros separate themselves.

“That’s what I spend most of my time on,” he said. “On the PGA Tour, they don’t hit it any farther than me. They just don’t make bogeys because they get up and down and they don’t 3-putt. It’s more of a game of not making mistakes, not making bogeys, than it is making a bunch of birdies. When you’re playing well, the birdies just come.”