From Prep to Pro, Part I: THE EVOLUTION 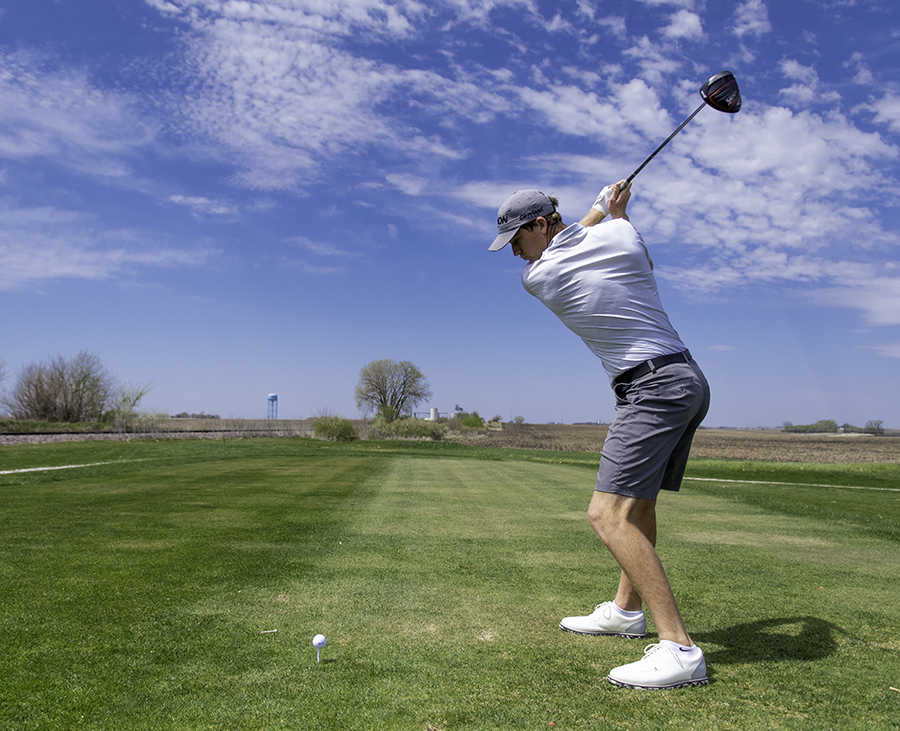 Trevor Ullestad, a 2014 South Hamilton graduate, prepares to tee off at the Jewell Golf and Country Club last week. A Class 2A state champion in high school and a two-time collegiate All-American, Ullestad is now a professional golfer with dreams of one day making it onto the PGA Tour. DFJ photo/Troy Banning

Trevor Ullestad grabs two golf balls out of his pocket and tosses them to the ground in the center of a fairway at the Jewell Golf and Country Club, the chunk of Earth where his love for the game of golf began so many years ago. He steps up to the first ball, adjusts his grip, takes one look at the green in the distance and lets it rip.

The sound at the point of contact is the first thing that’s different from the everyday golfer. It’s flush, pure, a thwack! that weekend duffers hear on the rarest of occasions if ever. The ball pierces the howling winds that are blowing straight in as it climbs toward its intended target.

Where the ball lands barely registers with Ullestad though. He quickly turns his focus to the second ball. Same set up, same pre-shot routine, same swing, same sound, same result.

He could do this four hours. He has, actually. Thousands of times over the years. You don’t become a prep state champion, a collegiate All-American, an Iowa Amateur winner and, now, a progressional player taking a run at the ultimate dream without putting in the work.

The coronavirus pandemic has brought Ullestad, a 2014 South Hamilton graduate, back to his hometown for the time being. The original plan was to head to Mackenzie Tour — PGA Tour Canada — Q-School in late March, earn his card and then spend his summer working towards advancing to the Korn Ferry Tour, which is one rung below the big show. 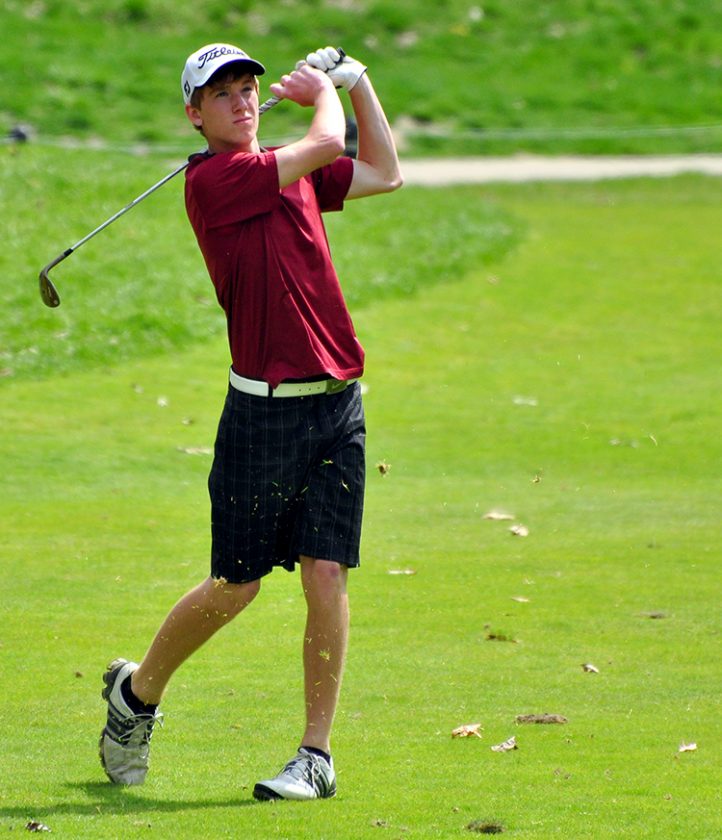 But what are you going to do? Ullestad just shrugs.

“It’s tough right now because everything is just shut down,” Ullestad, now 24 years old, said. “But being back home hasn’t been bad. I don’t get to see my family very much, so that’s been good, and I’ve been able to mentally rest a little bit.”

Coming back home gives him a chance to reflect too. How it all started, how it evolved and where it will hopefully take him one day.

Ullestad’s journey began as a member of the South Hamilton golf team. He reached the state tournament four times, won a Class 2A individual crown as a senior and led the Hawks to the 2014 team state championship. He sprinkled in Heart of Iowa Conference gold and more meet medalists honors than he can count.

But it wasn’t like he was a mechanic on the course. He golfed during the spring season and in his spare time during the summer. In the fall, he played football and earned all-state honors as a senior. In the winter, it was basketball, where he was a key member of South Hamilton’s 2014 2A state tournament team. His golf game even moved to the periphery in the summer because of — yep, you guessed it — baseball. 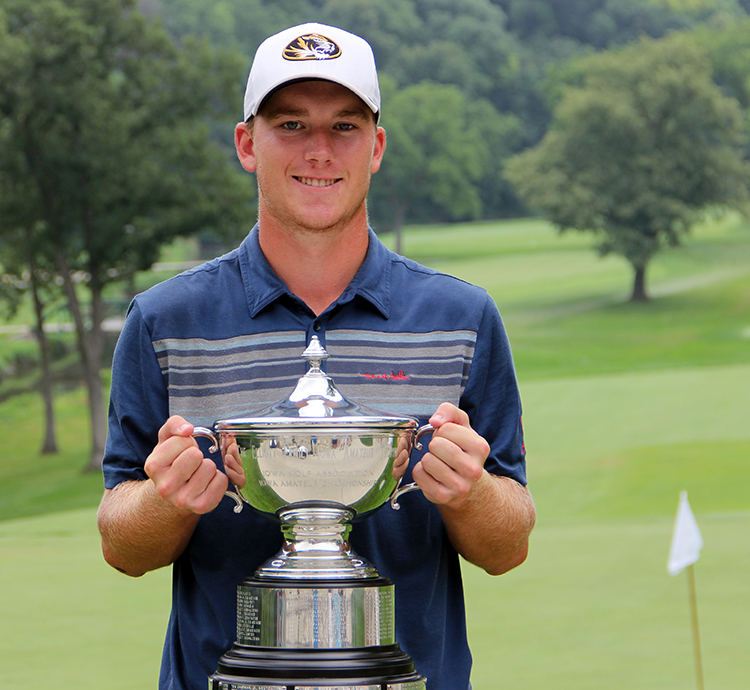 Trevor Ullestad poses with the trophy after he won the 115th Iowa Amateur in July of 2017 at Cedar Rapids Country Club. Submitted Photo

His passion for all sports growing up did become a detriment when it came time to think about college. There were no big-time Division I offers to play golf, no coaches lining up at his front door trying to sign him.

But that didn’t deter him.

“My dream in high school was to play at a big Division I school and compete against the best players,” Ullestad said. “But in high school, I really didn’t get my name out there. Other golfers don’t play other sports in high school. They just travel around the country and that’s how they get noticed.”

Indian Hills, a junior college in Ottumwa with one of the top NJCAA programs in the country, gave Ullestad a chance though and he jumped at the opportunity.

It turned out to be a perfect partnership. Ullestad placed 16th at the national tournament as a freshman in 2015 and helped the Warriors win the team crown, and a year later he vaulted all the way up to the third-ranked junior college player in the country and placed third at nationals.

“Over my two years there I got so much better,” Ullestad said. “That’s probably the two years that I developed the most. During my first winter there, I would hit into a net a lot and my coaches would look at my swing and help me. I got into better positions with my swing and was able to use my athleticism.”

Ullestad went from carrying the ball 270 yards off the tee to pushing it past 300 yards — his driver now sounds like a howitzer when he unloads from the tee box. His iron play rounded into shape. His short game became a strength.

And it all led to the University of Missouri and the chance to play Division I golf in the Southeastern Conference — the premier league on a yearly basis.

“I was really fortunate to go there,” he said. “I didn’t do anything special there and felt like I should have done better, but it gave me the confidence to know that I can compete with the best amateur players.

“My junior year at the SEC (tournament), I played a match against Cameron Champ, who’s now a two-time winner on the PGA Tour. He beat be 1-up, but I hung with him and felt like I could have beaten him.”

The biggest feather in Ullestad’s cap to date came in July of 2017 when he overcame a two-stroke deficit in the final round to claim the 115th Iowa Amateur at Cedar Rapids Country Club. Three rounds in the 60s (69-68-69) — the norm these days — pushed him to a two-stroke victory and, in some ways, put Jewell on the golf map.

“I always wanted to win that to show people that you can come from a small town like Jewell and succeed,” he said. “That summer I made a little tour out of it and played in some bigger tournaments right before that, so going in I felt like I had a good chance. That was really cool and gave me a lot of confidence going into my senior year (at Missouri).”

A year later, on a familiar track at the Tournament Club of Iowa in Polk City, Ullestad almost went back-to-back, but lost in a playoff to current Iowa State player and 2020 preseason All-American Tripp Kinney. That one still haunts Ullestad.

“I still think about that,” Ullestad said. “I felt like I didn’t even play that well and I missed a short putt to win it. It would have been cool to go back-to-back.”

That was one of the last amateur tournaments that Ullestad played in. By that time he had already made up his mind — it was time to take his shot at being a professional. It was a gamble, he knew, but being young and so, so talented, how could he not?

“I don’t want to have any regrets,” Ullestad said. “So I figured I’d give it a shot.”

Trevor Ullestad, a 2014 South Hamilton graduate, prepares to tee off at the Jewell Golf and Country Club last week. A Class 2A state champion in high school and a two-time collegiate All-American, Ullestad is now a professional golfer with dreams of one day making it onto the PGA Tour. DFJ photo/Troy Banning

Trevor Ullestad poses with the trophy after he won the 115th Iowa Amateur in July of 2017 at Cedar Rapids Country Club. Submitted Photo