IHSAA, IGHSAU set May 1 as target date to return 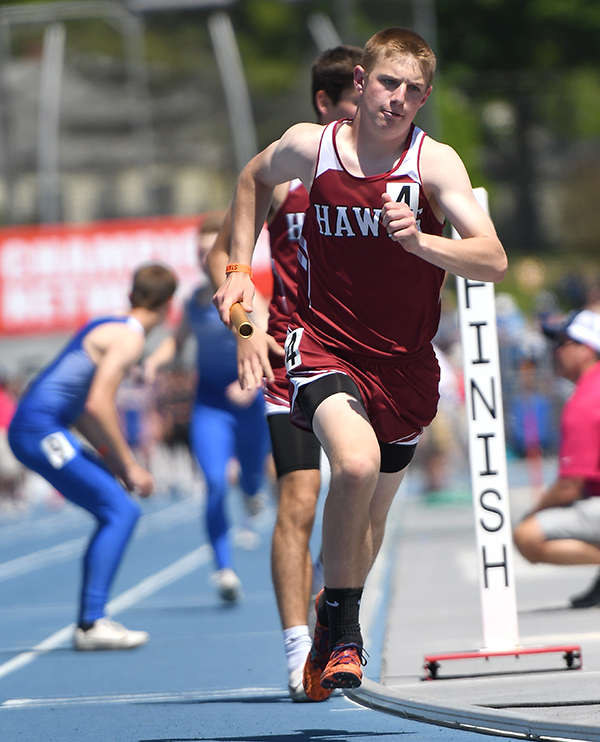 Quinton Grove takes off for the anchor leg of the Class 2A 4x800-meter relay at the 2019 state track and field meet. The South Hamilton senior hopes he’s able to complete his prep career at state, which has been rescheduled for early June. DFJ photo/Troy Banning

WEBSTER CITY — In the immortal words of Lloyd Christmas from “Dumb and Dumber” — So you’re saying there’s a chance.

The state’s two governing bodies for prep athletics released revised schedules for the spring season on Monday, as they continue to hold out hope that the meets, matches and tournaments will go on in spite of the coronavirus pandemic.

And just like that, the optimism has returned. It’s cautious optimism, sure, but optimism nonetheless.

“I would say I’m more optimistic now,” South Hamilton senior track and field athlete Quinton Grove said. “It’s good to know they’re trying, that they’re doing all they can to make it happen. My hope kind of dipped for a while, but I definitely feel better now knowing they’ve moved (the season) back and are trying to make stuff happen.”

All of the state meets and tournaments will be pushed back into June.

The IHSAA and IGHSAU have not announced how a pushed back and condensed spring season would alter the summer landscape for baseball and softball. Both of those sports would likely have their start dates pushed back as well.

All of this is subject to change, of course. There are no guarantees that schools will be allowed to reopen following Governor Kim Reynolds’ recommendation that they remain closed through the end of April.

Still, Grove says he’ll keep an open mind as he ramps up his training over the next few weeks. The middle and long distance runner now has a target date and he intends to be ready if he’s allowed to throw on the South Hamilton uniform again.

“I’ve been running to keep myself in shape, but I haven’t been training super hard,” he said. “I’ll start picking everything up again knowing there’s a chance we could still be running.”

Grove ran the anchor leg on the Hawks’ Class 2A state championship 4×800-meter relay a season ago, and he’s the only member of the quartet back in the fold this spring. Logan Peters, Conner Hill and Cole Berg all graduated a year ago.

Grove continues to hold fond memories of that achievement and he knows they’ll stay with him forever.

“Looking back now and with everything going on, it’s really exciting to think that we actually did that,” he said. “It feels like a really good accomplishment.”

Grove also plays baseball and he’s accepted the fact that his final chance to compete for South Hamilton will likely be altered as well. But he says it won’t be much different than past years when the sports overlapped. Now it will just be in June instead of May.

“No matter what happens, there’s going to be overlap,” he said. “It will be nothing new.”