Only best of the best recognized by the league coaches 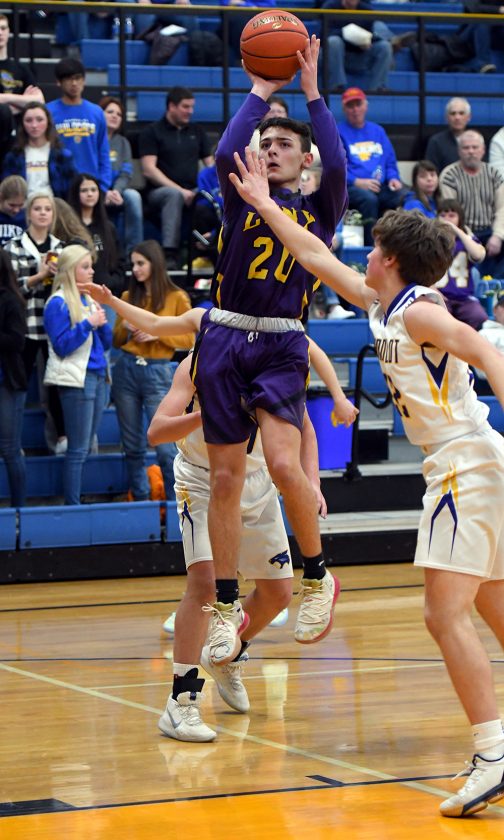 WEBSTER CITY — Participation ribbons aren’t given out in the North Central Conference. If players want to receive all-conference accolades, they have to earn them.

With just 18 spots available — six on each of the first, second and third teams with no honorable mention — on the all-conference squads, it’s nearly impossible for coaches to get everything they want, but McKinney says that’s OK.

“I really like how our conference does all-conference,” he said. “I think it should be an honor that you have to earn an all-conference spot. You want as many kids to get it as you can, but at the same time it has to be something that is earned. And you have to have the respect of all of the other coaches.”

Webster City picked up two of the coveted positions for junior guards Tyler Olson and Tavis Eklund. Olson was named to the second team, while Eklund was placed on the third team. 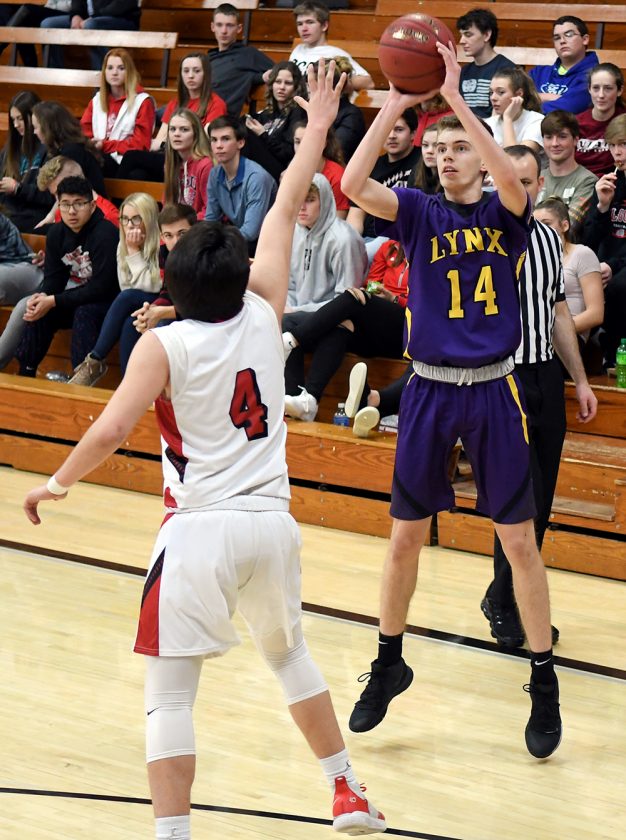 WCHS junior Tavis Eklund (14) puts up a 3-pointer from the wing against CGD in Clarion during a February game. Eklund drained 50 3s on the campaign, which helped him earn third-team all-NCC honors from the league coaches. DFJ photo/Troy Banning

“There were a lot of really good basketball players in our conference this year,” McKinney said. “We knew going in it was going to be really tough to have a first-team guy. Clear Lake had three that deserved to be there, then you had Algona with their returning kids, and then Sharar and what he did.”

Olson, an all-state athlete on the football field and baseball diamond, was Webster City’s leading scorer at 12.6 points an outing, but his contributions were more vast than the obvious. He also led the team in rebounding and steals, was second in assists, and was arguably the top defender.

“Tyler’s a great all-around athlete and he does so many things for us,” McKinney said.

Eklund, who averaged 10.7 points and 3.4 rebounds per game, was primarily known for his outside shooting. His 50 3-point baskets ranked sixth in the league and his 47.6 percent success rate from beyond the arc was tops among conference players who registered more than 15 attempts.

“Tavis was definitely one of the better shooters in the conference,” McKinney said. “We didn’t have a whole lot of guys that are known as knockdown shooters, but he was a guy that could really do it.”

McKinney is encouraged that both players will return to the fold next season and he says both have the chance to be even better as seniors if they continue to expand their arsenals.

“We’ll have two all-conference players back, but they know they’ve got to get better,” McKinney said. “Tavis is not going to get the clean looks like that next year, so he’s got to be able to create off the dribble. Tyler knocked down some shots for us, but he’s got to be able to step out and make some more shots.

“Mostly, next year we’re going to look to those guys for leadership. Tyler will be a three-year starter, and Tavis played as a sophomore and started this year. The great thing is those two work really hard.”

Nine of the 18 all-conference players, including three of the six first-team members, will return to the court next winter.

WCHS junior Tavis Eklund (14) puts up a 3-pointer from the wing against CGD in Clarion during a February game. Eklund drained 50 3s on the campaign, which helped him earn third-team all-NCC honors from the league coaches. DFJ photo/Troy Banning