Flaws sisters, Nerland have a bond that runs deeper than sports

From Webster City to Grand View University, they’ve been teammates and friends for years 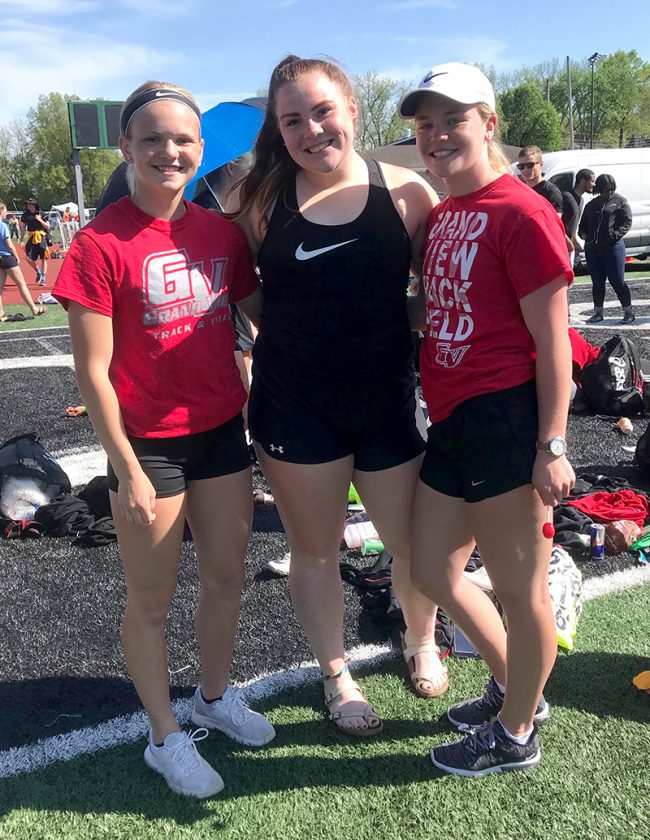 (Left to right) Haley Flaws, Cassidy Nerland and Allie Flaws pose together. They were once teammates at Webster City and then joined forces again as members of the Grand View University women’s track and field team. Submitted photo

On the track or in the ring, their eyes haven’t changed over the years. They still burn with intensity, the type of singular focus on success that brought them to this point in their athletic careers.

Outside of the competitive arena, that’s where you find a stark difference. There’s love for each other in those eyes, a bond formed over years of being teammates. In pictures, you can see the genuine affection through the smiles and closeness.

It’s been quite a journey, one they all agree has been special.

Allie and Haley Flaws, together with Cassidy Nerland, began their track and field careers in the purple and gold at Webster City, and their achievements under the Lynx umbrella speak for themselves. 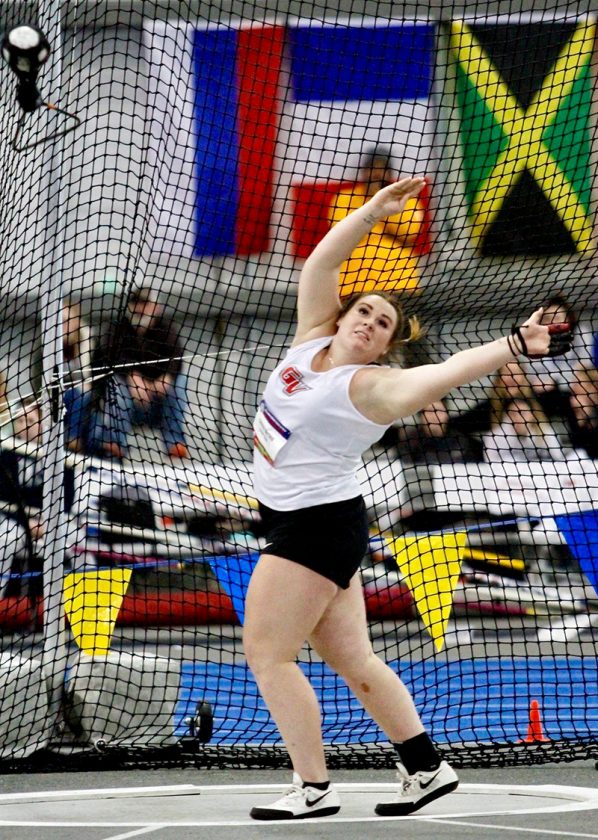 That’s a good enough story right there, one they could tell their children about sometime down the road. But all three took their talents to Des Moines and Grand View University where they’ve continued to be teammates. The school colors changed — they now prefer the red and black of the Vikings — but the friendship has never waned. In fact, it’s become even stronger.

“It’s nice to have them because they’re my best friends on the team,” Allie Flaws, the mother of the group and a soon-to-be college graduate, said. “It’s just cool for me to see how much they’ve grown.”

Haley Flaws and Nerland, both sophomores, graduated high school together. They went to college together and now they share a dorm room. But every Monday night throughout the school year, they headed to Allie’s apartment for a night off from the pressures of the classroom and their chosen sport.

“It made it so much easier to have her here,” Nerland said of Haley. “We do pretty much everything together and then Allie always helps us too. We’ve gotten a lot closer since we’ve been in college together.”

“I’m usually not the person that goes up to people and talks, so having them has helped me get out of my shell,” Haley Flaws said. “Cassidy and I are always with each other, and Allie and Cassidy have grown closer too, so that’s awesome.” 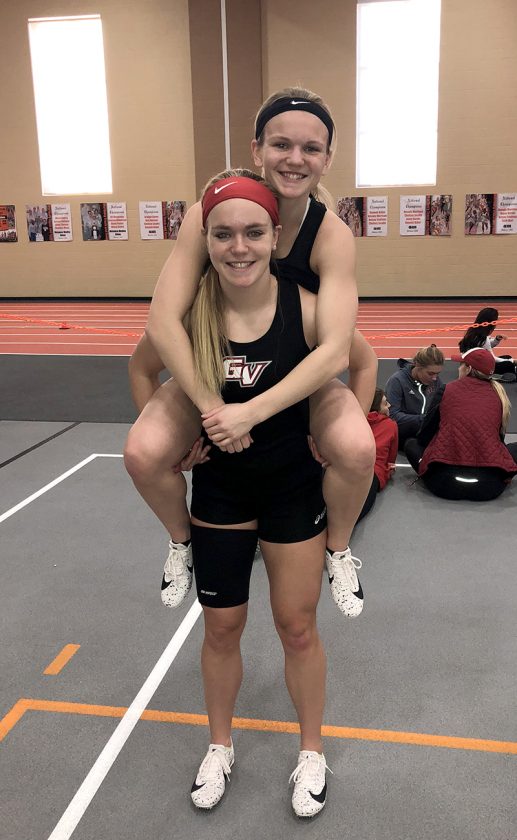 Has that connection helped the WCHS graduates thrive at the next level? Haley Flaws and Nerland certainly moved in that direction during the most recent indoor season.

Already a standout in the throws, Nerland took another step forward by placing third at the American Athletic Conference Championships in the weight throw, which pushed her through to nationals where she finished 14th at the NAIA Women’s Indoor. In January, Nerland also won the shot put title at the Grand View Open and captured silver in the weight throw.

And if you watched Nerland in high school, none of this should come as a shock.

“She’s one of the hardest working people I know,” Haley Flaws said of Nerland. “She sets goals for herself and always smashes them.”

In some ways, this is Nerland’s job. Yes, she and Haley Flaws are both elementary education majors and that’s the priority, but competing at the collegiate level comes a close second. 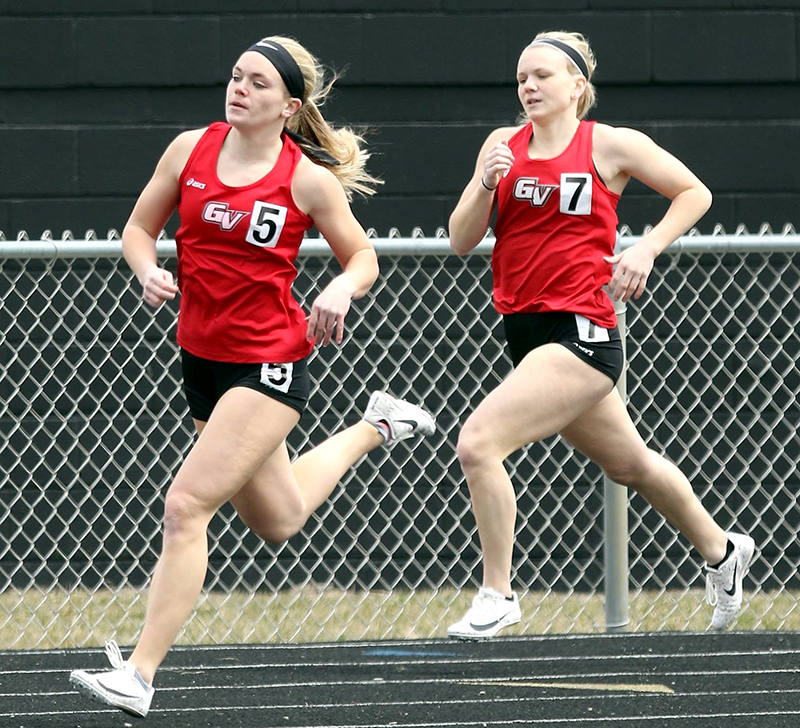 “Being a four-sport athlete in high school, I was always doing stuff, so being busy isn’t that bad,” Nerland said. “But everything is way more technical now. It’s been really strenuous, even on the mind, and at times it’s almost overwhelming because you’re focusing on different things.”

For Haley Flaws, the indoor season that ended earlier this month was a rebirth in some ways. She’s always been fast and she’s always been consistent, but for whatever reason she took her talent to another level over the past few months.

“I never expected to run those times, it just kind of happened,” Haley Flaws said. “In the summer before my sophomore year, I didn’t think I worked very hard and then I realized that I wasn’t going to do well if I didn’t work harder. So I went to the coaches and talked about helping me with my technique, and I stayed late at practices to get the work in. It really paid off.”

Being the older sister, Allie Flaws always held the upper hand over her sister in the sprints. But watching Haley burn up the track this winter forced Allie to accept the fact that she’s no longer the fastest Flaws. She’s fine with it too. 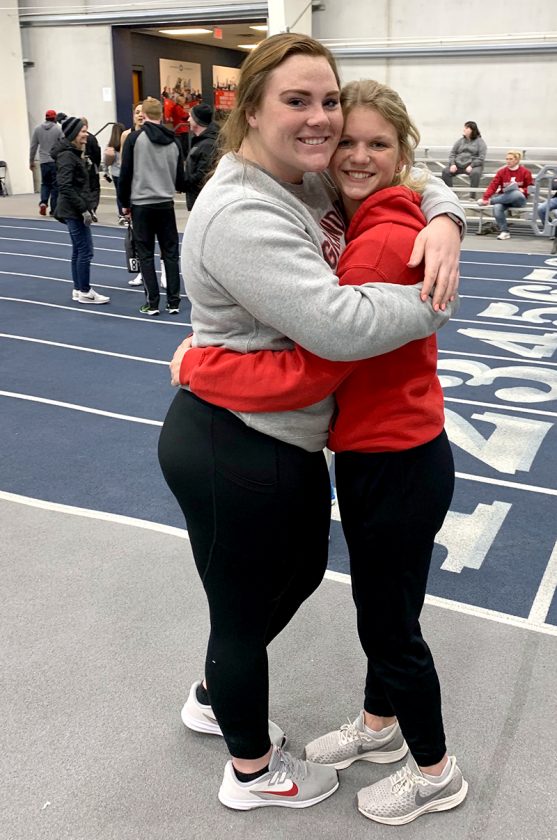 “This year she went absolutely crazy and I’m so happy for her,” Allie Flaws said. “She’s completely passed all of my times now and she’s faster than me for sure, but I think that’s cool. I cried for her, I was so happy to see her succeed.”

Said Nerland: “(Haley) wanted to be as good as Allie when she first (got to college) and her time drops have been drastic. To see how hard she’s worked … she loves track and she wants to be the best. She’s always had that motivation to be the best.”

Allie Flaws’ decorated career didn’t end the way she had hoped. A torn hamstring during her junior season forced her to shift gears. Gone were the sprints, and in their place were more 800s, a distance that wasn’t exactly familiar.

“My hamstring was nowhere near ready to sprint and that kind of bothered me,” Allie Flaws said. “I did more 800s to help the team out, but it was really frustrating because I’m obviously not the best at that.”

All three were preparing for the outdoor season. Practice was a week old when COVID-19 dropped the hammer on the season and, in some ways, the school year. They’ll finish the semester with online classes, and Allie Flaws’ April 25th graduation ceremony has been canceled.

“I cried when I found out track was done because it’s been a huge part of my life for so long,” Allie Flaws, who will graduate with a nursing degree, said. “Now it’s just over and my parents will never get to see me run again and I’ll never get to run with Haley again.

“Graduation canceled isn’t a huge deal in the grand scheme of things, but it does stink. I was really looking forward to it.”

Allie Flaws still has to take her boards, but she already has a job lined up on the surgical floor at Mary Greeley Hospital in Ames.

Nerland and Haley Flaws, meanwhile, are now in wait and see mode. They’re back home for now, doing what they can to stay in shape, both mentally and physically. Their collegiate track and field careers are only at the midpoint.

“It’s almost like a sports injury in that (the outdoor season) got taken away without us knowing it was going to happen,” Nerland said.

Whenever they are allowed to return to campus, Nerland and Haley Flaws will continue to live together and support one another. They’ll still head to Allie Flaws’ apartment from time to time as well.

That bond that began in Webster City and moved to Des Moines is simply too strong to break. Ever.

(Left to right) Haley Flaws, Cassidy Nerland and Allie Flaws pose together. They were once teammates at Webster City and then joined forces again as members of the Grand View University women’s track and field team. Submitted photo