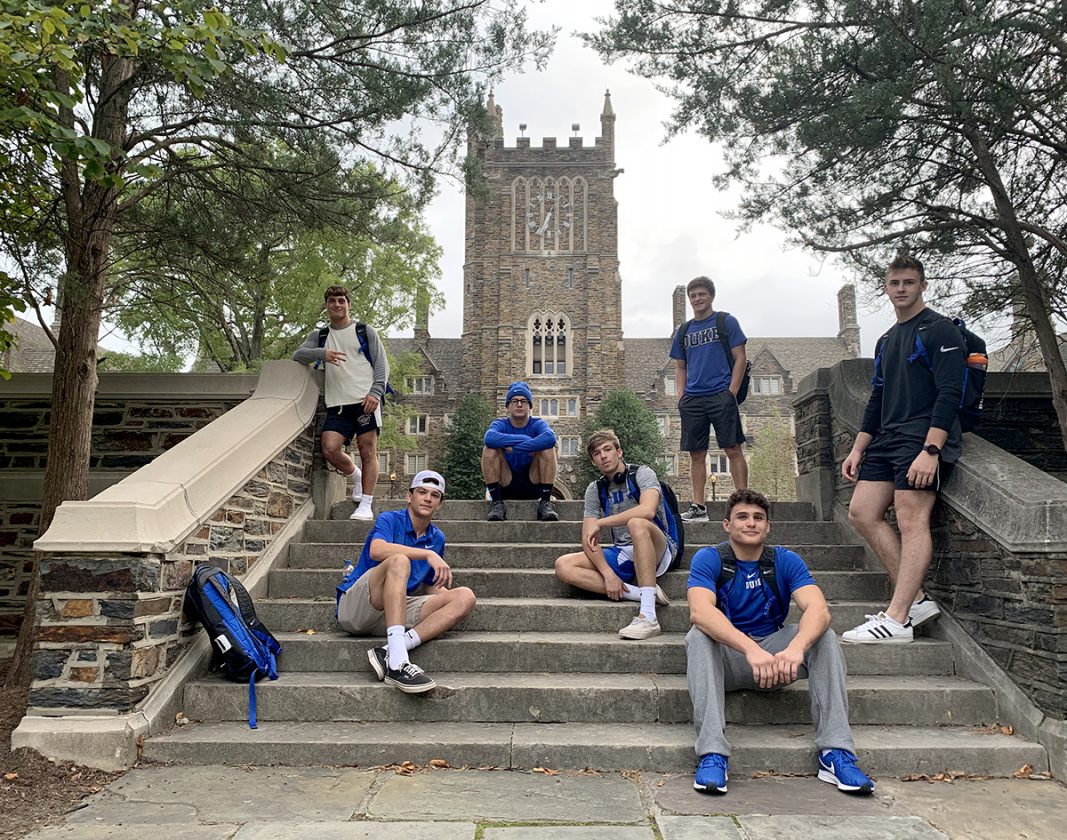 Growing up in Webster City, winning always came easy to Drake Doolittle. Whether it was on the wrestling mat or in the classroom, he was simply better than his peers.

Big fish, little pond. You get the idea.

Don’t get the wrong idea though. Doolittle learned the meanings of words like dedication and sacrifice at an early age. Very few kids worked harder, and even fewer were as grounded while the adulations fell at his feet.

But all of that has changed now. He’s now that little fish, and the pond has morphed into an ocean. Even swimming in a straight line has become a chore.

Has it been challenging? You bet. Has he loved every minute of it? You bet again. 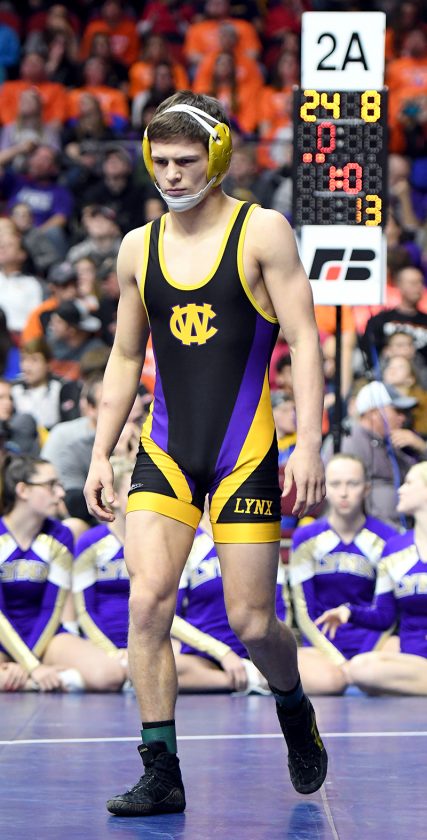 Back home now after an abbreviated freshman year at Duke University due to the coronavirus, Doolittle is not the same kid he was when he said goodbye to the family farm and made the 1,126-mile pilgrimage to Durham, North Carolina, last fall. Oh, he’s still soft-spoken and he’s still humble, maybe even more so than when he left.

That’s what taking some heavy lumps will do to a wrestler.

“The losing was very humbling, but it also makes the wins mean that much more,” Doolittle, who wrestled unattached at 125 and 133 pounds this past winter, said. “A win in college is much more hard-fought, so it means more than maybe a high school match too.”

Doolittle won a lot — a school-record 175 times to be exact — in a Lynx singlet. Outside of three-time state champion Bart Chelesvig, no grappler has left a greater imprint in the long history of the WCHS program.

Doolittle was a Class 2A state champion at 120 pounds as a senior in 2019, but that was just the final chapter in a long and detailed book. He’s the Lynx only four-time North Central Conference champion, one of just two WCHS grapplers to win four state medals, and he holds career records for wins, pins (114), takedowns (533) and team points scored (1,190). 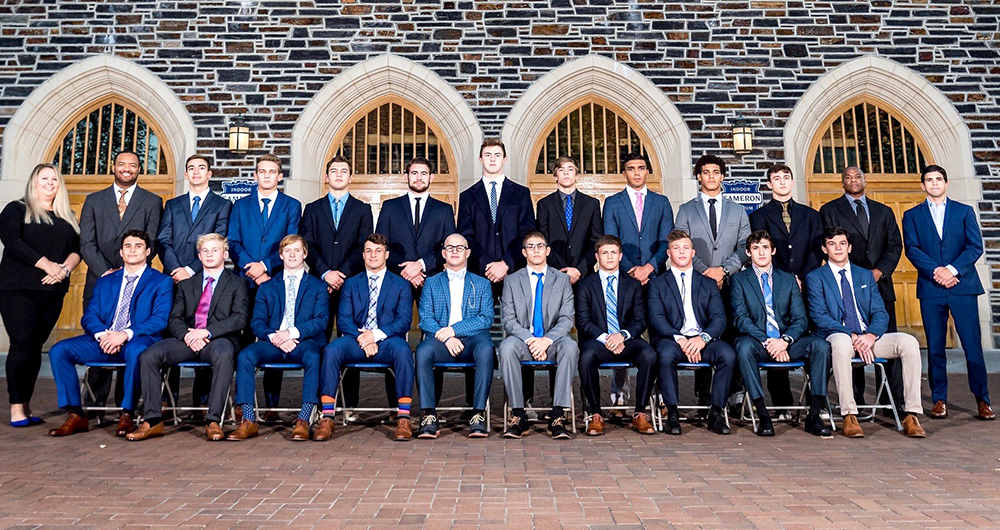 And, oh by the way, he was also a 4.0 student. Add it all up and it’s not hard to see why one of the nation’s most acclaimed institutes for higher learning came calling.

“Going to school at Duke is awesome,” Doolittle, who is undecided on a major, said. “You can’t think of a better school to go to. The way they present the material in class and just the professors in general, you’re provided with every necessary thing that you would need to be successful in life.”

Doolittle says the transition has also been aided by his wrestling family.

“The team aspect of college wrestling always helps with integrating the younger guys,” he said. “Having those older guys around has helped a lot.”

Competing on the wrestling mat at the collegiate level hasn’t been easy though. What came naturally in high school — the takedowns, the turns, the pins, the utter dominance — has been anything but at the next level. 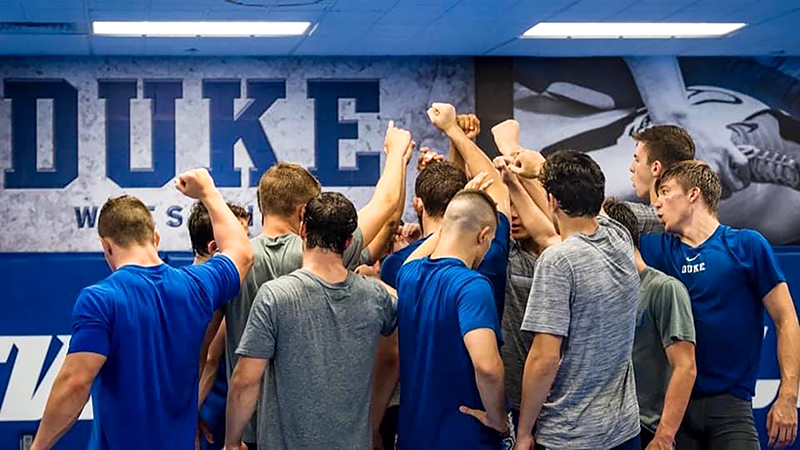 Still, Doolittle knows he’s grown on the mat and he’s had his fair share of success. He placed sixth at 125 at the Battle of the Citadel in early November, and followed it up with a runner-up performance at the Mountaineer Invitational.

“I would say I’ve grown exponentially just being in a college wrestling room in general,” Doolittle, who took a redshirt season this winter, said. “In the college realm of things, you notice a lot of your setbacks more and they’re exposed. One thing I really had to work on was the bottom position. In high school, I never really had to worry about it, but that’s something I had to address right away.

“In college, it’s a battle every time you step on the mat. Falls don’t come nearly as often, so you’ve got to be ready to wrestle a full match and do whatever it takes.”

It hasn’t been all work and no play though. He’s been able to enjoy the college life, things like a basketball game inside famed Cameron Indoor Stadium. Personality wise though, Doolittle doesn’t exactly fit the mold of a member of the ‘Cameron Crazies.’

“I’ve been there a couple times and it was awesome,” he said. “As athletes, we usually get special wrist bands and get to be in the first couple of rows. But the first game I went to was right before Christmas break and it was the first loss, so I might be a little bit of bad luck.”

Doolittle also says he was able to keep up with the happenings back home. He followed Cam Phetxoumphone’s journey towards a 106-pound state title for WCHS in February and it didn’t surprise him one bit.

“I was able to watch his finals match on my computer in my dorm room, and I thought he wrestled tough. He went out there and put on a show,” Doolittle said of Phetxoumphone, who knocked off Greene County’s McKinley Robbins in the finals, 5-0, to cap a 42-0 season. “I’ve seen him wrestle in the room and I know how hard he works. It wasn’t a matter of if, it was a matter of when.”

With his first collegiate wrestling season now behind him, Doolittle will spend the next month finishing up his classroom work online, and he’ll continue to train at home as he sets his sights on next season.

He knows he has a lot of room for improvement and he also knows it will continue to be a daily grind, but that’s the way he likes it.

“It’s been a huge jump and this is a time where I needed to grow a lot,” he said. “It’s been halted a little bit, but you’ve got to be optimistic and look at the positives of what I’ve been able to do so far.

“The goal is to be in the lineup next year. I should be at 125, but we’ll see how much I grow over the summer.”