Swenson and Thompson champs, Willis also advances to 1A districts

OGDEN — It was a coin flip for Colton Willis — 220 or 285 pounds? — right up until just moments before weigh-ins at Saturday’s Class 1A sectional wrestling tournament.

But one absence made the decision easy.

Despite weighing around 215 pounds, Willis, a South Hamilton junior, was prepared to compete at heavyweight. But when ninth-ranked 220-pounder Cole Anthony of Pleasantville didn’t weigh in, South Hamilton head coach Dan Brodie quickly called an audible.

“Some things opened up at 220 and when that happened we just figured Colton had a better chance at 220,” Brodie said.

Willis navigated his way through the sectional with a second-place finish and he was one of three South Hamilton grapplers to qualify for the district tournament this weekend at Pleasantville.

Eighth-ranked Lane Swenson (170) and Trevor Thompson (195) cruised to sectional crowns, as they led South Hamilton to a fifth-place finish in the team standings with 142 points. Colfax-Mingo (209) and Martensdale St. Marys (182) held down the top two spots and advanced to regional duals.

After rolling to a 15-0 technical fall win in the semifinals, Willis dropped a championship-round bout to third-ranked Blake Haub of Ogden. But in the wrestleback, Willis wasted no time in decking Martensdale St. Marys Dylan Morgan in 36 seconds to punch his district ticket.

“(The three district qualifiers) had it on straight and wrestled really well,” Brodie said. “They put themselves in good position for districts.”

Swenson spent a grand total of 1 minute, 18 seconds on the mat. He pinned Pleasantville’s Michael McGriff in 18 seconds and then needed just one minute to dispose of Ogden’s Justus Rude in the finals.

Thompson had just 57 seconds of mat time — that coming in a quick dusting of Ogden’s Tyler Kathman in the semifinals. Pleasantville’s Alex Swenson injury defaulted out of the gold-medal bout.

“It was just business as usual for (Swenson and Thompson),” Brodie said. “Trevor was kind of upset because he wanted to wrestle (in the finals) bad, but he’s locked in.” 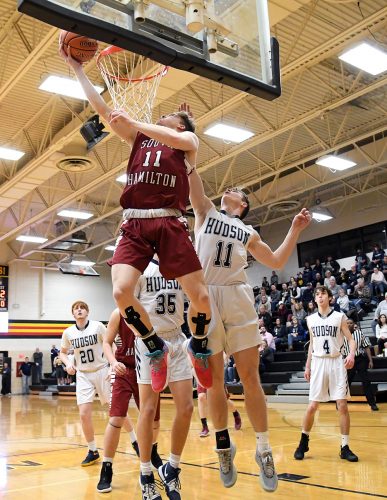