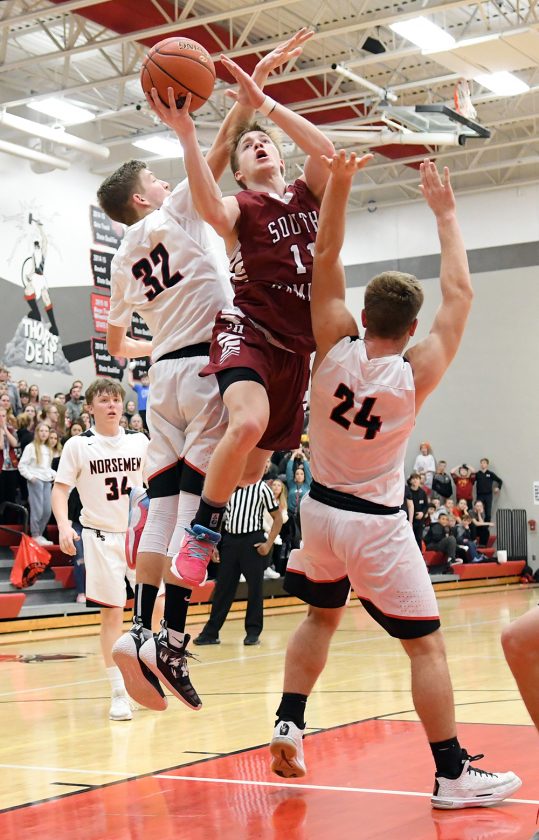 South Hamilton’s Doran Lutjen (center) scores and is fouled on a drive to the bucket, a field goal that snapped a drought of 5:40 in the fourth quarter against Roland-Story on Friday in Story City. DFJ photo/Troy Banning

STORY CITY — Win by 50 or lose by 100 Friday night, it didn’t matter one bit in terms of South Hamilton’s place in the final Heart of Iowa Conference standings.

But with the postseason set to start tonight, the Hawks wanted — maybe even needed — a boost of momentum, and what better way to grab that than with a win over longtime rival Roland-Story?

Yeah, that didn’t work out so well.

“There were times where we were good, but at the same time it wasn’t the same team that took the floor (in a blowout win over Nevada) Tuesday night,” South Hamilton head coach Matt Juber said. “What’s the reason? I don’t know and I’ve got to figure that out. There were just spurts where we didn’t bring it like I know we can, so I’ve got to get them going.” 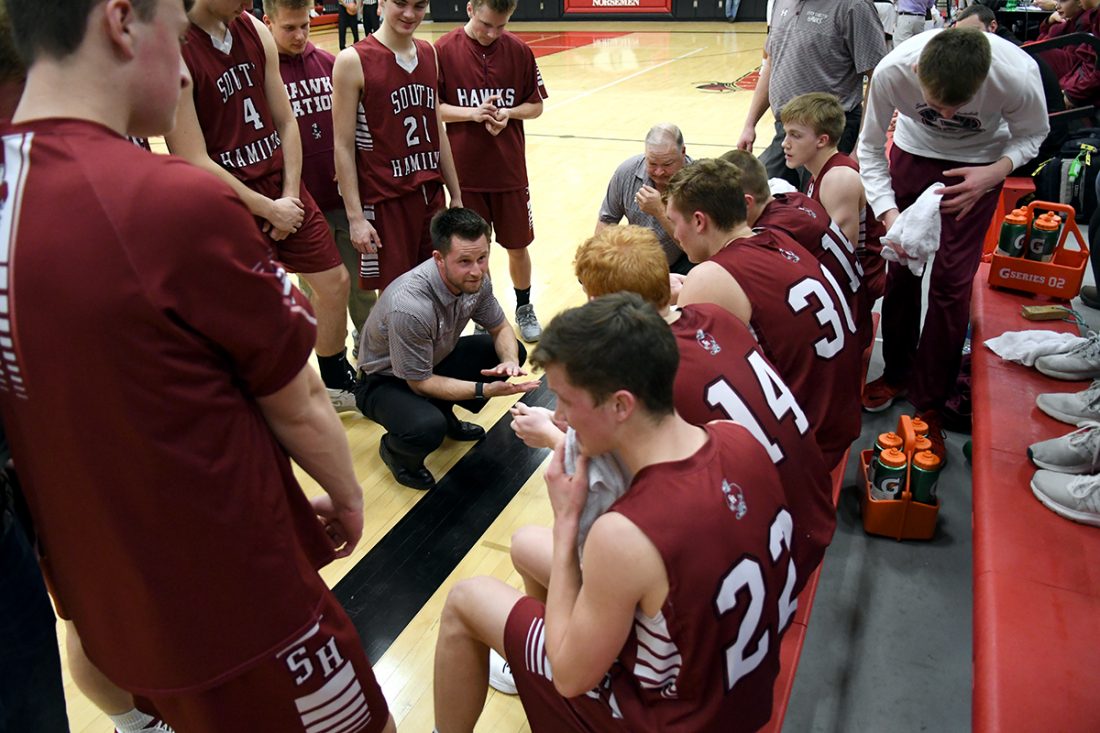 South Hamilton (12-7, 10-4 HOIC), which had second place in the HOIC wrapped up before tip-off, made just two shots from the floor over the final 11 minutes, 40 seconds of play, both of them by Doran Lutjen. The senior guard actually had all of the team’s field goals — a grand total of three — in the fourth quarter and overtime.

The Hawks went scoreless for 5:40 of the fourth period, a drought that was finally broken on a Lutjen drive to the bucket that gave South Hamilton a 33-32 lead with two minutes showing on the clock. It was another 5:51 before the next shot fell, that coming on a Lutjen offensive rebound and put back.

Roland-Story (14-7, 9-5 HOIC) packed it in with a zone and made it difficult for post players Cade Balvanz and Austin Busch to get touches. The Hawks struggled mightily on the perimeter — they shot just 19 percent from behind the arc (4 of 21) and 30 percent overall (15 of 50) — and were never able to force the Norsemen out of the bunched-in defense.

“Roland-Story did a good job of taking away our strengths on the inside,” Juber said. “They played a style that dared our guards to make shots and we didn’t hit some shots that we normally hit.” 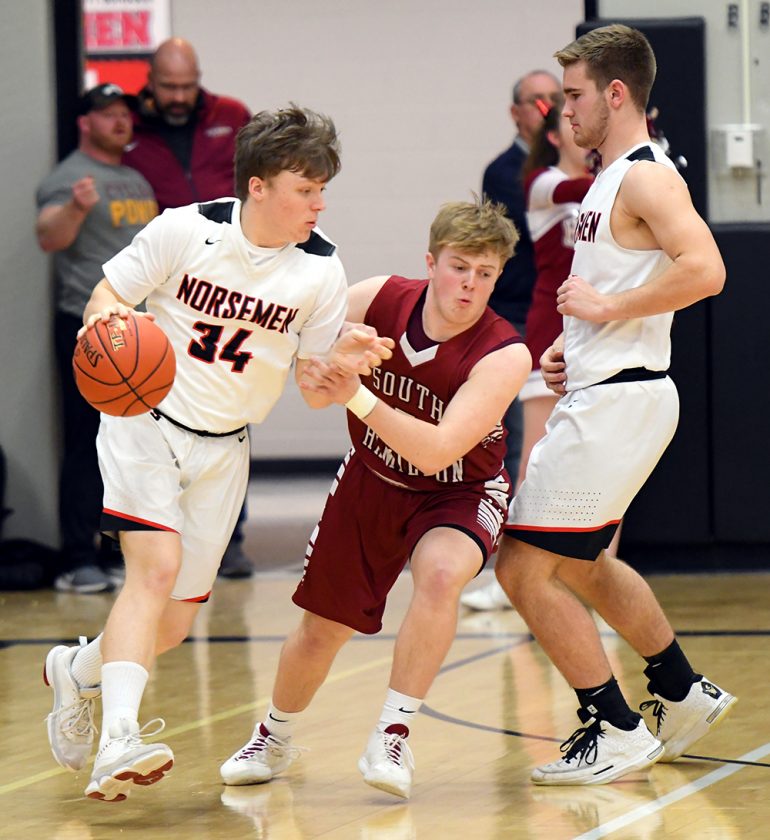 Even with the offensive lapses, the Hawks had chances at the end of regulation to seal the game, but they missed three free throws in the closing two minutes.

“We had our chances … we had the lead with the ball and free throws, but closing out games has been our Achille’s heel at times this year,” Juber said. “But we’ll keep working on it.”

Grove drained a pair of free throws to put South Hamilton in front, 39-37, with 2:34 remaining in overtime, but Roland-Story answered with a 7-0 run. Dylan Ihle buried a 3-pointer from well beyond the arc on the left wing, and on the next possession grabbed his own free throw miss and hit a short jumper to extend his team’s lead to 42-39 with 1:16 left.

Sam Skaar and Ihle combined to drain five 3s, as they led the Norsemen with 13 and 12 points, respectively. 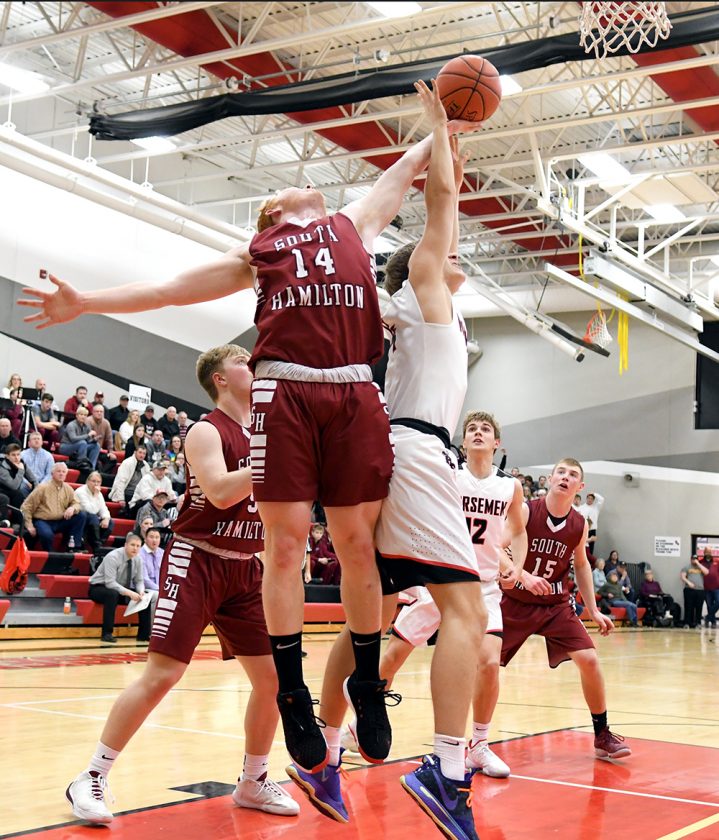 “Between Ihle and Skaar, both of them can shoot and the guys knew they’ve got range extended well beyond the 3-point line,” Juber said. “We didn’t quite guard with the urgency that we needed to.”

Roland-Story had two chances to put the game on ice in the closing 45 seconds, but missed the front end of a 1-and-1 both times. South Hamilton couldn’t take advantage though, as it missed a short jumper and then had back-to-back turnovers. Nolan Faber finally connected on a pair of free throws for the Norsemen that made it a two-possession game with 17 ticks left.

It will be a quick turnaround for South Hamilton, as it will host a Class 2A District 14 quarterfinal against Union (4-17) this evening at 7 p.m. The winner will advance to Thursday’s district semifinal against South Hardin (14-6) in Parkersburg. 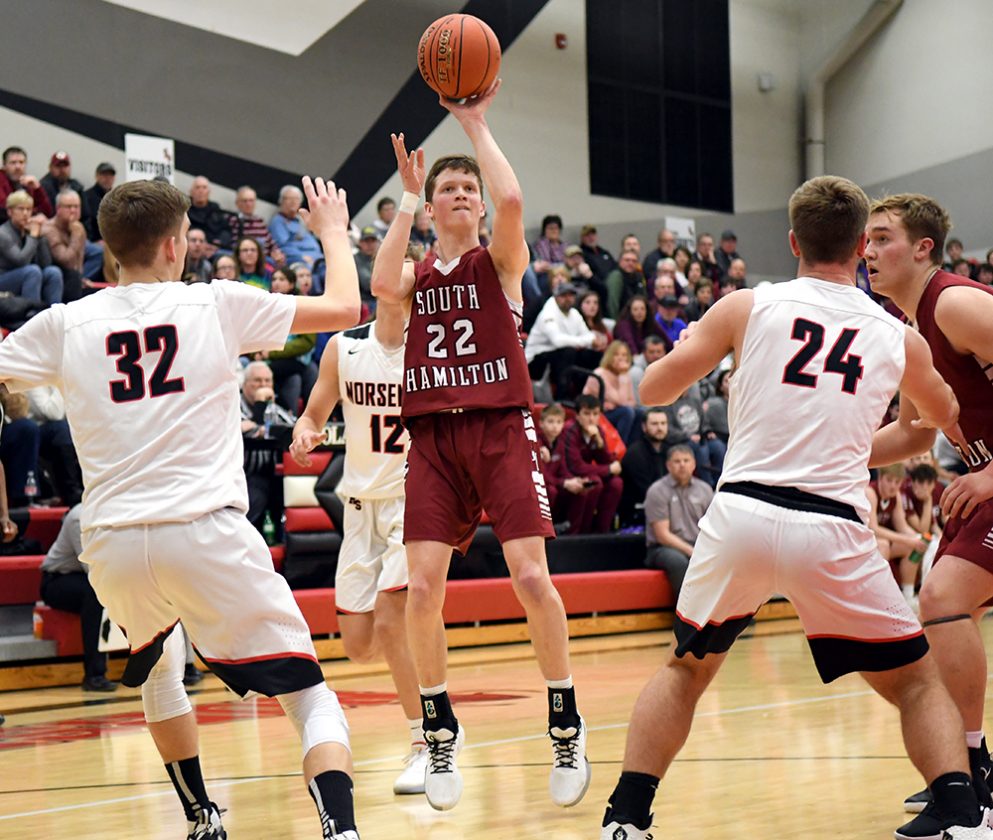 South Hamilton’s Doran Lutjen (center) scores and is fouled on a drive to the bucket, a field goal that snapped a drought of 5:40 in the fourth quarter against Roland-Story on Friday in Story City. DFJ photo/Troy Banning 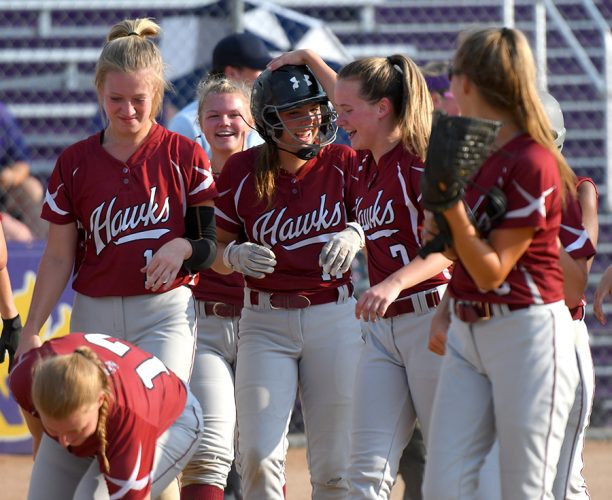