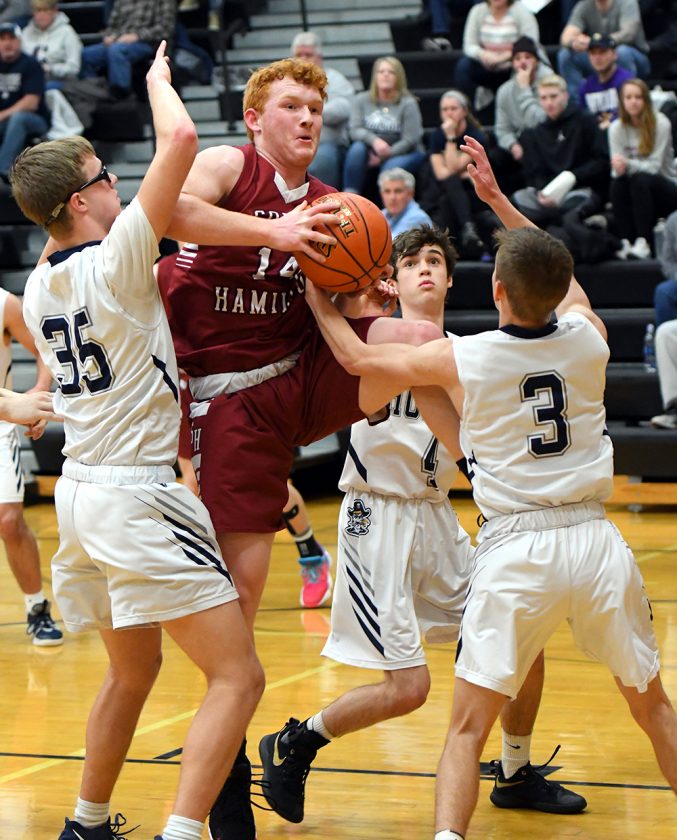 South Hamilton sophomore forward Austin Busch (14) attracts a crowd as he attacks the basket during Tuesday’s Class 2A District 14 Final against Hudson in Iowa Falls. The Hawks will meet Pella Christian on Saturday in Marshalltown for the right to advance to the state tournament. DFJ photo/Troy Banning

JEWELL — If you believe in curses, then South Hamilton will face two difficult opponents on Saturday when it attempts to qualify for the Class 2A boys’ state basketball tournament for a fourth consecutive season.

Pella Christian (12-10) is a no-brainer. Don’t be fooled by the Eagles’ record, folks. Truth be told, there may not be a better team in the class.

But Pella Christian really hasn’t posed any harm to South Hamilton in recent memory. The site of the Substate 7 final, which will tip-off at 7 p.m., now that’s another story.

The Roundhouse. The two words drip with venom when they leave the mouth of a South Hamilton fan.

The well-known relic in Marshalltown is spacious and charming. However, it’s also been the site of several South Hamilton demises. 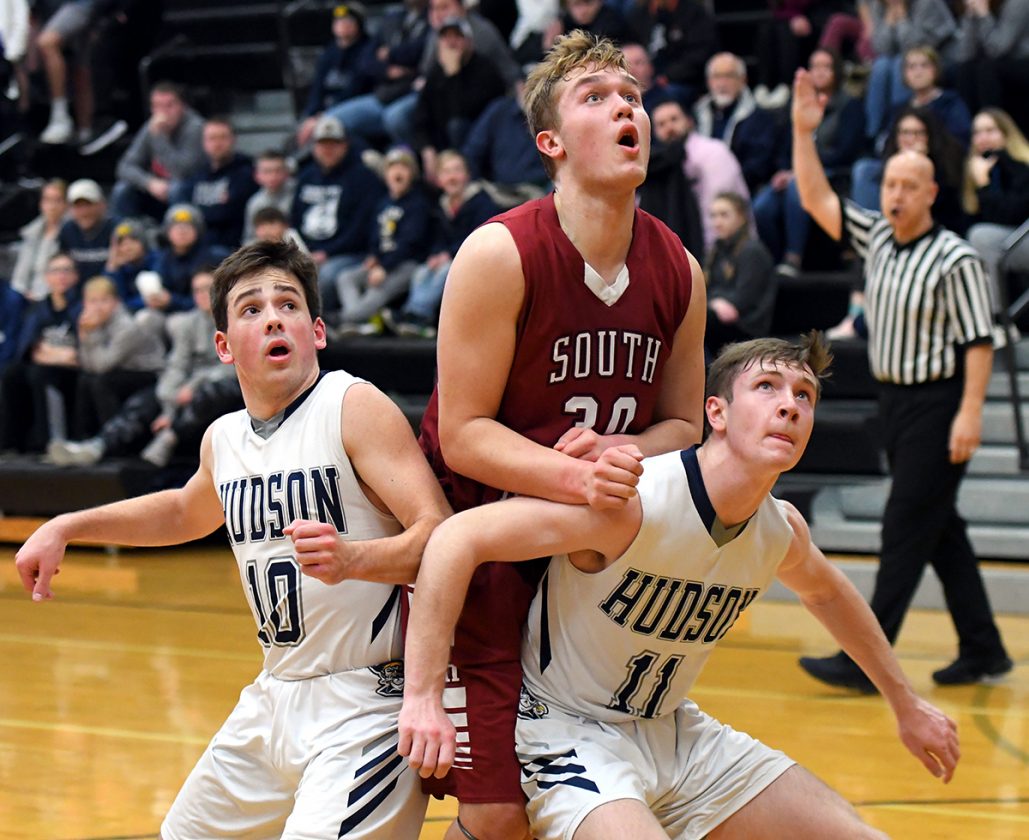 There’s 2001 when the Hawks entered substate ranked No. 1 and unbeaten … and lost on a near half-court buzzer beater inside the Roundhouse.

South Hamilton head coach Matt Juber was in elementary school when that devastation hit the program he’d eventually lead, and yet he heard about it long before the school was even on his radar. He went to high school at Sibley-Ocheyedan and played basketball under Bill Mueller, the Hawks’ head coach back in 2001.

“I’ve been told stories by Bill Mueller on some heartbreak there,” Juber said. “I know the odds are stacked against us when we go to the Roundhouse.”

Then there’s 2016, another substate and the last time the Hawks failed to reach state. South Hamilton wasn’t the favorite, but the loss to Dike-New Hartford inside the Roundhouse still stung.

In reality though, Juber isn’t really concerned about the venue. He’s got more than enough on his plate trying to come up with a game plan to knock off a Pella Christian team that is equal parts talented and huge. Like, really huge.

Six-foot-9 senior center Josh Van Gorp is the Eagles’ catalyst at 16.5 points and 10.3 rebounds per game. Six-foot-7 senior forward Isaiah Gritters is also in the mix. Heck, even their perimeter players — 6-2 Dan Jungling, 6-2 Jack Vermeer and 6-3 Keean Cadwell — tower over the Hawks. Jungling is second on the team in scoring (12.9 points per game) with a team-high 55 3-point buckets, while Vermeer (9.7 ppg) and Cadwell (9.0 ppg) have both rained in 31 3s.

Ah, now we come to the crux of this difficult task that South Hamilton faces.

Pella Christian owns the No. 1-ranked schedule in 2A. A member of the Little Hawkeye Conference, the Eagles routinely play 3A and 4A competition and thrive. They have wins over top-ranked (3A) Norwalk, sixth-ranked (3A) Pella and defending state champion (3A) Oskaloosa. The only ranked team on Pella Christian’s schedule it didn’t beat was No. 9 (4A) Indianola, which won both regular season match-ups.

It sounds like South Hamilton is a massive underdog and it is, according to the BC Moore computer. It lists Pella Christian as a 13.5-point favorite.

But don’t expect the Hawks (15-7) to simply hand the state qualifier banner to the Eagles. In the substate for a fifth consecutive season, South Hamilton knows what it takes to compete at this level. Senior leaders Cade Balvanz (13.8 ppg) and Quinton Grove (9.6 ppg) were starters on last season’s state team that placed third, and classmate Doran Lutjen (12.0 ppg) served as that team’s sixth man.

The Hawks are coming off arguably their finest half of basketball as well during Tuesday’s 44-25 rout of Hudson in the district final. They were methodical and precise during a first half in which they built a 32-14 lead, and it will take the same type of performance to hang with Pella Christian.

“We have to dictate how the game is played on both ends of the floor,” Juber said. “We have to utilize our quickness and aggressiveness on defense, and then on offense we have to be patient. Ultimately we’re going to have to knock down shots.

“We can be very good offensively, but we’ve hung our hat on the defensive end all year,” Juber said. “If we can make it more of a low-scoring, drag-out game, we’ll have them in a good position.”

A win would push South Hamilton to the state tournament for the 10th time in school history and fifth time in the last seven years.

Where: The Roundhouse, Marshalltown.

At Stake: A spot in the 2A state tournament field.

South Hamilton sophomore forward Austin Busch (14) attracts a crowd as he attacks the basket during Tuesday’s Class 2A District 14 Final against Hudson in Iowa Falls. The Hawks will meet Pella Christian on Saturday in Marshalltown for the right to advance to the state tournament. DFJ photo/Troy Banning