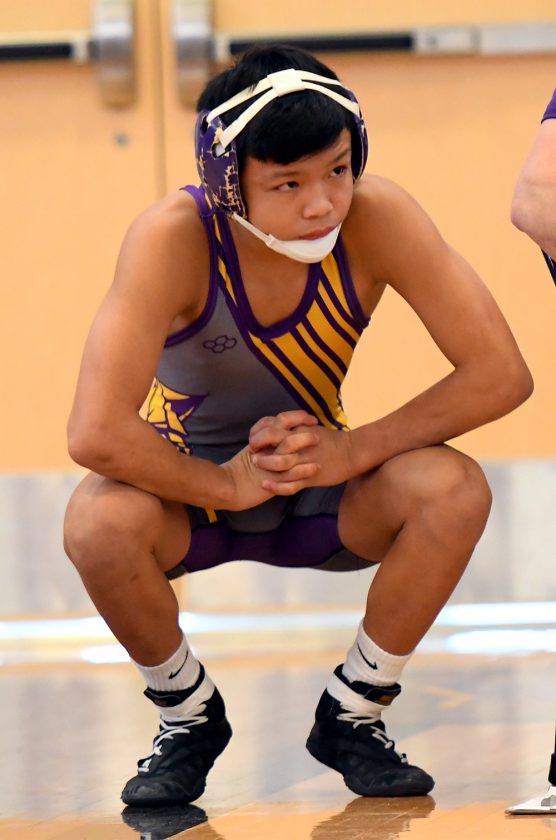 WCHS 106-pounder Cam Phetxoumphone (above) improved to 23-0 on the season at Saturday’s GTRA Invite in Graettinger. DFJ photo/Troy Banning

GRAETTINGER — Ric Flair said it best: To be the man, you’ve got to beat the man.

Phetxoumphone (23-0) kept his unblemished record intact and claimed a GTRA Invite title by blanking second-ranked (1A) Garret Rinken of Nashua-Plainfield, 6-0, in the championship round. A first-period takedown and two-point turn put the bout in his hands, and he finished Rinken off with a third-period takedown.

“I love those tough, hard matches where I have to score and out work my opponent,” Phetxoumphone said. “It’s a really satisfying feeling.”

Phetxoumphone and Rinken had never met prior to Saturday, but they knew plenty about each other.

“We’re really good friends,” Phetxoumphone said. “We’ve been to so many camps together, so I was really looking forward to that match.”

Phetxoumphone has outscored his top-10 foes 46-11.

“I have a winning mindset,” Phetxoumphone, who pinned his first two opponents in under a minute on Saturday, said. “I don’t really have nerves heading into tough matches anymore. I just go out there thinking I can win.”

WCHS claimed two individual crowns, had 10 wrestlers place in the top six and scored 142 points to finish fifth in the 11-team field on Saturday. The Lynx were originally scheduled to compete in Marshalltown’s Allie Morrison Duals, but weather forced the cancellation of the tournament on Friday and Lynx head coach Chad Hisler quickly jumped on the phone to find another tournament.

“We just thank the coach from (GTRA) for letting us in because he didn’t have to,” Hisler said. “It was good to see other teams and there were a lot of quality individuals there.”

The field included 12 ranked individuals, including three No. 1 hammers. Nashua-Plainfield (182), Central Springs (169), Manson-Northwest Webster (151) and Woodbury Central (150) finished in front of the Lynx.

WCHS junior 145-pounder Nick Gasca reached a tournament final and captured gold for the first time in his career, and he did it in dominant fashion. Gasca earned a major decision and two pins, including in the finals where he decked Peyton Strouth of Central Springs in 5:03. Gasca led 14-8 at the time of the fall.

“Nick wrestled really well and showed what he can do,” Hisler said. “It was the Nick we hope to see more of.”

Mason, a freshman, sent an early message with a fall in sudden victory-1 over top-seed Ian Kohnen of Manson-Northwest Webster. The bout was tied at 6 at the end of regulation; Mason took Kohnen down to his back early in the one-minute overtime period.

“Overall I thought we competed very well,” Hisler said. “Austin had a big win, and for the kids to stay focused during a really long day was good to see.”

The tournament took more than 91⁄2 hours to complete.

WCHS will return to North Central Conference dual action on Thursday with a triangular against Humboldt and St. Edmond in Humboldt. The Lynx will take part in the Perry Invite on Saturday.