Catch us if you can

Hawks balanced on offense, stingy on defense to stay perfect in HOIC 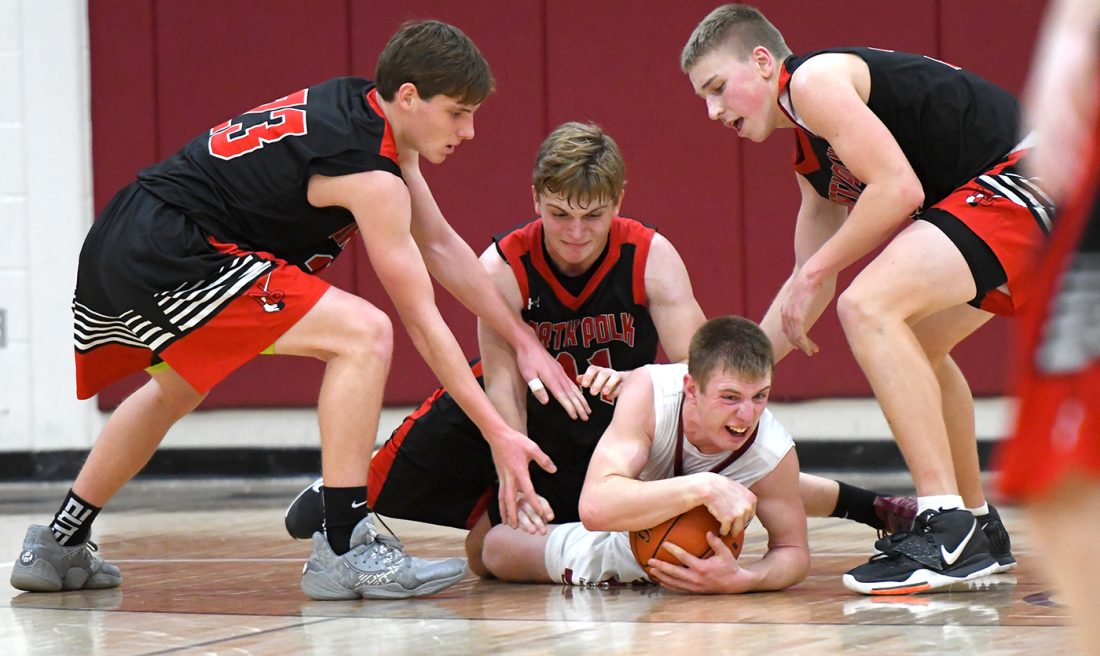 South Hamilton guard Quinton Grove (center) comes out of a scrum with the ball and gets fouled during Tuesday’s 67-50 win over North Polk in Jewell. DFJ photo/Troy Banning

JEWELL — Nerves? What nerves? Kyler Hodnefield felt only excitement when he was given the nod into the starting lineup for the first time Tuesday night.

And that excitement quickly morphed into confidence.

Making his debut in the lineup, the South Hamilton junior guard matched his career-high scoring output of six points just 2 minutes, 26 seconds into the contest and he was only getting started. Hodnefield ripped off 14 first-quarter points — he even left his arm hanging in the air as he trotted to the other end of the court following his second 3-point bucket of the period — to propel the Hawks to a wire-to-wire 67-50 victory over Heart of Iowa Conference rival North Polk on Coach Jim Marsh Court.

“I was ready to go,” Hodnefield, who went 7 for 7 from the field and finished with a team-high 16 points to go along with five assists, said. “We wanted to get on them quick and that’s what we did.”

South Hamilton junior Kyler Hodnefield scores in transition during the first quarter against North Polk on Tuesday. He poured in 14 points in the opening eight minutes and finished with a team-high 16 in a 67-50 win. DFJ photo/Troy Banning

Head coach Matt Juber also inserted Brock Galetich into the starting lineup for the first time, and the moves paid quick dividends. Hodnefield and Galetich scored the game’s initial 10 points and, essentially, it was over. North Polk (3-5, 3-3 HOIC) never pulled closer than seven points over the final 29 minutes.

“I’m not sure what my best lineup will be night to night, but against (North Polk), going with Brock and Kyler, we thought we matched up well,” Juber said. “Kyler gets after it and it’s been my fault holding what he does well back. But (Tuesday night) I let him loose, he does his thing and good things happen for this team.”

Galetich finished with 10 points. Cade Balvanz poured in 14 points from the paint, 12 of them coming in the second half, while Doran Lutjen and Quinton Grove had 11 points each. Lutjen also had five steals and three assists, while Balvanz and Grove combined for 13 rebounds.

South Hamilton (6-2, 6-0 HOIC) shot a staggering 65 percent from the floor (26 of 40). Galetich was also perfect in three attempts, and Balvanz clanged just one of eight shots.

The Hawks needed all of the offensive firepower they could muster to withstand the assault of North Polk sophomore Jevin Sullivan and his buttery shot. Sullivan scored from everywhere regardless of the defense South Hamilton threw his way and finished with 26 points. He was responsible for 11 of the Comets’ 17 field goals. 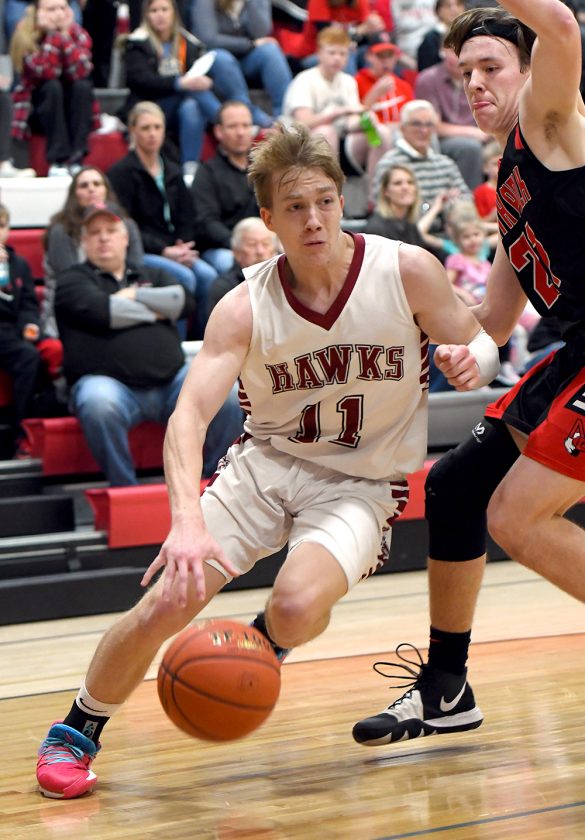 “A hell of a player, probably one of the toughest guards we’re going to see all year,” Juber said of Sullivan. “Everyone that tried to check him did a pretty good job, but you tip your hat when a kid does that.”

South Hamilton led 21-13 after one quarter and 31-20 at the break. Pressure defense out top from Galetich, Hodnefield and Grove, as well as reserves Freddie Lewis and Aaron Hegland caused constant headaches for North Polk during the opening 16 minutes.

“Our pregame message always is to get out and dictate,” Hodnefield said. “Get on them early and keep that ship rolling through the third and fourth quarters, and that’s what we did.”

The Hawks extended the lead to 15 midway through the third, but North Polk never went away. The Comets closed to within 10 going into the final period.

Galetich ignited a 9-0 spurt with three free throws, and Balvanz did the rest with three consecutive buckets, to extend South Hamilton’s lead to 19, 59-40, with four minutes remaining. 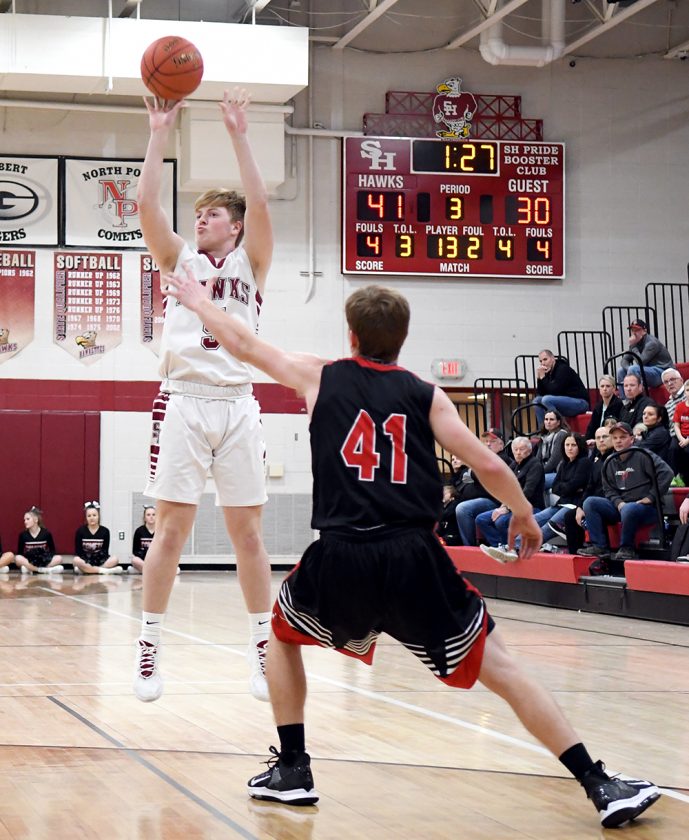 North Polk answered with its own 7-0 run behind five consecutive points from Sullivan, but the Comets never pulled within single digits down the stretch.

South Hamilton guard Quinton Grove (center) comes out of a scrum with the ball and gets fouled during Tuesday’s 67-50 win over North Polk in Jewell. DFJ photo/Troy Banning

South Hamilton junior Kyler Hodnefield scores in transition during the first quarter against North Polk on Tuesday. He poured in 14 points in the opening eight minutes and finished with a team-high 16 in a 67-50 win. DFJ photo/Troy Banning