Sharar an assist away from triple-double, 5 players score in double figures for WCHS 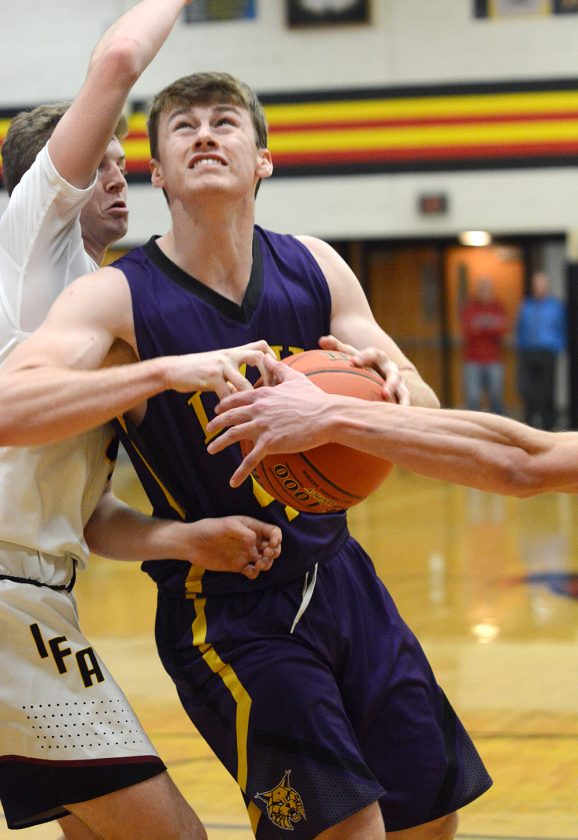 Webster City senior forward Will Tasler takes the ball strong to the bucket as hands attempt to rip it away against Iowa Falls-Alden on Friday in Iowa Falls. DFJ photo/Tracy Queen

IOWA FALLS — The stars came out to play for the Iowa Falls-Alden boys’ basketball team Friday night, and there really wasn’t much Webster City could do about it.

Division I prospect Karson Sharar was one assist away from a triple-double and the high-octane Cadets had a pair of 20-point scorers and four in double figures in a 73-64 North Central Conference victory over the Lynx.

“I’ve got to give them credit because they’re a very good offensive team,” WCHS head coach Marty McKinney said of the Cadets. “It’s kind of pick your poison because they shoot so well. Sharar is so tough off the dribble, but they had other kids that stepped up.”

Sharar erupted for 21 points, 10 rebounds and nine assists. But McKinney said the offensive exploits of Logan Aldinger, who finished with 20 points, were equally devastating. 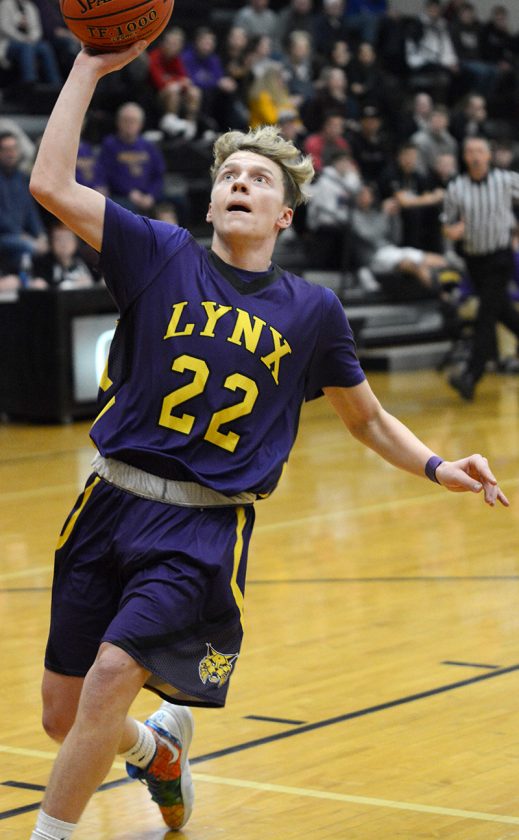 Carter Neuroth glides in for an uncontested layup against Iowa Falls-Alden on Friday in Iowa Falls. He had 13 points, eight assists and three steals for Webster City in a 73-64 loss. DFJ photo/Tracy Queen

McKinney said his club had trouble staying in front of the Cadets. And on those rare occasions they did miss, WCHS (5-2, 3-2 NCC) was unable to secure enough rebounds.

“We just weren’t very good off the dribble and once we had to help … when you have a team that can shoot like that, you’re putting yourself in a bad spot,” he said.

WCHS torched the nets as well, as it connected on 52 percent of its shots (26 of 50), including 41 percent (9 of 22) from behind the 3-point arc. Five Lynx players scored in double figures, led by Tavis Eklund with 14 and Carter Neuroth with 13. Drake Doering produced 12 points, while Tyler Olson and Jamin Stuhr both added 10 more.

“We shot the ball extremely well, but turnovers (16) killed us,” McKinney said. “We knew we were going to have to score points, but we got in a shootout with them and we’re not going to win very many shootouts. We’re not going to beat anybody giving up over 70 points, that’s just not our philosophy.”

Neuroth added eight assists and three steals. Doering led the way on the glass with six rebounds, one more than Stuhr who again came off the bench and provided the Lynx with a lift.

IF-A (6-2, 3-2 NCC) led 30-29 at the break and then outscored the Lynx 20-13 in the third quarter. The Cadets build the lead to as many as 14 points before WCHS staged a fourth-quarter rally to get within striking distance.

“I’m proud of the effort of the guys,” McKinney said. “It’s probably one of our better efforts of the year even in a loss. We battled back and at least gave ourselves a chance.”

WCHS will hit the road for a non-conference game against Manson-Northwest Webster Tuesday night.

Webster City senior forward Will Tasler takes the ball strong to the bucket as hands attempt to rip it away against Iowa Falls-Alden on Friday in Iowa Falls. DFJ photo/Tracy Queen

Carter Neuroth glides in for an uncontested layup against Iowa Falls-Alden on Friday in Iowa Falls. He had 13 points, eight assists and three steals for Webster City in a 73-64 loss. DFJ photo/Tracy Queen