TAKE A STROLL DOWN MEMORY LANE

Jeff Gym will return to life when Lynx host St. Edmond next Friday 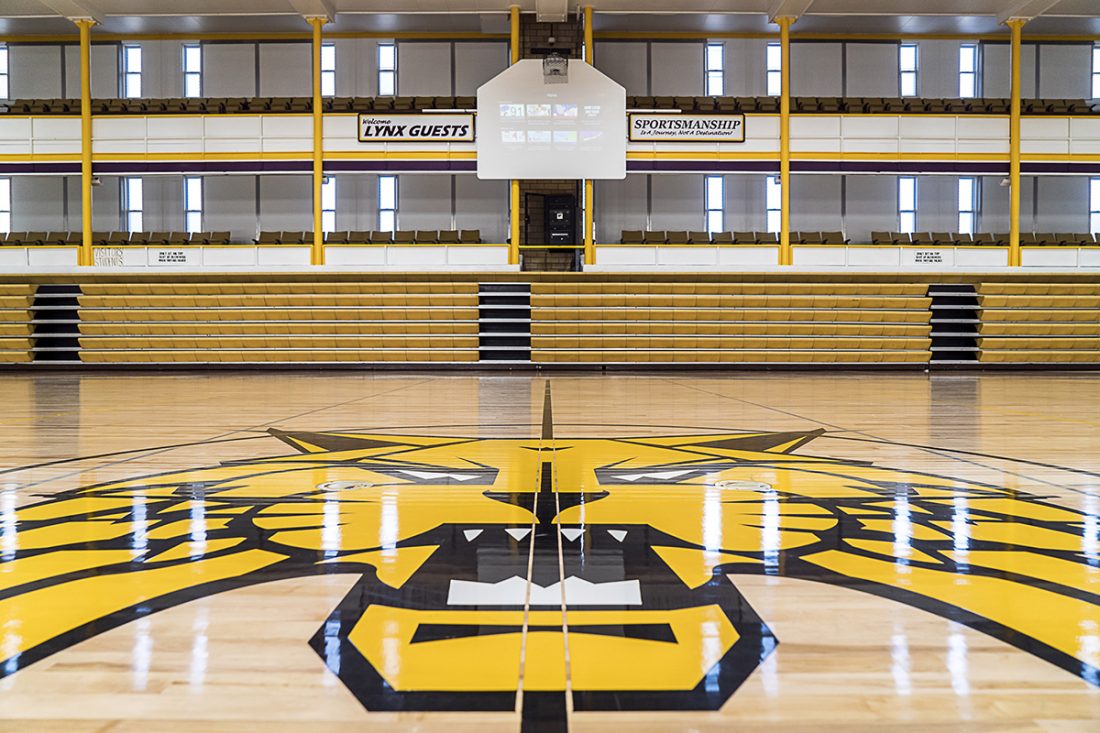 The home of Webster City basketball for 70 years, Jefferson Gymnasium will once again come to life next Friday when the Lynx host Fort Dodge St. Edmond. The doubleheader will be the first varsity games held in the legendary gymnasium since February of 2012. DFJ photo/Brendan Hoffman

The home of Webster City basketball for 70 years, Jefferson Gymnasium will once again come to life next Friday when the Lynx host Fort Dodge St. Edmond. The doubleheader will be the first varsity games held in the legendary gymnasium since February of 2012. DFJ photo/Brendan Hoffman

Jefferson Gymnasium last hosted a varsity basketball game on Feb. 20, 2012, when the Webster City boys’ basketball team knocked off Humboldt, 44-34, in a Class 3A district game. That drought will end next Friday night. DFJ photo/Brendan Hoffman

WEBSTER CITY — Everyone enjoys a stroll down memory lane, the chance to bathe in nostalgia if only for a brief moment.

For one night only, the Lynx basketball teams will return to Jefferson Gymnasium next Friday, Dec. 13, when Fort Dodge St. Edmond comes to town for a North Central Conference doubleheader. The girls will tip-off at 6:15 p.m., followed by the boys at 7:45 p.m.

Marty McKinney, a former WCHS player who has served as the boys’ head coach since 2008, has enough memories of the old gym to last a lifetime. He’s excited to add a few more next week.

“Jeff Gym is just a great game-night atmosphere,” he said. “It’s a special place and my memories go back to when I was a kid growing up and going there any chance I got. I watched some great teams from the 1980s and then I got to play in there in middle school and high school. Then to be able to turn around in my adult years and be a head coach the last four years the place was open, that was special.” 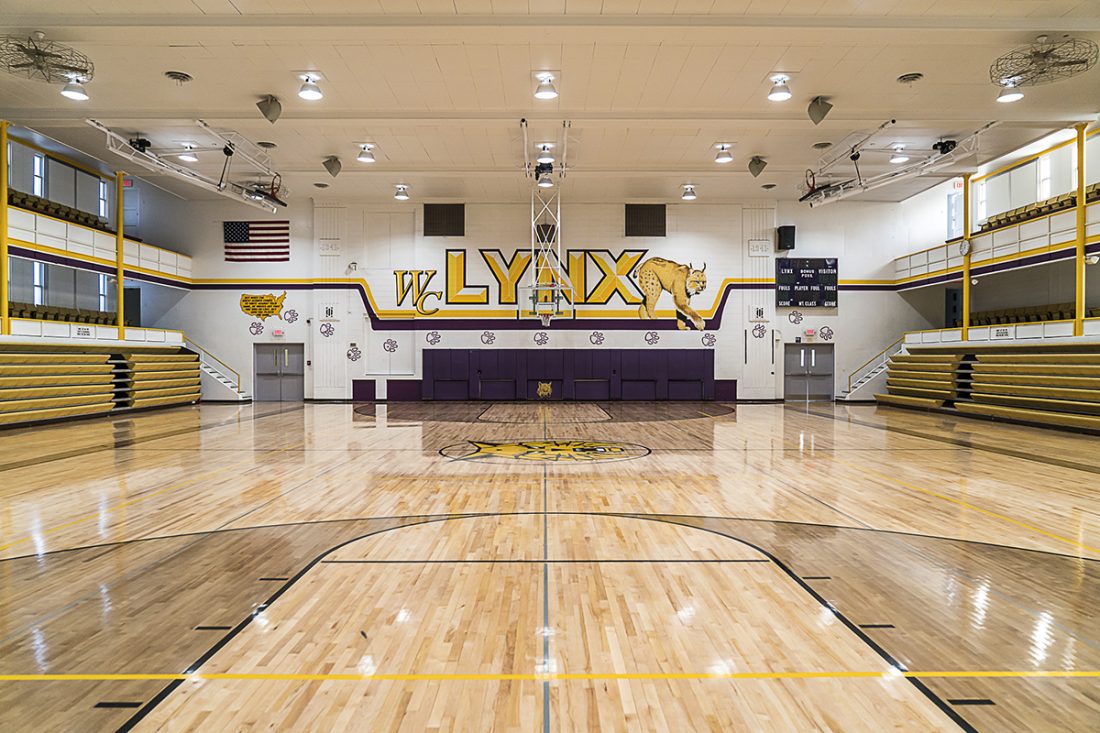 Jefferson Gymnasium last hosted a varsity basketball game on Feb. 20, 2012, when the Webster City boys’ basketball team knocked off Humboldt, 44-34, in a Class 3A district game. That drought will end next Friday night. DFJ photo/Brendan Hoffman

First opened in the early 1940s and the home of WCHS basketball for 70 years, Jeff Gym hasn’t hosted a varsity game since Feb. 20, 2012, when the Lynx boys’ team gave it a proper send-off with a 44-34 victory over Humboldt in a Class 3A district contest. The WCHS competition gymnasium — a state-of-the-art complex that remains one of the finest gyms in the state — opened its doors in the fall of 2012.

The mystique surrounding Jeff Gym remains, however, and over the past year a quiet campaign began to see it come to life once again.

“I don’t know how long it’s been talked about, but it was before I took over as interim (athletic director),” Joe Shanks, who came to WCHS in January and took over as the full-time AD a few months later, said. “There are a lot of people excited about it.”

McKinney says it was actually some of his players who began the campaign.

“To be honest, they were the big catalysts or pushers. They wanted to do it,” McKinney said. “They’ve been saying even for a few years that they’d like to go back and have a varsity game.”

Jeff Gym has undergone a bit of a makeover since the last time the general public took in the sights. This past summer the playing surface was refurbished and new lights were installed to round the arena into the shape where it could host a varsity game.

Of course, the balcony remains just as it always has, as do the theater seats behind the bleachers.

“It just hasn’t been playable for varsity games in a few years,” McKinney said. “There were some things that needed to be done, but this past summer they did all the upgrades in there and it looks fantastic.”

Jeff Gym, which has housed middle school games over the last seven years, is certainly not as spacious as the competition gymnasium, but the cramped quarters were always one of its finest features for big games. WCHS and St. Edmond played plenty of them over the years, which is why the Gaels were an obvious choice to return to the scene of so many memorable battles.

“I have my memories of it,” Shanks, who was formerly the AD at St. Edmond, said. “When you went into Jeff Gym, you knew what to expect in terms of intensity in that atmosphere. You didn’t get that in every (gym) you went to.”

Jeff Gym hosted one of the more iconic games of the last 20 years when the Lynx boys fended off St. Edmond in a battle of league heavyweights during the 1999-00 season. The Gaels won the rematch in Fort Dodge later that season and went on to claim a Class 2A state championship that winter.

The chance to experience that atmosphere first-hand is one of the reasons WCHS girls’ coach Nicole Muhlenbruch was on board with moving one game into the relic.

“The girls are excited,” Muhlenbruch said. “They want to wear some throwback warm-ups, so I’m trying to dig up enough of those. It should be fun.”

Senior Taylor McKinney, the WCHS girls’ 5-on-5 all-time scoring leader and the daughter of Marty McKinney, grew up watching her dad’s practices in Jeff Gym.

The night is being dubbed “The Legacy Game,” and T-shirts for the occasion are available for purchase, but you have to hurry. Order forms — available on the WCHS Facebook page, as well as at the high school and middle school — must be turned in by today at 3 p.m. Shirts cost $10 each ($12 for 2XL and $13 for 3XL).