Hoversten with her 2nd straight monster game in NCC?opener 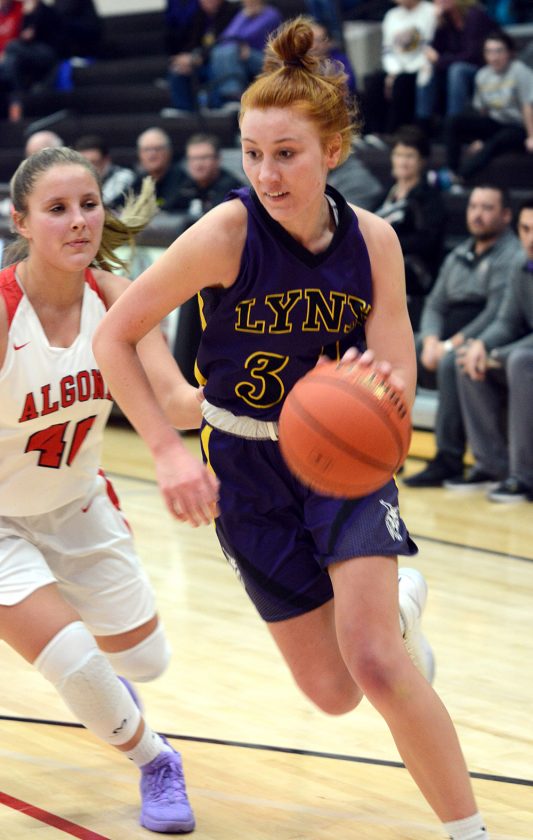 WCHS senior Grace Hoversten goes by Algona’s Aliyah Buscher on her way to the basket on Friday in Algona. She had 21 points and 14 rebounds in an OT loss. DFJ photo/Tracy Queen

ALGONA — Silence, blank stares and a few sniffles attached to tears — that’s pretty much all there was in the Webster City locker room following Friday’s North Central Conference opener.

Oh, and shock. A whole lot of shock.

It was supposed to be yet another signature victory,this time on the road, for Nicole Muhlenbruch’s Lynx girls program. Instead, it was a bitter loss that lingered the entire way home.

Trailing by 14 points after three quarters and by 10 with 3:32 to play, 14th-ranked (Class 3A) Algona rallied to force overtime on a buzzer-beating layup by Abbey Holmes and then added the ultimate gut punch — an Aliyah Buscher short jumper with three seconds remaining in OT — to steal the contest from WCHS, 65-63.

“It’s probably one of the losses that hurts the most, I think for the girls and the coaches both,” Muhlenbruch, the Lynx head coach, said. “It just ripped our hearts out.” 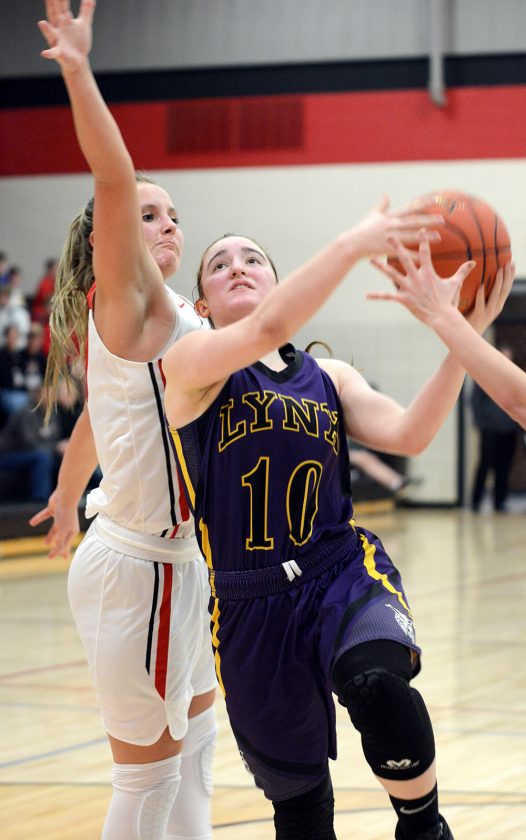 Losing the game was difficult enough. But coughing up a double-digit lead was particularly disheartening.

“You could say we should have done this and we should have done that, but every team can do that after a game,” Muhlenbruch said. “If you look at the overall picture … we had kids that stepped up and played wonderfully. But Abbey Holmes is a wonderful player and you can’t take anything away from her. When they needed it, she brought it.”

Holmes, a three-time all-NCC performer for the defending league champion Bulldogs, popped off for 21 points, 15 of them coming in the fourth period and OT. She buried two of Algona’s 12 3-point baskets. 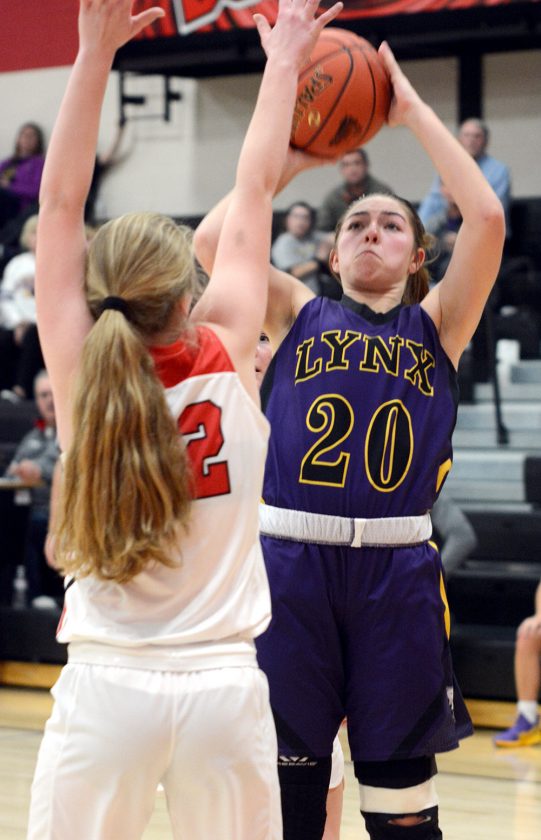 Grace Hoversten had her second straight monster performance for WCHS. Coming off a 13-point, 24-rebound showing in a win over Pocahontas Area last Tuesday, the senior forward registered 21 points and 14 rebounds on Friday.

That’s 34 points and 38 boards during a two-game stretch.

And yet Hoversten was unimpressed.

“Her comment to me was, ‘I don’t even care, we lost. I don’t care that I had how many points and how many rebounds because we lost,’ which I thought was great,” Muhlenbruch said.

“Adalie had a really good game,” Muhlenbruch said. “She hit some key shots and she played really good defense. She just does her job and you can’t ask for more.”

WCHS outscored Algona 25-10 in the third quarter to take a 48-34 lead into the final period. But Algona ramped up the defensive pressure over the final eight minutes of regulation and continued to cause problems for the Lynx in the extra session.

“We shot the ball well, but when they put the pressure on us in the fourth quarter we got tentative and didn’t do what we did the rest of the game,” Muhlenbruch said. “It’s hard to simulate that (pressure defense) in practice. You can try your hardest, but it’s not the same as when the game is on the line. We’ll keep trying to figure it out.”

Muhlenbruch knows her team has to have a short memory with a challenging non-conference road date with South Central Calhoun on the docket for Tuesday.

“We’ve got to move on and look at South Central Calhoun and St. Edmond (Friday’s opponent), and worry about them,” she said. “We’ll get another shot at Algona later in the season.”

WCHS senior Grace Hoversten goes by Algona’s Aliyah Buscher on her way to the basket on Friday in Algona. She had 21 points and 14 rebounds in an OT loss. DFJ photo/Tracy Queen 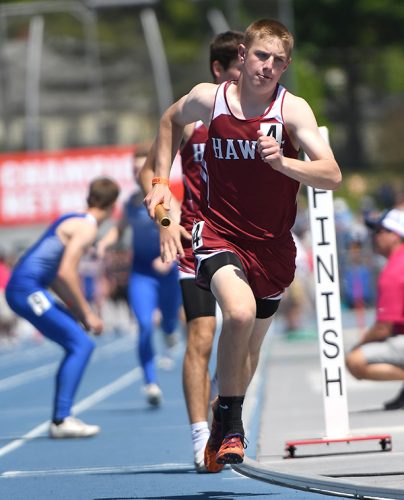 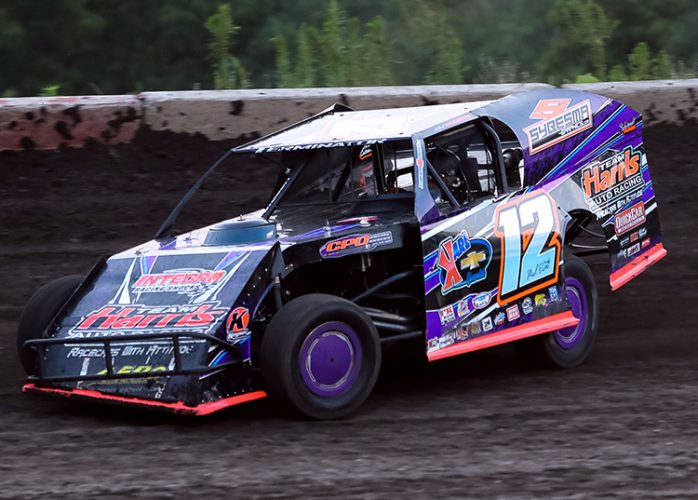 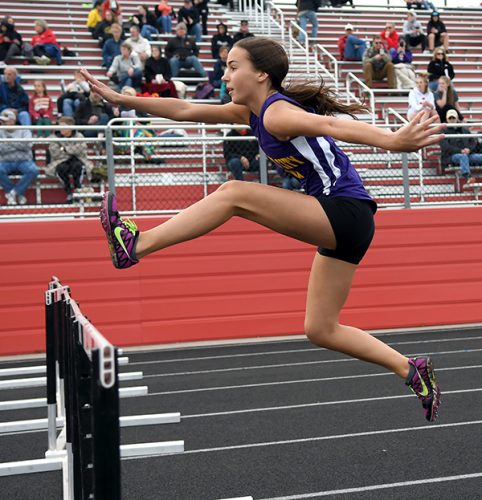