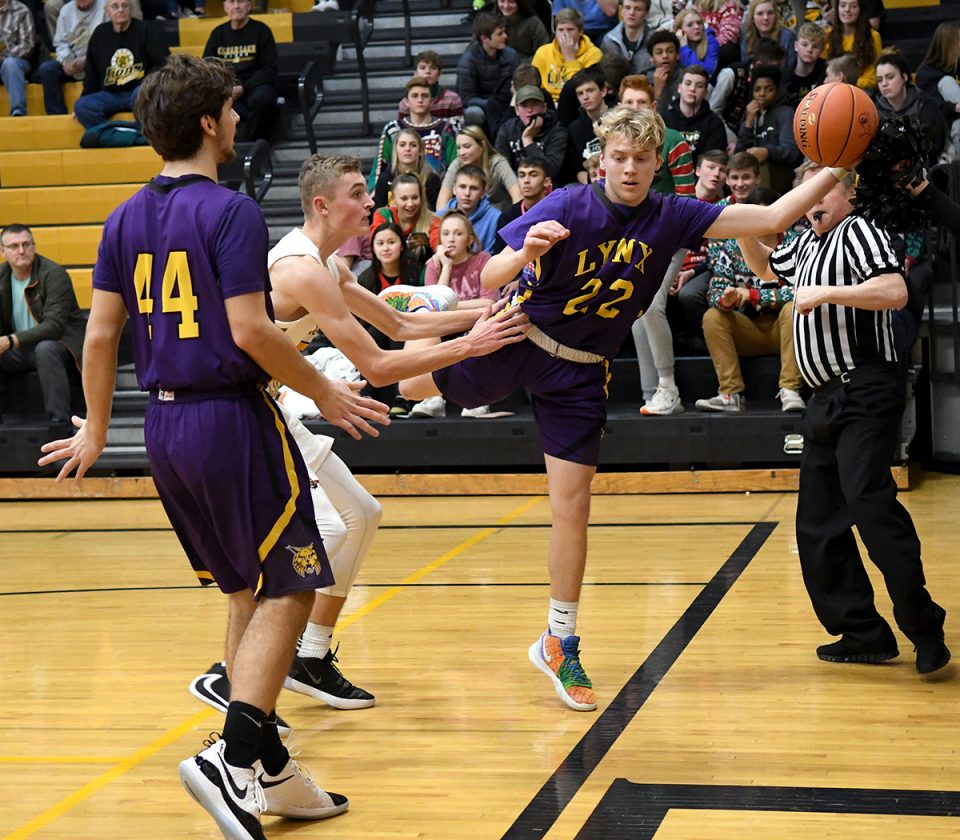 Carter Neuroth (22) attempts to save the ball before it goes out of bounds during Webster City’s loss to Clear Lake Tuesday night. DFJ photo/Troy Banning

CLEAR LAKE — You can’t teach height. And, as Webster City found out Tuesday night, it’s hard to defend too, particularly when it’s the one glaring thing the Lynx lack.

Undersized all over the floor, WCHS had no answer inside the paint against two-time defending North Central Conference champion Clear Lake. Executing what looked like a layup drill at times, the Lions rolled to their 27th consecutive league victory in a rout, 69-41.

“You’ve got to give them credit because they’ve got a nice team,” WCHS head coach Marty McKinney said of Clear Lake, which has now gone more than two years without an NCC setback, the last one a 49-47 loss to Algona on Dec. 8, 2017. “They’ve got size and you can tell they’ve worked hard in the weight room. They’re not skinny 6-3, 6-4 and 6-5 guys either. They’re strong.”

Lions’ 6-3 guard Carson Toebe lit up the Lynx for a game-high 24 points, 15 of which came from behind the 3-point arc. Andrew Formanek, a 6-6 forward, had his way inside with 20 points.

Toebe, a sophomore, is a big reason why the Lions’ league win streak is still intact. He hit the second-chance jumper at the buzzer to beat WCHS, 52-51, in the previous meeting between the rivals in January. 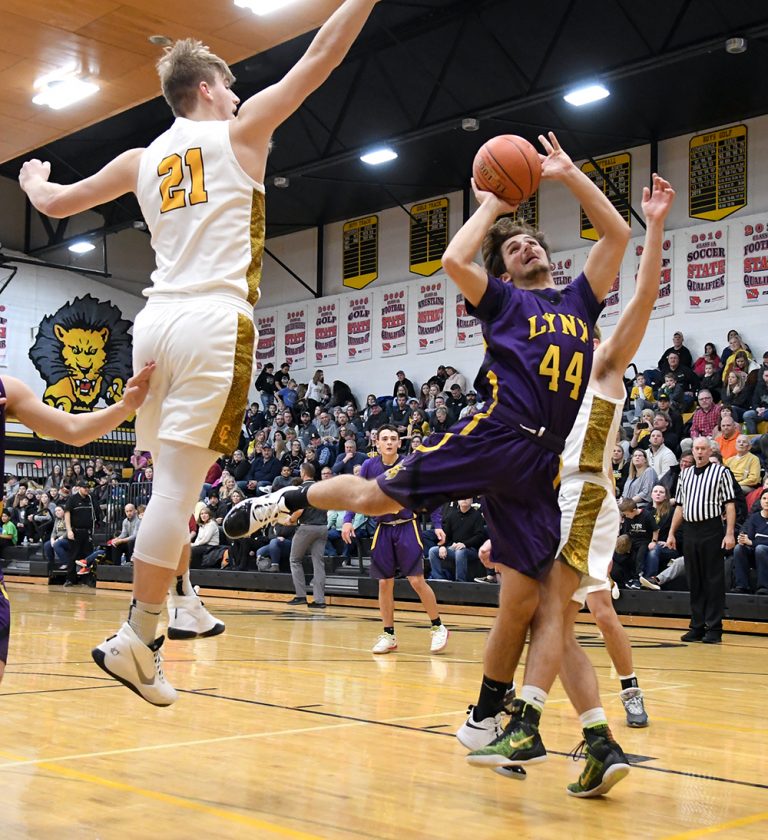 Clear Lake (4-1, 3-0 NCC) shot 55 percent from the floor and it cleaned up many of the shots it missed. The Lions owned a 35-18 rebounding edge, including 15 caroms on the offensive glass.

The rebounding dominance was on display in the waning moments of the first half when Clear Lake got three chances at the rim before Formanek dropped in a shot off the glass and was fouled. He missed the free throw, but the Lions snagged the ball again, missed and rebounded again, then completed the five-point possession with a Toebe 3 from the top of the key to take a 43-22 lead into the break.

WCHS (3-1, 1-1 NCC), which lost for the first time this season, fell behind by as many as 32 points in the third quarter — an eight-minute stretch in which Clear Lake dropped in one uncontested shot after another at the rim.

“The biggest disappointing part of the whole thing was the lack of competing in the second half,” McKinney said. “At halftime we knew it was going to be a long shot that we could come back and win, but we wanted to establish something that we could build off of, but we didn’t do that.”

Explosive offensively in its opening two non-conference games of the season, WCHS has now struggled in back-to-back conference games. McKinney says his team can counter those off nights at the defensive end, but so far that hasn’t materialized. 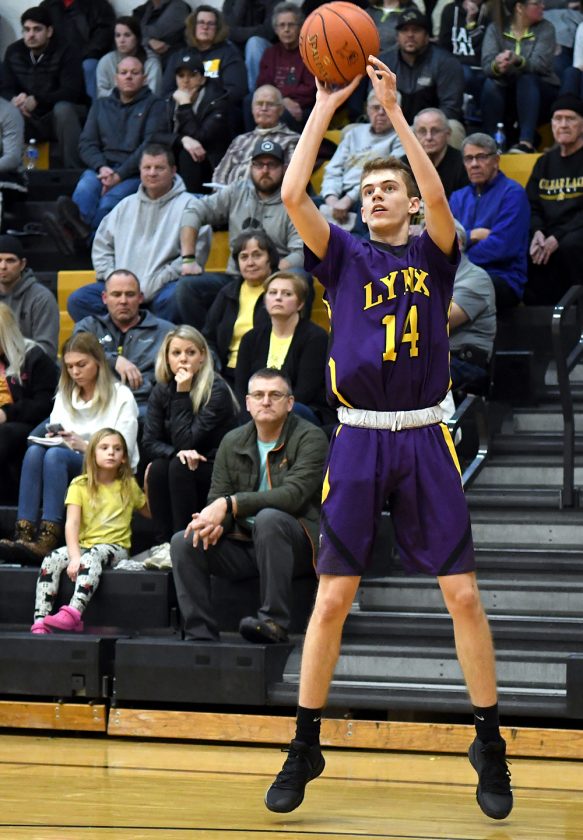 Lynx guard Tavis Eklund frees himself for an open look at a 3-pointer on Tuesday. DFJ photo/Troy Banning

“This is the third night in a row where I think I’ve said we have to find a defensive identity, and it’s my job as a coach to figure out where to put the pieces,” he said. “We scored 70 points in those first two games and we got a little false sense of confidence. Then you run into a team like this that’s a match-up issue for us and you have nights like this.”

WCHS shot 35 percent overall — not great and not abysmal — but just 15 percent from the arc. Drake Doering and Tavis Eklund both connected on triples in the opening four minutes to keep the Lynx within three points, but they made just one more the rest of the night — a third-quarter bomb from Carter Neuroth.

Clear Lake ended the first quarter on a 12-2 spurt to take a 24-10 advantage after eight minutes. WCHS never pulled to within single digits again.

Tyler Olson led the Lynx with 11 points, six rebounds and three steals. Eklund added seven points, while Doering and Neuroth had five each.

WCHS will hit the road to take on Hampton-Dumont on Friday and then it will be time for McKinney boot camp over the holiday break. 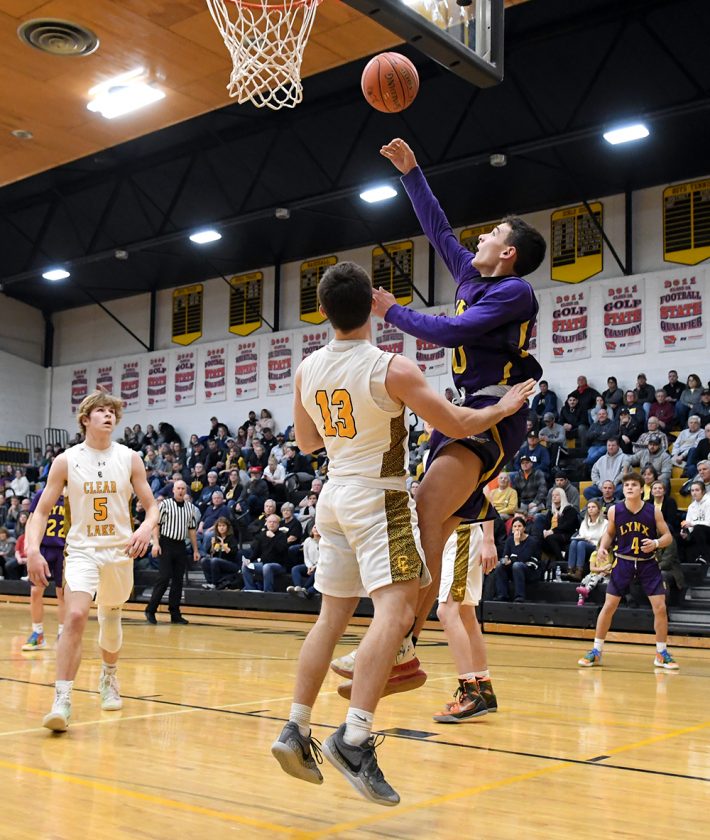 “This loss can’t define us and if it does it’s going to be a long year,” McKinney said. “We have to get better and the Christmas break, in my opinion, is the biggest part of the year. You know what you do well and you know what you don’t do well. We’re going to have to see what mentality we have.” 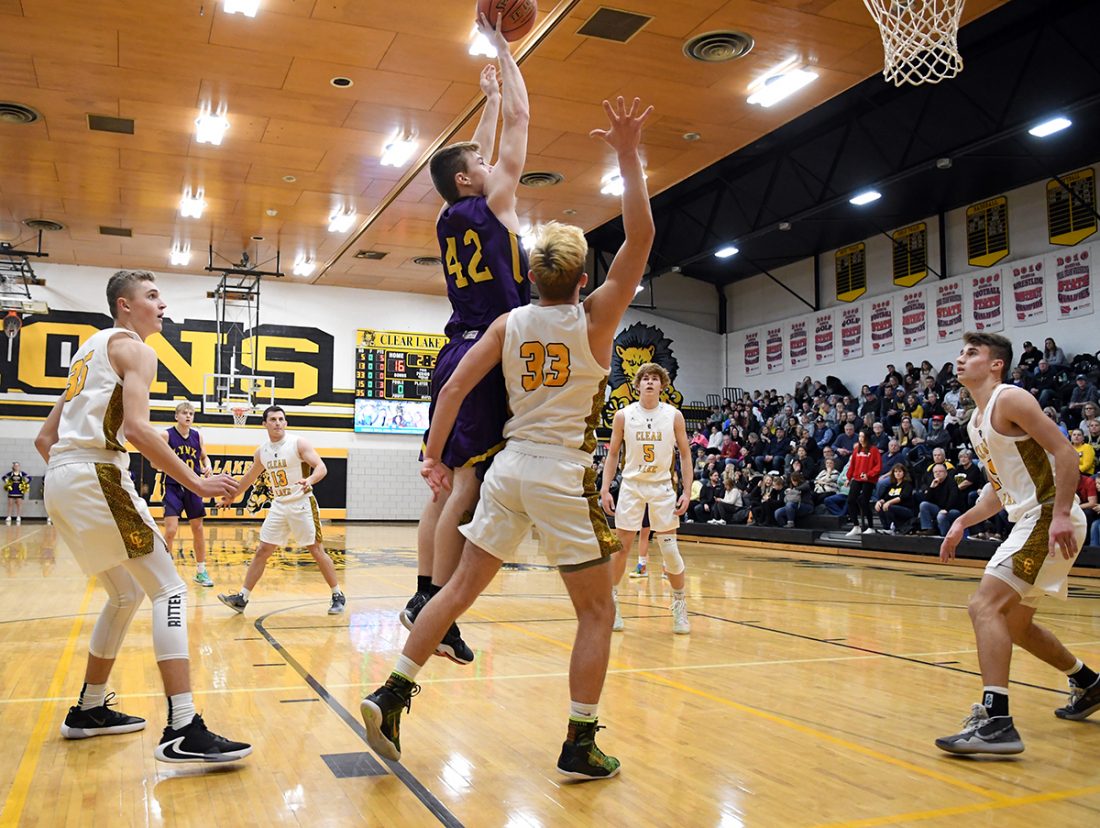 Carter Neuroth (22) attempts to save the ball before it goes out of bounds during Webster City’s loss to Clear Lake Tuesday night. DFJ photo/Troy Banning

Lynx guard Tavis Eklund frees himself for an open look at a 3-pointer on Tuesday. DFJ photo/Troy Banning