Lynx collect 10 Class 3A District 2 awards, 6 on the top team 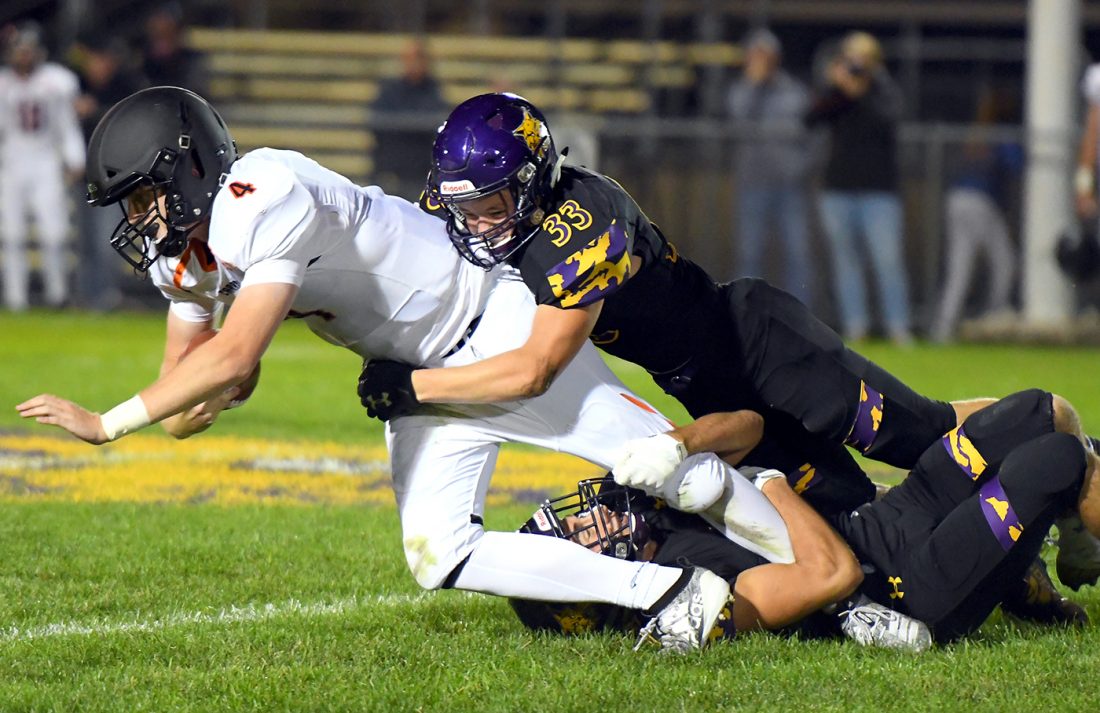 WCHS freshman Connor Hanson (33) hits Carroll quarterback Colby Vincent (4) from behind during a game this season. Hanson was one of six Lynx players named to the Class 3A District 2 all-district team. Four others WCHS players were honorable mention choices. DFJ photo/Troy Banning

Freshmen don’t step between the varsity lines and make a dramatic impact very often. Heck, in Class 3A they rarely even suit up and stand on the sideline.

“It was a big decision to play a freshman and it was a culture shock I’m sure for him, but he had a great season,” Howard said. 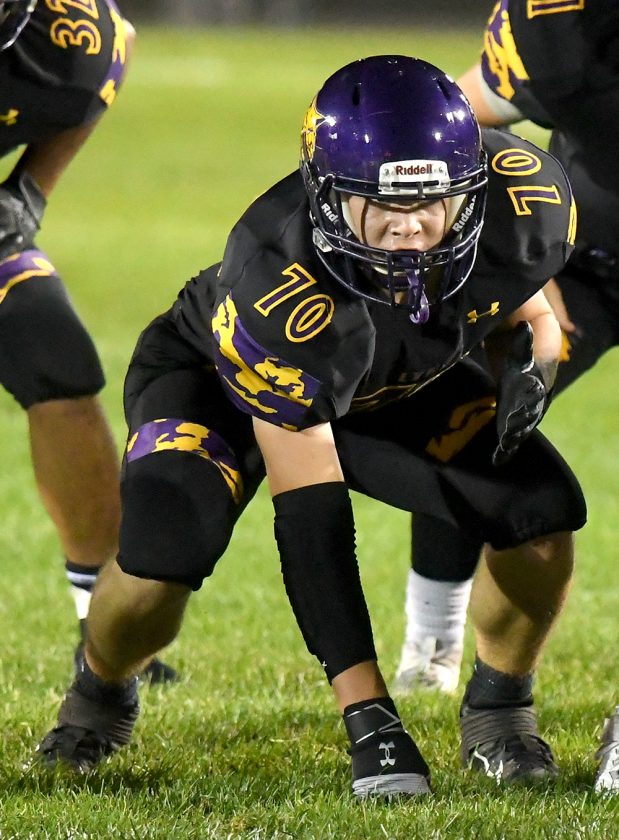 WCHS sophomore guard Truman Klein lines up during a game this season. He and fellow Lynx guard Will Tasler were both named to the Class 3A District 2 first team. DFJ photo/Troy Banning

Hanson’s talents and production at nose tackle were proven with a spot on the 3A District 2 all-district squad at season’s end. He was one of six WCHS players to make the team; a total of 10 Lynx in all were honored.

Lining up directly over the center throughout the season, Hanson was a standout. He was third on the team in total tackles with 381⁄2 and led the defense in tackles for loss with seven.

And, yes, even Howard was surprised.

“I definitely thought he could play there, but I guess I was surprised at how big of an impact he made,” Howard said. “I was hoping he could make one or two plays a game, but he was consistent every game and he was a playmaker He played as well as a true nose as anybody I’ve had since I’ve been here.”

With a combination of speed, power and savvy, Mathis won the district rushing title with 1,333 yards, the second-most in 3A during the regular season, and scored 25 touchdowns, the most in the district and class.

Humboldt senior running back Jamison Heinz was named the district offensive player of the year. He was second to Mathis in rushing yards (1,134) and scored 12 fewer TDs (13).

“I would compare his speed to Keagan Parks when he gets out in the open and he runs physically at times like Connor Larson or Gavin Dinsdale. The bigger part of him I see are his running instincts remind me of Robert Frederiksen in how he sets up blocks,” Howard said. “The combination of everything, he’s as good as we’ve had and we’ve had some pretty good tailbacks. I’m glad he’s back for another year.”

Whitmore, a senior wingback, did plenty of damage as well and finished fourth on the district’s rushing hierarchy with 755 yards. He averaged 6.9 yards per carry.

WCHS led District 2 in rushing by more than 700 yards and the backfield certainly played a pivotal role in that success. But so did the offensive line, which was anchored by Tasler and Klein at the guard spots.

“Will was like having somebody new move in because he missed all of (the 2018 season) and had a great season,” Howard said. “Truman Klein is on track to be as good a quick guard as I’ve had and that’s a pretty big statement.”

There was no better defensive ball hawk in the state than Olson, who collected 12 interceptions — a single-season school record and one of the top five campaigns in the state’s 11-player history. He led the state, regardless of class, and was one of only two players to register a double-digit total.

Olson, who was also fifth on the team with 33 tackles, had at least one INT in eight of the Lynx nine games.

Van Diest (53) and Stuhr (361⁄2) ranked first and fourth, respectively, on the team in tackles. Klaver played at one of the Lynx tackle positions and Kolbeck served as the team’s center on the offensive line.

Of the Lynx 10 all-district selections, seven will return next season.

WCHS put together a 6-3 season, including a 3-2 mark in district play — good enough for third place behind district champion Dallas Center-Grimes and Carroll.

WCHS freshman Connor Hanson (33) hits Carroll quarterback Colby Vincent (4) from behind during a game this season. Hanson was one of six Lynx players named to the Class 3A District 2 all-district team. Four others WCHS players were honorable mention choices. DFJ photo/Troy Banning

WCHS sophomore guard Truman Klein lines up during a game this season. He and fellow Lynx guard Will Tasler were both named to the Class 3A District 2 first team. DFJ photo/Troy Banning