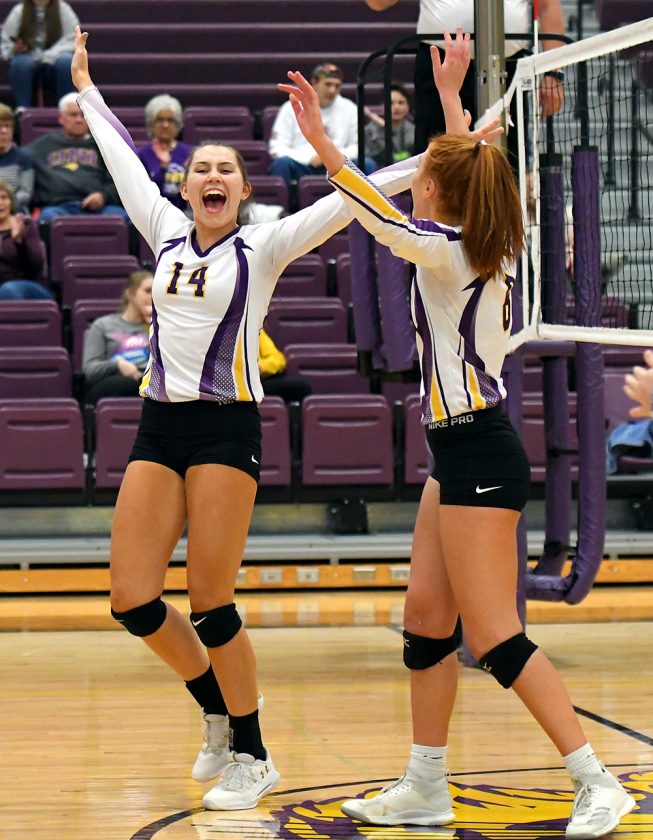 WEBSTER CITY — Adalie Schwandt stomped the floor, threw her hands into the air and yelled. After which point? Try all night long.

The Webster City senior attacker had the time of her life in her final match on her home floor last night, and her celebratory mood was infectious.

Schwandt set the tone early with four first-set kills and she blasted a team-high eight to lead WCHS to a convincing 3-0 sweep of Boone in a Class 4A Region 3 quarterfinal.

The match, which took just over an hour, ended on — what else? — a Schwandt smack from the left side.

“Getting that last kill in this gym, that made (last night) just the best night it could be,” Schwandt, who also had five digs, said following the 25-16, 25-15, 25-7 rout. “We’re a lot better when we play having fun than when we’re down on ourselves.” 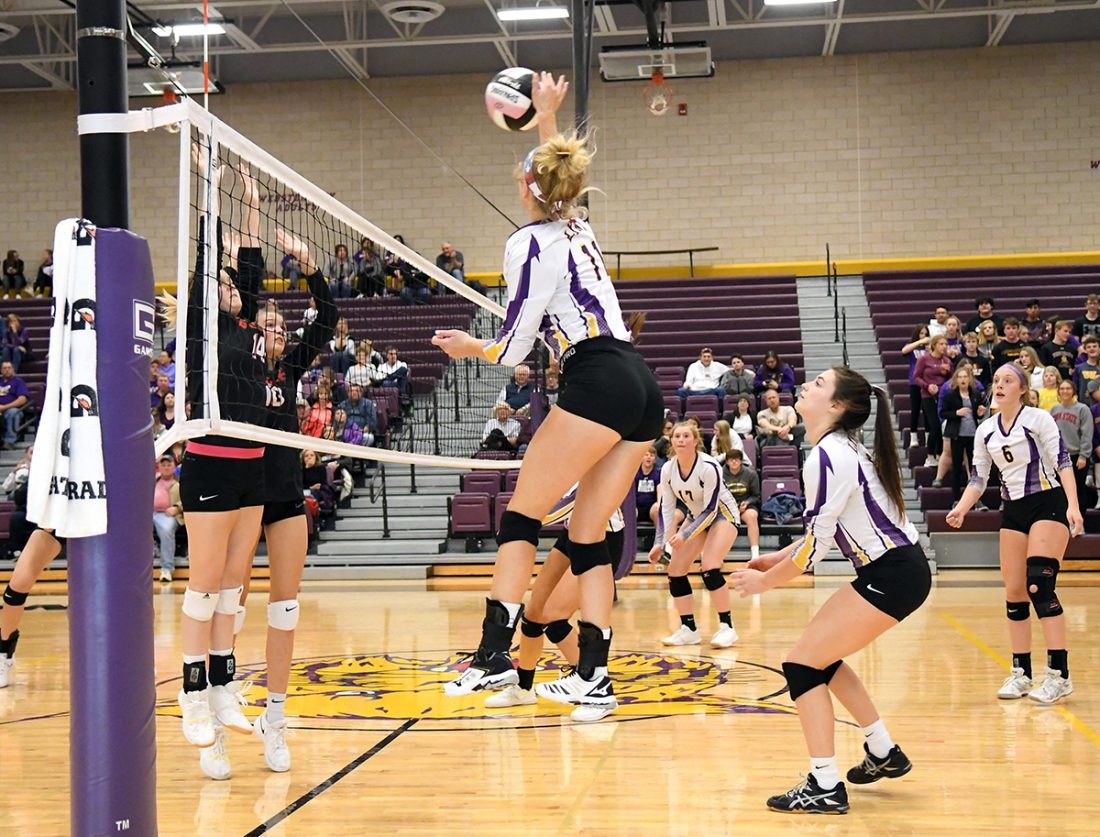 Faith Anderson blasts away from the outside during the second set of Webster City’s win over Boone last night. DFJ photo/Troy Banning

The Lynx (19-16) didn’t have much to be frustrated about against a Boone (2-31) squad that was blanked for the 25th time this season. WCHS trailed for only one point in the bout, and that occurred after a Toreador ace on the opening point.

In fact, there were just three ties. WCHS went on runs in every set and never gave Boone a moment to get comfortable.

“We controlled the tempo and were able to run our type of volleyball,” WCHS head coach Jess Howard said. “We kept it in our system the entire time and were aggressive. We made them play a lot of defense.”

WCHS spread the offensive wealth too. Haley Foster pitched in seven kills, Grace Hoversten — Big Red to her teammates — hammered down six and piled up 61⁄2 blocks, and Faith Anderson and Sierra Rattenborg both finished with four kills. 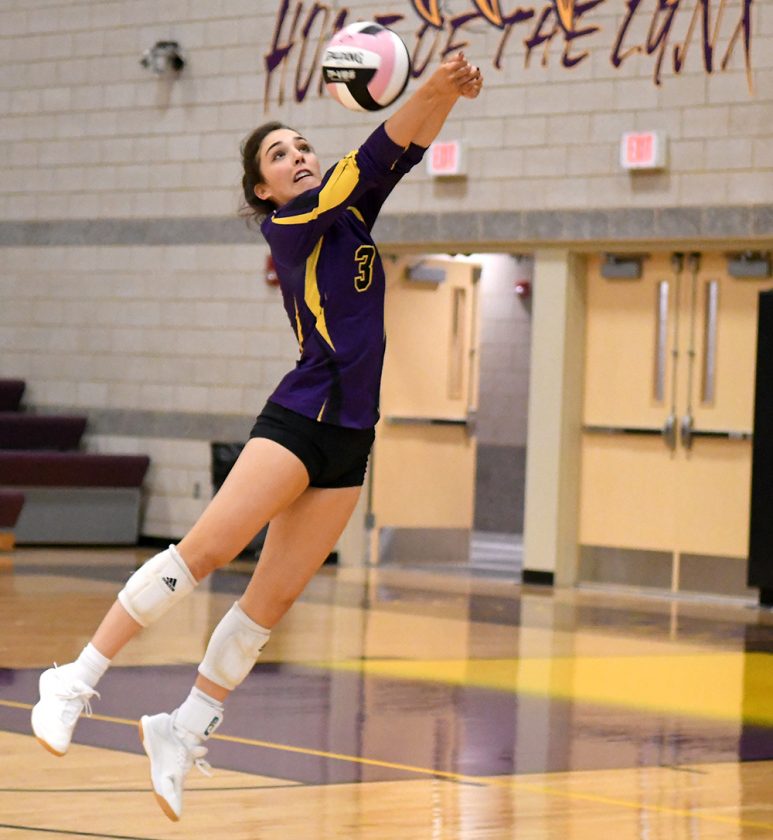 WCHS libero Alayna Finucan lunges for one of her 15 digs in the Lynx 3-0 win over Boone in a Class 4A Region 3 quarterfinal last night. DFJ photo/Troy Banning

Rattenborg, a freshman, got her first run with the varsity squad in the most important match of the season and looked right at home. Her kill off a block ended the first set and she capitalized twice more in the final stanza.

“She came out strong and she didn’t let nerves or anything like that get into her head,” Howard said of Rattenborg, who also had 11⁄2 blocks and a pair of digs. “She’s been performing really well in practice. There’s always competition and competition provides girls with the chance to step up to the plate.” 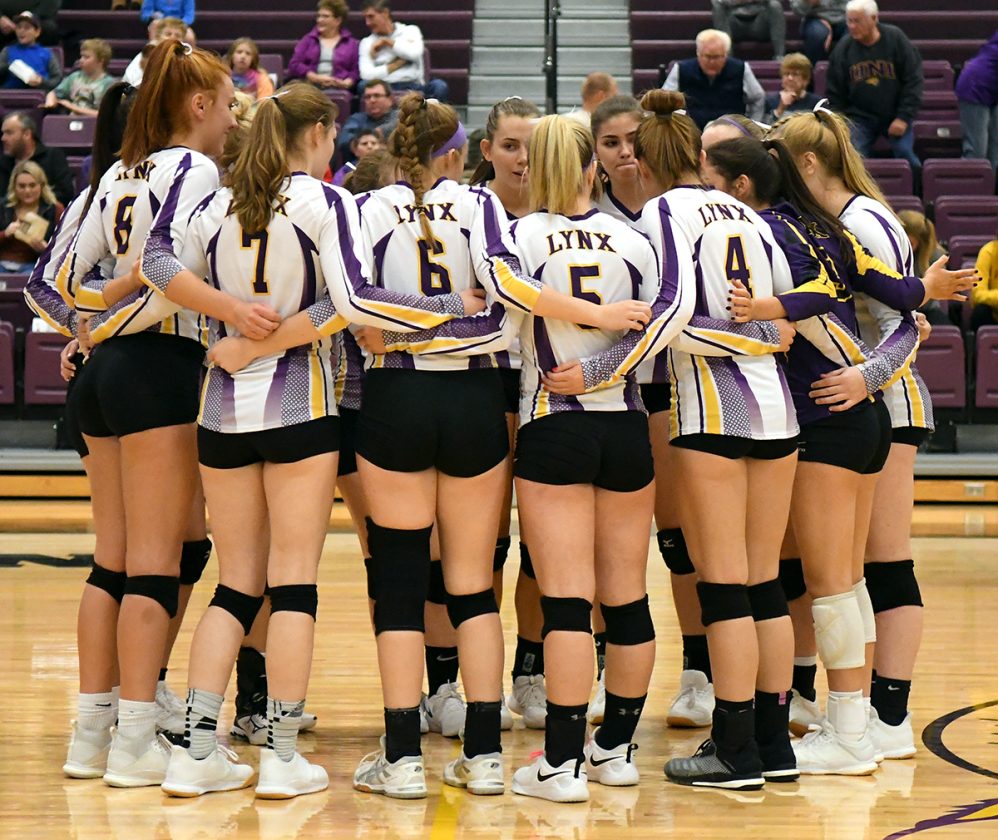 The WCHS volleyball team huddles on the floor minutes before it began its 3-0 sweep of Boone in a Class 4A regional quarterfinal. DFJ photo/Troy Banning

Alayna Finucan paced the Lynx defense with 15 digs, leaving the sophomore libero just 10 shy of becoming only the fourth player in program history to reach 1,000. Foster chipped in eight and Gallentine had seven.

Hoversten produced four of her blocks in the opening set, which saw WCHS close it out on a 5-1 run.

Hoversten ripped off four kills, and Foster and Rattenborg both had one to help the Lynx race out to an 11-1 lead in the second set, and that was all she wrote. Boone never got closer than eight points the remainder of the way, as Hoversten and Foster both laced four kills, and Anderson added three.

It was all academic from there. After two early ties in the third set, WCHS seized control with a 14-2 spurt that pushed the edge into double digits. Schwandt put up three kills in the set.

What awaits WCHS now is a chance to shock the world. Well, the state anyway.

The Lynx advanced to next Tuesday’s regional semifinal against fourth-ranked Waverly-Shell Rock (44-6) in Waverly.

“We just need to go into it like we did (last night) with a positive attitude,” Schwandt said. “We don’t need to look at records or stats or anything like that. We just want to go in on a level playing field.”

Faith Anderson blasts away from the outside during the second set of Webster City’s win over Boone last night. DFJ photo/Troy Banning

WCHS libero Alayna Finucan lunges for one of her 15 digs in the Lynx 3-0 win over Boone in a Class 4A Region 3 quarterfinal last night. DFJ photo/Troy Banning

The WCHS volleyball team huddles on the floor minutes before it began its 3-0 sweep of Boone in a Class 4A regional quarterfinal. DFJ photo/Troy Banning