SH builds 30-0 lead after one quarter, piles up 387 yards against winless Eagle Grove 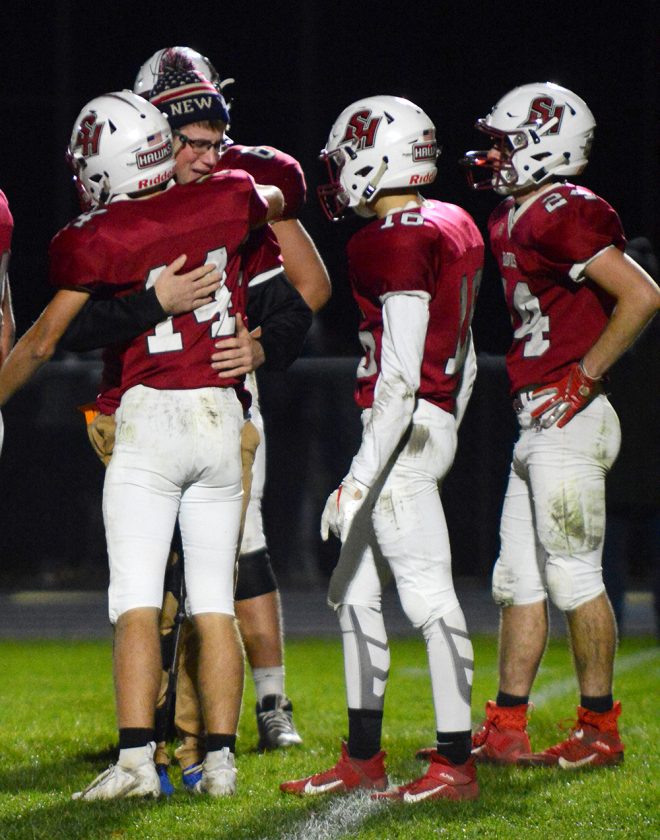 JEWELL — Senior Night turned into a game of name your score for the South Hamilton football team at Taylor Field on Friday.

Ahead 30-0 after 12 minutes, just how out of hand it got was really at the whim of Hawks’ head coach Corey Klemp on the final night of the regular season. Not surprisingly, the veteran leader quickly took his foot off the gas, as everyone in uniform got involved in South Hamilton’s 54-6 rout of winless Eagle Grove.

Nine different Hawks received at least one carry and 24 players were involved in at least one tackle. And the best statistic of all? Every single senior in uniform — Brandyn Feighner, Louis Galdeano, Sheldon Tapper, Cade Flaugh, Jeremiah Smith, Dawson Mueggenberg and Cade Balvanz — reached the end zone on either a touchdown or two-point conversion. Nathan Wilson, the only other senior on the team, had ACL surgery earlier this season.

Not a bad way to ride off into the sunset.

“It was a nice way to honor the seniors in their final home game,” Klemp said. “They’re a group that had to work for everything they got because they had some great classes above them. They continued to work and didn’t waver in their commitment to things, so I couldn’t be happier with the group of kids they are.” 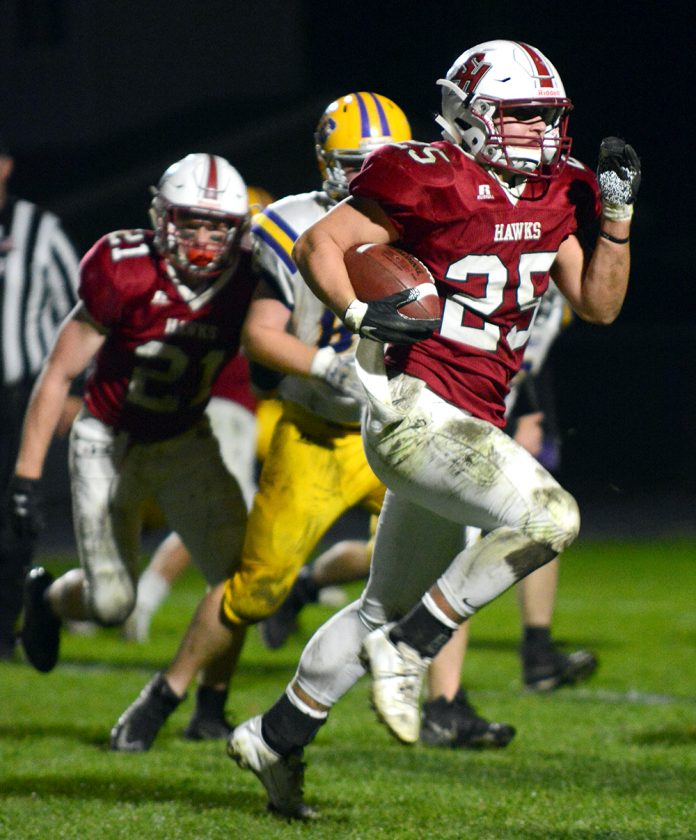 Klemp began to empty his bench in the second quarter, which allowed his starters to at least sniff the field after the intermission.

“We wanted to prolong things as long as we could while still being as sportsmanlike as we could,” he said. “Virtually everyone got a chance to get on the field and there was that kind of passing of the torch where those younger guys got a chance to play either with or in front of the seniors.

“It was a very emotional night for (the seniors) and you could definitely see it in their reactions as the third and fourth quarters rolled along. It was great to get the victory, but also really sad for them and everyone involved.”

South Hamilton (6-3), which missed the playoffs for the first time since 2016, out-gained Eagle Grove 387-144. The Hawks rushed for 326 yards and completed all four pass attempts for 61 more yards.

The starting backfield of Cade Flaugh, Brock Galetich and Trevor Thompson combined for 256 ground yards and five touchdowns. They averaged 11.6 yards per carry. 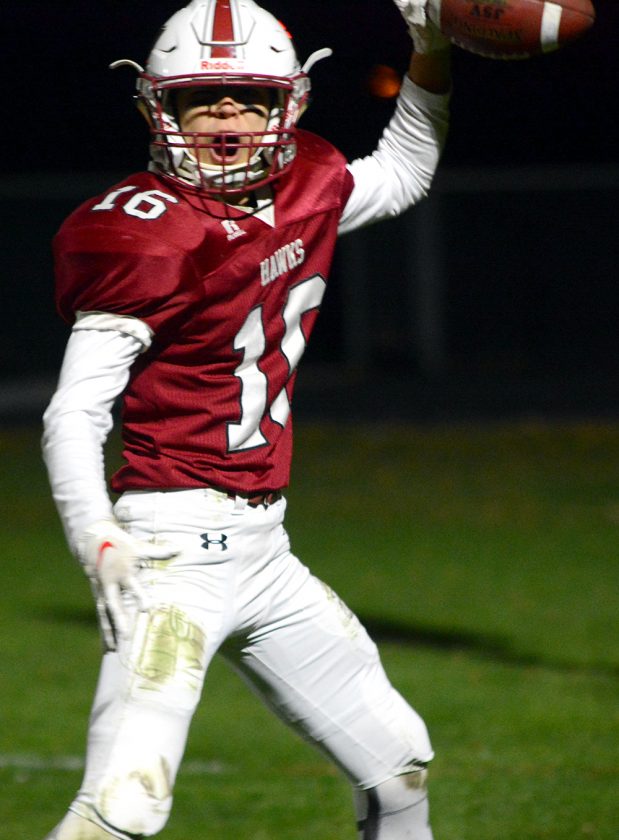 Flaugh rambled for 128 yards, giving him 1,165 on the season, which currently puts him No. 7 on the Class 1A leaderboard. Galetich galloped for 91 yards on just three carries, and Thompson added 37 yards.

Galetich, a junior who doubles as a defensive back, intercepted two more passes. He finished the campaign with nine, currently tied for the 1A lead with Sigourney-Keota’s Brady Duwa.

“It was tremendous that he made the plays he did all year long,” Klemp said of Galetich. “He studies the game and plays fearless. We throw him in a lot of situations where he covers the best receivers in man (coverage). People try to take advantage of that and end up getting hurt by it.”

The rout began on the second play of the game, as Feighner stepped in front of a pass by Eagle Grove quarterback Jake Darland and took it 25 yards to the house.

South Hamilton scored three more times in the final 5:30 of the period, starting with a Thompson 1-yard plunge into the end zone. Galetich capitalized on his first INT by taking a hand-off 28 yards for a score a few plays later, and following an Eagles’ fumble that was recovered by Thompson, Hawks’ quarterback Freddie Lewis connected with Feighner on an 8-yard TD pass. 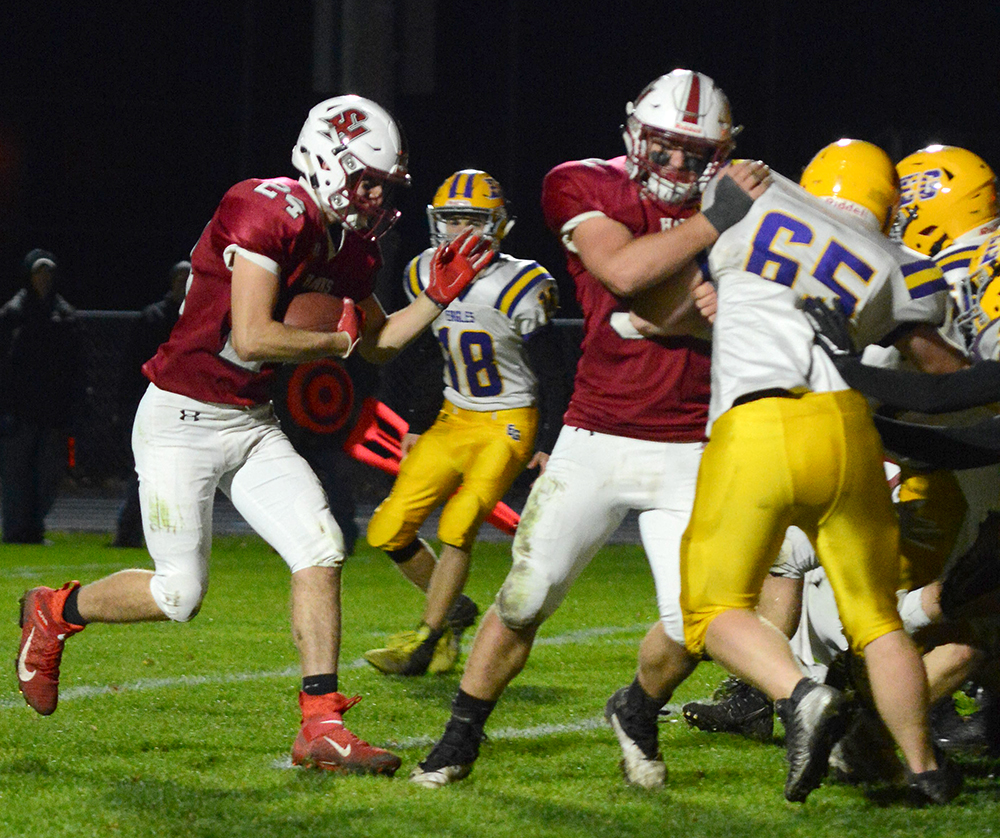 Flaugh scored on a 5-yard run with 2:54 remaining in the second quarter to extend the lead to 38-0. Eagle Grove (0-9), which has dropped 19 consecutive contests, reached the scoreboard just before the half on a 21-yard pass from Darland to Nick Huntley.

Galetich and Thompson scored on jaunts of 63 and 20 yards, respectively, in the third quarter.

Colton Willis also recovered a fumble and Jeremiah Smith had five tackles in the win. Thompson, Lane Swenson and Austin Busch all had 31⁄2 stops.

South Hamilton, the District 2 runner-up behind sixth-ranked and unbeaten South Central Calhoun (9-0), finished 19th in the final 1A RPI, one spot ahead of playoff qualifier Pella Christian, which advanced as a district champion. No. 16 Sigourney-Keota also missed the postseason despite an 8-1 record, as did Unity Christian (5-4) at No. 17.

“The frustrating thing for all teams is you don’t have control of your district and a lot of things change from year to year,” Klemp said. “So I don’t know what the best system is, but I do know that if you win all of your games you’re in and we didn’t do that.”

South Hamilton started the season 0-2, but won six of its final seven games.