Flaugh and Thompson both go over 100 yards; SH?in position to finish 2nd in Class 1A?District 2 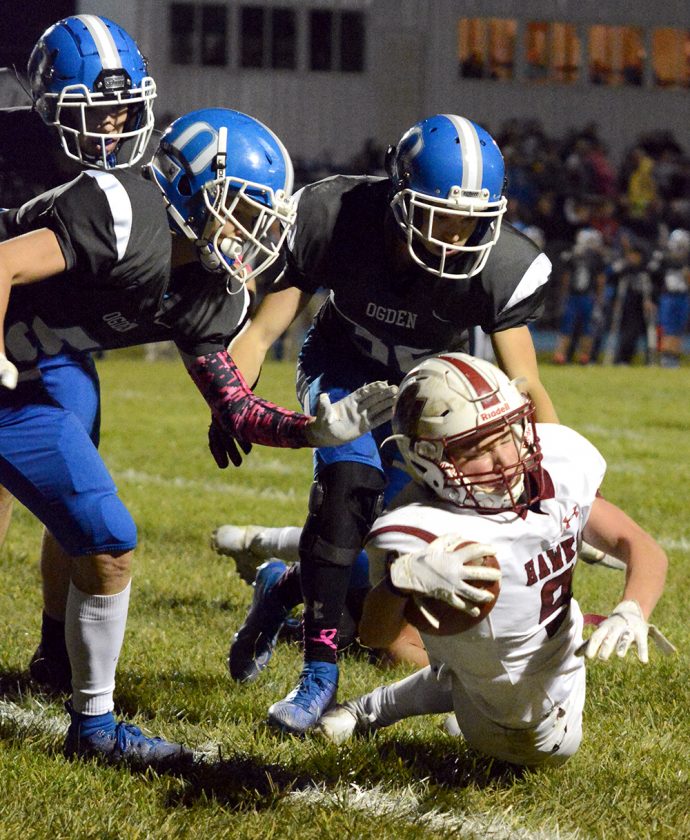 South Hamilton halfback Brock Galetich (9) stretches for the first down marker against Ogden on Friday. Galetich rushed for 58 yards and also collected his seventh interception, the second-most in Class 1A, in the Hawks 46-20 victory over the Bulldogs. DFJ photo/Tracy Queen

OGDEN — Just like a season ago, the South Hamilton football team has virtually assured itself of the runner-up position in Class 1A District 2 behind South Central Calhoun. But will it be enough to once again get the Hawks into the state playoffs?

What would it take for the Hawks to fall out of the No. 2 spot? For starters, they would have to lose to winless Eagle Grove, and Pocahontas Area would have to beat fifth-ranked South Central Calhoun in Week 9. Both scenarios seem unlikely.

Despite facing a loaded box and blitzing linebackers on seemingly every play, the Hawks still pounded out 405 rushing yards and controlled the clock to leave the Bulldogs in the rearview mirror. 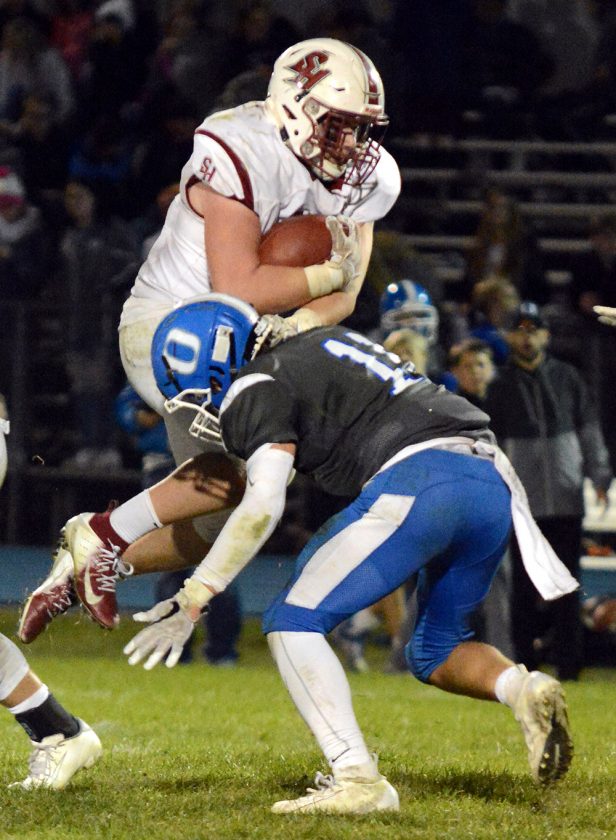 Fullback Cade Flaugh, the leading rusher in the district, ripped off 176 yards and three touchdowns, as he surpassed 1,000 yards on the season. Halfback Trevor Thompson had his way with the Bulldogs as well with 159 yards and three more scores. Throw in 58 yards from halfback Brock Galetich and 32 more from quarterback Freddie Lewis, and it’s pretty easy to see why South Hamilton cruised.

Hawks’ head coach Corey Klemp raved about his backs, but also acknowledged it was the work up front by the offensive line that arguably made the biggest difference.

“The offensive line played incredibly,” he said. “It’s no mystery who we are and what we like to do, so Ogden really brought a lot of pressure to try to stem off our run game a little bit. But the guys did an excellent job of communicating and picking things up.”

With 1,037 ground yards on the season, Flaugh leads the district by nearly 400 yards. In other words, he’ll be the district rushing champion.

“I couldn’t be more happy for him or proud of him,” Klemp said of Flaugh. “He’s a classic example of if you work your butt off good things will come. Over the course of four years he turned himself into a really good football player.” 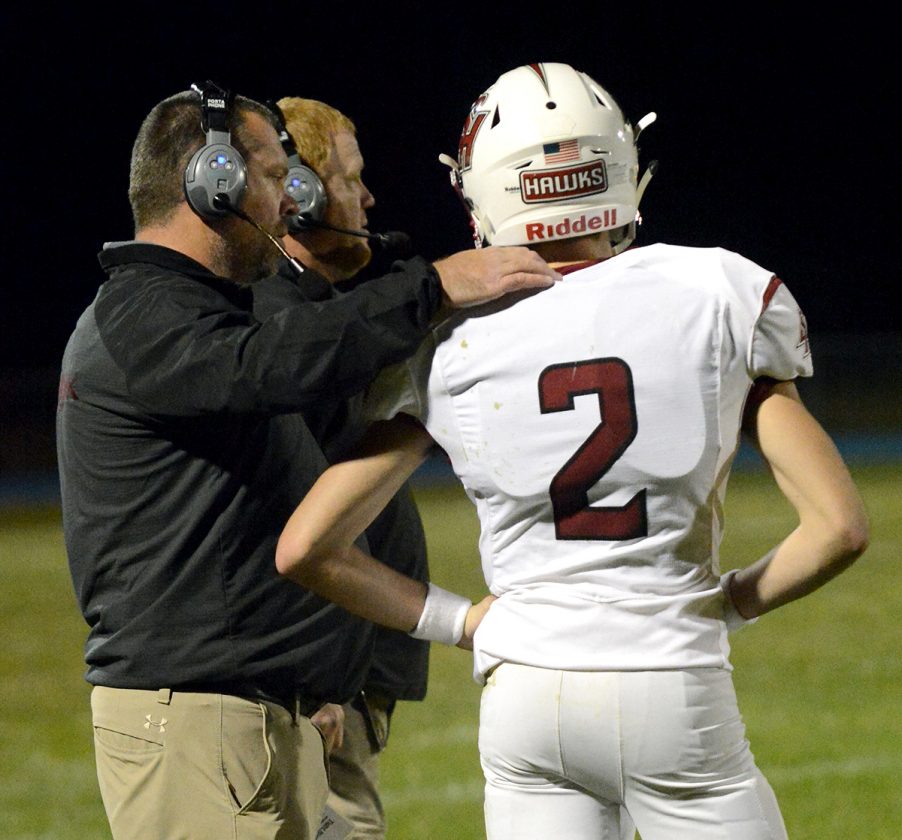 Ogden went the other way to move the ball down the field. South Hamilton plugged the running lanes — the Bulldogs rushed for only 8 yards — but talented quarterback Sam Christensen did 345 yards worth of damage through the air. He completed 23 of 49 passes and tossed three TDs, but he was intercepted once by Galetich, his seventh of the season to move the junior into the No. 2 spot in 1A.

“(Christensen) is just a tough kid and I told him that after the game. I was really impressed with him,” Klemp said. “We focused on forcing him to march the ball down the field and could they do it consistently?

“(Galetich) is a very good cover guy obviously and it’s a lot of preparation on his part. A lot of times teams usually will take their shots and he usually comes out on the winning side of things.”

Despite four first-half turnovers — three fumbles and an interception — South Hamilton still managed to take a 24-8 lead into the intermission. Thompson and Flaugh did all of the heavy lifting on the scores; Thompson found the end zone on runs of 28 and 3 yards, while Flaugh broke through on a 4-yard run.

Ogden closed to within 24-14 on a 7-yard TD toss from Christensen to Griffin Diggs early in the third quarter, but South Hamilton answered with three consecutive scores over the next 15 minutes to put the game out of reach.

Flaugh’s second TD from 4 yards out made it 32-14 after three quarters. He punched it in from the 1 midway through the fourth, and Thompson got free on a 17-yard gallop with 3:55 remaining to put the Bulldogs away.

Ogden scored late on an 11-yard pass from Christensen to Kolby Moorman to make the final outcome more respectable.

Even though it gave up yards, the Hawks’ defense still pestered Christensen throughout the contest. The Ogden QB was sacked six times; Flaugh had a team-high 21⁄2, while Dominic Summers had two and Jeremiah Smith one.

Austin Busch had 71⁄2 tackles to lead the way for South Hamilton. Thompson was in on 61⁄2 stops.

No. 25 in the 1A RPI a week ago, South Hamilton hopes to move up, potentially into playoff contention, when the new rankings are released later this week. The Hawks will close out the regular season against Eagle Grove (0-8, 0-4) at home on Friday. A win would put South Hamilton into wait mode to see if it will get a 10th game.

“Our mindset is still certainly that we have a chance,” Klemp said. “But if this is our last week, then we need to go through it as prepared and focused as any other week.”

Eagle Grove will step onto Taylor Field in Jewell Friday night looking to end an 18-game losing streak, a stretch that began with a 21-7 loss to South Hamilton in Week 9 of the 2017 season. The Eagles have been outscored 398-48 this season and have notched just one touchdown in district play.

South Hamilton halfback Brock Galetich (9) stretches for the first down marker against Ogden on Friday. Galetich rushed for 58 yards and also collected his seventh interception, the second-most in Class 1A, in the Hawks 46-20 victory over the Bulldogs. DFJ photo/Tracy Queen