HAVE A LITTLE FAITH

Anderson battles constant pain to be just one of the girls 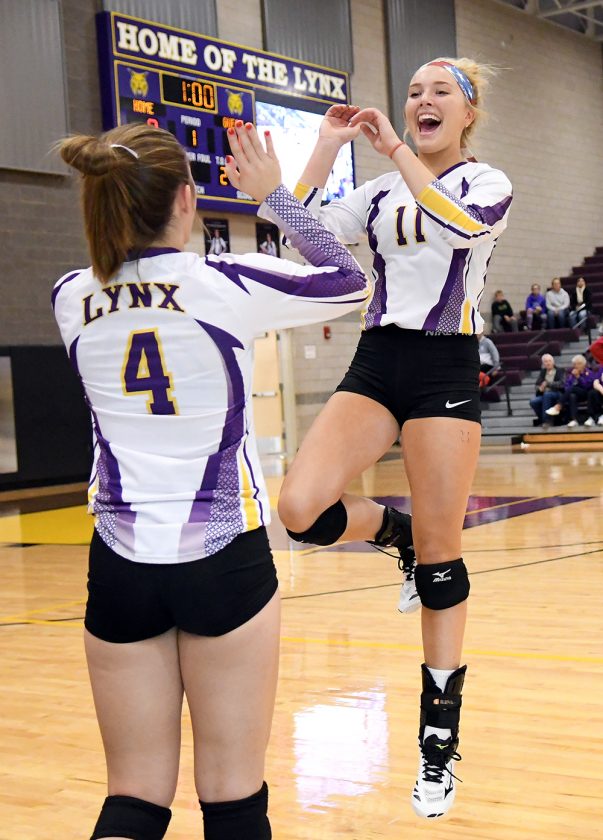 The pain is always present and it’s excruciating. At times it can be nagging, annoying really, but one simple misstep and it roars through her body like a lion tearing at flesh.

This is Faith Anderson’s life. Not some days, but every day. Minute after minute, hour after hour. It’s become a companion, one she desperately wants to run and hide from, but knows she can’t.

But the Webster City junior volleyball player doesn’t wallow in self-pity. She doesn’t cry either. In fact, she hates crying, almost as much as she hates the pain. Instead, she smiles. And she laughs. And she jokes with her teammates.

Why? She would ask you why not?

“The only way you can hurt her or her mother (Roxanne) is by hurting their feelings,” Al Anderson, Faith’s dad, said. “Being in sports myself and coaching sports … I’ll be honest, I couldn’t have coached somebody, I couldn’t have trained somebody to have a better outlook, attitude and effort. She’s my kid, but I’m in awe of it.” 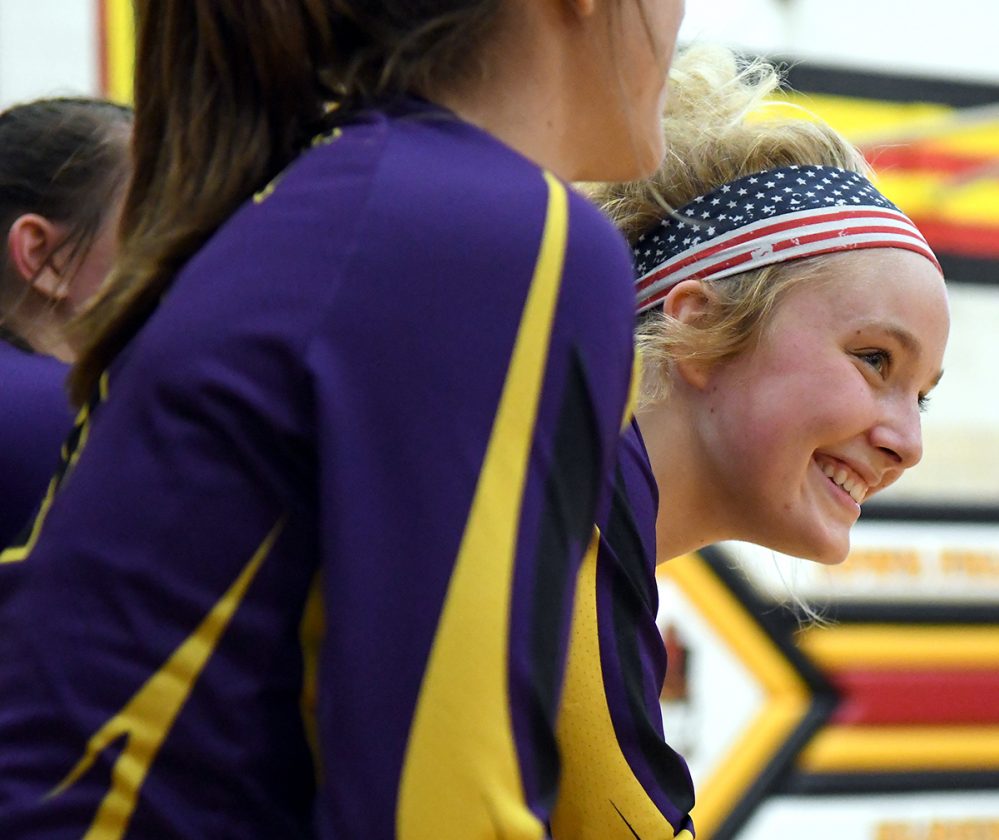 Whether she’s on the volleyball court or on the bench, in pain or not, one thing is always a constant with WCHS junior Faith Anderson: Her smile. DFJ photo/Troy Banning

Apparently, Faith ascribes to the “Dalton” theory, the character portrayed by Patrick Swayze in the movie Roadhouse: Pain don’t hurt.

Seriously though, Faith has a lot of faith — in herself, in her family and in her teammates. She steps onto the court with her trademark stars and stripes headband perfectly situated and she goes to work. She offers encouragement. She takes on the role of cheerleader when she heads to the bench.

Win or lose, Faith walks away with a positive outlook, a we’ll-get-them-next-time mentality. That’s just her make-up and how she was raised, but it’s also because she sees every chance to compete as a gift.

“I’m not even supposed to be out here,” Faith said after she helped WCHS dismantle Boone in three sets in a Class 4A Region 3 quarterfinal match last Wednesday evening. “But I wanted to be out there because I love my teammates and all the girls out here. I really couldn’t imagine playing with anybody else.”

Just to play, that’s all she has ever wanted. But 10 months ago, that seemed like a fairytale. 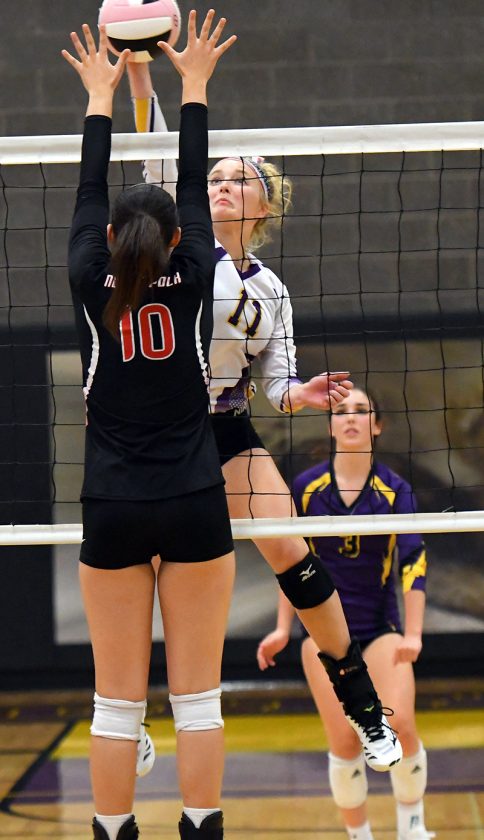 Webster City attacker Faith Anderson (11) slaps a kill from the middle of the floor against North Polk earlier this season. She takes 58 kills into tonight’s Class 4A Region 3 semifinal match against Waverly-Shell Rock in Waverly. DFJ photo/Troy Banning

The youngest of four children — brother Jordan and sister Summer graduated from Northeast Hamilton High School in 2008 and 2010, respectively, followed by sister Andi, a 2016 WCHS graduate — Faith has long been the butt of a family joke.

You see, Faith didn’t walk like everyone else. Her feet would pivot out with each step and her older siblings quickly took notice.

“When I was younger I would always stand with both of my feet out and my sisters and brother would say, ‘Faith, you’re standing like a duck. Quit it.’ It was constant,” Faith said.

It wasn’t until years later that the Anderson family learned why Faith stood and walked different from everyone else. 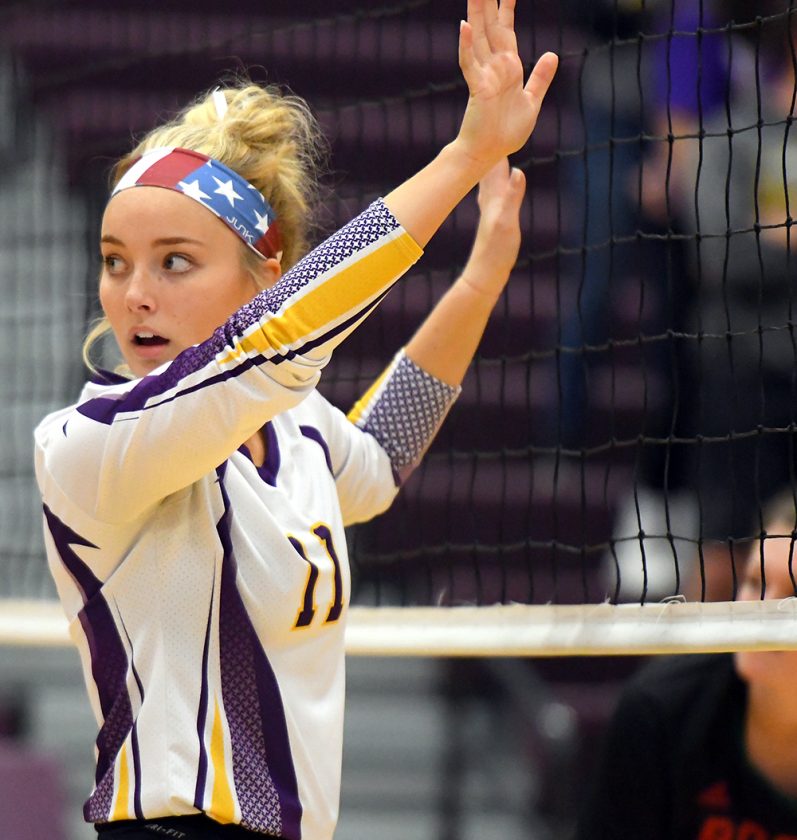 Standing at net, Faith Anderson looks back to watch the serve during a Webster City match this season. DFJ photo/Troy Banning

Hip dysplasia. In medical terms, that’s where there is insufficient coverage for the femoral head (ball) by an excessively shallow hip socket.

Normally, a person’s hips tilt forward, but Faith’s go in the opposite direction — backwards. It explains her walk, and it also explains why, as she grew older, the pain became unbearable. It got to the point where even the most basic functions — things kids take for granted on a daily basis — grew burdensome.

Her older sister, Andi, had also experienced hip issues — a torn labrum that was fixed with laparoscopic surgery while she was in high school. At first, doctors felt Faith was suffering from the same affliction and so she had the same surgery in the summer of 2017.

But Faith’s ailment proved to be much worse.

The Anderson family eventually found their way to the Mayo Clinic in Rochester, Minn., and after several consultations with teams of doctors, it was decided that Faith needed to undergo a periacetabular osteotomy (PAO) on her right hip and a femoral osteotomy last December.

To keep it simple, Roxanne described the seven-hour procedure this way:

“They laid her on her back and did the PAO … they cut her hip socket away from her pelvis and then repositioned it and screwed it into place,” she said. “Then (for the femoral osteotomy) they rolled her onto her side and cut her femur in half and then rotated the ball 20 degrees — that was the maximum the doctor said he could go — to fit into the socket.”

It’s sort of like Humpty Dumpty — broken into pieces, only to put her back together again. To this day, Faith walks around with 3 31⁄2-inch screws in her pelvis, as well as a plate and seven screws in her femur. She also has a 12- to 14-inch scar up the side of her thigh that serves as a daily reminder of everything she’s endured.

But the difference was noticeable immediately.

“We could tell the difference the minute they brought her back to the room,” Roxanne said. “We looked at her feet and her left foot was way off to the side like it’s always been, but her right foot was perfectly straight up and down.”

Sounds painful, right? Faith admits that it was, and the recovery, that wasn’t easy either. In normal situations, doctors told Faith it would take a year to recover. She did it in six months, at least enough to resume normal activities.

Like sports — a family passion for as long as she can remember.

“It wasn’t easy obviously,” Faith, who was on crutches for nine weeks following the surgery, said. “You basically have to relearn how to walk because of all the new rotations and your body isn’t used to it. I’m still not completely put back together, so the recovery is still going on.”

But here’s the thing you need to know about Faith — if she says she’s going to do something, she does it. She decided she wanted to be ready in time to play volleyball this fall, and on the first day of practice, there she was.

“I don’t think there are many kids that could handle that much pain,” WCHS head volleyball coach Jess Howard said. “She’s got the best work ethic that you could ask for out of any athlete and the other players feed off her. When she’s up, they’re up and there’s not many times that she’s down.”

It would be easy for Faith to ask the question that almost everyone else would: Why me? And yet she fights those urges and instead focuses on the things she has rather than those she doesn’t.

“She realizes there are people who are going through way worse than she is,” Al Anderson said. “She’s not one to ever complain or dwell on things … she’s blessed enough on how healthy she is otherwise, so she’ll never feel sorry for herself.”

The volleyball season that wouldn’t have otherwise happened for most athletes has been a blast, Faith says. In the Lynx starting lineup since the opener, she’s laced 58 kills for a 19-16 team that will play David to fourth-ranked Waverly-Shell Rock’s Goliath in tonight’s 4A Region 3 semifinal round in Waverly at 7 p.m.

But it’s not the wins that Faith cherishes. It’s not the kills or the digs either. Rather, it’s about being a part of the team, just one of the girls. That’s all she’s ever wanted.

“I just love playing with all of the girls and they’ve all definitely been there for me,” Faith said. “Even after I came home, they would come and see me and it was very meaningful.”

Faith knows her first love, basketball, isn’t in the cards since lateral movement is simply too much to bear. But she plans to be back on the softball diamond next summer, as well as the volleyball court next fall before she takes one more turn on the operating table.

Yep, she has to go through this all again, this time on her left hip.

“I have good days and bad days with (the left hip), especially with the weather getting colder,” Faith said. “It’s definitely an old woman sentence for me to say, but weather definitely plays a factor.”

Faith’s left hip doesn’t tilt as far back as her right hip did prior to surgery, so she’s hopeful the rotation won’t be as severe and the recovery not as intense.

“I want to do it after my senior year of volleyball and if everything goes as well as it did with (the right hip) then I could possibly be back for softball,” she said. “Because not playing would hurt worse than anything.”

Because not playing would hurt worse than anything.

Hips not withstanding, it many ways Faith Anderson is just too good to be true.

Webster City at No. 4 Waverly-Shell Rock

What: Class 4A Region 3 Semifinal.

Next: The winner will advance to the regional final next Monday against either Ballard or No. 9 Dallas Center-Grimes. Location to be determined.

Standing at net, Faith Anderson looks back to watch the serve during a Webster City match this season. DFJ photo/Troy Banning

Webster City attacker Faith Anderson (11) slaps a kill from the middle of the floor against North Polk earlier this season. She takes 58 kills into tonight’s Class 4A Region 3 semifinal match against Waverly-Shell Rock in Waverly. DFJ photo/Troy Banning

Whether she’s on the volleyball court or on the bench, in pain or not, one thing is always a constant with WCHS junior Faith Anderson: Her smile. DFJ photo/Troy Banning