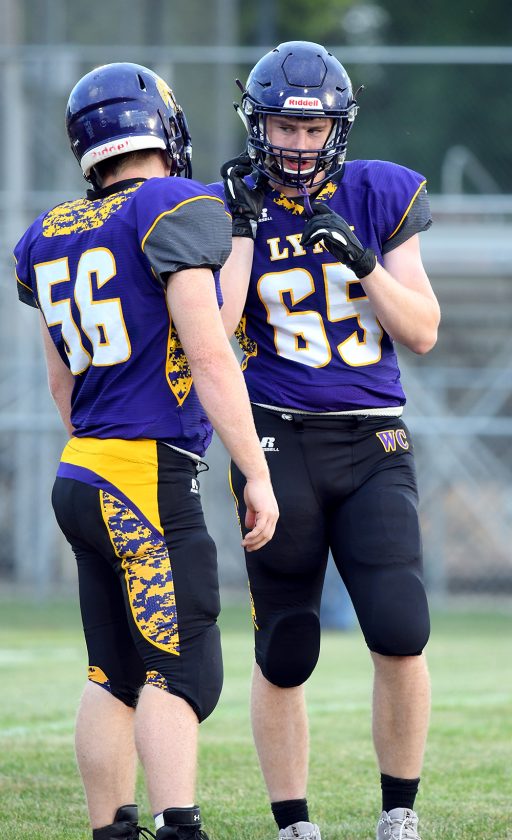 WCHS seniors Alex Ford (56) and Will Tasler (65) chat on the field prior to kickoff against Gilbert last Friday. It was the first game for Tasler in two years. He missed the entire 2018 season after he suffered a ruptured abdominal cyst during preseason practice. DFJ photo/Troy Banning

WEBSTER CITY — Everyone laughed. His coaches, his teammates, even Will Tasler himself found it funny.

It was 24 hours prior to the start of the 2018 football campaign and Webster City was running through its kickoff coverage in preparation for its season opener against Gilbert. As he sprinted down the field, Tasler, then a junior, tripped right into teammate Trey Mathis and landed flat on his belly.

Harmless, right? Tasler thought so, which is why he chuckled as he got back to his feet. And that was that, or so he thought.

No one was laughing five minutes later though as Tasler laid on the ground clutching his abdomen. The lanky kid who was penciled in as a starter was in excruciating pain and no one — not WCHS head coach Bob Howard, not any of the assistant coaches and not Tasler himself — knew why.

“It was very scary,” Howard said. “The thing was, when it happened, we gave him and Mathis crap because they tripped into each other. But it was maybe three or four minutes later and (Tasler) was in extreme pain and already turning white. I was pretty convinced he had ruptured his spleen with the way he acted and the pain that was involved.” 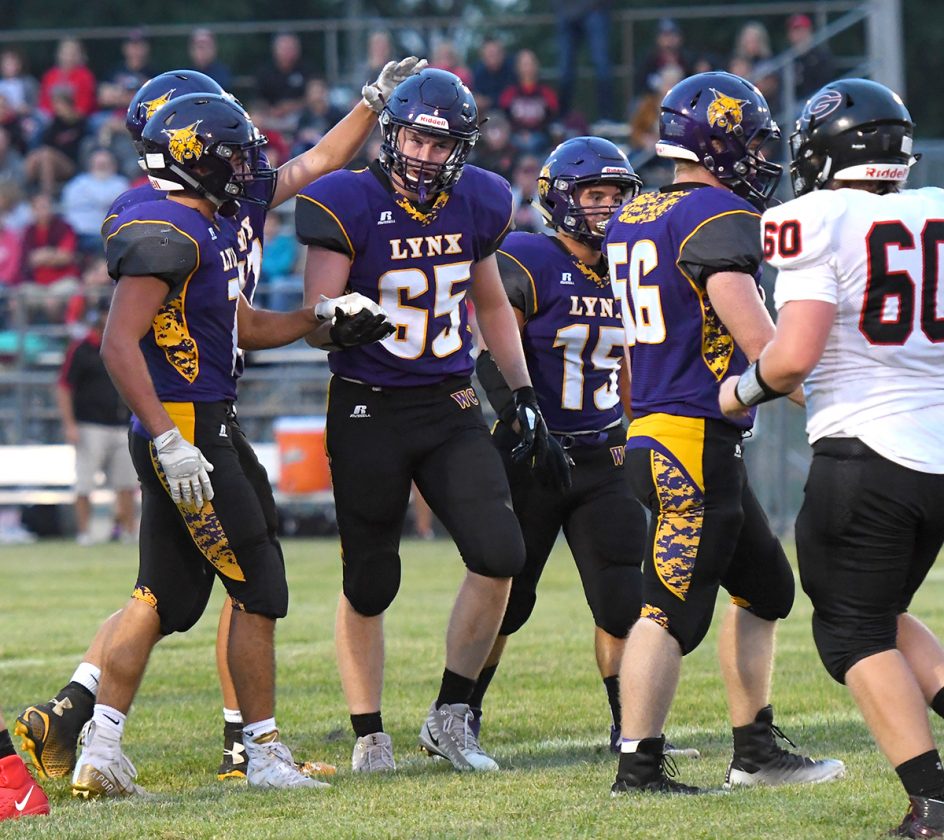 WCHS senior defensive end Will Tasler (65) is congratulated after a tackle for loss during last Friday’s 33-20 victory over Gilbert. DFJ photo/Troy Banning

Lynx assistant coach Chad Hisler quickly got Tasler to the car and headed to the Van Diest Medical Center, and not even an hour later Tasler and his parents were bound for MercyOne Medical Center in Des Moines.

Tasler’s spleen was fine. He was carrying an unnecessary five pounds though.

Upon his arrival at Mercy, doctors discovered a five-pound cyst in Tasler’s abdomen, likely there since birth. The collision with Mathis caused the cyst — twisted almost like a balloon animal inside his stomach — to rupture and spill what was essentially stomach acid into his abdomen.

“They told me it had been growing there pretty much my whole life,” Tasler said. “I was pretty bummed because I knew my season was over. They told me it was a freak thing, super rare.”

Tasler dropped 20 pounds and was forced to watch the entire season from the sideline, a difficult thing for both player and coach. 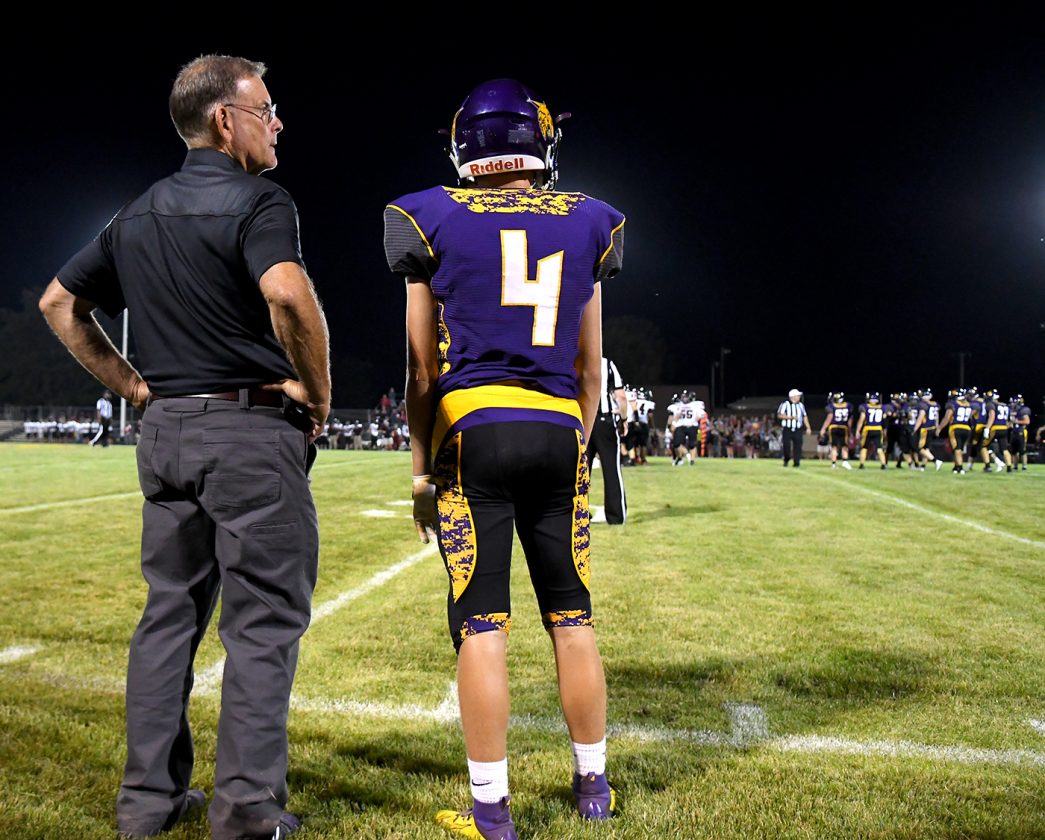 WCHS head coach Bob Howard (left) takes a look at the clock as he prepares to send a play onto the field with wide receiver Carter Neuroth (4) last Friday night. The Lynx will be on the road against Spencer at 7 p.m. this evening. DFJ photo/Troy Banning

“It was really hard to watch last season and not be out there to help my team when they were in tough situations,” Tasler said. “But I just had to cheer them on.”

“He would have been a two-year starter, so it was a really big loss for us,” Howard said.

Tasler was forced to miss the entire basketball season as well while he recuperated and added weight back onto his frame. He was finally able to return to competition on the soccer pitch last spring and began preparations for his senior year.

Now close to 200 pounds and cyst-free, the soft-spoken and 6-foot-3 Tasler is a key figure on both sides of the ball for WCHS. At strong guard, he was arguably the most imposing figure on an offensive line that gashed Gilbert’s defense, particularly in the first half, in the Lynx 33-20 victory last Friday. He also started at defensive end and helped to shut down the Tigers’ ground game.

“He’s now one of our strongest kids and I thought he played really well offensively and defensively the other night for his first ballgame,” Howard said of Tasler. “He worked awful hard in the offseason to get back.”

The win was the icing on top of the cake. But the real victory for Tasler was putting on the helmet again.

“It feels great playing out here again,” Tasler said. “I’ve put that hard work in and now it’s paying off.”

Tasler will be back in the starting lineup this evening when WCHS (1-0) treks to Spencer for a 7 p.m. kickoff. Spencer (0-1) is coming off a 39-21 loss to fourth-ranked (Class 2A) Spirit Lake in Week 1, but the Lynx will have their hands full against an opponent that will own a massive size advantage.

Spencer returns two key skill players from a season ago and both gutted WCHS in the Tigers’ 28-14 victory 12 months ago.

Fullback Isaiah Spencer led 3A in rushing in 2018 with 1,533 yards, 218 of which came on 29 carries in the win over WCHS. Quarterback Gage Garnatz did plenty of damage as well with 149 ground yards against the Lynx.

Spencer and Garnatz both averaged 7.5 yards per carry in last season’s meeting. Yes, both are talented, but it’s Spencer’s triple-option attack under head coach Jim Tighe, a WCHS graduate and the son of Hall of Fame coach Dick Tighe, that drives the bus.

“It’s a challenge because it’s hard to simulate in practice, just like it’s hard to simulate our offense,” Howard said. “This is the fullback and quarterback both back on a team that’s running essentially the wishbone and they know what they’re doing. They’re very well coached and very well versed in it. But we prepared better (in practice on Tuesday) than we ever did last year.”

Priority No. 1 for WCHS will be ball security, something that was a glaring problem against Gilbert. The Lynx piled up six fumbles — they lost two of them — and turned the ball over three times in all. The butterfingers stopped several second-half drives before they could even begin and led to just 25 yards of offense over the final 24 minutes.

“You can’t run offense putting the ball on the ground every fourth or fifth play,” Howard said.

Lynx wingback Garrett Whitmore and tailback Trey Mathis both rushed for more than 90 yards in Week 1. Mathis also had nine tackles at linebacker; he intercepted Garnatz and returned it 40 yards for a touchdown in last year’s game.

WCHS seniors Alex Ford (56) and Will Tasler (65) chat on the field prior to kickoff against Gilbert last Friday. It was the first game for Tasler in two years. He missed the entire 2018 season after he suffered a ruptured abdominal cyst during preseason practice. DFJ photo/Troy Banning

WCHS head coach Bob Howard (left) takes a look at the clock as he prepares to send a play onto the field with wide receiver Carter Neuroth (4) last Friday night. The Lynx will be on the road against Spencer at 7 p.m. this evening. DFJ photo/Troy Banning

WCHS senior defensive end Will Tasler (65) is congratulated after a tackle for loss during last Friday’s 33-20 victory over Gilbert. DFJ photo/Troy Banning