On the court for first time in 9 days, Lynx take out Hampton-Dumont/CAL?in 4 sets 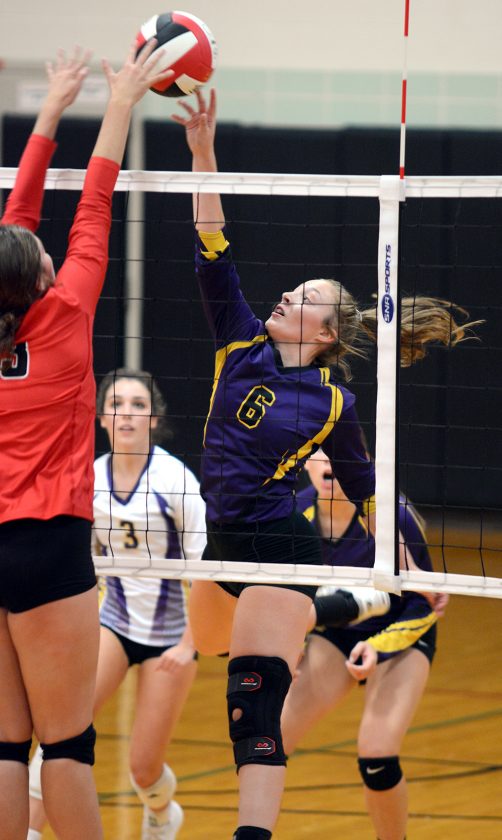 Morgan Gallentine (6) goes across the court with an attack during Webster City’s 3-1 win over Hampton-Dumont/CAL last night. DFJ photo/Tracy Queen

HAMPTON — It might have taken a few points to kick the rust off the tires, and there was also a Set 4 hiccup, but for the most part the Webster City volleyball team did what it wanted in its first match in nine days here last night.

“In the first game, you could tell we hadn’t been on the court in a week, but the girls found their rhythm once we got into it,” WCHS head coach Jess Howard said. “Game 3 got away from us a little bit, but it was due to a slow start. We came back strong in Game 4 and controlled the tempo.”

With hopes of contending for a conference championship, WCHS knows it cannot afford to slip again. Howard was happy to see her crew hang together and put the Bulldogs (5-4, 0-3 NCC) away before it reached the fifth set race to 15.

“It’s a one and done situation (in the conference) where you only get one chance at them,” she said. “We did a good job of controlling the games we won.” 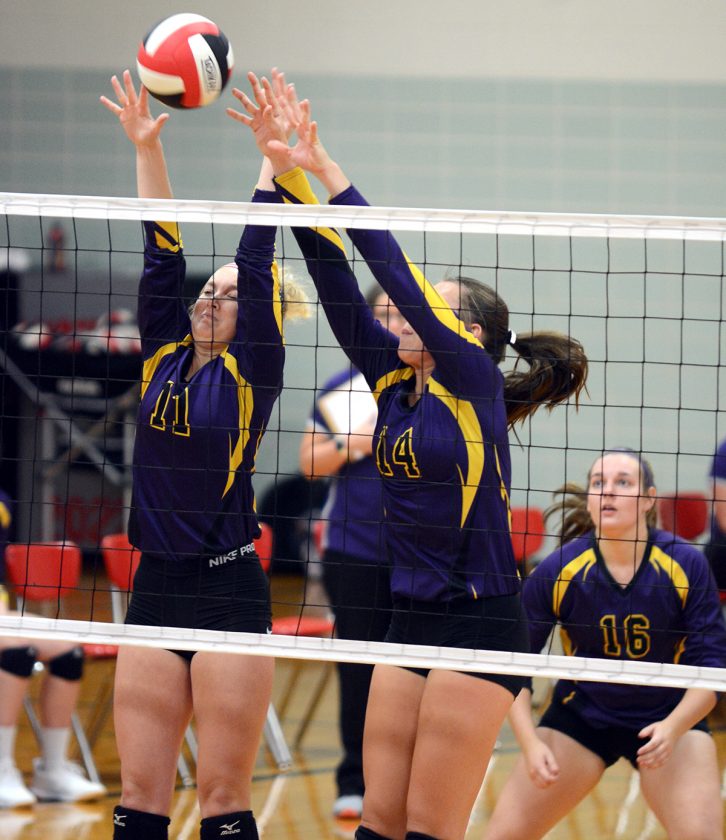 Faith Anderson (11) and Adalie Schwandt (14) climb the net looking for a block for Webster City in its 3-1 North Central Conference victory over Hampton-Dumont/CAL last night in Hampton. DFJ photo/Tracy Queen

WCHS relied on a trio of hitters to turn back Hampton-Dumont/CAL. Adalie Schwandt, Grace Hoversten and Morgan Gallentine combined to swat 29 kills and hit .315. Schwandt was dominant from the middle with 13 kills. Hoversten, who also played in the middle, laced nine and Gallentine finished with seven in split duty between attacker and setter positions.

“They did a great job of being a force at net both offensively and defensively,” Howard said, noting Schwandt and Hoversten combined for 101⁄2 blocks as well. “We kind of let the middles decide where they were going to hit from and they did a good job of keeping the defense on their toes.”

Schwandt also registered 10 digs and dropped in a pair of service aces, and Gallentine handed out 14 assists, just two behind Jenna Miller’s team-high 16.

WCHS struggled behind the service line with nine errors, nine more than Howard ever likes to see.

The Lynx will travel north for the Forest City Invite on Saturday. They’ll open the day against Spencer at 10 a.m., and they’ll also meet Hampton-Dumont/CAL once again. Also on the schedule will be matches against Roland-Story, Lake Mills and St. Ansgar.

Morgan Gallentine (6) goes across the court with an attack during Webster City’s 3-1 win over Hampton-Dumont/CAL last night. DFJ photo/Tracy Queen

Faith Anderson (11) and Adalie Schwandt (14) climb the net looking for a block for Webster City in its 3-1 North Central Conference victory over Hampton-Dumont/CAL last night in Hampton. DFJ photo/Tracy Queen