No. 9 Spartans gouge Hawks for 415 yards in rout

SH continues to struggle with hanging onto the ball, now 0-2 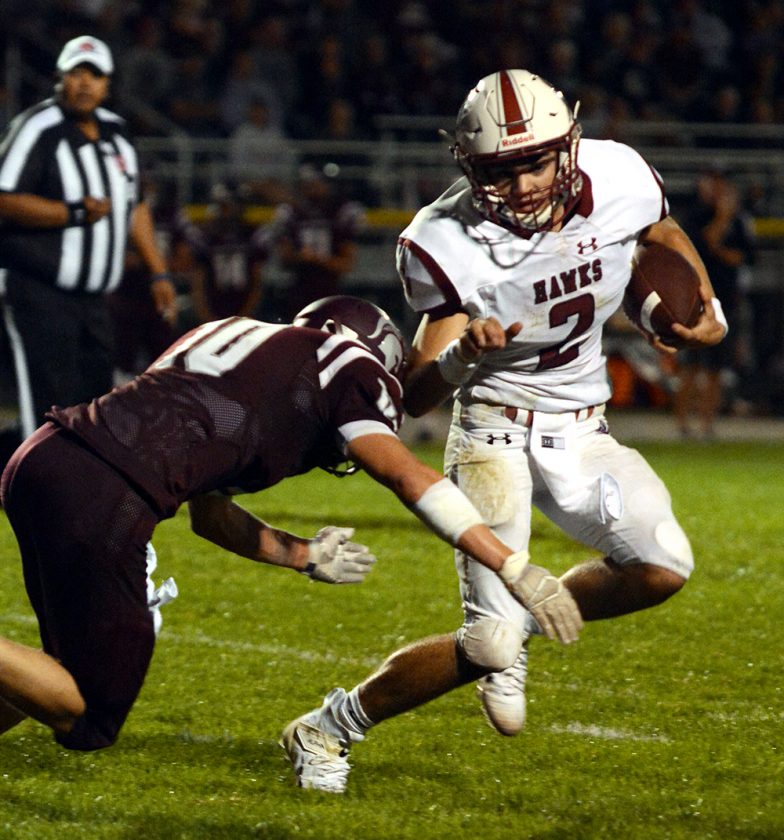 GRUNDY CENTER — It took Logan Knaack less than three minutes to leave a lasting impression on the South Hamilton defense here Friday night. And from there, he had the Hawks reeling.

Knaack, Grundy Center’s dynamic sophomore quarterback, kept the ball on an option and sprinted around the end for a 69-yard touchdown run in the first quarter and it ignited an offensive clinic by the ninth-ranked (Class A) Spartans, who manhandled South Hamilton, 40-6, in non-district play.

Knaack accounted for 223 yards of total offense — 137 passing and 97 rushing — against a Hawks’ defense that is used to delivering the punishment rather than the other way around. Spartans’ tailback Zach Opheim ripped off 176 rushing yards as well.

“(Knaack) was the athlete we thought he was and (Opheim) was just a real nice runner. He had good speed and he found ways to make little cutback lanes,” South Hamilton head coach Corey Klemp said. “Up front they were very physical, I think more so than what we expected and that’s a credit to them. They had a couple big plays, but it was some of those mid-range ones that hurt us.”

Grundy Center (2-0) finished with 415 yards, the most South Hamilton has allowed since Van Meter accrued 419 in a 42-0 victory nearly two years ago. 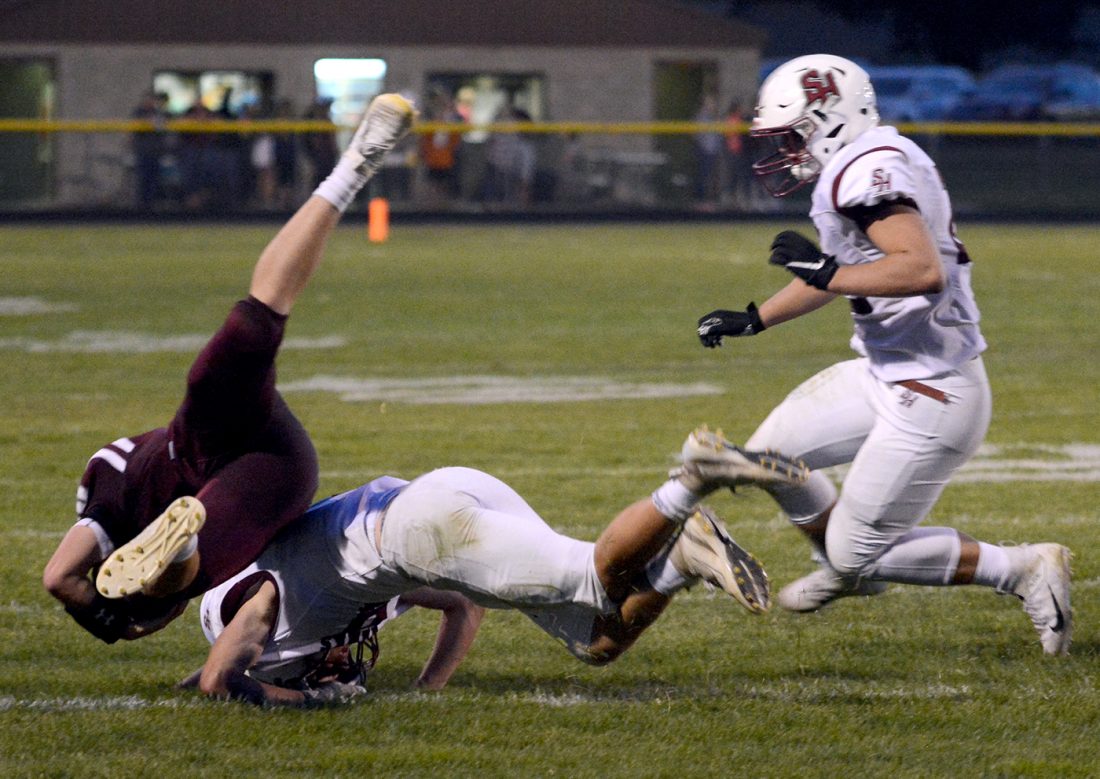 South Hamilton’s Brock Galetich (center) throws his shoulder into Grundy Center quarterback Logan Knaack and takes Knaack off his feet during Friday’s Week 2 game in Grundy Center. Knaack did damage with his feet and arm in a 40-6 Spartans’ win. DFJ photo/Tracy Queen

It didn’t help that the Hawks (0-2) were hit hard by the injury bug. Defensive tackle Jeremiah Smith, the reigning 1A District 2 Defensive Player of the Year, was limited with a shoulder injury. Trevor Thompson, the team’s middle linebacker and starting halfback, missed most of the second half and fellow defensive lineman and tight end Cade Balvanz went to the sideline early in the fourth quarter.

Injuries or no injuries, Knaack had the Hawks’ number and Klemp went back to the first-quarter touchdown as the eye opener.

“That very first series, where he pulled it out and went around the defensive end, that had a really lasting effect throughout the game,” Klemp said. “The injuries caused us to move personnel around a lot too and we had to adjust for that.”

Knaack rushed for two touchdowns and threw for a third. Opheim also broke off a pair of scoring jaunts that covered 32 and 23 yards. Their exploits allowed the Spartans to take a 19-0 lead into the intermission.

South Hamilton got a quick stop early in the third and then marched the ball down to the Grundy Center 6-yard line. But the Hawks were unable to generate any points, something that has continually been a problem early in the season. 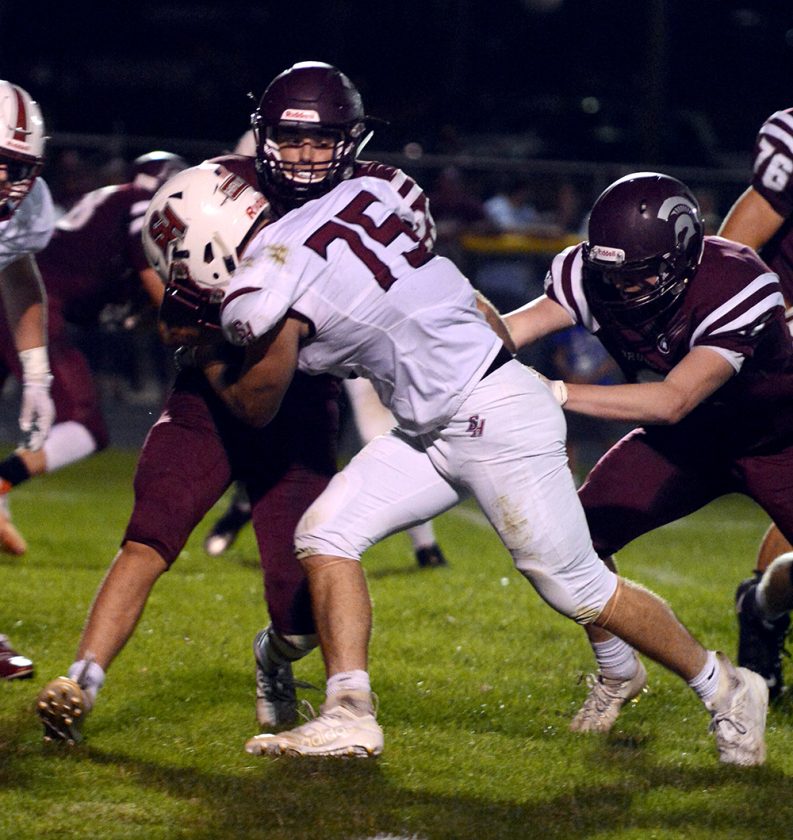 “We haven’t found that mental toughness yet that we have to have to score in those pivotal situations,” Klemp said.

Turnovers, four in all, also contributed to South Hamilton’s woes.

The Hawks compiled 226 yards of offense, 60 of which came on one play — a third-quarter 60-yard touchdown pass from quarterback Freddie Lewis to wide receiver Brandyn Feighner. Lewis completed 4 of 14 passes for 89 yards on the night, while Feighner caught three of them for 77 yards.

Dominic Summers led the Hawks’ defense with 61⁄2 tackles and Thompson had 51⁄2. Knaack’s only mistake of the night resulted in an interception for Brock Galetich. 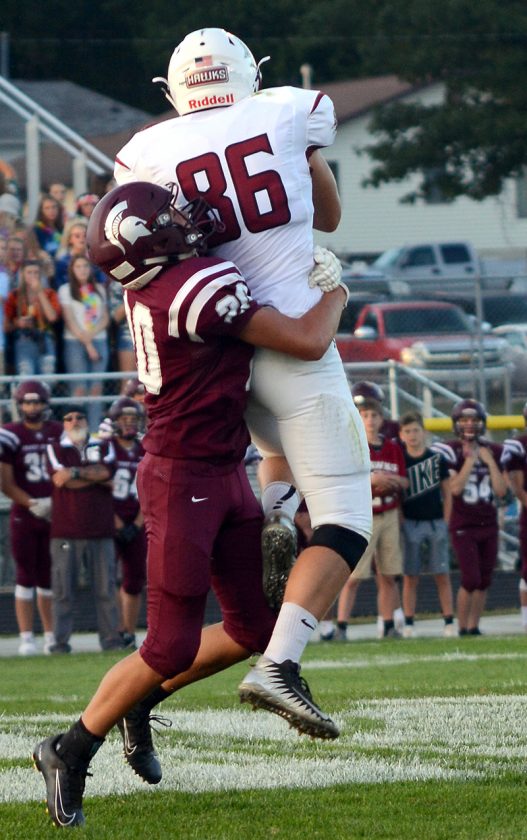 Dating back to the 1A state playoffs last fall, South Hamilton has dropped three straight games, its longest skid since midway through the 2016 season. Klemp knows the struggles are weighing on his players and it won’t get any easier this week against Woodward-Granger (2-0), but he’s confident this group can turn it around.

“The culture has shifted here where they expect to win,” Klemp said. “They’re down, but they’re not out. We have great upperclassmen who are going to get us through this. They just have to block out the outside noise, keep working and keep believing.”

South Hamilton’s Brock Galetich (center) throws his shoulder into Grundy Center quarterback Logan Knaack and takes Knaack off his feet during Friday’s Week 2 game in Grundy Center. Knaack did damage with his feet and arm in a 40-6 Spartans’ win. DFJ photo/Tracy Queen