SH the favorite in 1A District 2 opener 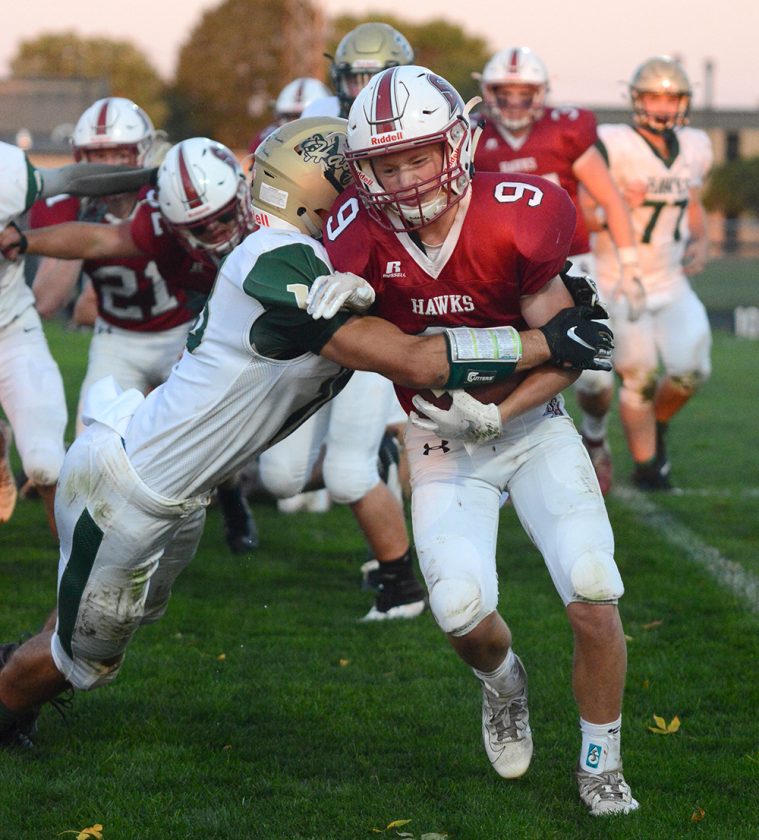 South Hamilton halfback Brock Galetich (9) is hit on a run to the outside against Woodward-Granger earlier this month. DFJ photo/Tracy Queen

JEWELL — South Hamilton will begin its Class 1A District 2 journey this evening on the road against Madrid.

Coming off back-to-back wins over Woodward-Granger and Manson-Northwest Webster, the Hawks (2-2) will be out to take what they hope will be a first step towards a third consecutive state playoffs appearance.

“It’s certainly good to have some momentum turn back in our favor heading into district play,” South Hamilton head coach Corey Klemp said of the two-game win streak. “We’ve put ourselves in a situation where every game is pivotal.”

Madrid (0-4), meanwhile, will attempt to win a game on the field for the first time since Oct. 13, 2017 when it knocked off Manson-Northwest Webster. The Tigers have dropped 13 consecutive contested games, although they earned a forfeit victory over Eagle Grove a season ago.

To stay in the playoff picture, South Hamilton knows it can’t have a slip up, not with sixth-ranked South Central Calhoun (4-0) on the horizon.

Bruising fullback Cade Flaugh has been the centerpiece of the Hawks’ offense and he enters tonight with 459 yards and six touchdowns on the season. Halfback Trevor Thompson is also expected to return following a two-game absence due to a high ankle sprain; Thompson was the team’s leading rusher following Week 2 with 157 yards. Fellow halfback Brock Galetich (185 yards) is also a weapon.

South Hamilton’s defense has been stingy, allowing just 20 points in the last two games. It will face a Madrid offense that didn’t reach the scoreboard until last week. The Tigers have been outscored 209-15 so far this season.